MADRID/BARCELONA - When Chinese billionaire Jack Ma took a trip to Spain's Mallorca island last month, much was made of it being his first foreign foray since a 2020 fallout with regulators had clipped his wings.

However, Ma's sunny sojourn on his newly-built 88-metre (289 ft) cruise boat Zen - estimated to be worth $200 million (S$270 million) - also put a spotlight on a global trend: the return of the superyacht.

As the number of billionaires grows and Covid-19 has added to incentives for avoiding crowds, the multi-billion-dollar global luxury boat industry is rebounding fast after near-paralysis at the onset of the pandemic.

"2021 is significantly outperforming any of the last 12 years," said brokers Fraser Yachts.

Sales of luxury vessels longer than 30 meters (98 ft) rose over 8per cent in the first nine months of 2021 from the same period of 2019 pre-pandemic, according to industry publication the Superyacht Group.

The cost of a superyacht can range from $10 million second-hand to $600 million new, industry figures show. 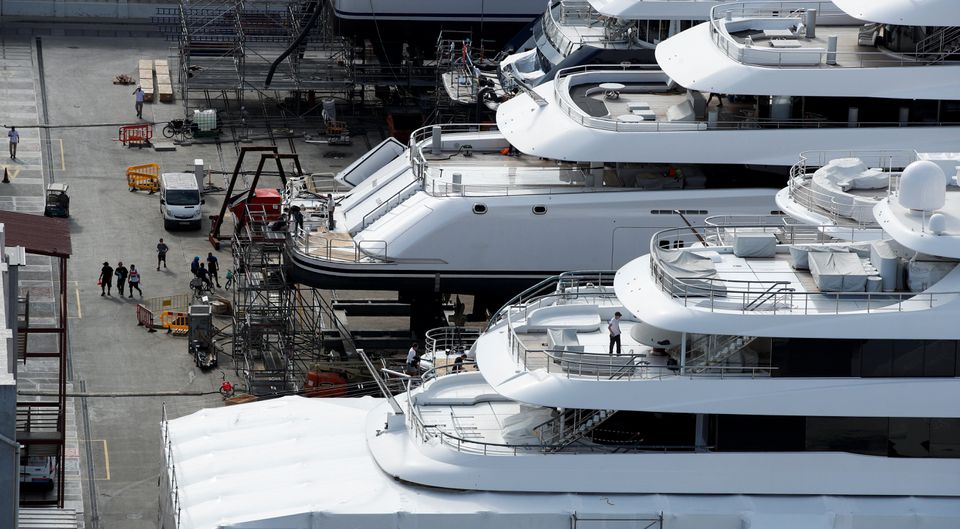 Over 200 new ones hit the water for the first time this year until September, up from 165 in the same period of 2019, the Superyacht Group said.

"Some have seen that their ultra-rich friends who own yachts had a nice time during the pandemic, while they had to lock themselves at home," said Pepe Garcia, chairman of Spanish shipyards MB92, the world's leading superyacht refit firm.

"I think this phenomenon is going to last for a few years."

MB92's Barcelona shipyard is full to capacity with boats measuring up to 180 metres. Around 1,000 workers paint, fix engines and perform other maintenance for owners seeking to have them ready for the year-end Caribbean season.

The company's commercial director Txema Rubio said as much as 10per cent of purchase value tends to be spent annually on maintenance and refits.

And with the number of billionaires soaring to 2,755 - 660 more than a year ago according to Forbes - there is clearly money washing around, even as campaigners decry the impact of private yachts, jets and space travel on the environment.

'All you need is now'

"There is a beautiful song by Duran Duran called 'All you need is now'," mused chief executive Alberto Galassi. "The pandemic has taught us how fragile our life is. Postponing is no longer an option for those who can afford it."

At Azimut Benetti, another Italian yacht builder, the order book tripled to 1.2 billion euros by August from a year earlier, with U.S. clients driving the demand.

The yacht sector is one of a few winners in the post-lockdown era. By contrast, just half of large cruise ships had returned to the seas by September under strict anti-Covid measures, the Cruise Lines International Association said.

Despite fears of contagion and extra Covid-related costs for travel, appetite remains high.

Spanish-based travel group Amadeus said cruise demand is on the rise for 2022.

Renting a super-yacht is also an option - if you can afford it.

A one-week luxury charter for up to 12 passengers in Greece or Italy can cost between 300,000 and 500,000 euros, two market sources said. On board facilities include spas, Michelin-level dining, watersports instruction and fitness classes.

In another popular destination, Croatia, around 433,000 people enjoyed a yacht charter holiday this year up to mid-October, 88 per cent more than in 2020, according to the national tourist board.

The boom has plenty of spin-offs.

Refitter MB92 is seeking to expand to the Middle East and the Americas, while its Barcelona neighbour, Marina Port Vell, will build 23 new berths for superyachts.

European investment fund Squircle Capital has stakes in both companies, attracted by the sector's high margins and evolution.

"We believe there is a very clear tendency of growth and transformation," said its founder and director Jose Caireta.