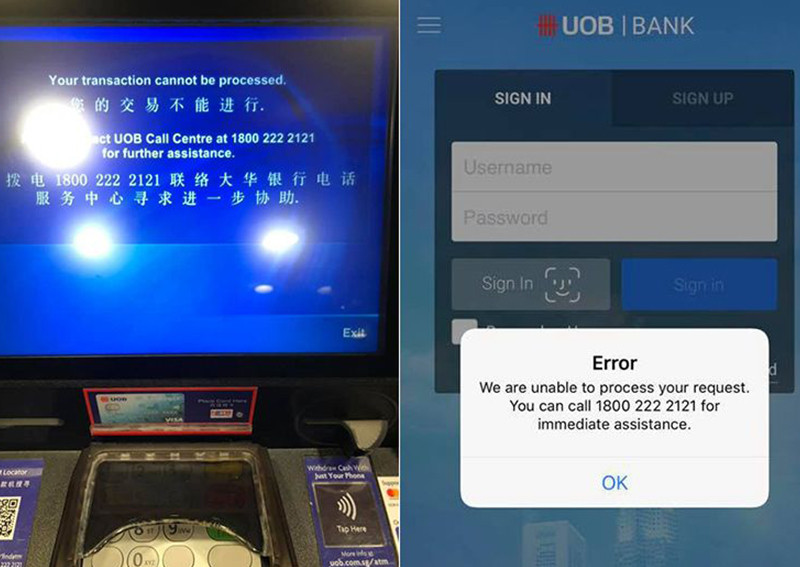 Some of them took to social media to air their grievances, posting to UOB's Facebook page to complain about the service disruption.

Complaints started surfacing on other social media platforms as well after 5pm.

In response to queries from The Straits Times, an UOB spokesman confirmed that ATM, card payment, internet banking and mobile application services were disrupted shortly after 5pm on Saturday.

All services were restored by 6.45pm, the spokesman said, apologising to customers affected by the disruption.

Facebook user Lim Kun Tee wrote in a post at 6.13pm: "Are the iBanking Services down? I can't even use my card for the payment gateway!"

Another user, Tien Goh, said that she was unable to access ATM and online banking services as well.

In a post at 6.40pm, Facebook user Vik Ramakrishna said that he was unable to access cash withdrawal and internet banking services. He was told that the service disruption was an islandwide issue when he contacted UOB's customer support, he wrote.

Some customers also wrote about their inability to make payments with the card.

Twitter user @yoonsy said that she was unable to use her card for Nets and contactless payments, and was unable to get through to the bank's customer service hotline.

In its response, UOB did not specify the cause of the service disruption.

"We thank you for your patience and once again, are sorry for the inconvenience caused," the spokesman said.

ATMBanks and Financial InstitutionsUOB
Share this article
This website is best viewed using the latest versions of web browsers.