Suzuki Cup: Singapore out after semi-final defeat by Indonesia Singapore's Faris Ramli (second from right) reacts after missing a penalty in the semi-final defeat by Indonesia.
The Straits Times

SINGAPORE - Down to just eight men, the Lions produced a defiant, backs-against-the-wall performance but ultimately it proved in vain as Indonesia emerged 4-2 winners after extra time in the second leg of the AFF Suzuki Cup semi-finals to win 5-3 on aggregate and advance to their sixth finals.

They will play either Thailand or Vietnam in their hunt for a first Asean Football Federation Championship.

The Indonesia and Vietnam coaches - Shin Tae-yong and Park Hang-seo - had previously suggested the level of officiating has not been befitting of an occasion as important as the semi-finals, and raised the possibility of using the Video Assistant Referee (VAR) for future editions.

Singapore coach Tatsuma Yoshida would surely agree after seeing a host of decisions go against his side in a crazy 15-minute spell at the end of first half, and then towards the end of 90 minutes in front of 9,982 fans at the National Stadium.

Indonesia led 1-0 thanks to Ezra Walian's 11th-minute opener, after the home defence could not cope with Ramai Rumakiek's lofted pass which allowed Witan Sulaeman to provide the assist.

In the 36th minute, Safuwan Baharudin was booked despite a clean tackle on Witan. Five minutes later, Amy Recha looked to have been impeded by Rachmat Irianto but the referee, Omani Qasim Matar Ali Al Hatmi, remained unmoved as he threatened to be the Grinch that stole the Lions' Christmas.

It got worse for the Lions after Safuwan received a second yellow card after clashing with Rizky Ridho before a free-kick was taken in first-half added time.

Justice was seemingly served as Shahdan Sulaiman's delivery was not cleared and Song Ui-young pounced to equalise with his first international goal on his sixth appearance.

It all threatened to boil over at half-time when the match officials were booed off the pitch and both coaches Shin and Yoshida faced off at the touchlines, and the drama continued in the second half.

Rizky blasted against the bar on the hour mark and Yoshida showed his hand by bringing on Ikhsan Fandi, Faris Ramli and Shawal, switching from a 5-4-1 to a 4-4-1.

Seven minutes later, Singapore were down to nine men after Irfan Fandi received his marching orders for bundling over Irfan Jaya as the last man.

Incredibly, the visitors committed 18 fouls up to the 83rd minute without getting a single yellow card.

One of them happened in the 74th minute, and up stepped Shahdan again to arc a beauty beyond Nadeo. 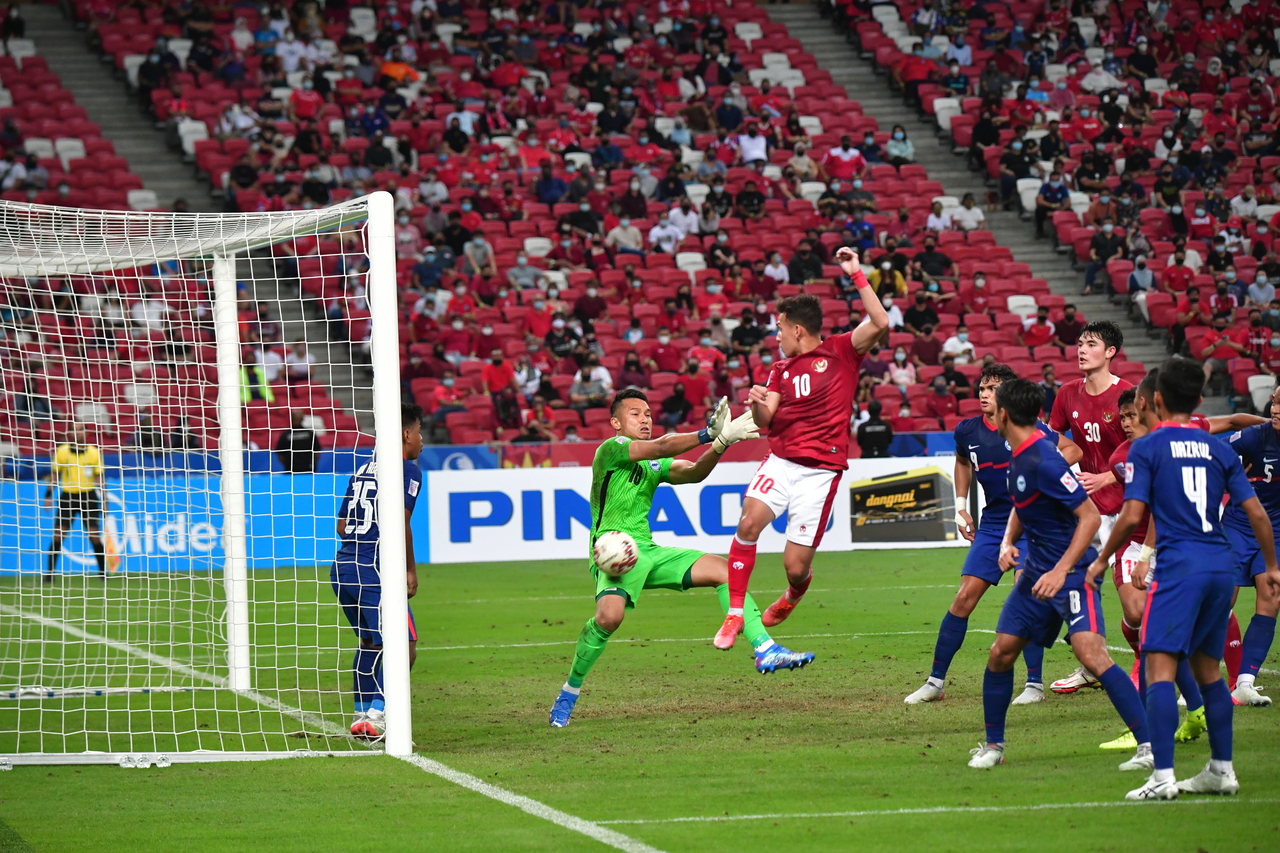 Despite their numerical disadvantage, Singapore continued to defend for their lives. Hassan Sunny produced numerous top-drawer saves to keep his side in the match, and he did so again against Witan in the 87th minute but was helpless to prevent Pratama Arhan from making it 2-2. Replays showed that the defender was marginally offside.

The drama, which Shin described as "heaven and hell", was unremitting. Two minutes later, Pratama brought down Shawal in the box, but Nadeo dived correctly to his left to parry Faris' penalty as an altercation happened between Singapore fans and the Indonesia bench in the stands.

It was not the Lions' night as Shawal miscued his clearance in the first minute of extra time, allowing Irfan Jaya to bundle the ball in.

This time, a Christmas miracle was not forthcoming, as Egy Maulana netted a fourth in the 105th minute to seal the win and Hassan was sent off in the 119th minute for a foul on Irfan Jaya as Ikhsan was required to play in goal.

Yoshida said: "Safuwan's first yellow card was not a foul, while Irfan and Hassan's red cards were a result of them trying. It was difficult to accept (the refereeing decisions), but I try.

"I told the boys before the match not to miss the opportunity to be finalists and their response was their performance, which is the best since I came to Singapore.

"I was moved by their Singapore spirit, their fighting spirit. They didn't give up even when we lost one player, and then one more, and then another. This never-say-die mentality is most important if we want to improve and become stronger.

"The players must believe in themselves that they can catch up (with the best teams in Asia), otherwise we cannot do it."

There are obvious costs in the millions to establish the VAR in terms of camera set-up and training, but as world football gets used to the VAR, it is time for ASEAN to move with the times, perhaps with help from Fifa for future Suzuki Cups.

Admittedly, the Lions were fortunate to have escaped with a penalty call in the first leg, but there were so many contentious decisions in the second leg that added to the drama but may not have been the right calls and deprived a team of a place in the finals.

Moving on, Singapore can take heart from this rousing display against the odds as they set their sights on the third round of Asian Cup qualifiers that start in June.

If ever there were an honourable and galvanising defeat, this was it. But they will also have to keep up this spirit, and not just when the chips are down.