In Singapore, rare plants sell online for $60,000 as hobbyists indulge a passion born of the pandemic Some Singaporeans used their time spent socially distanced to adopt a pet, pick up a hobby or learn a new skill — while others, like 13-year-old Sin Hai, decided to launch a business venture, inspired by the eye-watering sums that some of the rarest, slowest-growing plant species can now fetch on Facebook and Carousell.

A booming online marketplace for rare and costly houseplants has emerged in Singapore since last year, when pandemic-associated restrictions kept many indoors.

Large examples of popular cultivars, such as certain subspecies of Monstera deliciosia — a large-leaved native of Central America's tropical forests that's also known as the Swiss cheese plant — can be found listed online for as much as $60,000.

Taking pride of place in Sin Hai's collection is a Monstera aurea mint, worth some $20,000. The entrepreneurial teen runs a five-star rated store on e-commerce market Carousell called "Botanic Heaven", which lists a range of plants in various sizes — the most expensive selling for thousands of dollars.

He got his start propagating favourites such as the Philodendron domesticum, or spadeleaf philodendron, and Siam Ruby Banana in his parents' orchid plot — plants he later sold for $998 and $1,488, respectively.

Shawn Chen, owner of Greenfingers nursery, said the market for plants in Singapore had been kicked into overdrive by the pandemic, with the city state's traditional nurseries reporting a surge in sales last year, by 10 per cent or more. 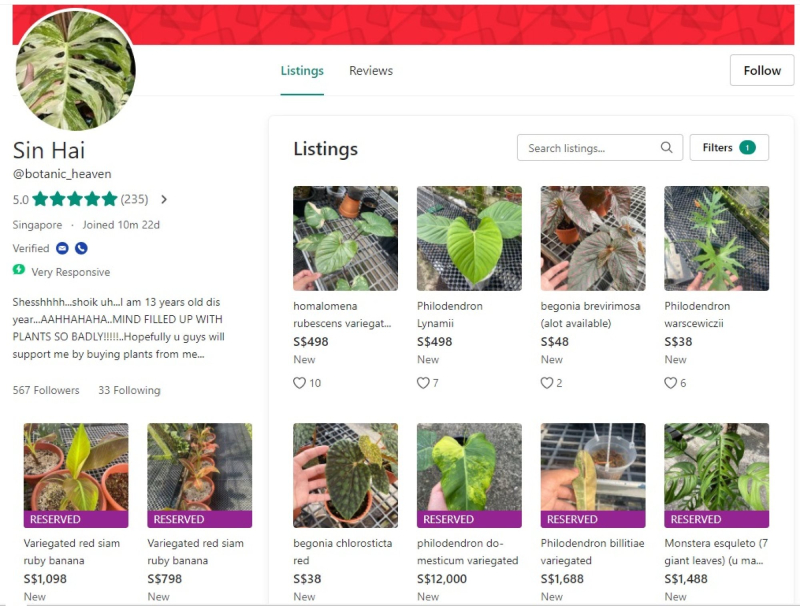 "I think it's the inherent nature of humans to want to care for and nurture something. Many people also got pets during the pandemic, but I think the level of commitment and barrier to entry for plants is a lot lower than for a cat or dog," Chen said.

Home-based sellers like Sin Hai flocked to e-commerce platforms to meet this increased demand for plants, and with prices reaching $54,380 on Carousell for a Monstera mint, it's easy to see why.

Plants that are already rare and in short supply are bound to attract high prices, but the pandemic served to send these shooting into the stratosphere as bored Singaporeans, stuck at home, found themselves with few options to spend their hard-earned cash.

"Covid-19 has made people save a lot of money," said Ching Teng Shang, a 35-year-old freelance graphic designer and owner of the Project Roots plant shop. "Plants have become a status symbol. [People] know that the plants will die, but they're still willing to pay a thousand dollars for them."

Variegated plants — those with different zones of colour on their leaves — are particularly popular in Singapore, with those from the Aracae family, also known as aroids, in highest demand, said Sandy Scapes, founder of Terrascapes nursery.

"You know anything that's trending, suddenly everyone wants a hand at it. Everyone wants to put their hand in the cookie jar," he said. "​​Last year, there was a plant boom. Many people turned to selling plants to make money."

The 46-year-old contrasted the business he and his partner Bridgette Yeoh run with those of online resellers who look to make a quick buck by chasing trends in a process known as "flipping".

"There are some [resellers] who made more money than us because they invested in very expensive and trending plants. [But] they don't really take the time to stabilise the plants [before selling]," he said.

In an ageing city state where fewer young people are opting to have children than in previous generations, many in Singapore are choosing instead to become "pawrents" or "parronts" — owners of pets or parrots — fulfilling a need to nurture that is now increasingly being met by the humble houseplant as well.

Since its launch in April last year, Facebook group Home Gardening Singapore has gained more than 82,900 members with the promise of a "friendly space" for information-sharing, discussion and plant sales, where "no achievement is too small for a celebration and there is no such thing as a silly question".

A passion for plants comes more from the joy that they bring than the price that is paid for them, according to Patricia Law, founder of social media company Goodstruph, who "went down the rabbit hole" of the hobby after a cousin gifted her a few plant pots in April last year.

She now has more than 74 plants at home — most of which she bought last year during Singapore's "circuit breaker" partial lockdown, and all of which she enjoys to keep thriving.

"The lessons learned from bringing a plant back to life are worth more than thousands of dollars" said Patricia Law, Singaporean plant enthusiast.

"I have had plants that wither away which I have brought back to life by tinkering and figuring out what I have done wrong," she said. "I think the fear of failure is a very deep-rooted Asian concept. It's OK to fail! The lessons learned from bringing a plant back to life are worth more than thousands of dollars."

For Nurul Atirah, the high prices paid for some exceptionally exceptional plant specimens are worth it — especially if it's "a rare plant and the variegation on the leaves are beautiful".

"In a way, [it's] a reward to pamper myself," said the 35-year-old civil servant, adding that she "appreciates the beauty of plants even though [others] might find it ordinary".

As Singapore has transitioned to living with Covid-19 as endemic, restrictions have eased and travel has opened up — sending plant sales spiralling downwards, with Terrascapes seeing about a 50 per cent drop in sales since November.

Project Roots' Teng concurred that Singapore's "plant craze is not as crazy" as it was when the first waves of coronavirus hit last year — but hobbies can be enduring, and many of those who found their passion for plants amid the pandemic expect to keep up their new-found green-fingered habits for some time yet.

"[I intend to] keep up this hobby forever," Atirah said. "It has helped to teach my children [about] responsibilities. They have their own plants and they tend to them, too."