SINGAPORE - The scramble to secure bus tickets via the land vaccinated travel lane (VTL) between Singapore and Malaysia hit a snag on Wednesday (Jan 12), after some customers had their bookings cancelled.

This comes after Singapore bus operator Transtar Travel released tickets under the quarantine-free travel scheme on Wednesday for trips from Feb 10 to Feb 28 on its website and Shopee virtual store.

Since Dec 23 last year, it had been selling daily VTL tickets across the Causeway one day at a time. On Wednesday, however, it abruptly released tickets for a period of 19 days.

A Land Transport Authority spokesman told The Straits Times that the move to open up trips between Feb 10 and Feb 28 will enable people to better plan their travel and leave arrangements.

But some eager customers were plagued by cancellations soon after tickets were released.

In a Facebook post on Wednesday night, Transtar Travel said it had been alerted through customer service and social media that some orders were cancelled, despite customers checking out and entering their travel particulars within a 30-minute grace period.

It traced the issue with Shopee to an online form used to collect the particulars.

Transtar Travel said the large volume of submissions on Wednesday caused the form to freeze. That resulted in customers being unable to submit particulars, and orders with no particulars being automatically cancelled after 30 minutes.

While the form "gradually recovered from the surge of submissions", some customers still had their bookings cancelled, it added.

It has temporarily frozen ticket sales on its Shopee store until a "reliable fix" can be found. The bus operator apologised, saying there was "no overselling" and affected customers will get a refund.

While Transtar Travel's Facebook post has since been removed, a notice on its Shopee store remains as at 2.40pm on Thursday. ST has contacted the bus operator and Shopee for comment.

Causeway Link and Transtar Travel are the only bus operators plying the route under the Malaysia-Singapore land VTL. 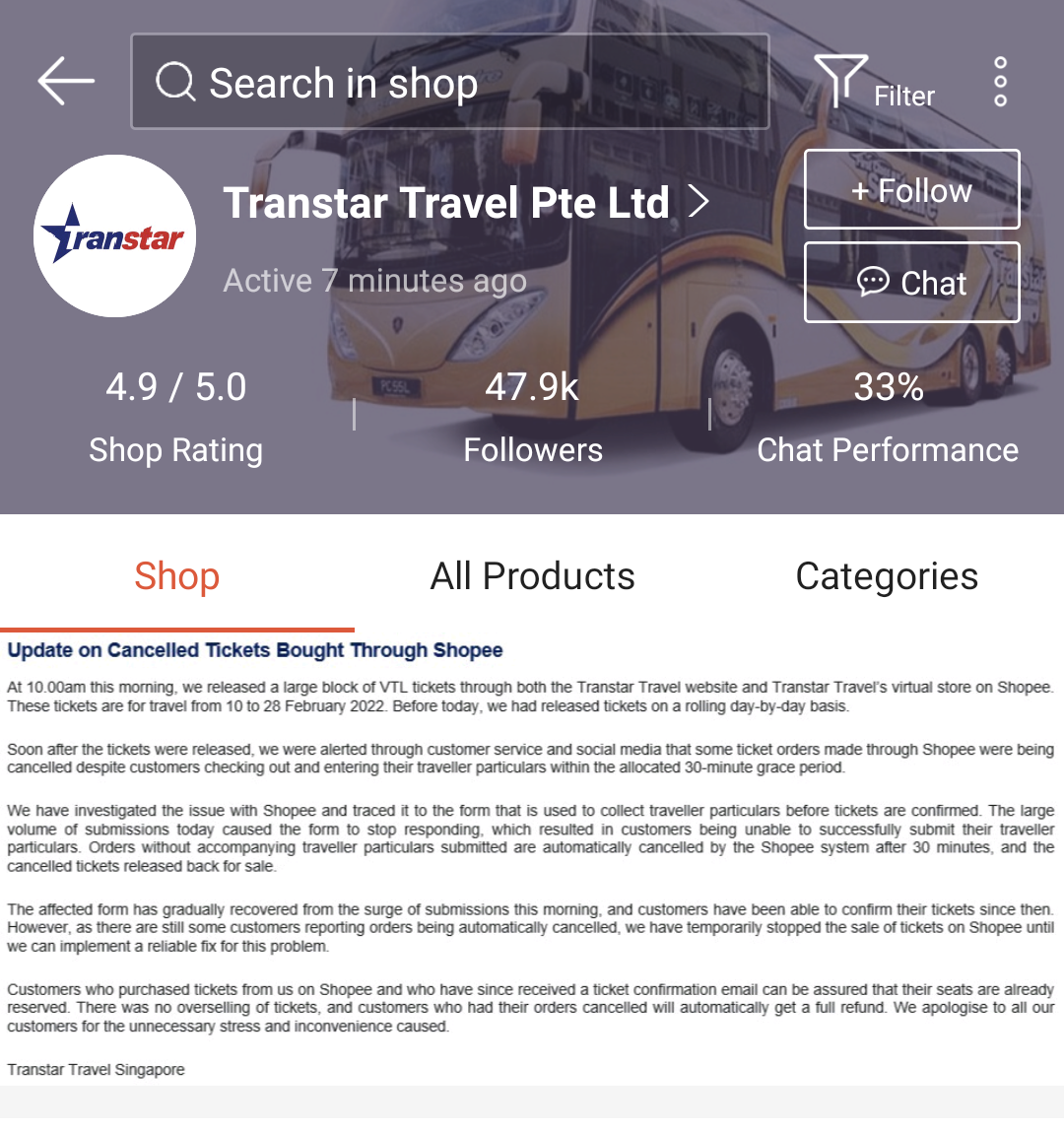 Demand for tickets remains brisk as many rush to make trips via the land VTL over the Chinese New Year period, with about 7,500 for the second week of February selling out within about 30 minutes when Malaysia operator Causeway Link released them on Thursday (Jan 13).

Administrator Ong Yiyin, 29, teared up as she told ST that her plans for her and her husband to reunite with their one-year-old son in Jementah in Johor might be dashed because the tickets they bought on Shopee from Johor Baru to Singapore on Feb 27 had been cancelled.

The couple have been trying to nab return tickets since last Wednesday, in a bid to visit their son and parents.

She said: "In December last year, I managed to get tickets for both of us to return to Malaysia after using three devices but since then, I haven't been able to get tickets to come back to Singapore.

"On Wednesday, I was so happy when they said my booking from Johor Baru to Singapore on Shopee was successful at around 11am but later I got a notification to say our booking was cancelled."

Ms Ong has called customer service several times but has not received a reply.

She added: "Please give us tickets rather than a refund. My husband hasn't even seen our son because I returned to Malaysia to give birth to him alone in 2020 and my son has since been looked after by his grandmother there."

Another affected customer, Ms Leu Seat Chin, 40, showed ST a screen shot of her order on Shopee indicating that she paid for a ticket at 10.30am, before it was cancelled about 30 minutes later.

The Malaysian account executive, who is aiming to reunite with her parents in Johor Baru, said: "If I queued and couldn't buy a ticket, it would be easier to accept. But this time I already paid for the ticket and it was still cancelled."

Meanwhile, some Causeway Link customers who bought tickets for the second week of February said on Thursday that they continue to face a technical glitch that cropped up earlier.

On Monday, more than 20 people complained that travel details had been changed. They bought tickets for travel from Johor Baru to Singapore, but the online booking system later reflected tickets from here to Johor Baru.

Malaysian account executive Kee Le Shan, 23, told ST that she managed to book a ticket from Johor Baru to Singapore at around 9am but received an e-mail from the booking service indicating that she had a ticket for the opposite direction.

She said: "I must have filled in my particulars between seven and 10 times, but it was still unsuccessful... If this problem cannot be fixed, I hope that I can quickly cancel the ticket and release it to other people."

Singapore on Dec 22 last year suspended the sale of new VTL tickets for travel into the Republic or Malaysia until Jan 20, in view of rising cases of infection globally due to the Omicron variant of Covid-19.

The authorities temporarily halved quotas for the number of travellers allowed to cross the Causeway under the land VTL from Jan 21.

On Dec 31, Malaysian newspaper The Star reported that the fate of the VTL for air and land between Malaysia and Singapore will be decided at least 48 hours before Jan 20 when the temporary suspension of the scheme is expected to end.