Samsung intended to pull at the public's heartstrings with a recent ad, but it ended up pulling the video instead.

On Wednesday (Jan 19), the tech giant removed a video that featured a Muslim woman supporting her drag queen son after receiving backlash from some people in Singapore.

In the ad, several people were seen using the brand's earbuds to listen to messages from a loved one while a smartwatch tracked their heart rate. These included an absentee father turning over a new leaf for his daughter, a man standing by his partner's side as she battled depression, as well as a pair of best friends.

However, much of the attention was directed towards a tudung-wearing woman who showed support for her drag queen son.

In the clip, the mother can be seen trying to hold back tears as she heard her son's voice.

"Dear mother, not many would have such an understanding and open-minded mum like you and my heart can't thank you enough.

"You are just unbothered having people looking or judging you differently for having a son that does drag," he said.

He later surprised her by entering the room in full drag and they embraced.

Some viewers did not take kindly to the ad and went online to voice their displeasure.

In a Facebook post, a netizen claimed that the video conveyed a clear message: that the "sanctity of Islam is affected by the concept of 'openness' which does not take into consideration whether something is permissible or not".

Another netizen said he felt like the ad was an "unfortunate attempt to push the LGBT ideology into a largely conservative Muslim community".

However, those on TikTok appeared to be more supportive as many users found the content heartwarming. 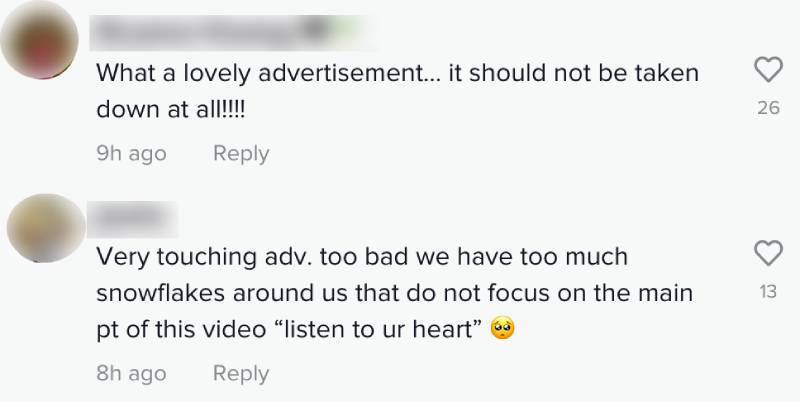 In response to public feedback, the company removed the video from its social media platforms.

The brand said in a Facebook post on Wednesday that they've fallen short as the campaign may have been perceived as "insensitive and offensive to some members of our local community".

"Samsung believes that innovation and growth are driven by diversity and inclusivity. We will certainly be more mindful and thorough in considering all perspectives and viewpoints for our future marketing campaigns," it added.