'No one is coming forward to reassure': Thousands paid, but no update on mattress purchases, say Robinsons customers They dropped some serious cash on luxury mattresses. But for some Robinsons customers, their quest for a good night's sleep has turned into a nightmare.

Despite putting down deposits or even making payment in full, some customers say they have no idea when — or if — they would be getting their mattresses.

Meanwhile, Robinsons' appointed liquidator KordaMentha will be meeting with mattress suppliers to resolve the situation and is "unable to provide any further update or action any deliveries, refunds or exchanges" until then, it told AsiaOne yesterday (Nov 1).

Robinsons had confirmed last Friday that it would be closing its stores at The Heeren and Raffles City Shopping Centre, along with its two stores in Malaysia.

Shortly after news of the closure broke, anxious customers who have yet to receive their mattresses took to Facebook to air their grievances.

Mattresses bought last year have yet to be delivered: Customers

One such customer, who wanted to be known only as Shao, told AsiaOne that he had paid $4,113 for a Sealy mattress as part of Robinsons' Black Friday sale on Nov 29 last year.

However, he and his wife remain uncertain if the mattress, which had been scheduled for delivery in December this year, will materialise. He added, "I would definitely love it if they can still deliver the mattress. But if this is not possible, we certainly want a refund."

But the couple have gotten "no updates" from Robinsons or its liquidators so far.

"Consumers like us would never know or understand what the payment arrangement between Robinsons and Sealy is, as we just pay to get the bed that we want. We are feeling despaired as no one is coming forward to reassure [us]," the 31-year-old said.

Another commenter, who said she had also bought a queen-size Sealy orthopaedic mattress last November, appealed to the company to provide an update soon, writing: "The sole purpose of purchasing a Sealy was because of the quality of your mattress.

"The mattress was supposed to greatly help us have better sleep during my confinement as well. We went out of our budget to purchase this mattress for health reasons, so we don't really have much cash on hand to purchase another one."

The mattress was originally scheduled to be delivered on Nov 7, the woman — who is expecting and moving into a new home soon — added.

Yet another customer who had purchased a Simmons mattress from Robinsons said: "In my opinion, this is between Simmons and Robinsons and it [has] nothing to do with us consumers. We trusted and [made] full payment for the products. We did not delay the payment for the mattress."

Mattress suppliers to meet with liquidators

Meanwhile, mattress suppliers have found themselves stuck between a rock and a hard place.

Addressing customers' queries in a statement on Facebook on Saturday (Oct 31), Simmons shared that it would be meeting KordaMentha "in the coming week" to resolve issues relating to deposits and pre-payments.

"Until we resolve the issue with Robinsons, we do not have any updates pertaining to deliveries, exchanges and refunds. We seek your patience and understanding," the company said.

Sealy Singapore also announced the same day that customers who had paid Robinsons and have yet to receive a refund should contact their bank to cancel the payment immediately.

"You can then redirect your purchase and payment to us and we will deliver your products in full," the company advised.

However, several customers reported that they faced issues getting their bank to cancel the payment. 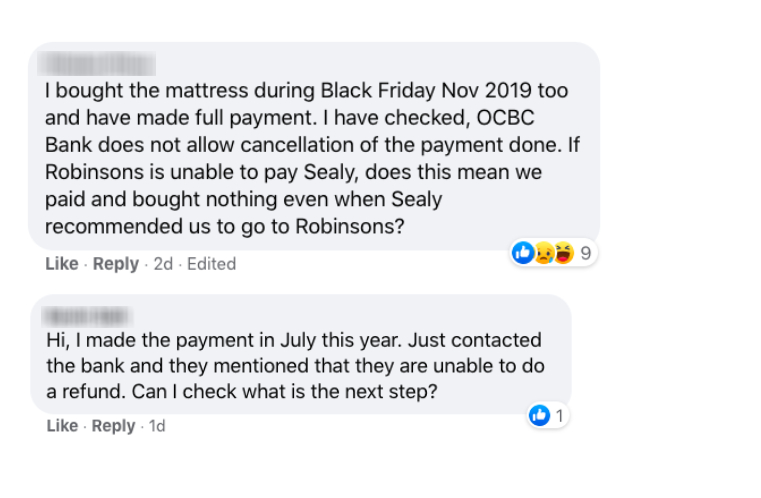 In response to AsiaOne's queries, Hamish Bull, the director of KordaMentha, said that mattress sales have been identified as a "priority issue".

KordaMentha is scheduling meetings with mattress suppliers "on an urgent basis" to tackle the issue, he assured.

Customers weren't the only ones caught off-guard by news of Robinsons' shuttering.

Some vendors said they are owed "substantial amounts" in unpaid sales. They did not see the closure coming as they had been discussing up until mid-October upcoming promotions and sales for Black Friday, Christmas, and Chinese New Year with Robinsons staff, they added.