This made my day: TikToker whips up hot meals for migrant workers working in the rain While most of us have the luxury of staying home when it rains, the migrant workers toiling in the open aren't quite as lucky.

Unable to bear with the sight of a group of migrant workers working in the rain outside her flat, local business owner Sharan Dhaliwal decided to cook up a piping hot meal for them to enjoy.

She filmed her cooking process in a TikTok video uploaded last Sunday (June 6), showing off a large pot of dalcha — a lentil-based curry — bubbling away on the hob while she fried up several eggs and hot dogs.

After she packed the food into large individual portions, Dhaliwal surprised the migrant workers with the freshly cooked meals.

She gushed: "They were so happy!"

Some love for our migrant brothers ❤️

Her act of kindness touched the hearts of those on TikTok as her video quickly racked up over 600,000 views in two days. Many people praised her for going the extra mile just to prepare a warm meal for strangers. 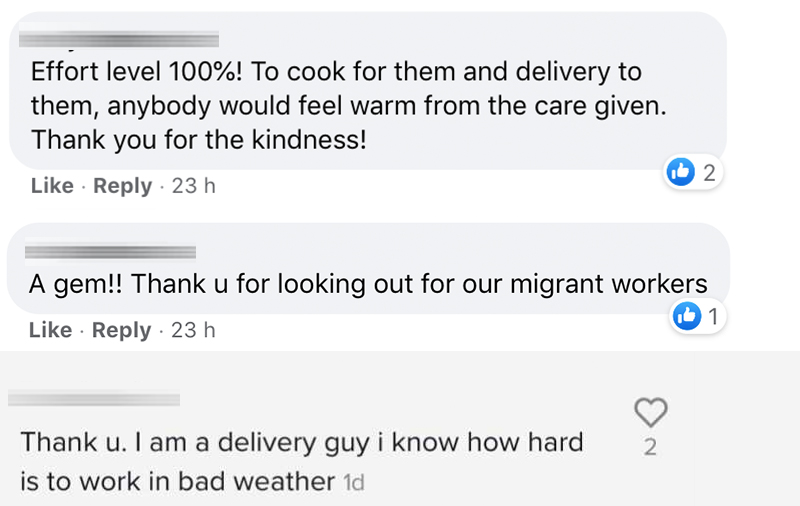 Besides Dhaliwal, other people in Singapore have also made it a point to extend a helping hand to the migrant workers they see struggling in the midst of the pandemic.

On Labour Day, a young couple saw a migrant worker slogging away under the hot sun near their home. They prepared and handed him a small bag full of snacks and drinks.

What touched the pair, however, was the worker's selflessness. He immediately shared the bag of goodies with his colleagues who were not within the couple's sight when they looked out of their window.

Realising this, the duo filled another bag with more refreshments such as several cans of soft drinks, bottles of water and packets of biscuits, and brought it down to distribute among the migrant workers.

♬ When I Look At You (Instrumental) - BLVKSHP

According to Itsrainingraincoats, a local initiative that helps migrant workers in need, many dentists have also stepped forward to provide free dental treatments. One clinic even donated over 200,000 face masks to them.

The group thanked the many people who have shown migrant workers kindness during this difficult time.

"To them, it's the gesture that means the world, to know that random strangers care."