Their heartwarming neighbourly relationship continues, this time into winter solstice, a Chinese festival that Chef Bob — a local celebrity chef and TV personality whose real name is Shahrizal Salleh — has just learnt about from Nenek Cina.

On Monday (Jan 3), he uploaded a TikTok video which showed Nenek Cina offering prayers outside her home.

Curious as to what the occasion was, he asked her, who explained in Malay that it was winter solstice.

He added in the video that Atok Cina (Chinese grandfather) also told him that it was the first day of winter.

The winter solstice festival, or dongzhi, usually falls between Dec 21 to 23, and is a time where Chinese families gather together and offer prayers to their ancestors.

In the spirit of dongzhi, Nenek Cina also offered Chef Bob a serving of 'tang yuan', along with a packet of sugar and crushed peanuts. She told him to coat the rice ball with the sugar and peanut before eating it.

The sweet treat earned a seal of approval from the Chef, who can be heard remarking "Shiok!" after tasting the tang yuan.

Wanting to return Nenek Cina's favour, Chef Bob ended off the video by asking his followers to provide some suggestions about what he should get Nenek Cina and her family for the upcoming Chinese New Year.

The heartwarming exchange between the two neighbours has since racked up more than 250,000 views and almost 900 comments from netizens who clearly loved the neighbours' friendly relationship. 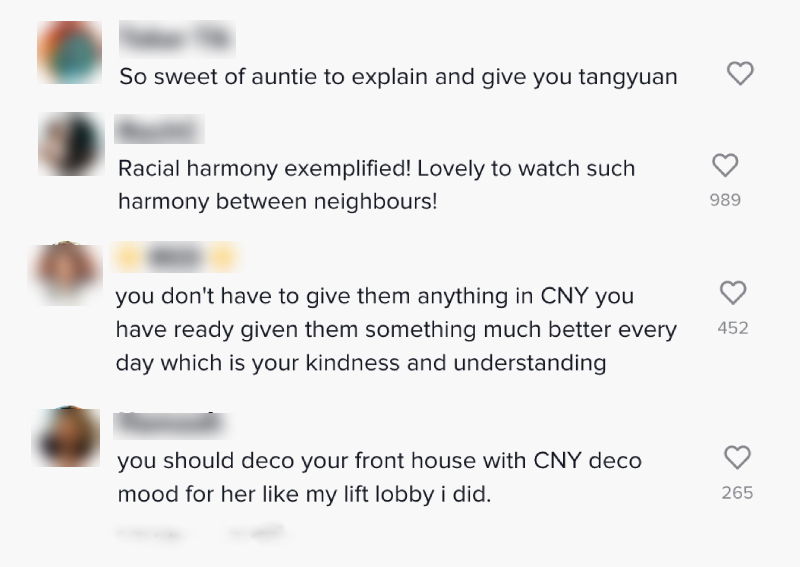 ALSO READ: This made my day: VivoCity Kopitiam manager treats pregnant woman who had no cash to lunch

This made my dayTikTokviral videosFestivals/CelebrationsSocial media
Share this article
This website is best viewed using the latest versions of web browsers.