Inspired to inspire: They simply wowed us in 2021 "Nothing is impossible. The word itself says 'I'm possible'!" Audrey Hepburn, the actress who epitomised Hollywood chic in the 1950s and 60s, is alleged to have said.

And no one encapsulates that sentiment than the Singa-peeps in our list of inspiring individuals who made headlines here on Wonderwall.sg.

Amid the setbacks and restrictions brought on by Covid-19, and despite how topsy-turvy 2021 has been, these individuals have shone through (whether with their achievements, hearts of gold or pure talent), and become fine examples of how you can inspire others by being the best version of yourself.

Read on and be compelled to level up. #SGBoleh!

In June, singer, actor, producer, and Kollywood star Shabir and his team at Shabir Music Asia brainstormed a genius idea to help both our hawkers as well as migrant workers: They kick-started a fundraising campaign called WeEat to sponsor and order food in bulk from local hawkers, and have it delivered it to the workers' dormitories to let them have a taste of local delicacies.

This initiative prompted even a group of migrant workers themselves to come forward to donate to help support our hawkers.

More recently, Shabir didn't think twice when we asked him to consider being part of Movember — a project that encourages men to grow moustaches to raise awareness about men's health issues. Not only did our hirsute brother sprout a 'Mo' overnight, he also invited fellow celebs to take on the challenge.

Everyone involved in The Road Ahead

This year's NDP2021 theme song, The Road Ahead, combines the vocals and musical stylings of four local artists: Sezairi, Shye, Shabir, and Linying, who co-composed the song with producer Evan Low.

Directed by Jerrold Chong and Huang Junxiang, the music video made history by being the first NDP music video to blend live-action and animation — and what gorgeous and amazing animation at that!

And you know how you can tell when the team is really sibei tokong? The song took top spot in a list of Top Music Videos that Singaporeans were watching in 2021 — ahead of BTS and Lisa!

Those chain Whatsapp messages your family members always send? Annoying — minus alerts of this super useful one-stop portal aka safedistancing.sg by Jason Leow that compiles all the most updated government directives for Covid-19 restrictions.

This isn’t Jason's first Covid-19-related rodeo either. During the Circuit Breaker, he created other websites such as Dabao Dash, VisualAid, Care Costs Calculator, Majulah Belanja, and Grant Hunt to help fellow Singaporeans in need. And he did it all for free, ok!

This 16-year-old impressed us all with his amazing original rendition of the theme song for NDP2021. We found out that the bonafide performer had a string of gigs at the Esplanade under his belt, and had even travelled overseas to Korea and Guam, US to perform there.

The School of the Arts student picked up the ukulele at the age of 8, and by the time he was 11, he was taking on mind-blowingly challenging pieces like Third Stream by Jake Shimabukuro.

He even has an album, After All, of covers and originals on Spotify. You got not?

The five-time Paralympic gold medallist (who scored two Gold medals at Tokyo 2020) put the cherry on the top of the cake by setting a time of 1:02.04 — a new Season Best record and successfully defending her Gold medal from Rio 2016, cementing her spot as the reigning World Record holder for both events in which she came in first place. 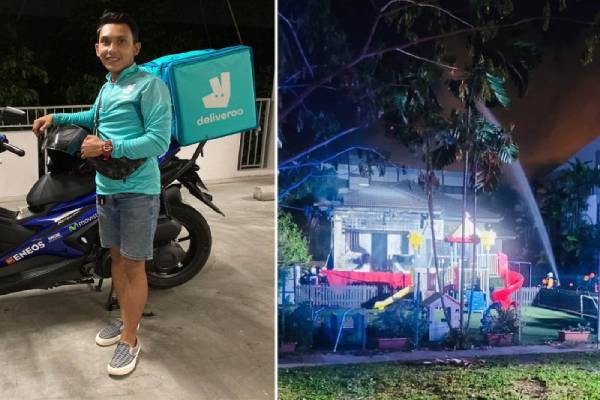 For newlywed Haziq Taha, his stint as a firefighter during national service came in handy when a fire that broke out at Maple Bear Preschool earlier this August — he used his invaluable skills to help bystanders and prep the area for incoming firefighters.

The best part: the 24-year-old Deliveroo rider managed to deliver his order after stopping to help out. And he was only 20 minutes late!

For his Good Samaritan spirit, he was awared the SCDF Community First Responder Award. In addition, Deliveroo rewarded Haziq with $200 worth of credits, and presented him and his wife with two tickets to the Singapore Zoo.

This year's Bocuse d'Or (aka the Olympics of the of the gourmet world) was held in Lyon, France, and Team Singapore sent our youngest-ever candidate, chef Mathew Leong to represent our Little Red Dot in the culinary competition. And he didn't disappoint.

The yandao 26-year-old — who is also head chef at Michelin Plate Restaurant À L'aise in Oslo, Norway — finished in the top 12 out of 21 countries.

And he's not resting on his laurels — Mathew has already started training for the next Bocuse d'Or, and is aiming for top 10.

Daughters Of Tomorrow, a charity that trains, empowers, and helps find sustained employment for underprivileged women, recently celebrated its 7th anniversary by showcasing stories of resilient women in a campaign called Twenty One Daughters.

Among them was 27-year-old Zulayqha Zulkifli, whose passion for helping others started since she was young, doing grassroots work at the age of nine.

During the Circuit Breaker, Zulayqha and her siblings started Project Hills, an initiative that provides assistance to residents of rental flats by raising funds and procuring items for them.

Another resilient individual spotlighted in celebration of Daughters of Tomorrow's 7th anniversary was this 28-year-old mother of two, who really embodies the never-give-up spirit.

Aisyah (Jenny) Choo not only has a home-based lactation cookie business under her belt, but she also co-founded her own cleaning business, VKleen, whose mission it is to create a safe environment for cleaners.

Jenny is the quintessence of a determined entrepreneurial spirit, despite growing up in a broken home and suffering physical abuse.

Age is just a number to some people, in particular, this 52-year-old fitspo, who started learning how to do a handstand at the age of 50, and has been doing them all around Singapore since.

We shone the spotlight on Freeman Loke to commemorate International Men's Day on Nov 19 — we were simply blown away by how he's just been getting fitter (unlike many of us couch potatoes) as he gets older.

Other than keeping in tip-top shape, Loke also has a heart of gold, regularly shaving his head for Hair For Hope (the Children's Cancer Foundation's signature head-shaving fundraiser) as well as donating blood. Kudos to you bro!

A sustainable urban farming career, a book, an inspiring stint as a naval diver during national service, and an aerospace engineering degree: Christopher Leow is only 34 years old but has all of this in the bag — and more, we suspect!

The Head Farmer at Edible Garden City (he's in charge of a rooftop farm that will support a new farm-to-table concept) continues to be hard at work fulfilling that green dream of building and educating the community, and helping businesses and individuals be more sustainable by regenerating the food system — all for the survival of the human race! 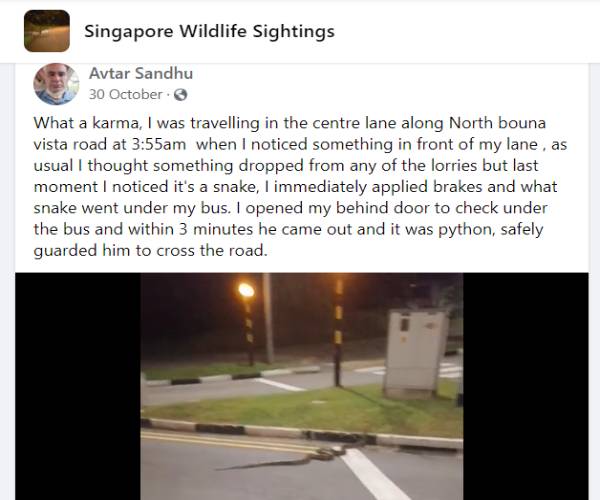 Why did the snake cross the road? Because it was protected by one kind-hearted soul.

SBS Transit bus captain, Avtar Sandhu, could consider a career switch to zookeeper. Just look at how gentle he was as he guided this huge python across the road, after letting it take shelter under his bus for a few minutes.

It's the little things, people.

READ ALSO: The year that was: 9 celeb mums who showed us strength and conviction in a tough year

This article was first published in Wonderwall.