Craig Foster (above), who played for Singapore in 1991, speaking to The New Paper via Zoom. He and a group of former athletes helped evacuate hundreds of Afghans including Paralympians Zakia Khudadadi and Hossain Rasouli, who competed at the just concluded Tokyo Games.
PHOTO: Reuters
PUBLISHED ONSeptember 06, 2021 12:55 AMBySamuel Devaraj

He had done all that he could and all that was left was to wait for a phone call.

As he sat in his home in Sydney, anxiety, anticipation and dread gripped him as he thought of events occurring thousands of kilometres away in Kabul, Afghanistan.

Craig Foster cannot remember exactly when his phone rang, but he knows it was sometime in the middle of the night when Australian Foreign Minister Marise Payne called and informed him that the Afghanistan women's football team had finally entered the grounds of the Hamid Karzai International Airport to board a flight out of the country.

The group of 80 Afghans, made up of players, family members and officials, had spent 30 hours outside the heavily fortified perimeter of the airport, exposed and vulnerable as they tried to get in, and on Aug 24, various news agencies reported that they had been successfully evacuated, aided by a band of former athletes, including Foster.

Recalling the moment he heard they were in the relative safety of the airport, human rights activist Foster, who played for Singapore in 1991 and was the former captain of the Australia national football team, told The New Paper: "That moment was one of both joy and deep relief.

"I think a number of those involved in the rescue mission were in tears because the team had been trying for almost a day and a half. They were turned back a couple of times by guards.

"And in the end, to hear that they were inside, it gave everyone hope, because there were so many other athletes yet to come and others, non-athletes, that we wanted to help, and that was a moment when we knew that it was all possible.

"We knew we had succeeded, in the first step. And that gave everyone powerful motivation to continue.

"My thanks go to Australia's Foreign and Immigration ministers, Payne and (Alex) Hawke particularly, for moving so quickly and thereby enabling all the ensuing efforts to get them out."

The former footballer credits Singapore for helping shape his beliefs and desire to fight for social justice and human rights.

Speaking via Zoom from Sydney on Friday, Foster, 52, said: "I went to Singapore when I was 21. It provided me with an opportunity to grow as a person, and also culturally, it was fascinating, beautiful.

"The opportunity to live in Singapore and then on to Hong Kong and later London, all through the power of football, has been a great gift in my life. 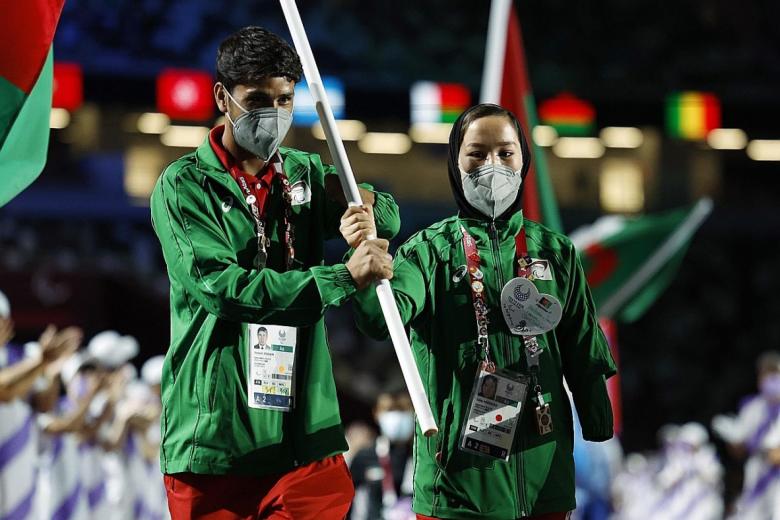 "Living in Singapore, playing with and befriending Chinese, Malay and Indian communities was the first step on a journey as a global citizen that informs my human rights advocacy today, this concept that we are all connected and have a responsibility to help each other whenever we are able to."

To date, Foster - he played 29 times for Australia - and a group made up of a number of former athletes, have managed to help evacuate more than a hundred Afghan female athletes, their family members and officials, along with hundreds more ordinary Afghans, as the Taliban took over the country.

They also helped Paralympians Zakia Khudadadi and Hossain Rasouli, who competed at the recently concluded Tokyo Games, get out.

Foster gained prominence when he worked tirelessly to secure the release of Bahraini footballer Hakeem al-Araibi.

Hakeem, a vocal advocate for human rights in his birth country Bahrain, was on Interpol's radar and was arrested and jailed in Thailand in 2018.

Foster led a global effort that included lobbying Fifa, the sport's governing body, for his release, and Hakeem was eventually freed and is now an Australian citizen.

Nikki Dryden, a former Canadian Olympic swimmer and Australian Alison Battisson, a human rights lawyer and former kickboxer, got in touch with him in the middle of August in collaboration with the Centre for Sport and Human Rights in Geneva and FIFPro, the global footballers body, as the situation in Kabul grew more tense amid the withdrawal of allied troops.

With women in Afghanistan not encouraged to play sport, the group felt that Afghan sportswomen, especially those with a high profile, would be at extreme risk under a new regime.

Foster said: "That is something that we all felt strongly about - women's rights, gender equality, and girls' right to play sports is non-negotiable as far as we are all concerned.

"So, I joined a call with the Centre for Sport and Human Rights and they were asking for governments around the world for assistance... they said there are many female athletes at immediate risk, and we need governments to provide protection and evacuation."

With the visas confirmed, the Afghan women's football team could set off for the airport in Kabul.

On Friday, the last of the more than 80 Afghans that made up the group that included the women's football team arrived in Australia via Dubai. They are serving their 14-day quarantine.

Foster, who has been in touch with several of the footballers, said: "They are recuperating after what has been an extraordinary ordeal, and for the next phase, we will be working with resettlement services for them to settle into Australian life.

"The Australian football community are already fund-raising for them, and there is an enormous outpouring of solidarity and care."

Foster praised the efforts of the international community in helping the Afghan people and hopes governments around the world will now work with the Taliban government and help the nation move forward, especially on women's rights.

Foster is grateful that his time in sport has given him the opportunity to advocate for vulnerable people.

"Sport provides us with social currency and leverage, gives us a platform, and with that comes great privilege and therefore responsibility. That is as applicable for Fandi Ahmad in Singapore, for example, as it is for Craig Foster in Australia.

"We can and must use our influence to help others who have not been afforded the opportunities that we have had and to help shape a better world, whether it is climate action and a sustainable planet, poverty or vaccine equity.

"I am delighted to see global sport increasingly find its voice and call on all of sport to do more.

"We look forward to welcoming the Afghan women's national football team to Australia, and they will forever be symbolic of what sport can achieve when we mobilise our vast, interconnected global community."