Head over heels? Man caught trying on woman's shoes outside her house without permission Leaving your shoes outside your home may seem like common practice, but one woman did not expect that a complete stranger would take such fancy to her footwear.

In the video, she also showed a photograph of three pairs of shoes that she left outside her house.

At 1.30am, the man appears outside the house, and catches sight of the shoes on the floor. After bending down to pick one of the shoes up for a closer look, he removes his shoe and slips his foot into the beige pump.

He then grabbed a pair of black heels before leaving.

The video has gained more than 600,000 views on TikTok, with many netizens sharing Miller's bewilderment at the man's actions, and others who came up with rather interesting reasons to explain the his intentions. 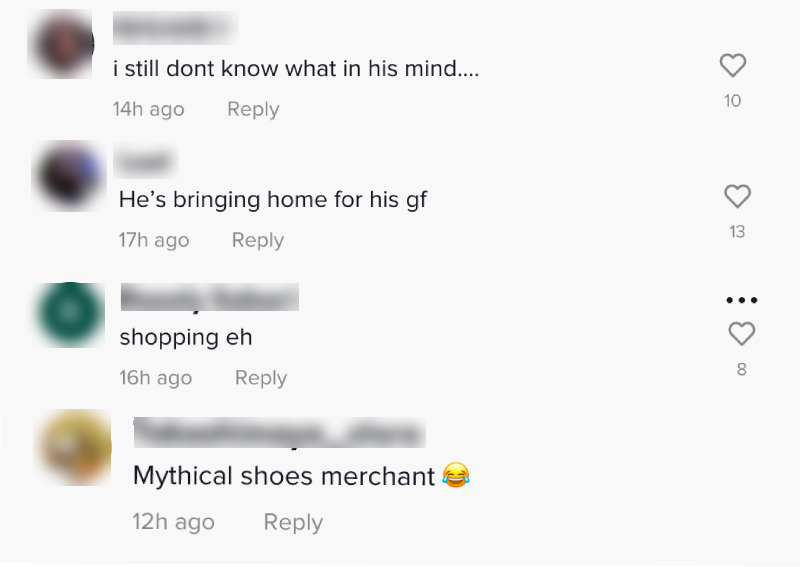 Miller also stated in the comments that her house does not have a gate as it is a rented shophouse. She added that she has also made multiple police reports against the man.

It turns out, this isn't the first time that this man has appeared at Miller's doorstep. According to her other TikTok videos, the man appeared at her house on Dec 13, where he left a pair of black pumps at her doorstep.

He visited the house again on Dec 16, and for a third time on Dec 21. On both occasions, he appeared to be searching for something. Unable to find what he was looking for, he left the property.

On Tuesday, Miller posted another video, providing an update to the situation.

AsiaOne has reached out to the police for more details.

ALSO READ: Woman in Sengkang finally finds out who has been stealing her flip-flops