Grandma's reaction to TikToker coming out leaves the internet in tears Blood is thicker than water they say — this video of a local TikToker coming out to his loving grandmother proves why.

On Sunday (Oct 3), user shaunshyen posted a one-minute video, with almost a million views, that documented his visit to his grandmother. He had come out to his parents earlier and decided it was time his grandmother knows.

"I'm a little nervous," reads the in-video caption as shaunshyen heads up to his grandmother's unit from the HDB void deck.

In the video, as he walked towards her doorstep, his grandmother breaks into a smile and a slight chuckle at the sight of her grandson.

As the video progresses, the grandmother remains focused on the television show while shaunshyen quietly waits for the right moment. When the show ends, he calls her over.

"I have something to tell you," he said, with an arm around her shoulder, "when I was young I have known this."

"I told dad and mom that I liked guys. Are you okay with it?"

Without pausing, the grandmother replied in Mandarin: "Okay, it doesn't matter."

She continues to repeat those exact words.

The comments section was filled with emotional TikTokers on the brink of, or some fully in, tears at what they've just witnessed.

There were also others who took a second to applaud shaunshyen's grandmother. Her loving acceptance and quickness in response had this particular TikToker googly-eyed.

Some decided to be a wet blanket, claiming that his grandmother was internally disapproving and heartbroken.

Replying to that comment, the following day, shaunshyen gave his grandmother another visit to check if she regretted knowing what he told her the day prior.

She told him: “I love all my grandchildren as they are all precious to me.” 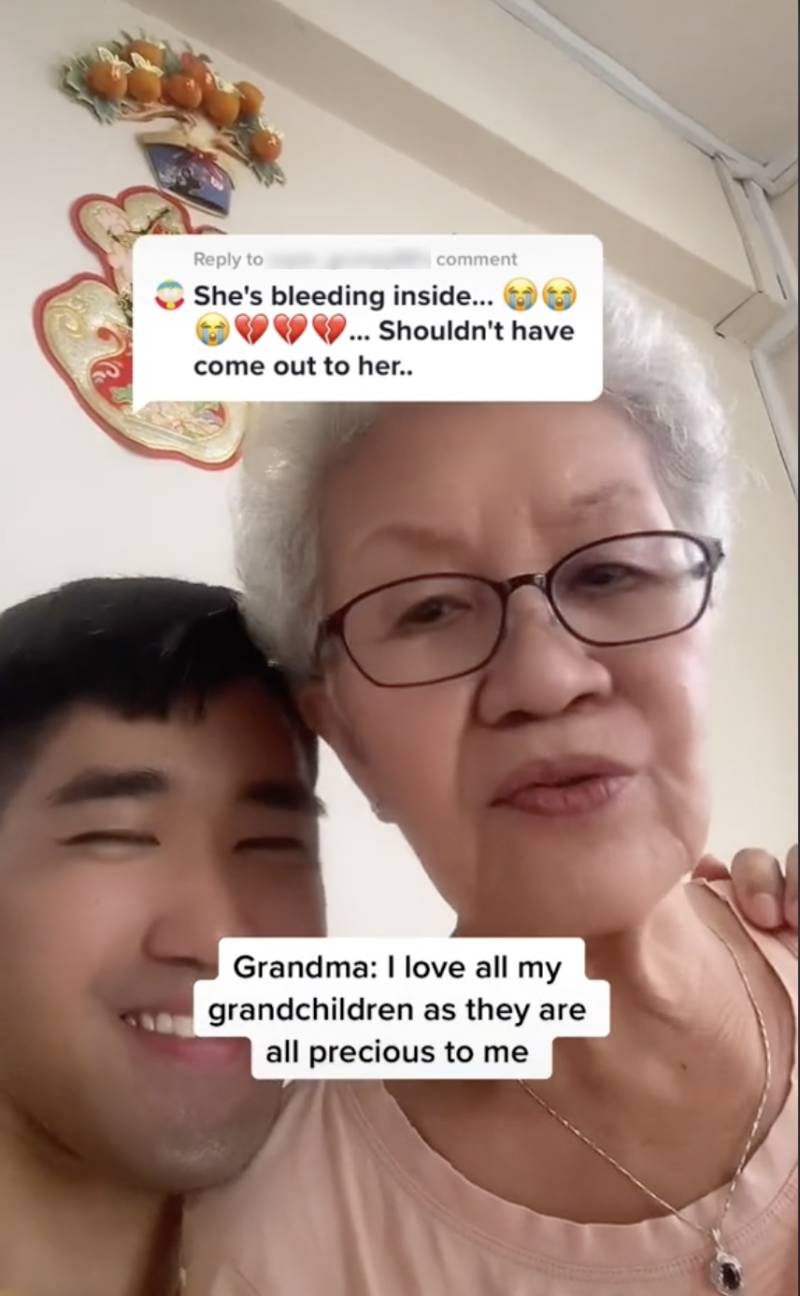 Issues surrounding inclusivity and acceptance of the LGBTQ community tend to be contentious.

In September 2020, W Singapore reposted an image of local fashion model Andee Chua and his boyfriend having a staycation which caused a stir and had people on both sides arguing their stance online.