With their Gojek ride nowhere in sight, a passenger called the driver to ask him where he was, only to be taunted with offensive remarks.

The passenger, Instagram user Decibels_ilu, posted a video recording of his exchange with the driver on Tuesday (Jan 11) after booking a ride starting at a block along Jurong West Ave 1.

A copy of the video screen was later shared on the Instagram page Wake Up, Singapore.

"We put Block 316 [in the app], but you're not at Block 316... don't know where you go, and you wanna talk this kind of gibberish," Decibels_ilu could be heard saying in the phone call.

But his words were drowned out by the driver uttering intelligible sounds that were meant to mock the Tamil language.

Besides sharing the video, the passenger also posted three Instagram stories detailing his encounter with the driver. 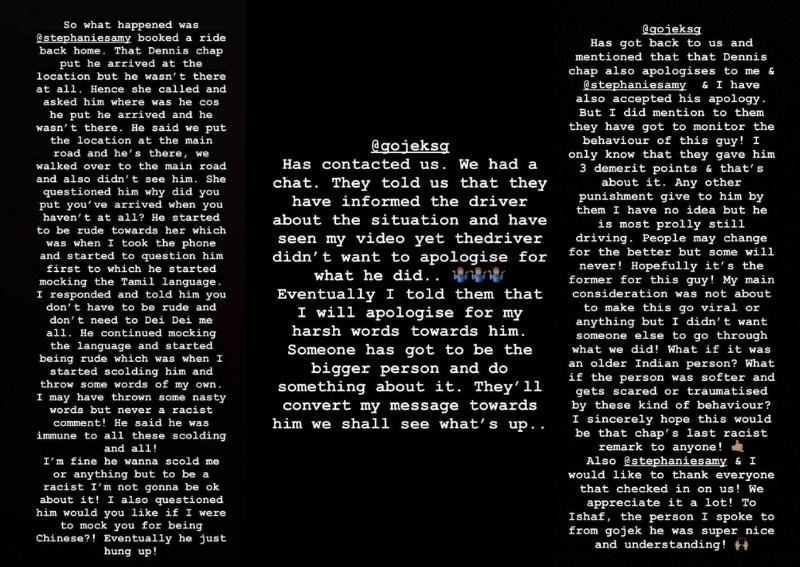 Decibels_ilu said that the driver apparently indicated his arrival at the pickup point when he was not there.

When the passenger's companion, who booked the ride, asked the driver why he did so, she received a rude reply.

Decibels_ilu then took the phone from her to further question the driver, but he ended up being on the receiving end of the offending remarks. The passenger admitted that he too, said some unpleasant things to the driver.

In a subsequent post, the man wrote that Gojek had reached out to him to resolve the matter. He also conveyed his apologies to the driver for his harsh words during the phone call.

"Someone has got to be the bigger person and do something about it," he wrote.

In the last Instagram story, Decibels_ilu shared that the driver apologised for his actions and that he received three demerit points.

However, many netizens felt that the punishment was not sufficient and called for the driver to be removed from the ride-hailing platform. 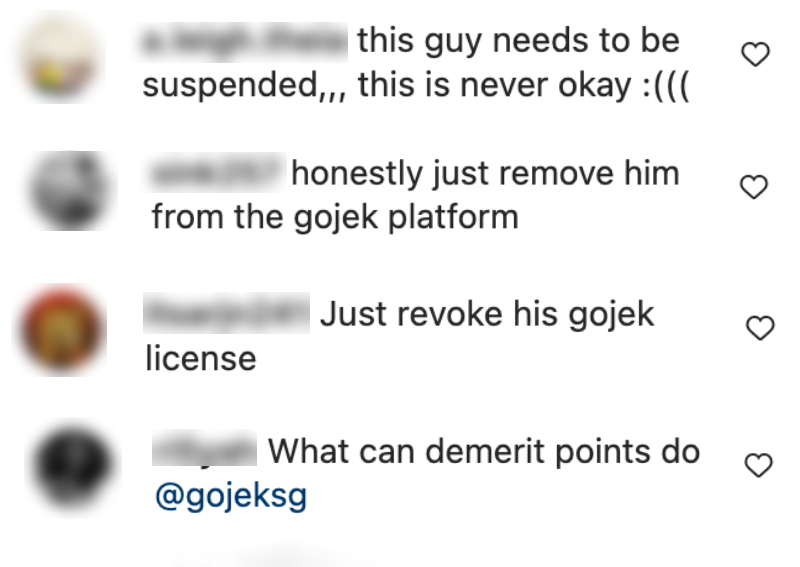 In response to AsiaOne's queries, Gojek said on Wednesday that it spoke with both parties and investigated the incident.

"The driver has been censured and has apologised sincerely, which the customer has accepted."

"We regret that this has caused hurt and are committed to ensuring safe rides for all. As such, we will continue to strengthen educational efforts to prevent such behaviour on our platform," the company added.

Just last month, Ryde suspended one of its drivers who allegedly told his passenger that it was wrong to pray inside his car, as doing so would change the "energy" inside the vehicle.

ALSO READ: 'I miss you, why didn't you call me?' Gojek driver, 50, suspended after flirting with 10-year-old passenger