Germane? Words heard during Committee of Privileges hearings that made you google The Bee Gees sang, "It's only words and words are all I have," and yet some words have left us stumped after watching several of the Committee of Privileges hearings this month.

With more than 24 hours of footage combined, some of us have been furiously googling that word we are hearing for the first time. Here are a few that have captured the public's imagination.

When the word germane surfaced in one of the hearings, some of us scratched our heads. Several Redditors said they learnt something new and made it the day's buzzword. 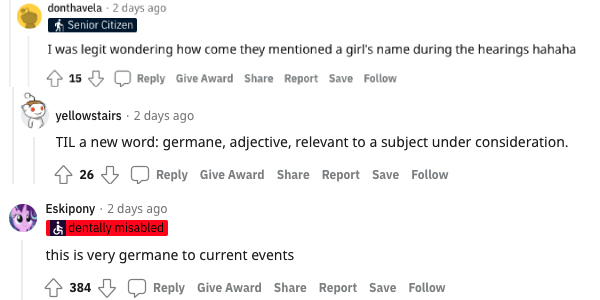 Meaning relevant to a subject under consideration, this adjective can be used in a sentence like this: "With class ending soon, our teacher told us to keep your questions to those germane to today's session."

This is not the first time Minister for Culture, Community and Youth Edwin Tong has used the word. In 2019, he used it in a speech on mediation in Singapore and another time at a dialogue on race in 2020.

When he uttered the word during a recent hearing, some confused Redditors thought they heard a girl's name.

No, it's not Germaine.

All tenor but no bass

When the Workers' Party (WP) chair Sylvia Lim was asked about the discussions made during the Aug 8 meeting, she said the "tenor of that discussion" was not an "instruction giving session".

Some viewers may think that music was being played but most can assure you that didn't happen.

Tenor, at most times, refer to either a singing voice or an instrument, but in this context, it meant the general meaning, sense, or content of something.

In a sentence, you can say: "I was encouraged by the overall tenor of what he said."

Some of us had to listen twice when MP Jamus Lim was asked if the WP leaders’ prior knowledge of former MP Raeesah Khan’s lie was material.

Not that we were hoping for a golden quote from the associate professor and WP Central Executive Committee member but how can a lie be made of cloth or fabric?

In legalese, material means a piece of evidence or a fact that is significant or relevant, especially in determining a cause or affecting a judgment.

In a sentence, you can say: "That information could be material to the criminal inquiry."

The only sis you need is hypothesis

In one exchange, Tong said to WP chief Pritam Singh: “Mr Singh, I am entitled to put a hypothesis to you because we should test the evidence.”

Hypothesis? Four syllables long and with no root word. Catch no ball indeed.

Actually, it simply means a suggested explanation created from limited evidence, and as a starting point for further investigation. Some may even call it an educated guess, based on prior knowledge and observation.

Hypothesis, material, tenor and germane aside, this is probably not your first time getting stumped by a word spoken by a public figure. Highfalutin anyone?

READ ALSO: Say what? Things heard in Parliament that made you listen twice