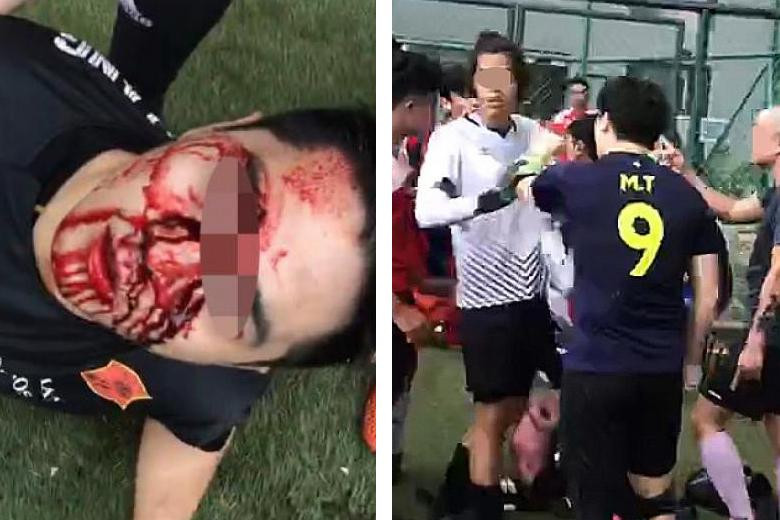 A friendly football match on Sunday between two amateur sides ended on a bloody note, leaving two players in hospital.

A video of the aftermath showed one of them lying on the pitch in shock, blood dripping from his nose, as other players engaged in a shouting match metres away.

Players are seen arguing and shoving each other in the 19-second video, with at least one person hurling vulgarities and challenging others to a fight.

There were also shouts that the injury was caused by a headbutt.

The brawl happened at the East Spring Secondary School field in Tampines on Sunday.

The New Paper understands that the teams comprised players who were Singaporean, Singapore permanent residents and Chinese nationals.

The referee for the match, a member of the Football Referees' Association of Singapore, told Channel NewsAsia that a fracas broke out after a player executed a "flying kick" on an opponent during the game.

A police spokesman said they were alerted to a case of voluntarily causing hurt at 30 Tampines Street 34 at about 5pm.

The pitch had been booked privately through ActiveSG, which manages several sports facilities under the Dual-Use Scheme, including the East Spring Secondary School field.

A spokesman for Sport Singapore, which oversees ActiveSG, said it was aware of the incident.

"It is a shame that what was presumably meant to be a fun game culminated in a physical dispute," she said.

"We are unable to release any further details as investigations are underway."

Former national footballer R. Sasikumar, 43, who runs a sports marketing firm, told TNP yesterday that violence on the pitch at social-sporting events has been a growing trend in recent years.

He said: "There's a lot of testosterone, and all it takes is a rough tackle and someone feels unfairly treated and decides to take things into their own hands.

"The players involved will live to regret their actions."