On Friday (Jan 21), the bodies of twin boys aged 11 were found in a canal near the Greenridge Crescent playground in Upper Bukit Timah. The father of the boys was arrested on Saturday for his suspected involvement in their deaths.
The Straits Times
PUBLISHED ONDecember 01, 2022 1:57 AMByOsmond ChiaJean IauAng Qing

SINGAPORE - The father of twin boys who were found dead in a canal in Upper Bukit Timah on Friday (Jan 21) evening was arrested late on Saturday for his suspected involvement in their deaths.

The police said in a statement at 11.15pm on Saturday that the 48-year-old man will be charged with murder on Monday.

The 11-year-old twins, Ethan and Ashton Yap, were said to have special needs and are believed to be students of a school in the Eng Kong estate area.

Earlier on Saturday, the police said it had received a call at about 6.25 pm on Friday from a man asking for help at a playground along Greenridge Crescent.

When officers arrived, the man’s two sons were found lying motionless in the vicinity of the playground. They were pronounced dead at the scene by a paramedic.

It is understood the bodies were found in a large and deep canal which cuts across the playground in a corner of the quiet and leafy private housing estate of terrace and semi-detached houses.

When The Straits Times visited the area at noon on Saturday, police officers were seen speaking to residents.

Officers from the Gurkha contingent were spotted walking inside the canal, a segment of which was littered with what appeared to be cushions, and combing the forested area behind the playground. 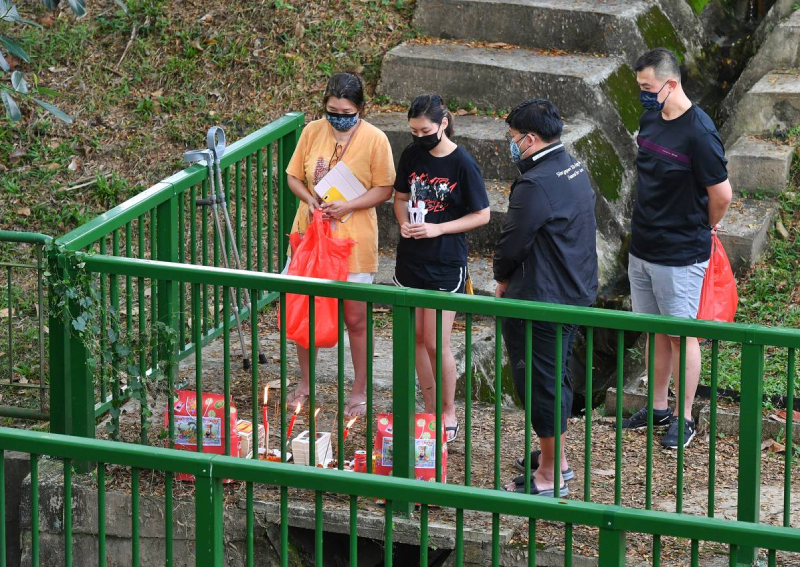 At about 4pm, two men and two women turned up to light candles and leave religious offerings by the canal.

One of the men, identified as Mr Fong Chun Cheong, said that he is a family friend.

He added that he is from Singapore Yin Feng Shui Funeral Services and had been engaged by the boys’ mother to help the family with funeral proceedings.

The others in the group comprised the boys’ sister, who is in her early 20s, and family friends, he said.

“They just want closure and to be left alone… They just want to have peace,” said Mr Fong, 40, a funeral director. He added that he had met the boys before, describing them as “lively and energetic”.

“They were maybe six or seven years old then. I learnt about the incident on Friday and was shocked,” said Mr Fong.

After the bodies were discovered on Friday, an alert was sent out that night to taxi drivers to be on the look out for a man of unknown race, wearing grey shorts and sports shoes, and last seen at Greenridge Crescent at 3pm.

The alert, which police confirmed came from them, has since been stood down.

One resident, who declined to be named, said she saw officers carrying two bodies onto a vehicle at around midnight.

She added that she noticed how, a few hours before the bodies were removed, a yellow car that was parked on the road was towed away.

“It’s quite a secluded and quiet park and it’s beautiful,” she said. But she added that because of mosquitoes, her grandchildren preferred to play in a connecting park.

The playground is surrounded by landed terrace and semi-detached homes.

Residents of Eng Kong estate said the neighbourhood is peaceful and the park is usually quiet in the evening.

One resident, who wished to be known only as Mr Raj, said he exercises frequently at the playground.

The 57-year-old added that he saw police vans and uniformed men with red berets circling the nearby forest when he was returning home at about 10pm on Friday. He was saddened to hear the news, especially as it is nearing Chinese New Year, he said.

“I’ve been here about 25 years and it’s such a safe place for everybody. You can be here alone at night and it’s a safe place.”

The incident on Friday had spooked residents interviewed.

A domestic worker who lives near the playground said she heard a girl shouting for help at about 6.30pm on Friday, just before the bodies were found. The helper, who declined to be named, thought it was just children playing.

But 15 minutes later, she saw police officers in the area, and soon after, they came knocking on her door asking for information. Police and Singapore Civil Defence Force vehicles also lined the streets of the quiet neighbourhood.

Residents said police officers had approached them on Friday night to ask them if they had any closed-circuit television footage of the area.

MP for Holland-Bukit Timah GRC Sim Ann said in a Facebook post: “This is a grave tragedy, and unthinkable especially to anyone who is a parent.

“I know the news is deeply shocking and upsetting to our community.”

She urged residents to avoid speculation and to wait for official information from the police.

She added: “Our thoughts and prayers are with the family of the children who have lost their lives so tragically.”