The debate about whether cyclists should be allowed on the road has been a longstanding one.

This month, netizens found themselves debating roads rules and regulations once again as a cyclist was spotted with an unusual ride at a traffic junction.

The photo shared in a Facebook post on Sept 11 shows a man riding a recumbent bicycle in front of a public bus. Some netizens identified the location as River Valley Road.

A recumbent bicycle places the rider in a reclining position, allowing the rider's weight to be distributed more comfortably across a larger area.

"Where is the flag for his bicycle at the back? [He's] courting death," a netizen wrote.

Some were appalled that such bicycles were travelling on public roads, while others were concerned that these bicycles would pose a safety issue for other motorists, as those driving large vehicles might not be able to see the recumbent bicycles. 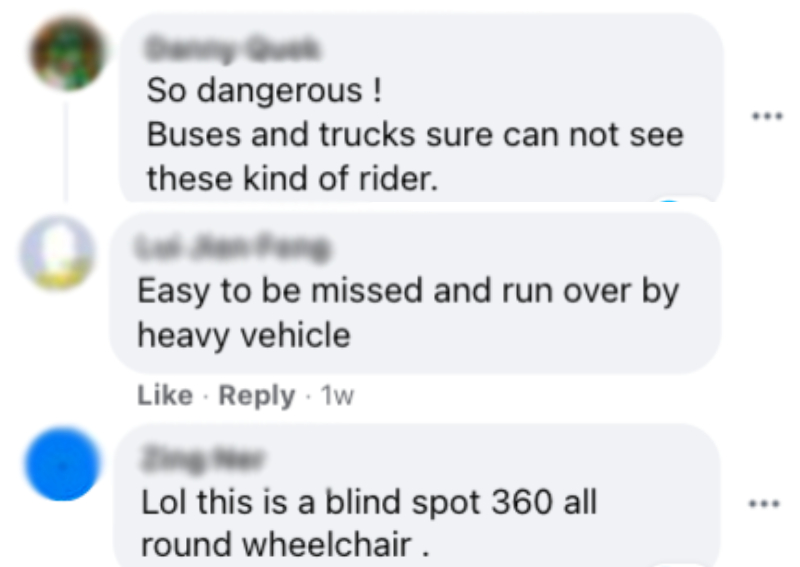 The appearance of recumbent bicycles on the roads of Singapore isn't new, and such sightings have been reported as early as last year.

In March, the Land Transport Authority (LTA) said in a parliamentary reply that recumbent bicycles "are currently allowed on footpaths, cycling paths and park connectors only if they meet safety requirements".

As for whether recumbent bicycles will be allowed on roads, former Transport Minister Ong Ye Kung said in May: "The LTA has received requests from owners of three-wheeled recumbent devices to use them on roads.

"It is currently studying such requests, with safety as our primary consideration."

LTA is keeping an "open mind" about the issue, and will make a decision once the Active Mobility Advisory Panel has completed its review of existing rules for both cyclists and motorists.

ALSO READ: 'This is why we need to ban bicycles on roads': Daredevil cyclist swerving through cars incites online rage