Motorists out on the road, watch out for the glaring light.

A GrabFood rider recently crashed into a stationary lorry at Marina South Pier after he was momentarily blinded by the glare of the sun.

He shared footage of the accident on his TikTok account on Monday (Jan 17), writing: "A week has passed and everything still hurts. It was only a month since I got my bike out of the workshop."

In the clip, the delivery rider noticed the glaring light and slowed down in an attempt to put some distance between his motorcycle and other vehicles on the road.

However, a van travelling ahead of him suddenly switched lanes, which meant that the rider had little time to react as he saw a stationary lorry in the lane. He smashed right into the vehicle.

The impact threw the man off his bike, breaking some of his teeth. He was also hit by a cab while he was lying on the road.

Fortunately, the rider did not suffer major injuries and he is currently recuperating.

Besides wishing him a speedy recovery, some TikTok users gave suggestions on how he could deal with sun glare while riding. 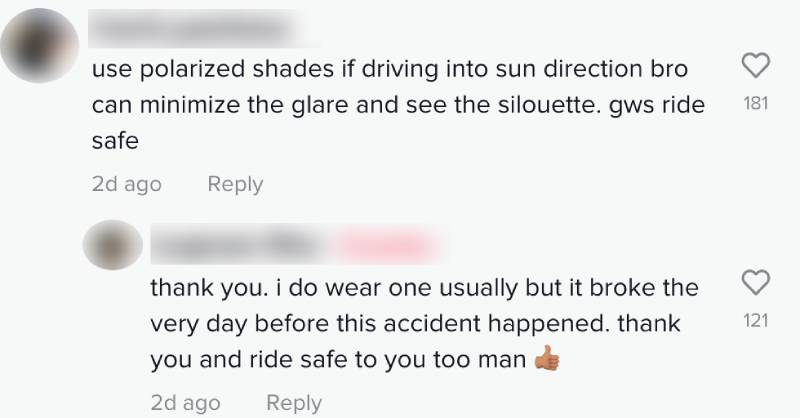 Another TikTok user mentioned that Marina South Pier is notorious for having stationary vehicles on the left and right lanes.

Road users can wear sunglasses or lower the sun-visor when facing the sun, according to a driving theory guide from the police.