A 41-year-old woman found herself desperately clinging to a floating sea barrier after her kayak overturned – suffering cuts to her face, arms and legs – near Sentosa Cove on Monday (May 31).

Chen Geng Xin – who has been kayaking recreationally for 20 years – and her husband originally embarked on a guided Southern Islands kayaking tour with eco-adventure company Kayakasia, as reported in The Straits Times.

The tour group numbered seven kayakers and one guide in four double kayaks, and all were armed with personal floatation devices (PFD).

However, at around 8.05am, one of the inflatable kayaks capsized. Kayakers on another double kayak tried to assist but they too fell into the water near the floating sea barrier off Sentosa Cove.

Chen, a self-employed enrichment services provider, and her husband also tried to help the fallen kayakers but their own kayak soon capsized as well. They were then among a total of six people to have fallen into the water.

"I tried to stay afloat but the current kept sucking me underwater in different directions," Chen told the The Straits Times.

Alarmed, she yelled for help as she and her husband drifted along the barrier. "It was almost impossible for me to stay afloat," she said. "Every time I clung on to the barrier, I got cut by barnacles and the current kept dragging me under."

In a video of the incident uploaded on Facebook by Singapore Marine Guide, one person can be seen drifting in the water near a floating capsized kayak. Singapore Civil Defence Force (SCDF) officers are also seen on the beach.

Eventually, the kayak guides managed to end the ordeal after picking up and helping the kayakers back onto their kayaks.

Authorities later transported them to One Degree 15 Marina on a Maritime and Port Authority (MPA) boat.

SCDF told media that they received a call for help at approximately 8.15am and one person was sent to the Singapore General Hospital. 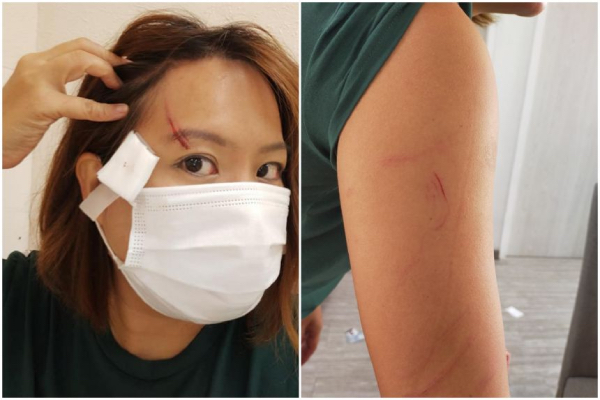 On May 28, a man experienced a near-death incident when he was nearly hauled by the strong current when swimming near Sentosa's Palawan Beach along a floating barrier.

Kayakasia founder Sim Cher Huey said the barriers near Sentosa Cove are a known hazard to water sports fans and that capsizes do happen to both novice and experienced kayakers.

"When a kayak capsizes, qualified kayak guides are trained to help the customer navigate the challenges," he told ST. He also urged kayakers to wear PFDs.

Kayakasia has begun a safety pause for trips to the Southern Islands to review their operations as well as conduct retraining for their guides. They are also reporting the incident to MPA.

Water safety experts said that kayakers should wear a life vest at all times and avoid struggling against an undercurrent when their boat overturns at sea.

Swimfast Aquatic Group managing director David Lim told ST: "Once you fight the current, you will easily lose energy. No matter how good a swimmer you are, it's a losing battle.

"Normally, it is better to let the currents take you to calmer waters."