SINGAPORE -  Two punters, who bought their tickets at Tampines Mall and Orchard Plaza, were the lucky winners of the Toto jackpot prize on Monday (Jan 10).

This comes after snaking queues of punters were seen at Singapore Pools outlets on the weekend and on Monday waiting to buy tickets in hopes of winning the grand prize.

The Toto top prize had snowballed after there were no winners for last Friday's New Year $5 million draw.

The draw took place at 6.30pm on Monday.

Both had snaking queues of 30 to 80 people during lunch hours, with waiting times of between 15 and 30 minutes.

Yellow tape was used to mark out 1m of safe distancing on the ground outside the outlets for punters to adhere to in the queue, to reduce the risk of Covid-19 transmission.

Despite the lack of markings as the queue continued around the neighbouring Housing Board blocks, punters abided by safe distancing rules by staying 1m apart.

People of all ages were seen in the queue, from elderly to young adults.

Many punters that ST spoke to did not have high hopes of winning the grand prize, but had came just to try their luck.

At Tong Aik Huat, a construction worker who wanted to be known only as Mr Singam, 42, said he was there to place bets for his friends and himself despite having only 20 minutes of lunch break.

"I've never won any prizes, but I don't buy Toto that often - only once in two weeks," he said. 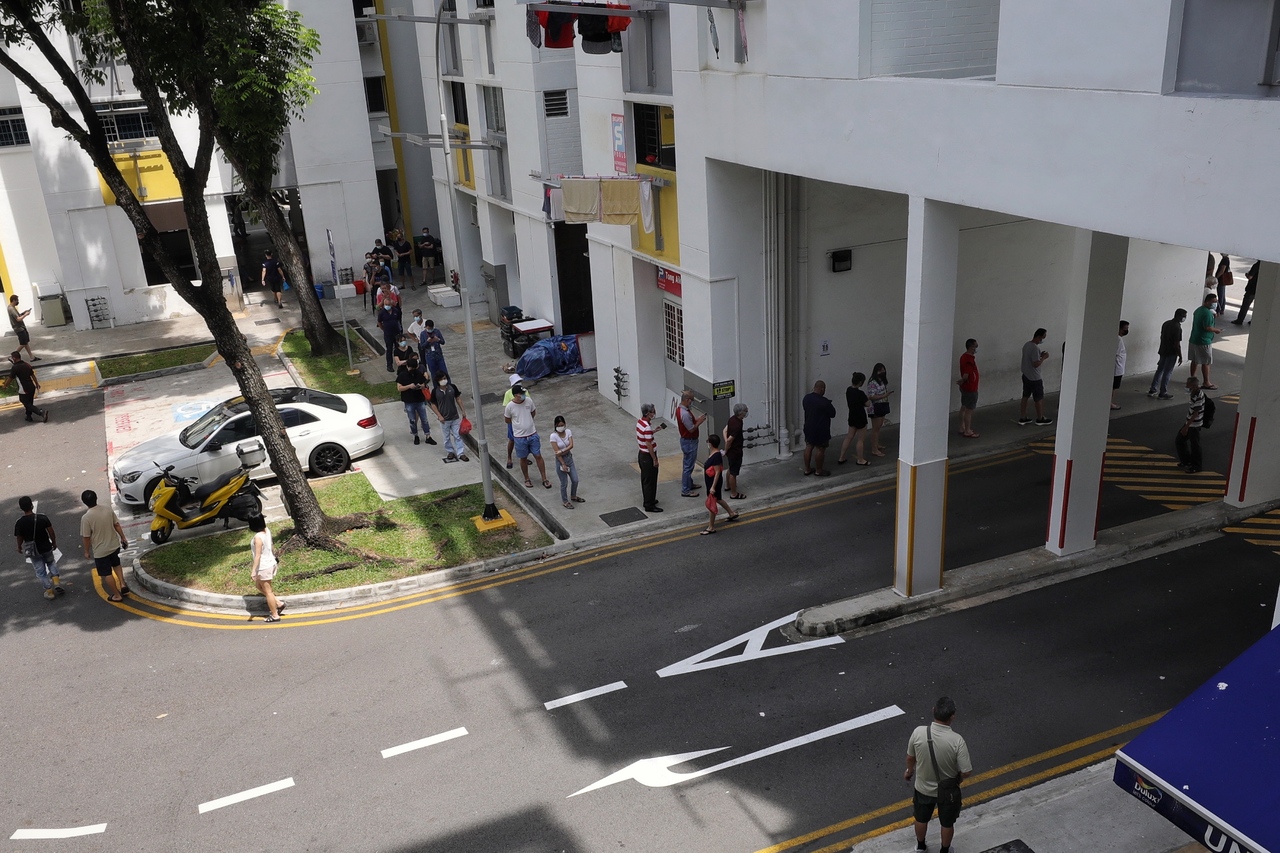 First-year university student Yuki Leong, 22, said she hopes she can donate part of the prize money to charity if she wins.

"I'll use the rest of the money to treat my family to a good meal and save the rest for school fees. Even though the chance of winning isn't high, I just want try my luck as Chinese New Year is coming and the prize money is higher," added the first-time Toto buyer.

At Fatt Chye Heng, a man who wished to be known only as Mr Pang, 49, a construction supervisor, said:"I'm here to buy Toto because sometimes there's not enough money and this time round there will be $8.6 million up for grabs.

"But even if I don't win, I think Toto gives me hope of giving my family a better quality of life, and I think that's the importance of betting at all."

Mr Jurame Rabai, 55, a lorry driver at a logistic company, said he hopes to become a millionaire overnight, but recognises it is "out of his hands".

"Buying Toto depends on your luck, maybe your luck is there or not there, but who knows? Only God knows," he said.

He added that he had placed a bet of about $50 and that he would be happy even with a small win of $40.

Security officer Jaswant Singh, 65, who was at Tong Aik Huat, was equally realistic about his chances of hitting the big jackpot, saying that he has been buying Toto and 4-D weekly for more than 30 years and only managed to win small prizes of about $1,000.

"It's very rare to win big prizes in Toto. But if I win, I'd like to donate part of the money to some charities and give the rest of my money to my children," said Mr Singh, who was able to join the queue as he works night shifts.