If you are looking for a property for investment, which would you pick:

Would you buy a property with a good rental yield but depreciating prices?

A property with decent potential for appreciation but a poor rental yield?

I suppose ultimately, it depends on your investment objectives, but recently a reader reached out asking about a one-bedroom rental investment unit at the Seahill.

So today, let’s look at this case study on the Seahill and see what we can learn from it.

Let me start with some background on the Seahill for those who are less familiar with it:

The Seahill is a condo that was recently built in 2016. It has a total of 338 units and is quite unique in that it offers four different types of unit options. There’s the regular unit, Soho, triplex townhouse, and serviced apartments as well.

But one interesting aspect here is that the townhouses here are eligible to be purchased by foreigners.

This is because Far East purchased the land before the new legislation, so unlike similar cluster home projects by Far East such as the Alana, in which foreigners are required to apply for Land Dealings Approval Unit (LDAU) approval – there’s no such requirement here.

So background aside, one thing that Seahill has going good for it is the facilities: 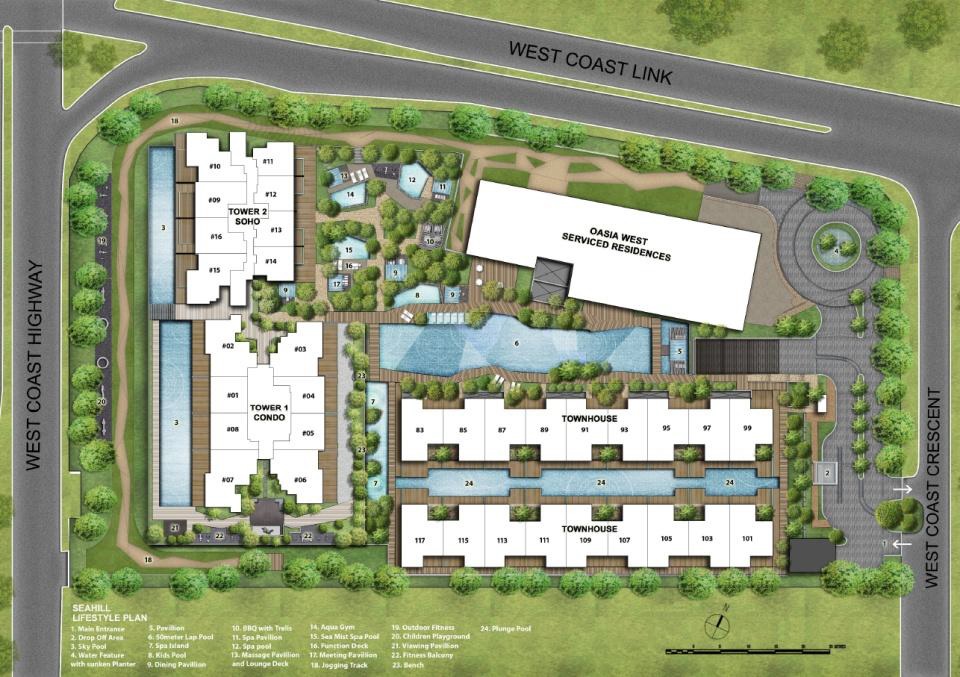 As you can see, the Seahill is very generous when it comes to swimming pools. Each section basically comes with its own pool and so you are never really more than a few footsteps away from one.

While it’s nice that you do have various pools to choose from should one get overly crowded, they are all more or less rectangular in nature – so variety wise it isn’t super different.

Also because there is a tower block, you do have facilities at the top (24th floor) that allow residents to enjoy the sea views too even if they are living on a lower level or a ground floor type like the Townhouse. And playing tennis at that level must be quite something!

Next, it has a location that is well-suited rentability wise: 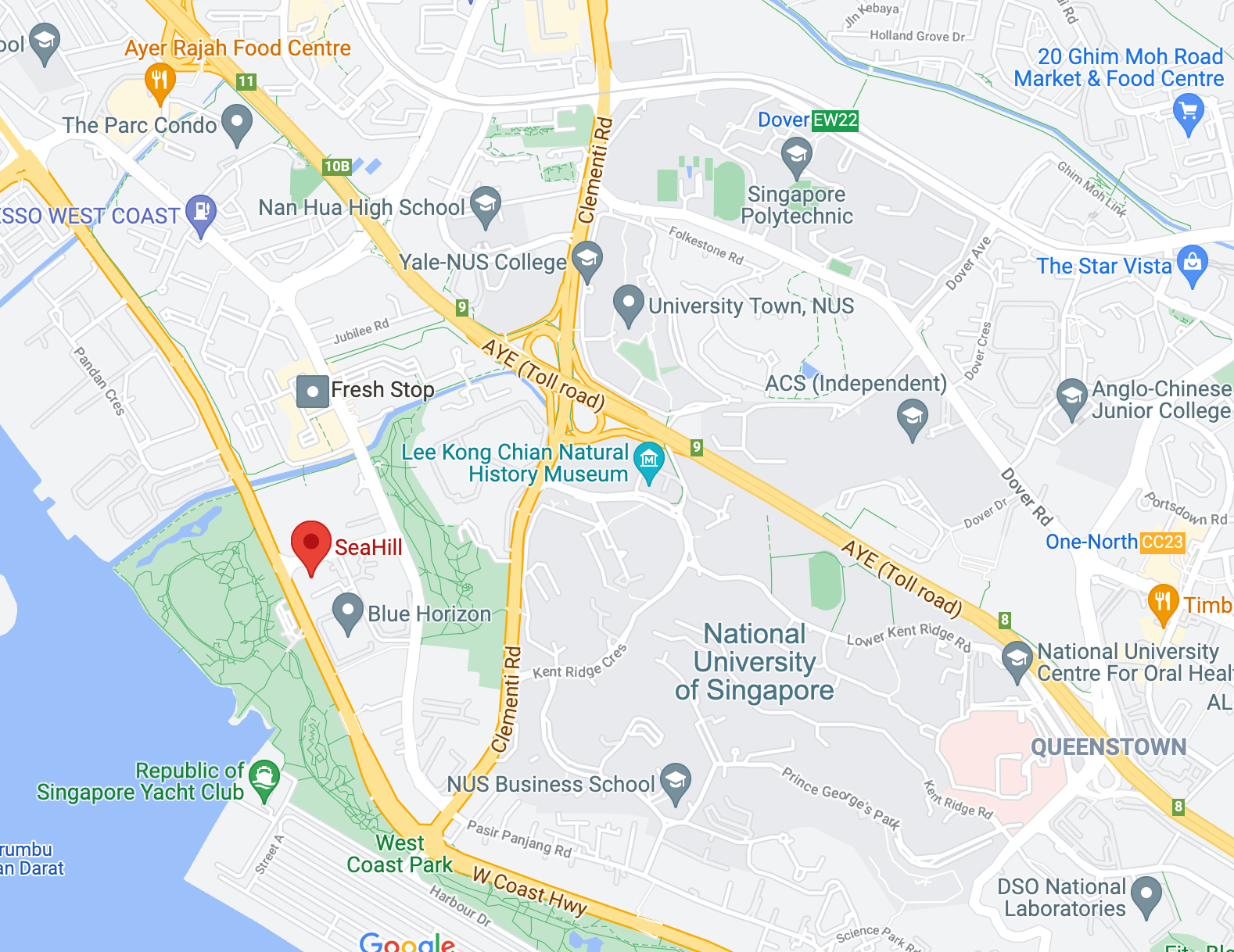 Of course, being so far out in the West, the Seahill isn’t what you’d call a centrally located development. Still, it does offer various perks in its immediate location.

For one, it is located pretty close by to West Coast Plaza and the food centre/market too.

In terms of nature, this is probably as good as it gets as the estate is practically straddled between two sizeable parks – West Coast Park and Clementi Woods Park. Of the two, West Coast Park is a little more famous because of the huge selection of playgrounds for kids and the usually busy McDonalds along with the drive-thru.

So even with the good selection of pools, having this much open area at your doorstep is naturally very attractive to families with young children.

Next, you are closely located to major educational institutes (National University of Singapore), and areas such as the Pandan Loop industrial area along with the Mapletree Business City further down the road. 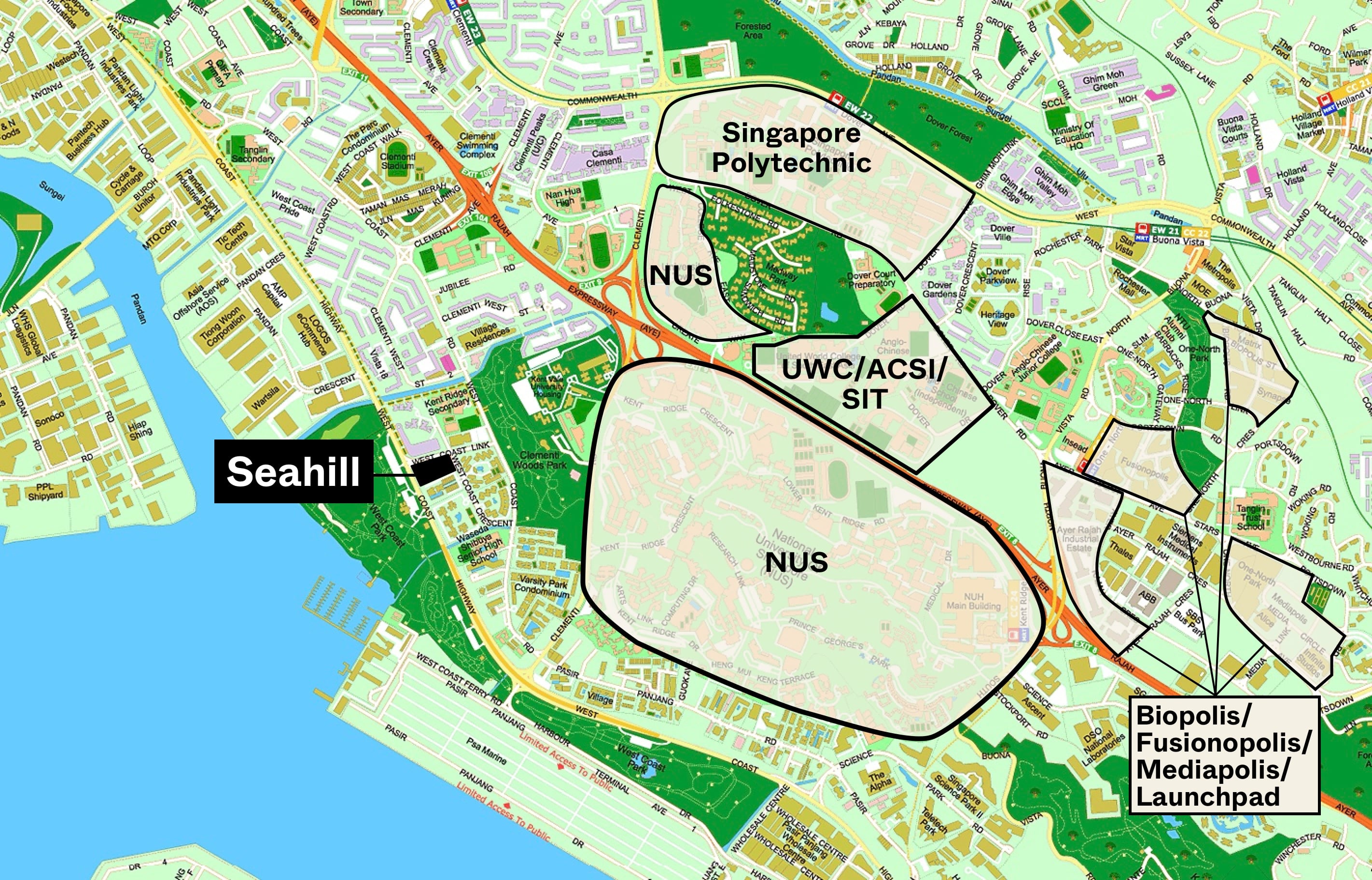 The biggest downside? It isn’t near an MRT station so you are highly dependent on bus services to get to the MRT.

So primarily because of the location and strong facility offering, rentability is high and the rental yield is higher than the market average as well, with current rental yields of around 4 per cent

However, there is a catch. As yield is a function of rental rates and prices, something has to give – and the low quantum here is what makes it attractive in terms of yields. Prices have rather stagnated and some even depreciated since its launch back in 2012: 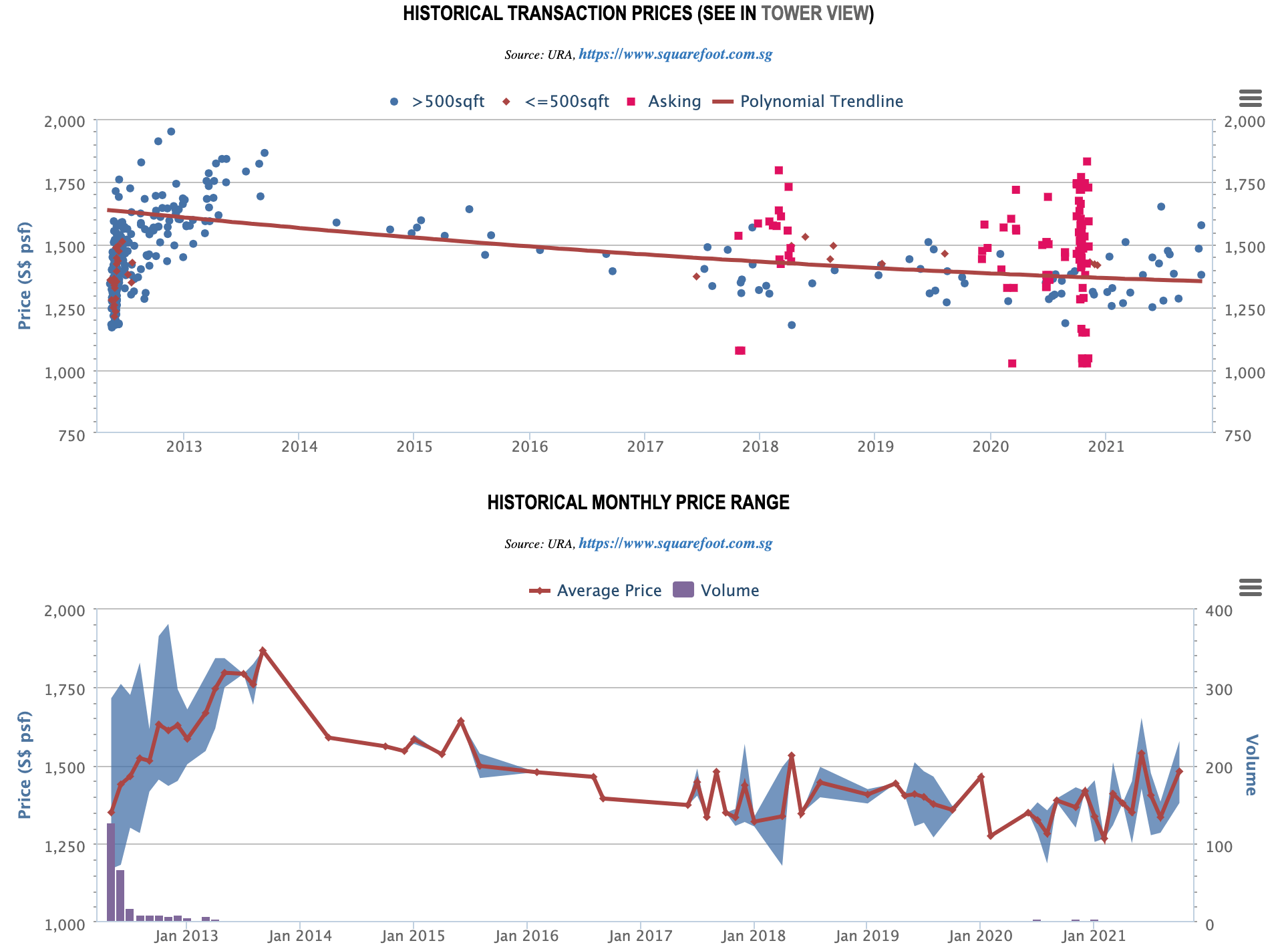 What are some reasons behind this?

For one, it was launched in May 2012 at a $1,3xx psf average which rose to $1,6xx average by the end of 2012 – these were prices that were significantly higher than its resale comparables. Hence, it’s likely that when it was finally built and the end product could not justify such pricing, the resale market could not support this either.

The surrounding resale prices were transacting at $1,0xx psf for the district, which signalled a close to 22 per cent gap between its resale counterparts. 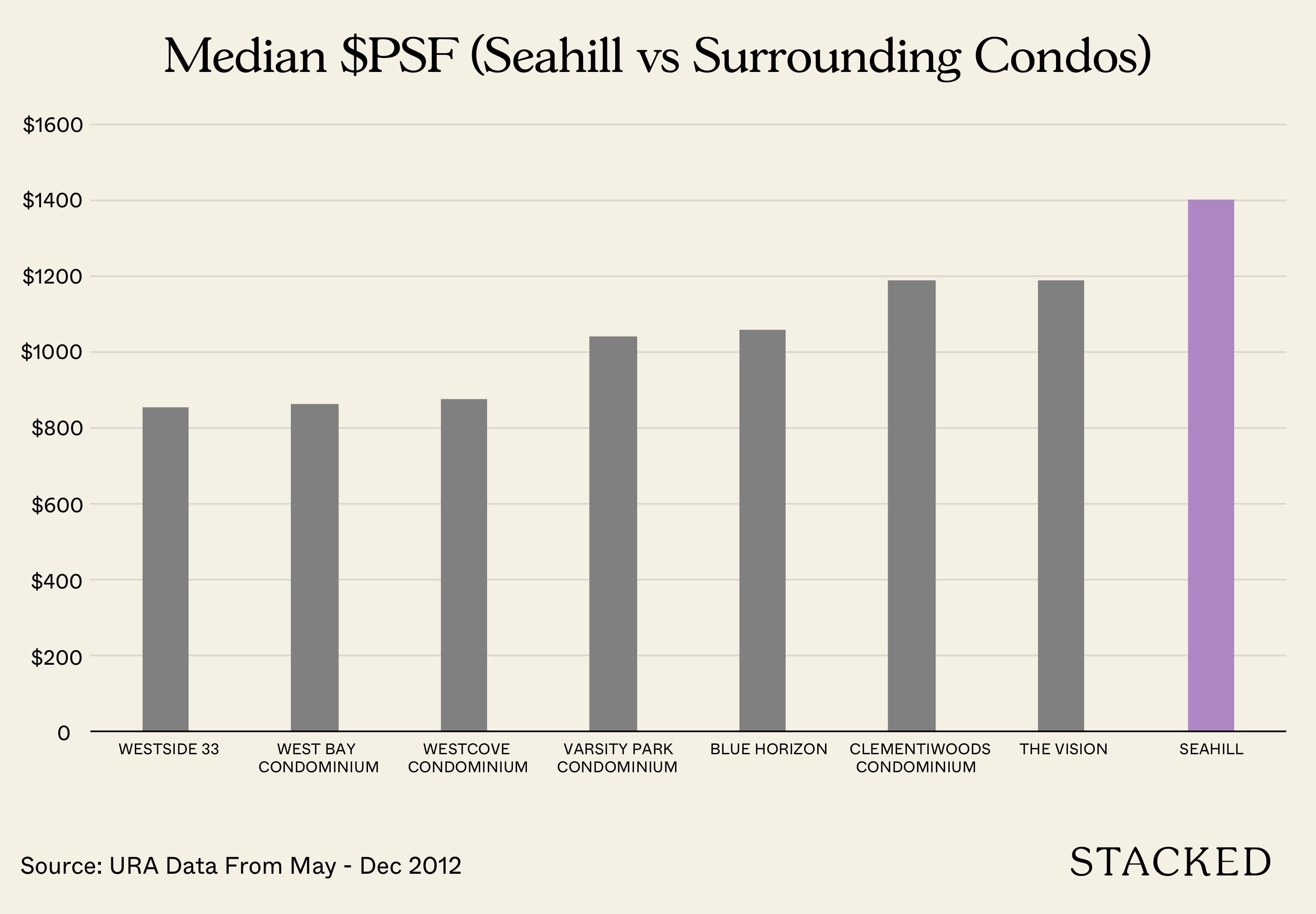 Here’s what prices of resale and new sales looked like in District 5: 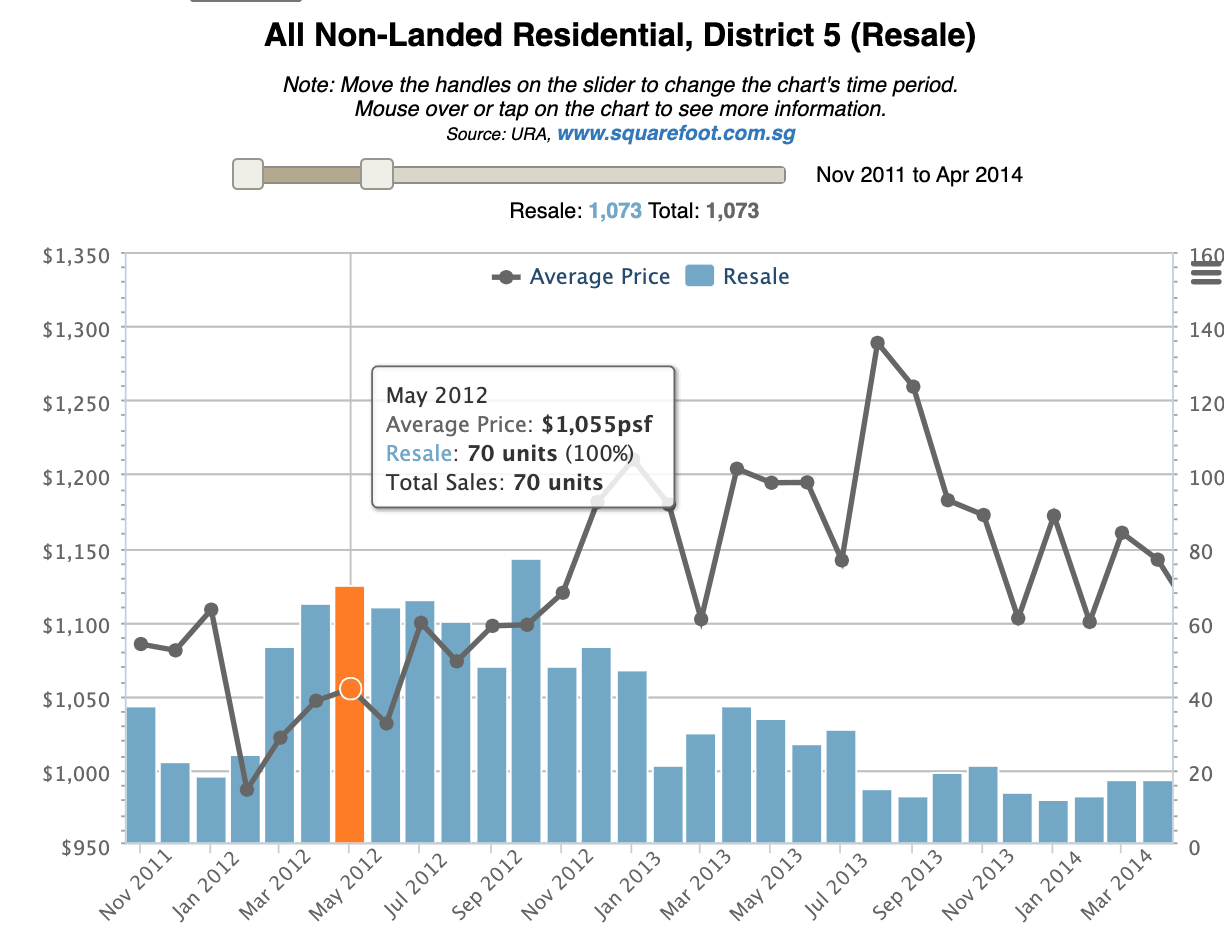 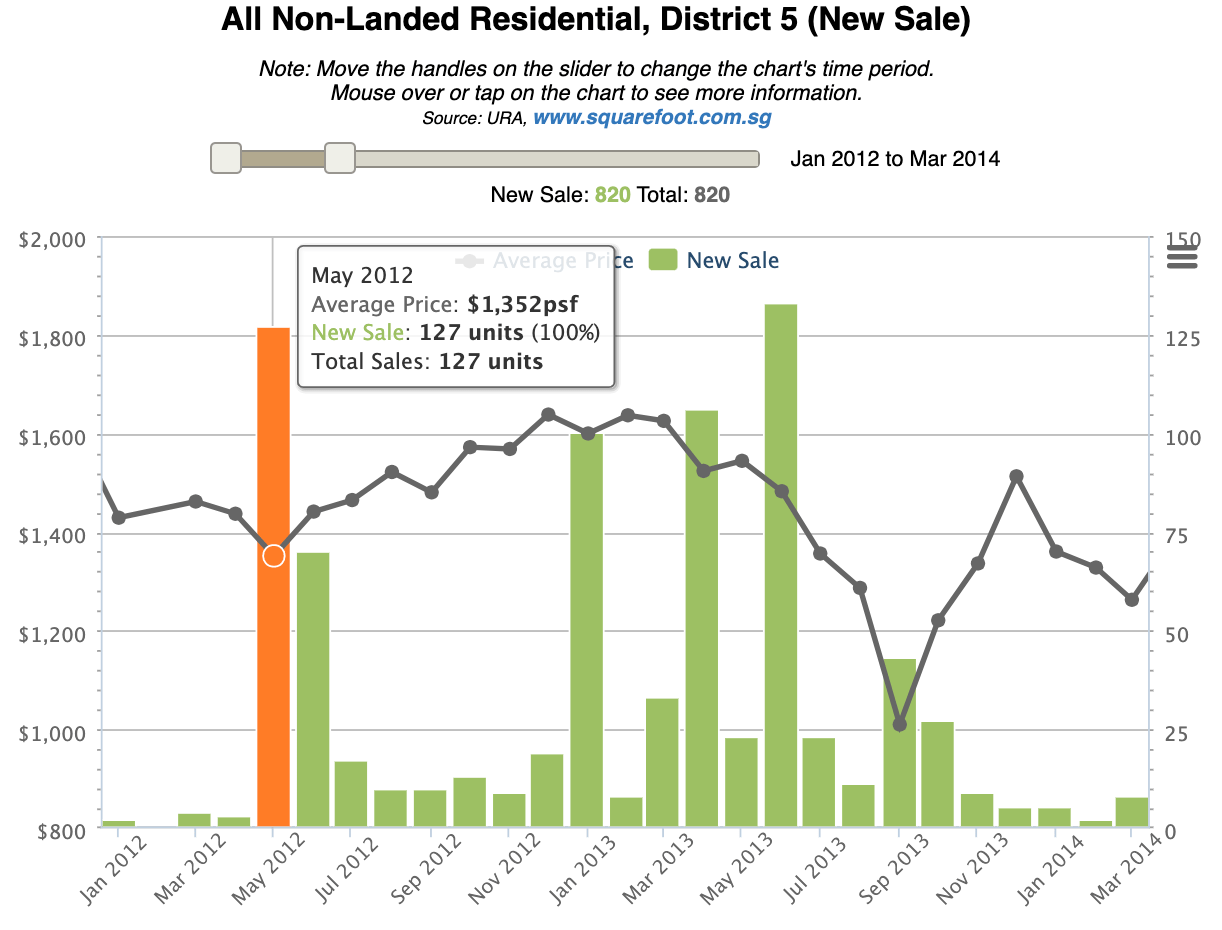 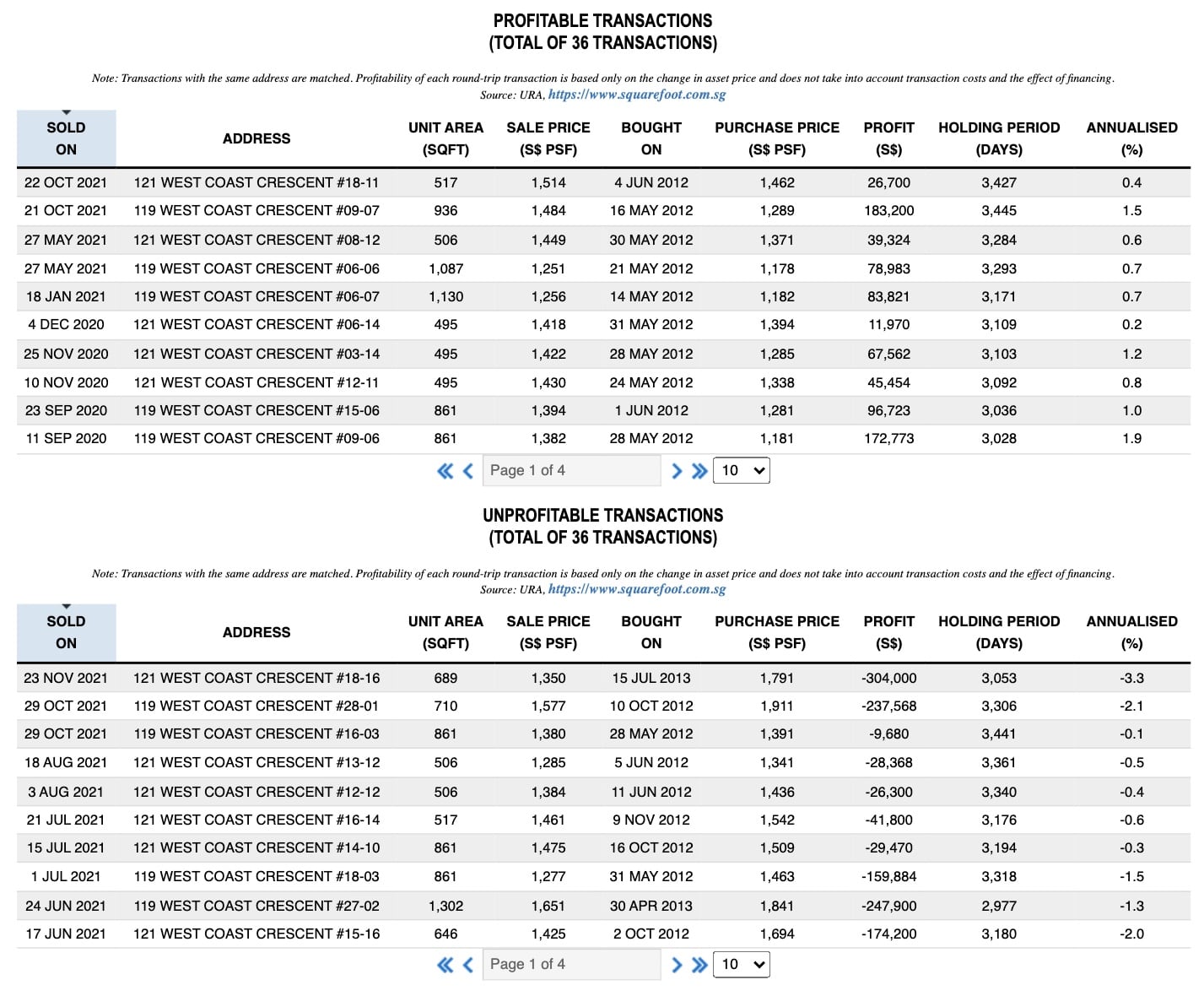 Next, this is likely due to the unfavourable unit layout, a loft unit type that is where it caters to a niche group of buyers. 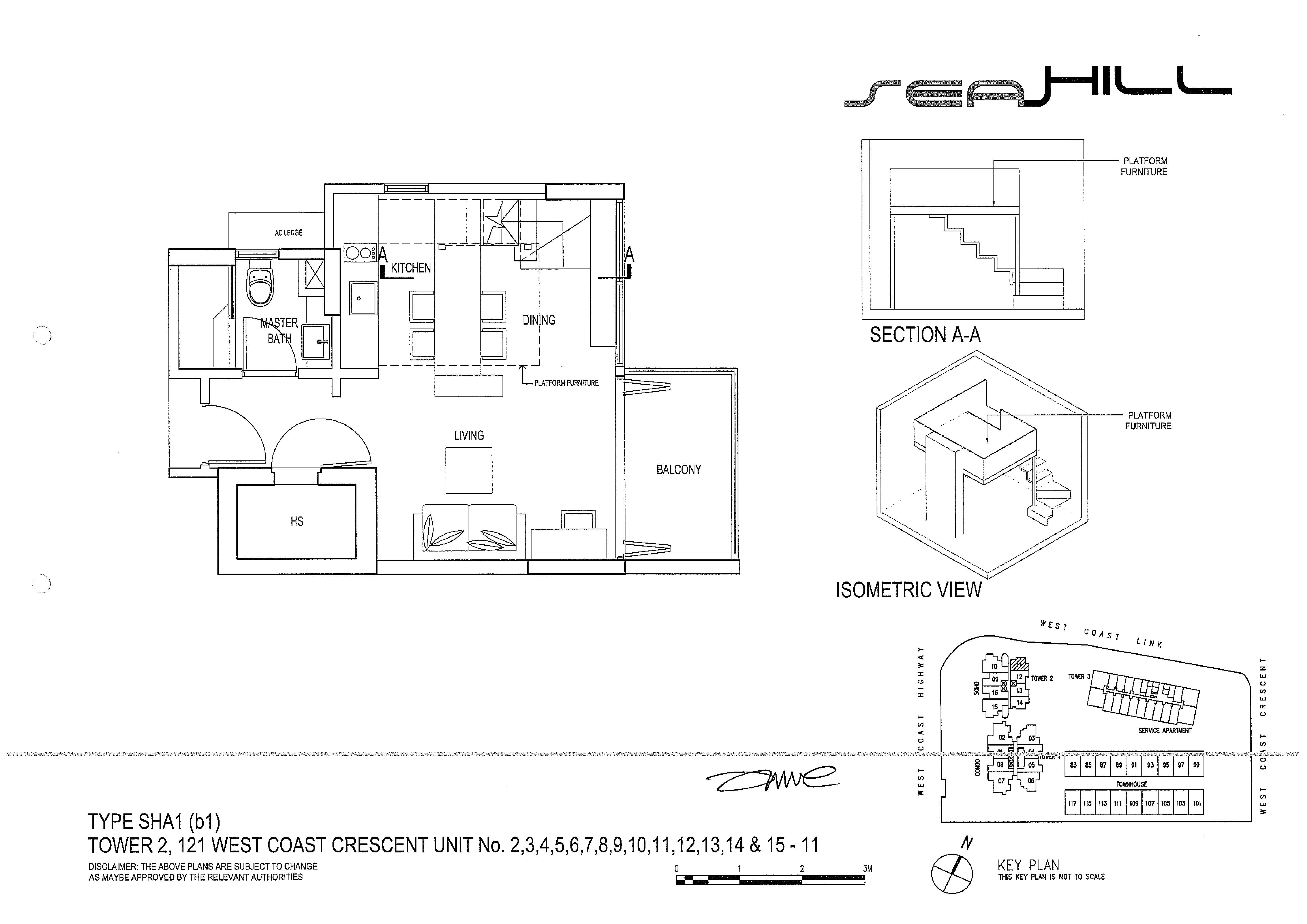 We think that a proper one-bedroom separating the bedroom and living area and not having to climb to the bed would be more preferable – this is based on our experience talking to clients and is evident in pricing behaviours of such unit types (see The Tennery as another example).

Admittedly, the high ceilings are attractive, but it’s just not as practical to live with on a day to day basis, especially with the low headroom in the sleeping area.

Yet, rental rates here have been quite decent. Why so?

If you look at the supply of one-bedders in the area, you’ll find that Seahill is the only condo with this unit type. Other developments around have minimally two-bedders onwards with rental rates of at least $3,000. 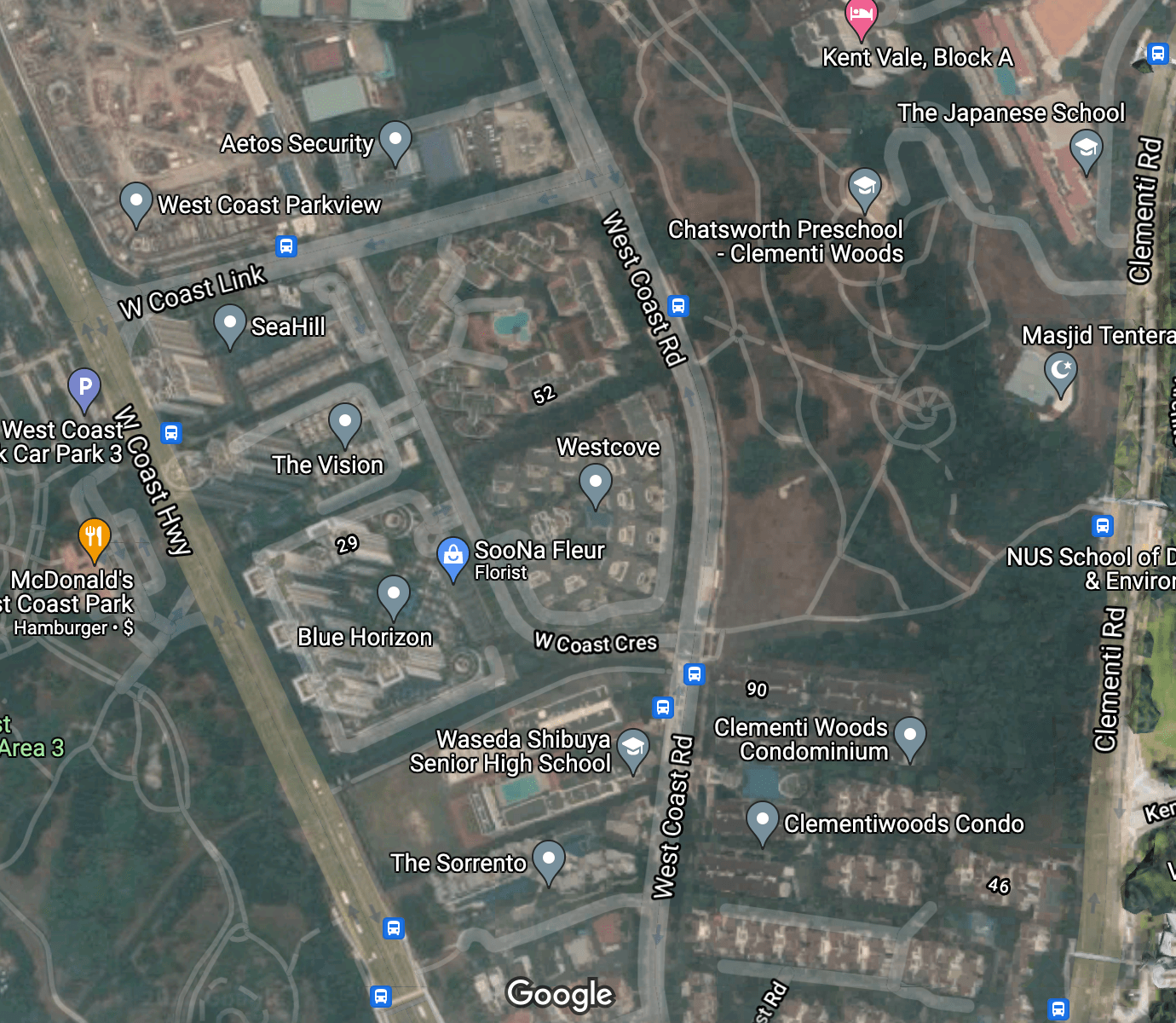 This combination of its location and facility attributes but a niche unit type that isn’t very favourable led to a situation of good rental rates but stagnant pricing. 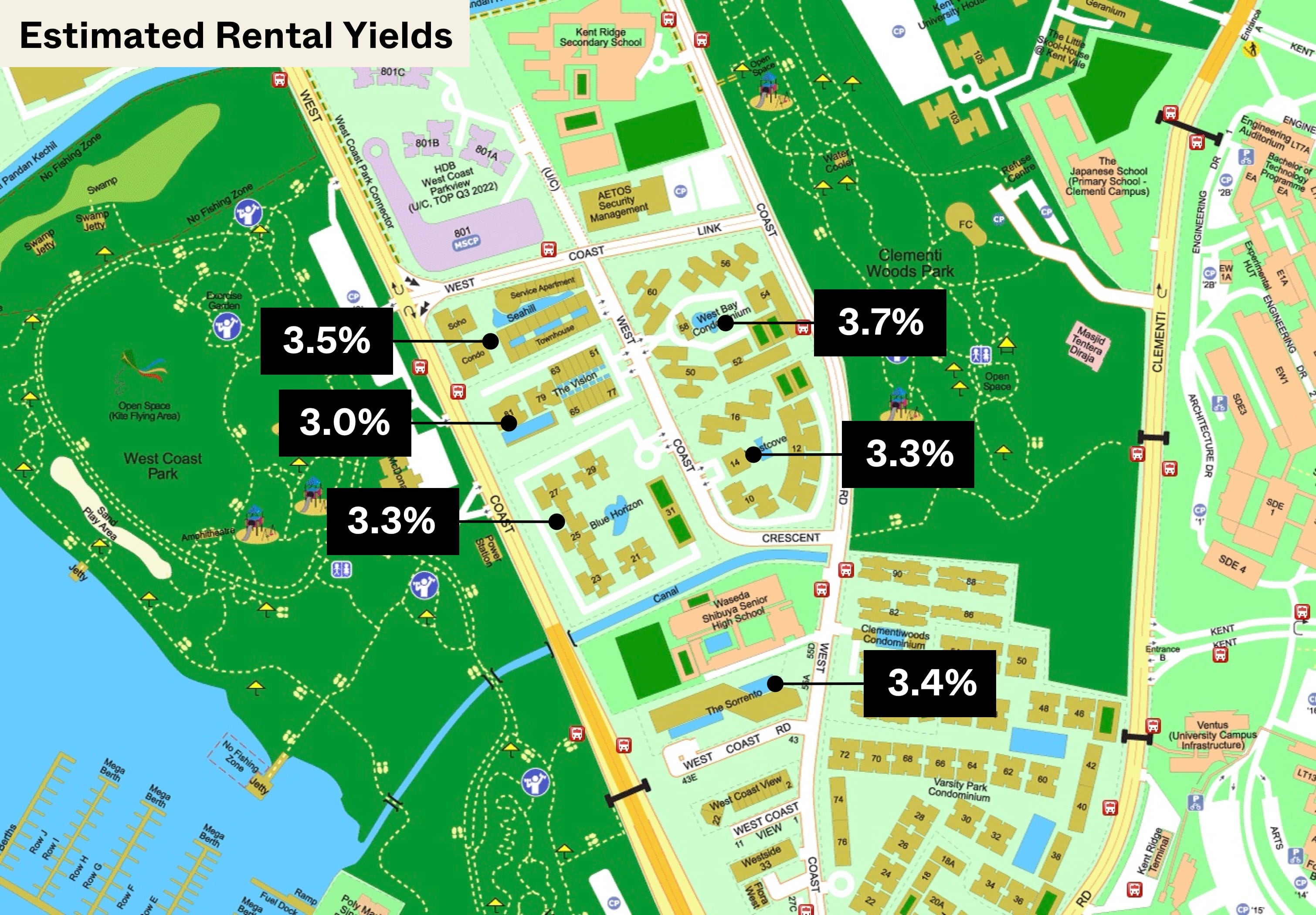 As such, it’s great for rental, but perhaps not so much if you are looking for good capital appreciation.

It goes without saying that properties with good capital appreciation are found in areas where you have more demand than the supply, and prices are driven up as buyers compete for the limited properties available.

This will happen in areas that are close to working areas, with good amenities, public transport and infrastructure (or future growth).

In other words, in good locations that people want to live in.

However, over time because these properties cost more to purchase, rental yields may not necessarily rise along with the demand.