When Covid-19 first appeared, it was assumed that the rental market would be the first to take a hit.

The fears haven’t panned out; in fact, rental rates in end-November were at around a six-year high, and seem to be recovering to the 2013 peak.

The question now is whether it’s sustainable, or just an effect of more people needing their own space during Covid-19: 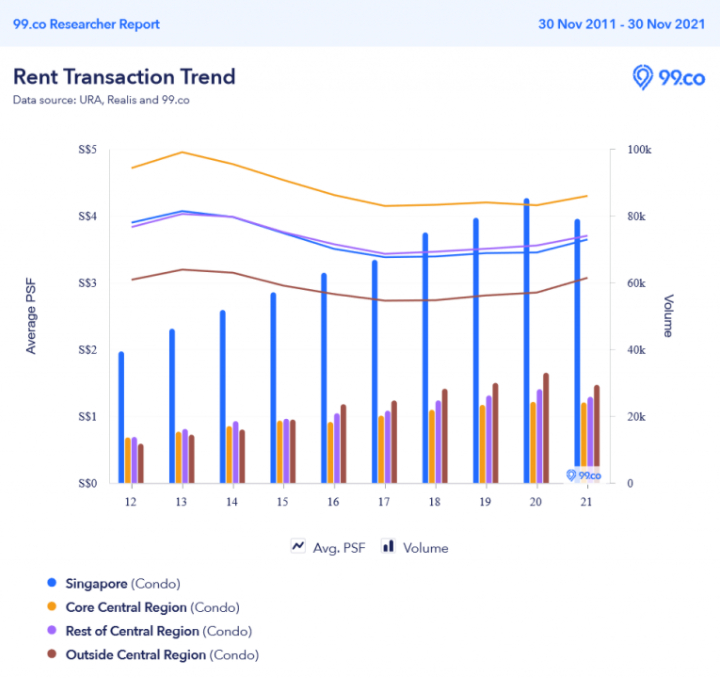 The Outside of Central Region (OCR) has seen the best overall performance over the past five years. OCR rentals averaged $3.07 psf in end-November, and have almost fully recovered to 2013 peak rates ($3.19 psf).

The Rest of Central Region (RCR) performed close to the overall average, while the Core Central Region (CCR) saw little improvement. Rental rates in the CCR were still at $4.30 psf in November, roughly the same as five years prior ($4.31 psf). 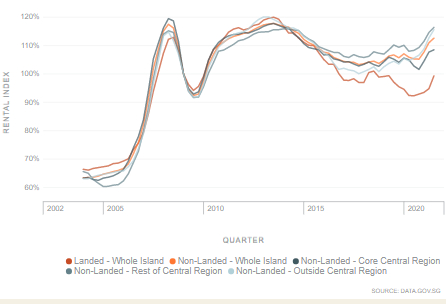 Overall, leasing volumes seem to have fallen since the peak of Covid-19. Lease volumes were at 79,076 in November, down from 85,287 last year; and the drop in lease volumes occurred across all regions.

The Monetary Authority of Singapore (MAS) has also chimed in, noting that rental rates for private housing rose 7.1 per cent in the first three quarters of 2021 alone.

MAS has said that should the vacancy rate decline further, it could trigger a sharper increase in rentals.

Can the momentum be sustained?

Predictions are difficult, as pandemic issues can cause the situation to turn on a dime. However, most realtors we spoke to agree on the following:

First, the Additional Buyer’s Stamp Duty (ABSD) was raised by an additional ten per cent, for foreign buyers; they now pay an added tax of 30 per cent of the property price or value (whichever is higher).

Second, the Total Debt Servicing Ratio (TDSR) was tightened by another five per cent. A home buyer’s loan repayments are now capped at 55 per cent of the borrowers’ combined incomes, inclusive of other debts such as car loans, education loans, etc. For some buyers, this will necessitate a higher cash outlay (i.e., a bigger initial down payment, to reduce the monthly loan repayment).

This could drive such buyers to rent for a time while amassing the higher capital needed.

The majority of renters in Singapore are foreigners, with affluent expatriates making up the bulk of those renting private condos. Given the now higher ABSD for owning a home in Singapore, some might reconsider purchasing a unit and favour rental options for now.

It’s also common for many buyers to put purchases on hold, and take a wait-and-see approach following cooling measures. This may cause some foreign buyers to extend their lease, rather than to buy this year.

It’s still too early to quantify the impact of new cooling measures on the rental market, but all signs point toward the landlords’ advantage.

2. High resale flat and condo prices are a contributing factor

As you may have guessed from the need for cooling measures, property prices are at a 10-year peak across the board. This includes prices for resale condos:

Homebuyers who need a place to stay, right away, can’t wait out the longer construction times (see below). As such, they’re forced into the resale market, where they can move in right after renovating.

But with resale prices at a peak, and tighter TDSR limits, buying a reasonably-sized unit may be out of the question for some. As such, those who need to move out right away have only one option; and that’s to find somewhere to rent.

For now, continued high prices in the resale market can only play into the landlords’ favour. This applies to both private as well as resale flats (resale flat prices are currently at an eight-year high, and rising).

Construction delays are now an accepted fact, due to restrictions on S-Pass holders. It’s also expected that, with the new Omicron variant of the virus, we could see tightened access and a continued manpower crunch. 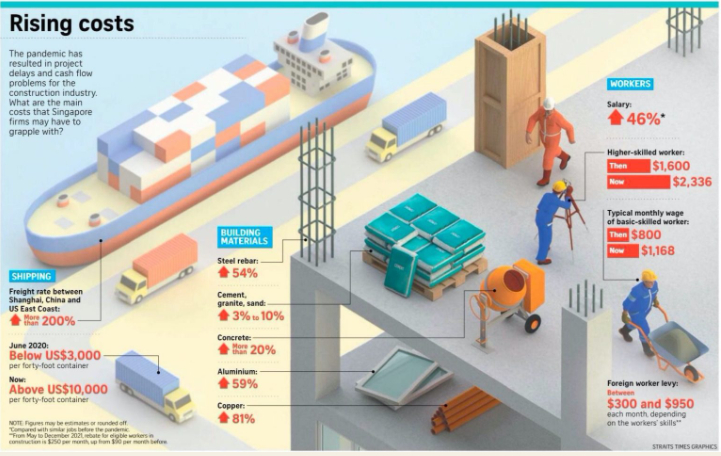 Besides labour issues, contractors and developers are facing increased material costs or even outright lack of supplies as overseas suppliers shut. It takes time to develop new supply chains, which also contributes to delays.

Buyers of new properties (both new launch condos and BTO flats) could face delays, and this could mean having to rent or extend their lease.

4. More upgraders will sell before buying

The recent cooling measures raised the ABSD rate to 17 per cent for Singapore citizens. While ABSD remission is possible under some conditions, it is payable within two weeks of buying a property. 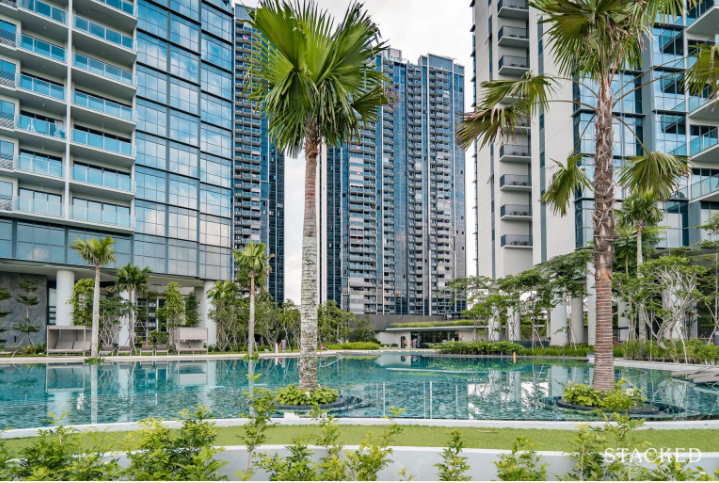 This brings a lot of headaches to upgraders, who want to buy a new condo before selling their flat; issues such as having to service two home loans, and the risk of losing the substantially higher ABSD, if they fail to sell their flat within the six-month time limit.

Most of the time, however, those who sell their flat before buying will face an interim period, where they need temporary accommodation. This interim period will also be stretched, if construction takes longer than expected (see point 3).

Realtors on the ground are expecting that, with fewer upgraders now daring to buy before they sell, we will see increased demand in the rental market.

5. A possible exodus from the CCR into fringe areas

With rental rates rising, and companies becoming more stringent with cost controls, some expats may see housing allowances shrink. This could cause a migration from CCR rental homes, into the RCR; or even into regional hubs like Tampines.

Realtors warned that in Singapore, tenants are more willing to do this, because of the country’s small size. One of them explained that: 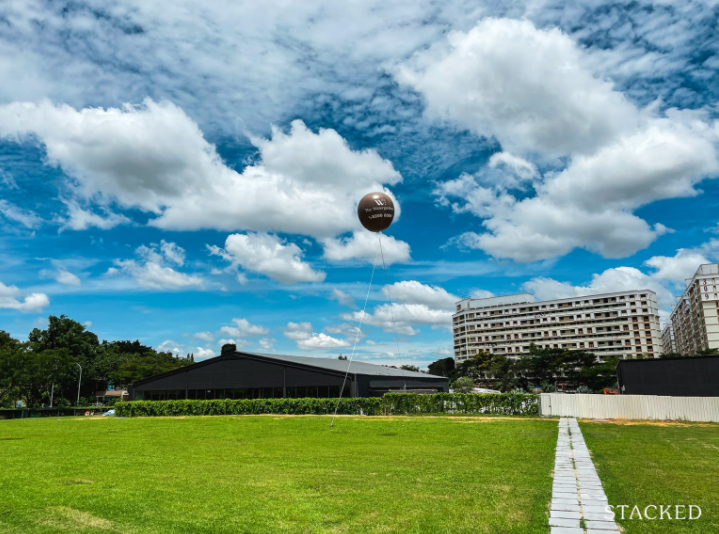 “Singapore is not a big country, where moving to a rural area with cheaper rent is a major inconvenience.

In Singapore, even if you have to move all the way to Tengah, at worst you’re just over an hour from the CBD even by public transport. Most expats drive – so what’s the distance between Novena and Raffles to them? At most another five minutes drive, and for that, they save so much on rent.”

Note, however, that this is not the main reason the OCR has outperformed so far; it is simply that, for those waiting for their homes to be built, or who can’t afford their own place yet, the OCR is the most affordable region (this includes locals).

Overall, all signs point toward a continued uptick in rental markets

This is on the basis that we don’t see any big swings, such as another circuit breaker and new crackdowns on travel; or a sudden downturn that makes home prices significantly more affordable (improbable, as Singapore sellers have few reasons to budge, and are rarely over-leveraged).

Tenants in the current market might want to consider longer leases to lock in good rates, as and when they find them. Those nearing the end of their lease should expect the dreaded “talk” with their landlords, who are likely to push for increases.