The characters on The White Lotus (like Nicole, played by Connie Britton) may be on holiday, but what they wear on the show says a lot about each of them.
PHOTO: Mario Perez
PUBLISHED ONAugust 18, 2021 4:29 AMByAnnie Brown

It is almost certainly true that obnoxious behaviour is exponentially worse when done in a garish Hawaiian shirt. Or maybe that’s just the default setting for people, especially very rich, entitled (and white) ones, when they are on all-inclusive holidays in tropical locales.

Welcome to The White Lotus resort – Hawaiian setting for the eponymous HBO series – where your worries, self-absorption and obsession with status and attention will stay with you even when you have absolutely everything, and everyone, at your disposal to make them all melt away.

Mike White, creator of the critically acclaimed series Enlightened, is back with another squirm-inducing examination of class, race, gender, ambition and – the spikiest of all – privilege.

The White Lotus is a six-part series and follows an assortment of rich American tourists and the staff employed to serve and coddle them.

The show begins with real estate bro and mummy’s boy Shane (played by Jack Lacy), who had been honeymooning at the hotel with his new wife, Rachel (played by Alexandra Daddario), at an airport watching a box on which “human remains” is written being loaded onto a plane. 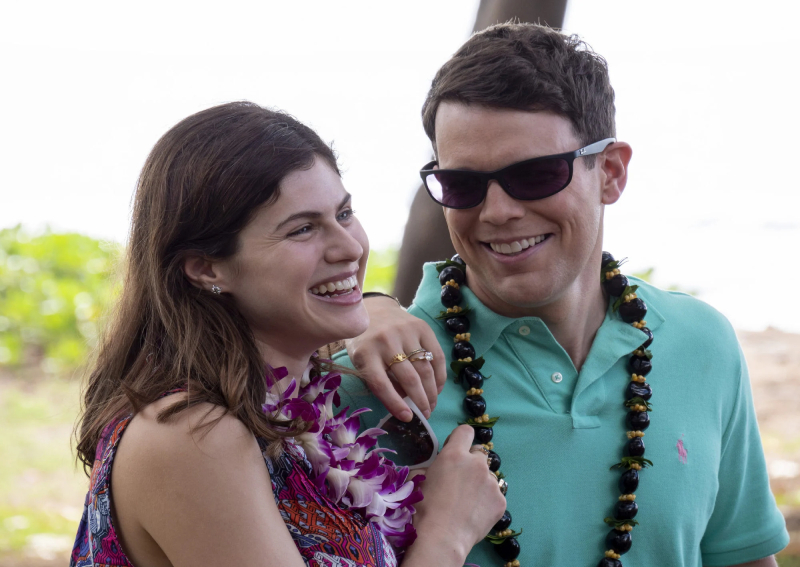 So we are left to try and work out who’s in the box. But, really, it is the claustrophobic atmosphere in which rich people move, and their rich people problems and poor people with other problems interacting at the resort, that is the most interesting.

Biting satire has perhaps never had such an inviting setting.

At the resort, the clothes the guests wear say much about them. Holiday clothes – especially the kind chosen specifically to be on-theme with the kind of holiday and indeed life you want to lead – tell us much about who we are.

As the show’s costume designer Alex Bovaird told The Wall Street Journal: “When you’re in a resort (setting), you can take more risks because people dress more brave, have tans, they’re free.”

Bovaird found many of the show’s costumes in the Neiman Marcus department stores and boutiques in wealthy suburbs of Orange County, California, as well as a boutique in the Four Seasons Hotel in Maui where the show is set (it was filmed in a Covid-19 bubble).

The outfits look authentic for these kinds of people – expensive but not pre-ordered new-season chicness from Moda Operandi.

The printed shirts and “vacation” kaftans aren’t worn with any sense of irony or the in-the-know-ness of true fashion types (think style icon Jeff Goldblum and his thing for campy, colourful Prada bowling shirts).

Sometimes, we learn more about people on holidays because they feel they have the chance to be someone else. By the pool, hopelessly exposed, guards can come down a little. Yet every box-fresh Hawaiian shirt or breezy beach cover-up is a dead giveaway.

Her collection of perfectly put-together resort wear ensembles – all flattering kaftans and wide-brimmed hats to pair with her Louis Vuitton Neverfull tote and the US$75,000 (S$102,000) Piaget bracelets (bought by her husband as a “sorry I cheated” gift) that become a major plot point – speaks of a stylist carefully choosing all of her outfits and packing them into coordinated packing cubes under barked directives from Nicole.

She is ready for a “Zoom call with China” at a moment’s notice. Never switching off, even on holiday, is absolutely Nicole’s aesthetic.

Rachel, Shane’s beautiful new wife, is a middling freelance journalist who has married into money and is now questioning whether it is all it’s cracked up to be.

Her flippy little beach cover-ups, lace chemises, matching PJs and Goyard tote fit with the sense she is trying too hard to fit into her new life but at the same time isn’t sure she even wants it and the trappings it comes with.

He wears leisurewear but he can’t relax because he’s obsessed with the idea that the resort’s manager, Armond, has cheated him out of the hotel room that he (mummy) paid for. 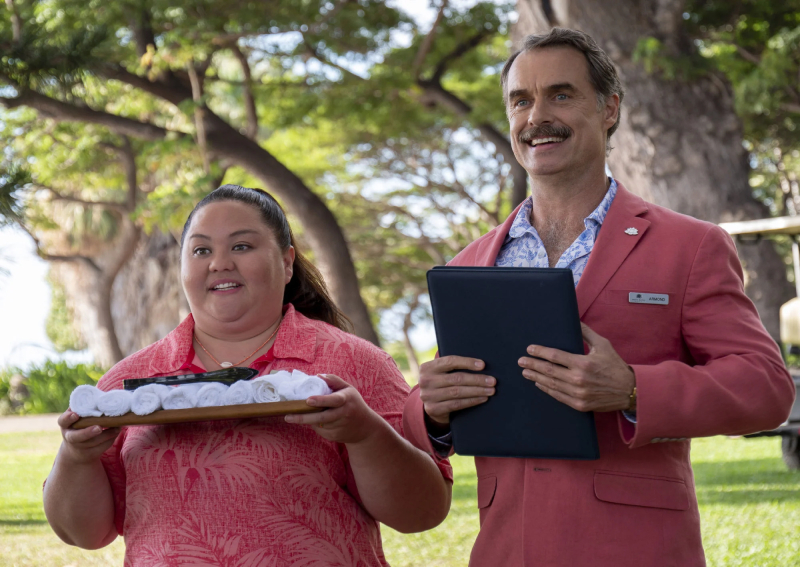 Guys like him, as Naomi Fry pointed out in The New Yorker, are always on guard for people ripping them off, and also, status is everything. His Gucci loafers, his Cornell university hat, his pressed polo shirts, all of these signifiers emanate this.

The way fashion is used as a signal that you belong to a certain group and that it says something about you is particularly well shown in Nicole’s daughter, teenager Olivia (Sydney Sweeney), and her friend Paula (Brittany O’Grady). 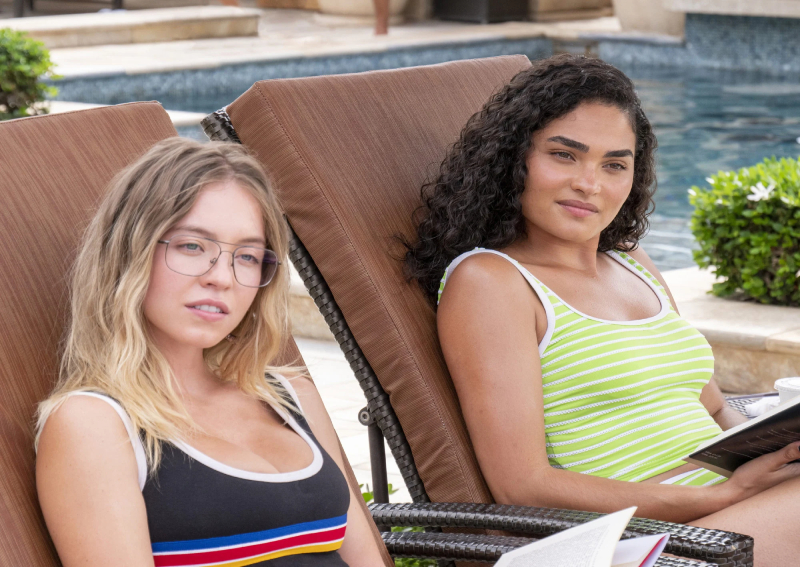 Super woke and very mean, they read Friedrich Nietzsche and Sigmund Freud poolside (“we have a stylist pick our outfits and then we have a book stylist pick out our books,” Olivia tells Shane drolly – though who among us isn’t guilty of packing a book prop, that particularly show-offy genre of holiday read?).

The pair’s outfits are, as Bovaird told Popsugar, pure Gen Z in the haphazard mix of vintage, festival fashion – think crop tops and Free People lace cut-out dresses – and luxury. Yet it is all forensically pulled together in a very calculated way.

Olivia’s Givenchy pool slides are just one of many signifiers that she is a very privileged teen who despises privilege in theory but would never give it up.

As her father, Mark (dad-style board shorts) says during one tense family dinner, nobody cedes their privilege anyway. Everybody at The White Lotus understands that. 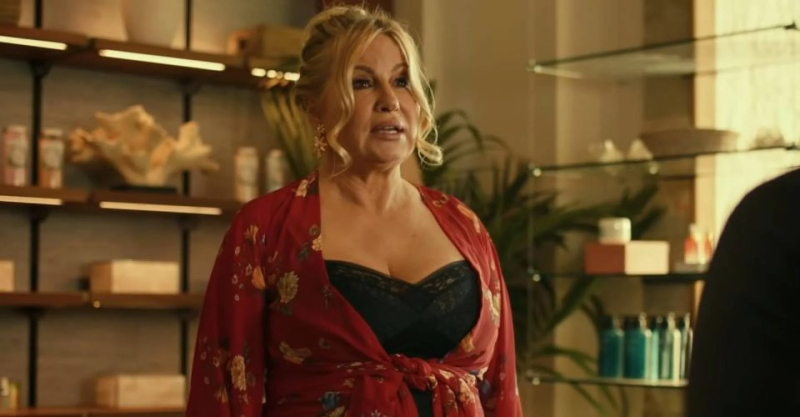 Tanya is a character who, like many of Coolidge’s previous roles, could have been a caricature. Yet Coolidge gives this lonely, wealthy woman who wafts about in eye-watering embellished kaftans and robes – and who is barely tethered to reality and normal interactions with people – pathos.

And perhaps that’s the unavoidable truth about holiday dressing: no matter how many kaftans you pack, no matter how gauche your printed party shirt, wherever you go, there you are. None of us can really truly escape.