We've all heard of the age-old philosophical question: if a tree falls in a forest and no one is around to hear it, does it make a sound?

Here's another question I've been pondering: if you buy a virtual dress that you can't touch or try on, does it really exist?

While one of the most exciting parts of splurging on clothes is the satisfaction of actually wearing them out, there are some who are paying for US$12.99 (S$17.77) Gucci sneakers and £7,800 (S$14,133) gowns that are essentially pixels on a screen, painstakingly edited onto their bodies by 3D artists.

Well, according to James Gaubert, the founder and creative director of fully-digital fashion brand Republiqe, there actually are tangible benefits to spending your money on clothing that will never make it to your wardrobe.

Right off the bat, James, 42, cites sustainability as the biggest reason to go digital.

"Because our clothing doesn't physically exist, it is as sustainable as sustainable clothing can ever be," James, who has some 20 years of experience in the fashion industry, explains to AsiaOne.

A huge factor behind the launch of Republiqe in August 2020 was James' first-hand experience visiting factories and manufacturing plants in Cambodia, Vietnam, Thailand and Indonesia.

Seeing the damage that was being done to the environment and the unethical working conditions hit him hard, he says.

"It makes my hair stand on end just talking about it," he adds.

I have to admit, I've definitely been guilty of impulse buying and dropping way too much on clothes at fast fashion brands in the past. I've also spent more money than I'd like on microtrends that last for less than a season.

But, for some reason, I find myself reluctant to spend my money on a digital outfit that I won't physically have.

When it comes down to it, I suspect that a part of this hesitation is the idea of wanting to get what you pay for, and being able to inspect the fabric and finishings of a garment before deciding that it's worth the money.

However, James makes several good points in support of virtual fashion. Besides mitigating the fashion industry's notorious impact on the environment, digital fashion also doesn't rely on sweatshops, nor does it discriminate against different body shapes and sizes.

"I guess ultimately, we're kind of built and designed to address the the challenges that there are within the industry today," James muses.

For all the ethical and moral plusses though, James is realistic when we probe more about the main consumers of his clothing. For the Gen Z women that make up the bulk of James' clientele, the sustainability aspect is just a "nice to have".

"The main reason is they want to look good online."

The first is pretty self-explanatory — most of us wear clothes to keep warm and to avoid getting arrested for public nudity.

As for the second, James says it's linked to the desire to look good and feel good.

This is where digital fashion comes in, replacing those statement pieces that you might wear only once for a photo or two.

"We're not saying, you know, ditch clothes and walk around naked. But if consumers shift just some of their spend away from physical to digital clothing, we're gonna see a positive impact on the environment."

Instead of buying a piece of clothing for the 'gram, wearing it once and chucking it out, digital fashion stores such as Republiqe, The Fabricant and Replicant are offering their virtual outfits as alternatives, where you can 'wear' different looks without contributing to fashion waste.

We try on a digital dress

While digital fashion is said to be one-size-fits-all since it's a virtual asset that's 'tailored' to each customer by a 3D artist, I've pretty much only seen it on digital models, actual models and fashion influencers.

I enlisted my colleague Jannah Zainol to try out some digital fashion pieces from Republiqe with me to see if it's all its cracked up to be.

The first step was to take some photos for our virtual fittings, which turned out to be easier said than done.

According to Republiqe's guidelines, photos should be of good quality, with even lighting. You should also be wearing "as little clothing as possible" or clothing that is skin tight, at the very least.

As someone who usually takes about 20 #OOTD shots for the 'gram before finding one that I'm semi-okay with, it took me a while to get warmed up in front of the camera. This was mainly because I felt a little awkward about the fact that someone would be spending a good amount of time staring at my picture and editing it.

After we sent our shots over to Republiqe, it took just a couple of days before we got the final images. 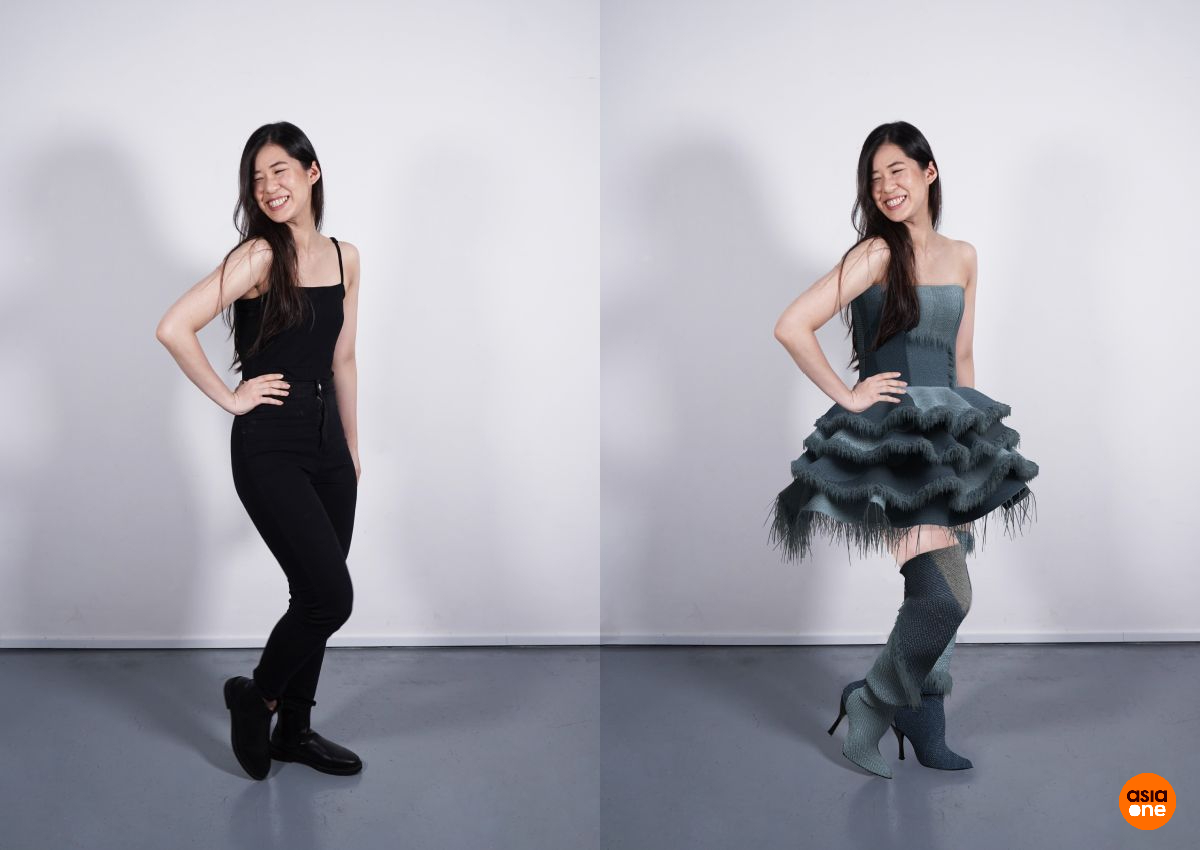 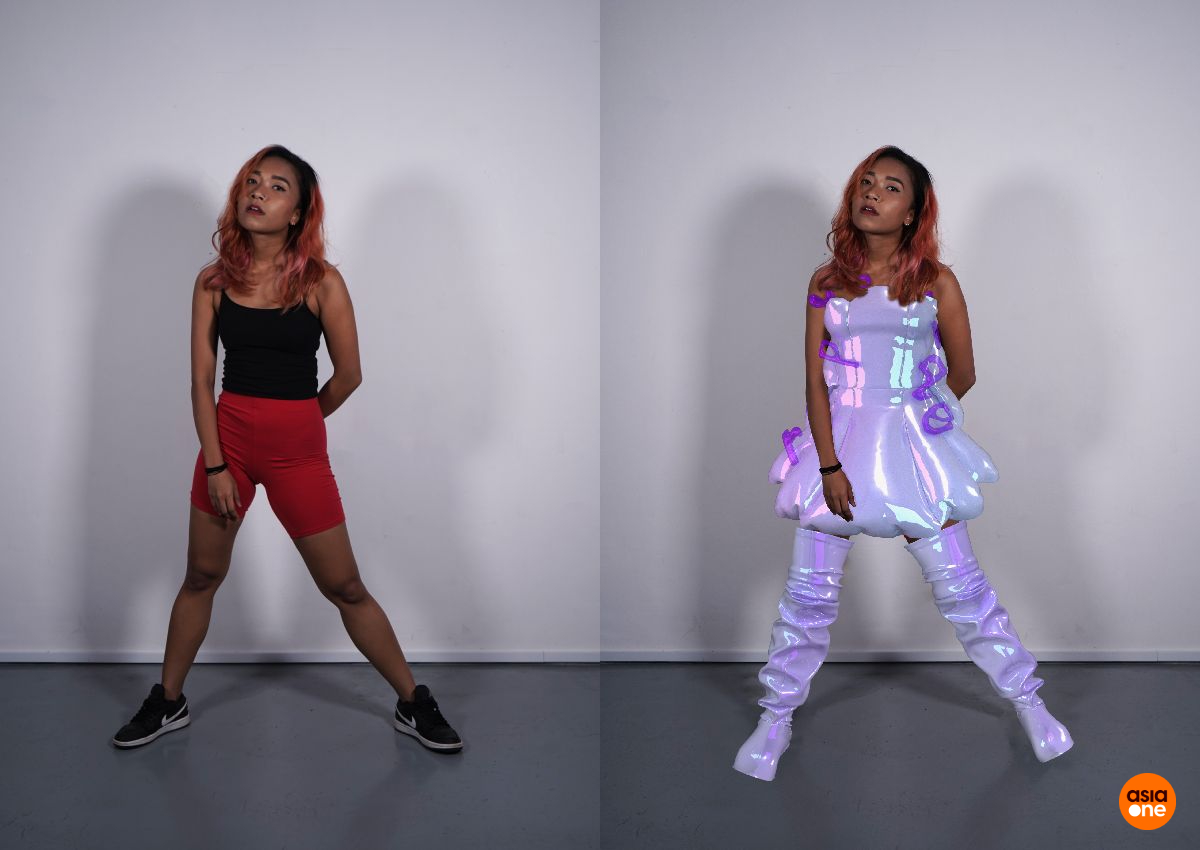 Our first impressions? Both Jannah and I instantly agreed that there were "strong getai vibes". We both looked like we could be a duo performing at the vibrant live events that pop up around Singapore during festive periods.

The flouncy dresses were delightfully camp and enough of a showstopper that they wouldn't be out of place on a stage.

We both usually go for a more casual style — think crop tops and jeans — but the beauty of digital fashion is that we're allowed to experiment with our style, with zero wastage.

And where else would you be able to find a statement-making outfit for just £10?

The next step was to share our spanking new fits on our socials. After all, if we didn't Instagram it, did it really happen?

Surprisingly, most of our followers didn't seem to realise that the garments were edited on.

I got some sweet online validation in the form of multiple fire emojis from my friends, and Jannah was showered with compliments ranging from "absolute queen" to "hawt stuff". 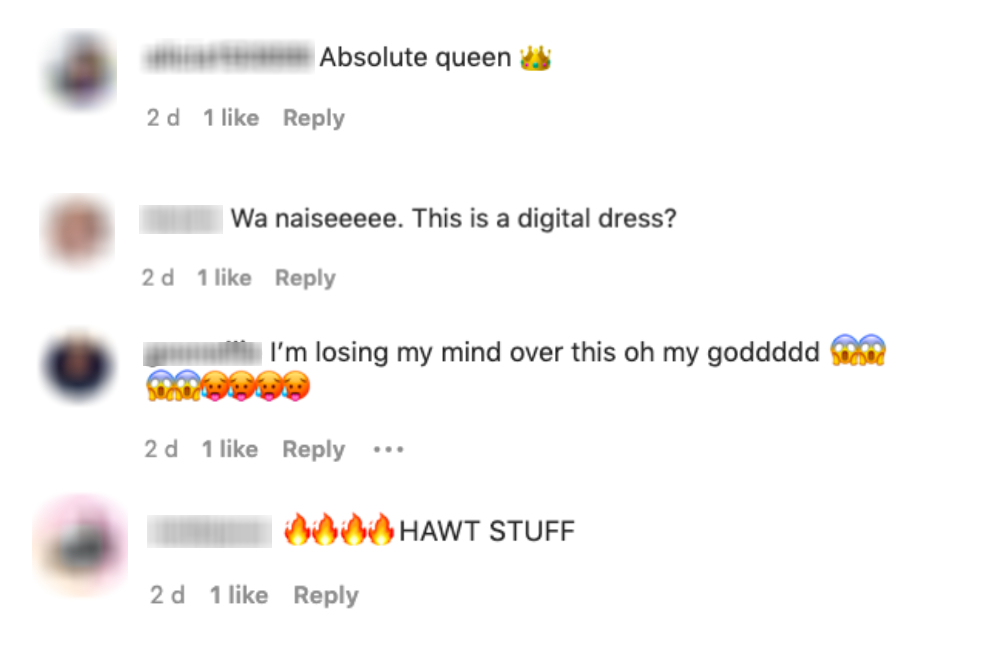 While I don't think digital fashion is going to be a regular part of both of our lives, it was definitely a fun and thought-provoking experience.

After all, this was the fashion item that sparked the most reactions from my friends and family this year, and it technically doesn't exist. Likewise, Jannah's futuristic fit also had her niece intrigued and declaring that she "wants to wear like this".

It's undoubtedly a game-changer for fashionistas and influencers whose bread and butter are photoshoots and social media content.

And even if you're not in the business of fashion, or influencing, it might still be a cool experience to try out once in a while. After all, life is too short to stick to a capsule wardrobe.

Why not get fancy and 'wear' a gown made of bubbles? Or dress your dog in a fluorescent puffer?

Don't like the result? At least you can simply delete the pictures instead of having to declutter your wardrobe.