The best kinds of hotels , in our books, are the ones that cocoon you in a different world. And when it comes to out-of-this-world experiences, Duxton Reserve is a shining example. Housed in eight restored 19th-century shophouses along Duxton Road , this boutique hotel by The Garcha Group drips with oriental glamour – the kind that has us leaving our modern-day worries at the door and stepping into what feels like a period film set. 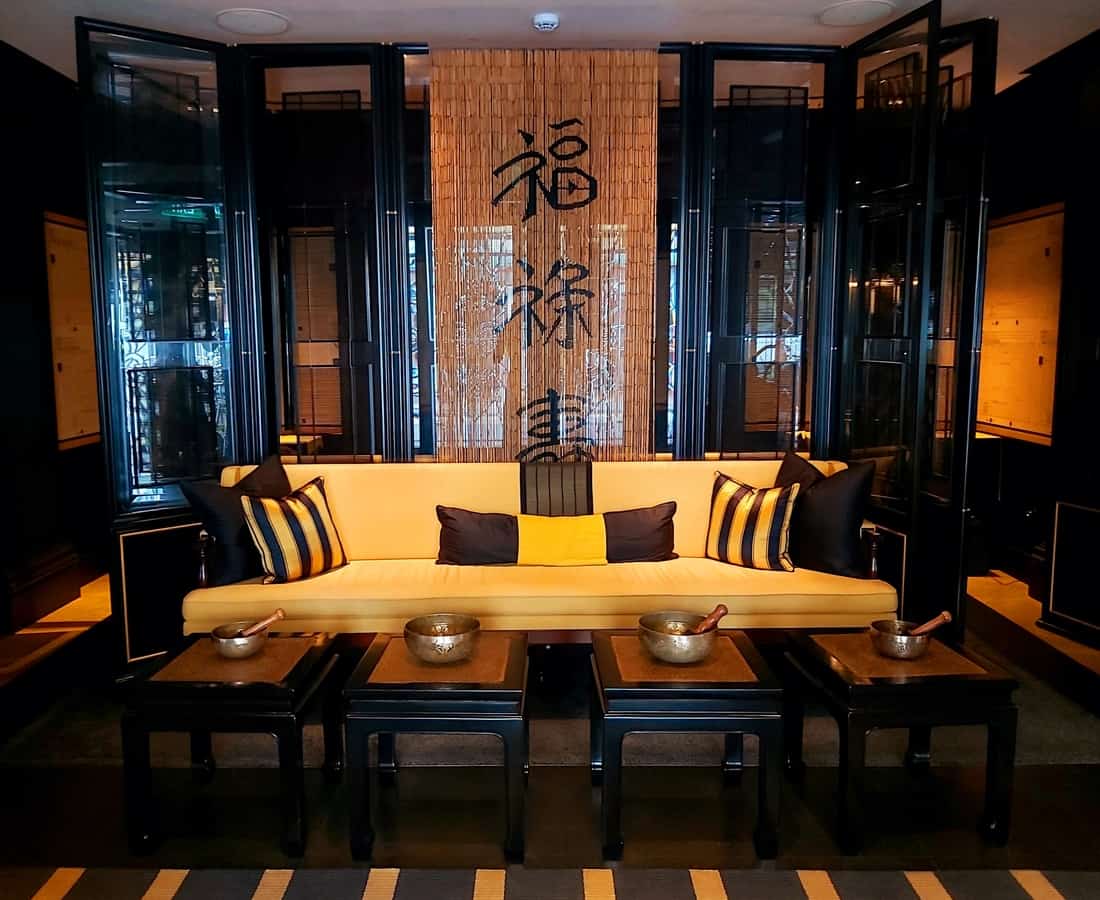 Formerly known as Six Senses Duxton, Duxton Reserve was relaunched in early 2021 under Marriott International’s Autograph Collection portfolio. Much of the sensuous aesthetic crafted by Bond girl-turned-acclaimed interior designer Anouska Hempel has been retained – an opulent palette of black and gold, woven with eclectic oriental details.

The first thing that greets our eyes as we step in is a quartet of Tibetan singing bowls, arrayed on black lacquered stools – a far cry from the typical bland hotel waiting area. Just as striking is the beaded bamboo curtain that drapes above a yellow-and-black chaise, bearing the calligraphy ‘Fu Lu Shou’ – a nod to the traditional deities of fortune, prosperity, and longevity. 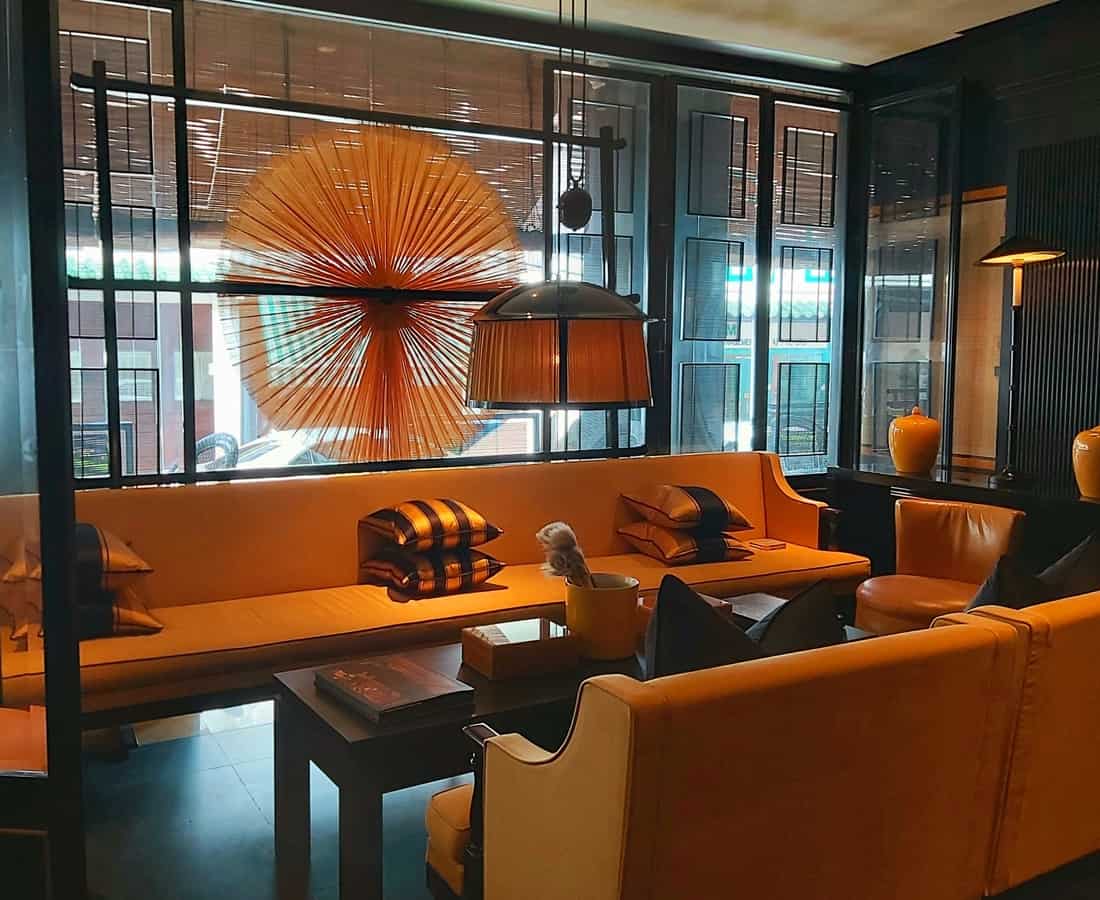 Unlike the cavernous space of most hotel lobbies, the ground floor is laid out in a long passage of chambers unfolding into chambers that feels at once intimate and cinematic.

We wend our way through jet-black folding doors and colossal golden rosette fans, pausing to admire gauzy lampshades and giant brushes arranged in bright yellow vases. When we reach the reception area, another surprise awaits: a little alcove that serves as the hotel’s TCM room, dominated by a mural of a prowling tiger. 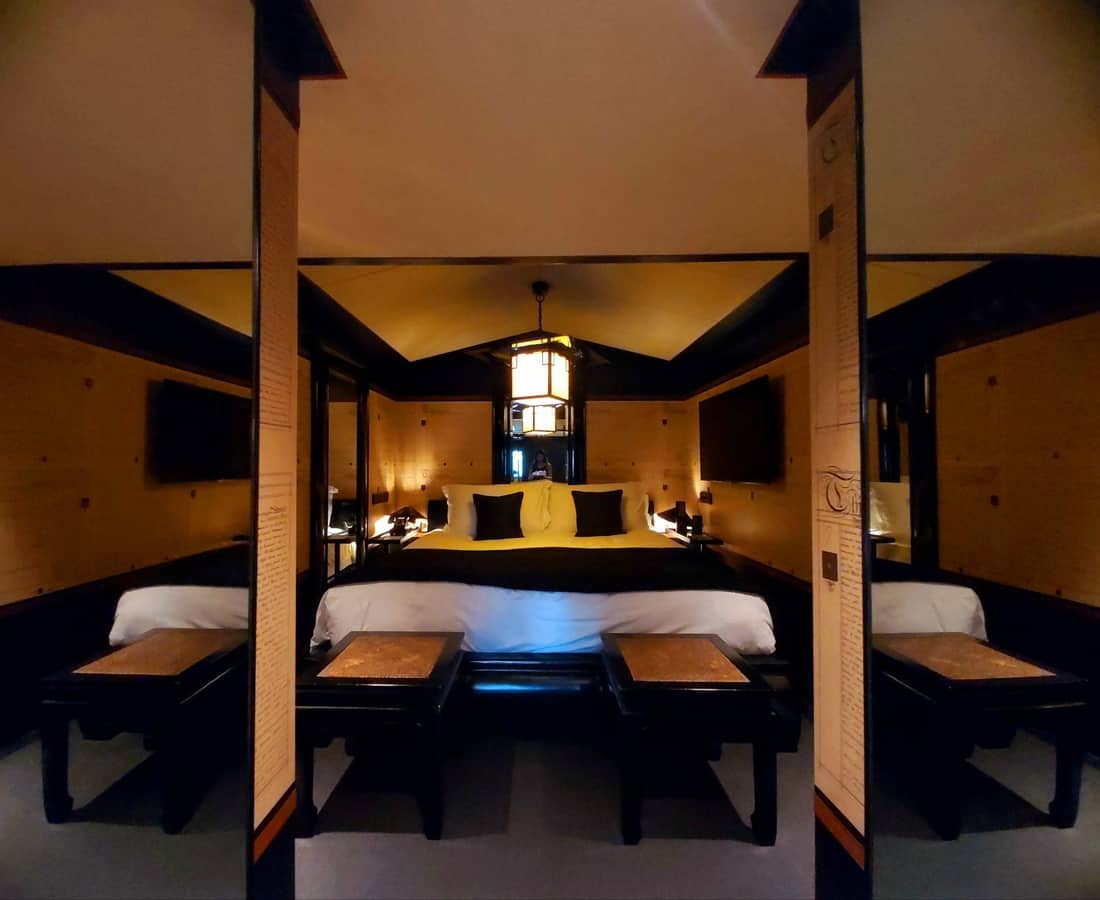 Spread across three floors, the hotel’s 49 spacious rooms come decked out in heritage-inspired themes from ‘Shophouse’ to ‘Opium’. The latter, of course, is a nod to Duxton’s seedy history of vice in the 19th century, not least of which were opium dens. Our Opium Suite (from $399++ per night) is 32 square metres of jet-black glamour – a dramatic den with a spacious living area adjoining what might be best described as a bedchamber.

Step through the mirrored archway of the bedchamber and you’ll find a scene straight out of a Chinese period drama. There’s a king bed kitted out in organic cotton linen and overhung by a Chinese-style lantern, with mirrors on two sides for theatrical effect.

The ceiling is low and curved, enhancing the sensuous air of the chamber – though if you aren’t careful, you’re likely to bump your head into the lantern. A faux rotary phone adds to the nostalgic charm, though we also appreciate the sign of modernity – a satellite TV – set along one wall. 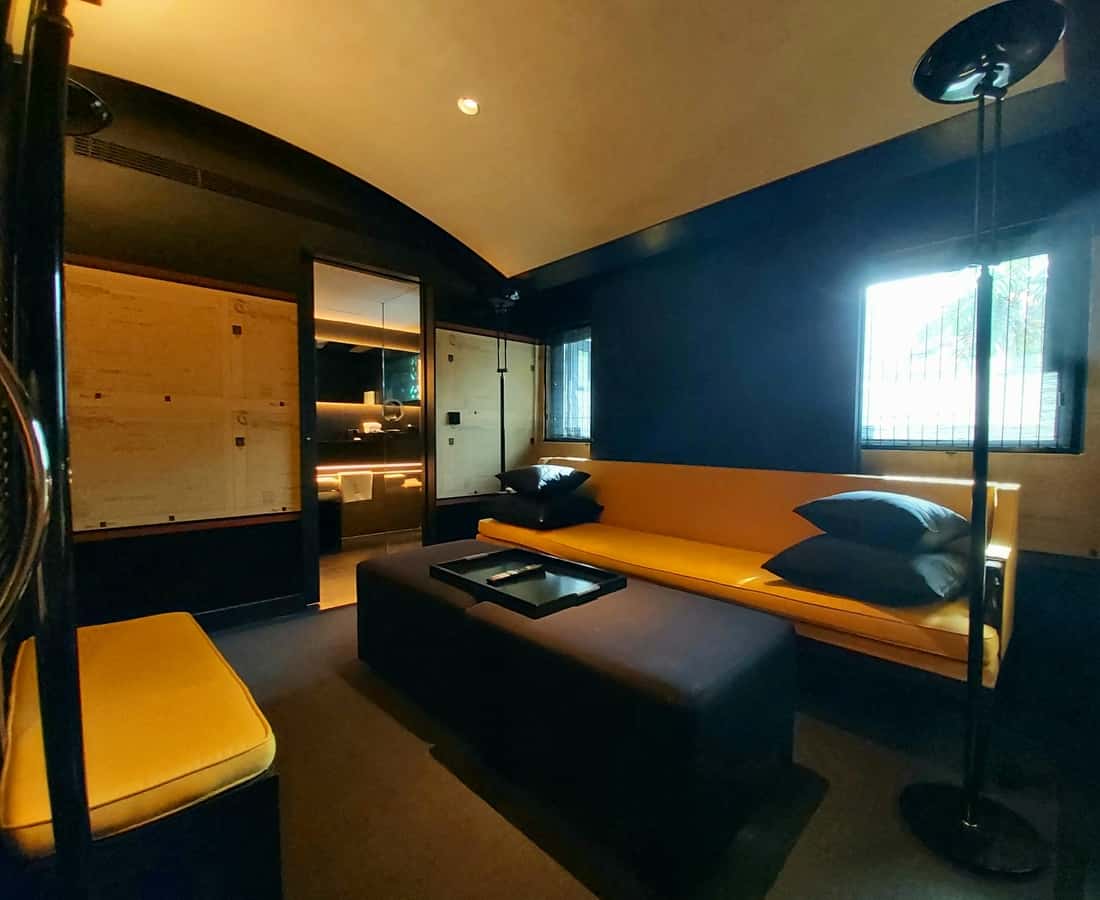 The black-and-yellow palette carries on into the living area. Dim lighting and walls papered in yellowed indenture documents make for an atmospheric space, complemented by dark-framed furnishings.

Meanwhile, the bathroom boasts amenities from Philosykos by Diptyque and fluffy organic cotton towels by The Madison Collection – everything you need for a comfy experience. And if you need anything else, the service team is impressively prompt – when we dialed reception for a missing toothbrush kit past midnight, it was brought to us in five minutes flat. 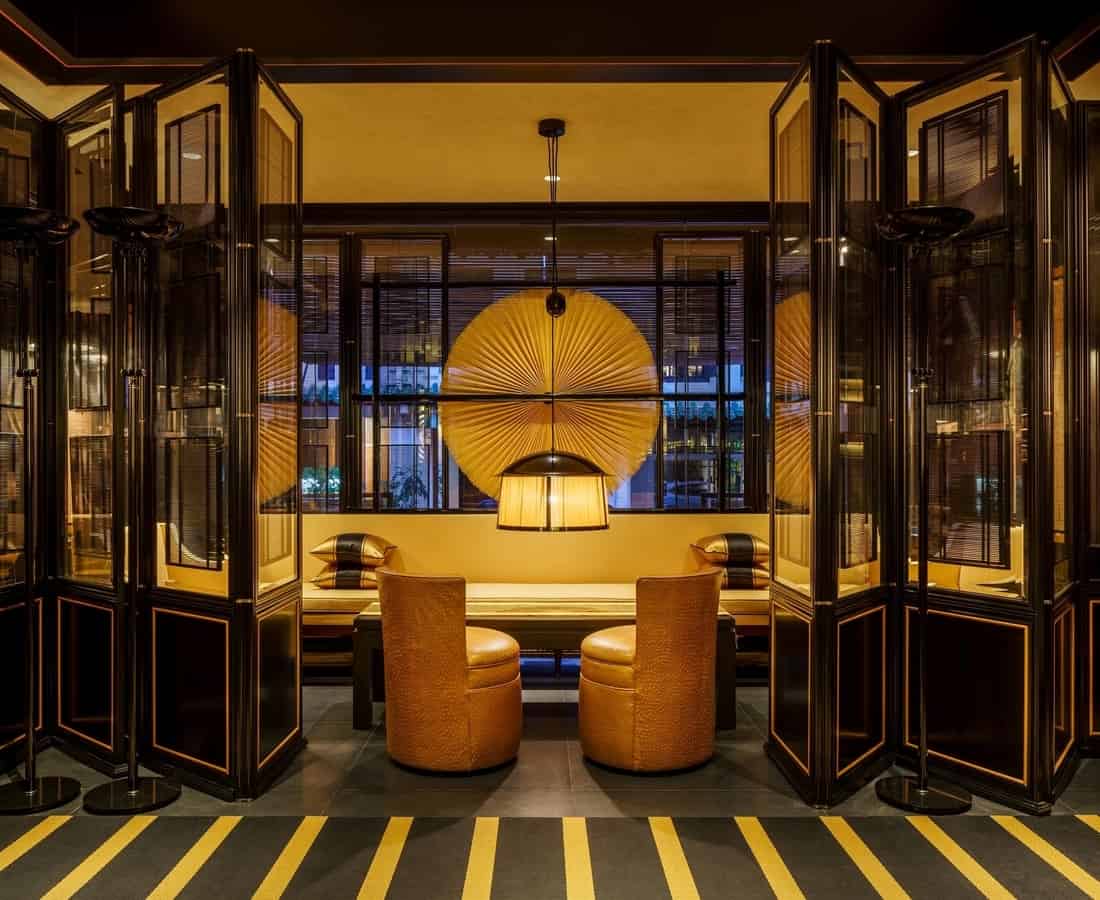 Given the oriental décor, it’s no surprise the hotel’s in-house restaurant is a modern Chinese one. Set on the ground floor, Yellow Pot lives up to its name with walls adorned with lacquered yellow pots and black tiffin carriers. Clean eating is the driving philosophy here, which means Chinese dishes minus the MSG and additives. 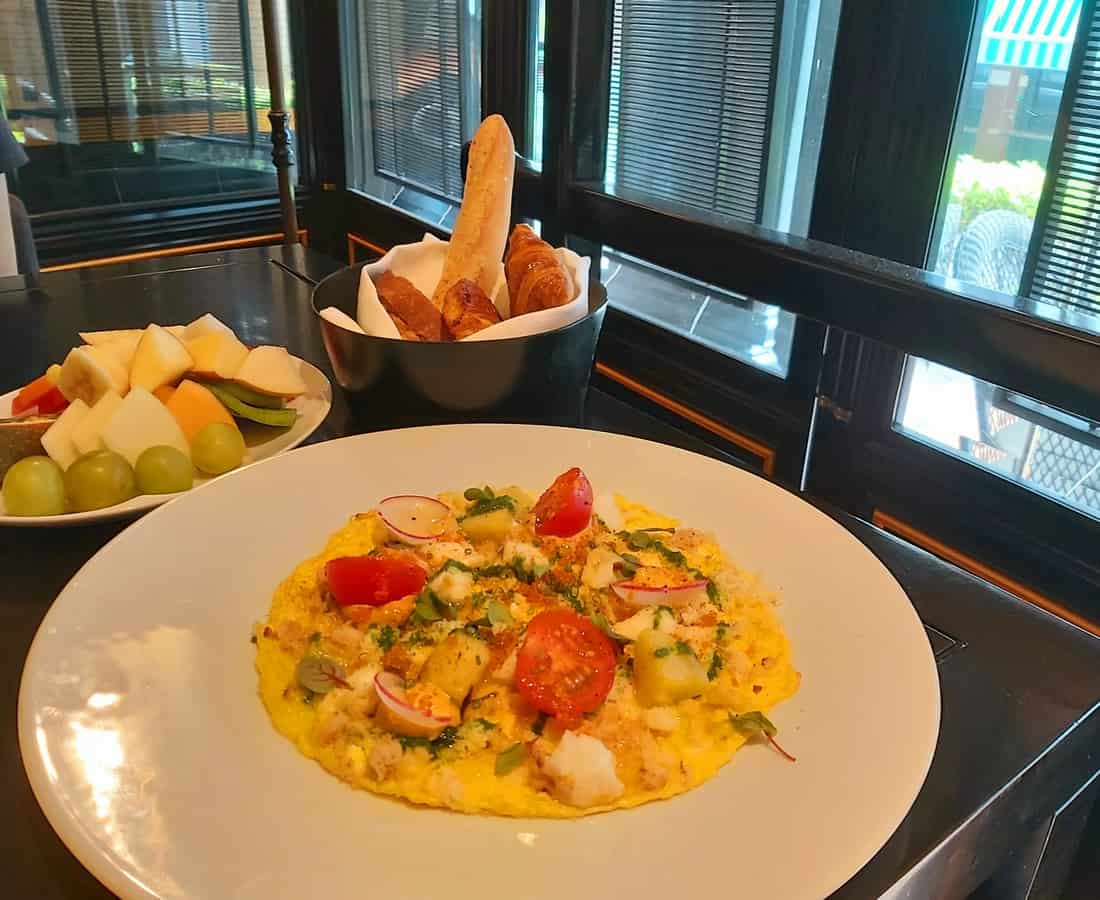 We highly recommend dragging yourself out of bed for the stellar breakfast spread. Guests with breakfast included in their booking can pick a main from the east-meets-west selection – our Soft Scrambled Eggs, for one, was reminiscent of the zi char classic of trio egg spinach, with creamy eggs stirred with grilled courgette and spinach.

Another intriguing main, Lobster & Crab Omelette , turned out to be a spicy take on egg foo young, swapping out the usual shrimp for generous chunks of Rougié Blue Lobster and king crab. That’s on top of a Bakery Basket of croissants, not to mention one of the most extensive fruit platters we’ve seen yet – think a dozen tropical fruits including Chinese pear, passionfruit, and starfruit.