Apart from their taste and variety, what also appeals to Indians about parathas is that they conjure up nostalgic memories of home-cooked family meals, says a chef.
PHOTO: A Handout photo.
PUBLISHED ONDecember 23, 2021 3:23 AMByNeeta Lal

When Indian food blogger Amar Sirohi posted a video of a momo-paratha on his YouTube channel Foodie Incarnate last week, it garnered over 200,000 views within minutes.

But viewers were polarised over the unusual pairing of the popular shallow-fried Indian flatbread with stuffing traditionally used for Nepalese momos — cabbage, carrot and onions — and served with a spicy chilli sauce.

Chowdhury layered his parathas with tomato sauce, Mozzarella cheese, turkey pepperoni and Thai chilli peppers, leading some netizens to call his dish a 'travesty' even as others felt it paid homage to both pizzas and parathas.

The reaction to new takes on a beloved food, especially during the current winter months, has cast the spotlight on the varieties of the flatbread that are available across India.

"A paratha is broken up as parat plus atta. Parat means layered and atta is flour or dough. Meaning layers of dough," explains Asha Devi, 58, who has been selling parathas from a roadside cart in Noida, Uttar Pradesh, for 20 years, and offers six varieties of the dish. 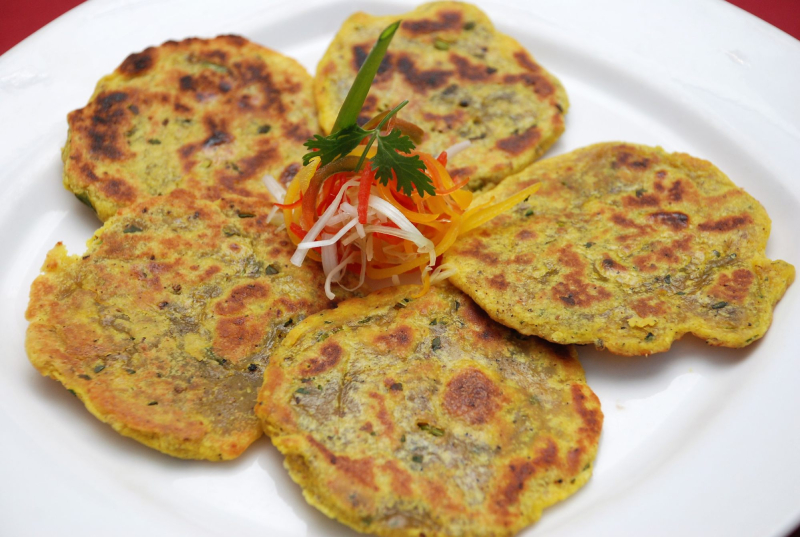 While roti is an Indian unleavened flatbread cooked on gas or tandoor without ghee or butter, naan usually has a stuffing of minced meat or vegetables like potato and is baked in the tandoor.

Parathas (stuffed, layered or plain) can be shallow fried on griddles with ghee or oil, or baked in the clay tandoor.

Many Indian states even have their own signature parathas. While West Bengal is famous for its Mughlai paranthas (an alternative spelling) stuffed with eggs, minced meat and veggies, Kerala's exquisitely layered parottas crafted from refined flour have many salivating.

Uttar Pradesh and Bihar's sattu (sorghum or barley flour) parathas are a current favourite among fitness conscious millennials for their use of superfood grains.

A whole street in India's capital New Delhi has been named after the flatbread. Called Parathe Wali Gali, the labyrinthine street is home to multi-generational vendors dishing out piping hot parathas fried on gigantic griddles with pure ghee (clarified butter).

Their clientele includes everyone from political leaders to Bollywood celebrities who have to wait in winding queues to dig into the gastronomic treat served with a spicy, asafoetida -infused potato curry, pickles and curds.

Kake Di Hatti, one of India's most popular destinations for parathas, has been selling 45 varieties of the dish in the capital since 1942.

Apart from regular layered parathas called laccha, the eatery also offers naan parathas made in a 35-inch tandoor which makes them smokier and healthier, claims its owner Gurdeep Singh. 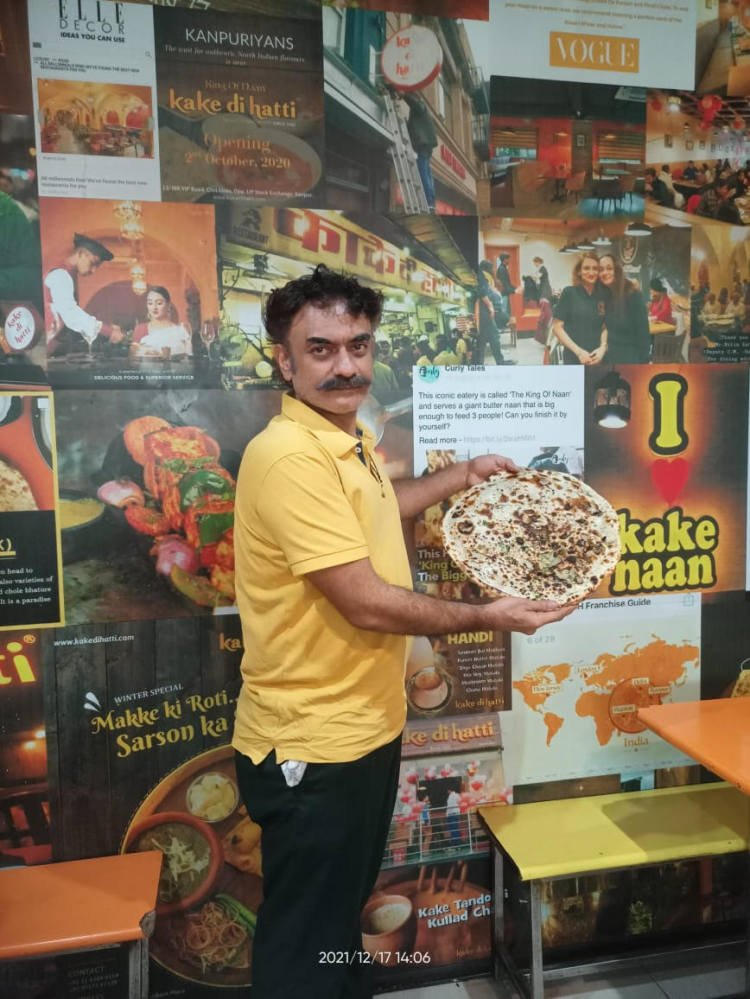 There is also the Dhuandhar (smoking hot) paratha, which is so spicy that it is sold with a warning — to be eaten only with curd, a fermented dairy product. A 26-inch Hariyali paratha incorporates 21 types of herbs and condiments.

The eatery, now run by fourth generation owners, still follows its original recipes from 1942. "All our recipes and spice mixes are a secret. Even our cooks do not know what goes into them," said Singh, 56.

The key to a good paratha lies in the balance of ingredients, he said. "The flour, the fillings, herbs and cooking method must come together harmoniously. Even if one of these elements is out of whack, the result won't be desirable."

Apart from their taste and variety, what also appeals to Indians about parathas is the nostalgic value, said Swapnadeep Mukherjee, executive chef at the Metropolitan Hotel & Spa, New Delhi.

"No quintessential Indian meal is considered complete without a paratha. From childhood — when grandmas lovingly serve steaming hot parathas with a dollop of home-made white butter placed in the centre of the dish — to adulthood when moms and spouses cook it for their loved ones, the dish remains close to an Indian's heart," he explained. 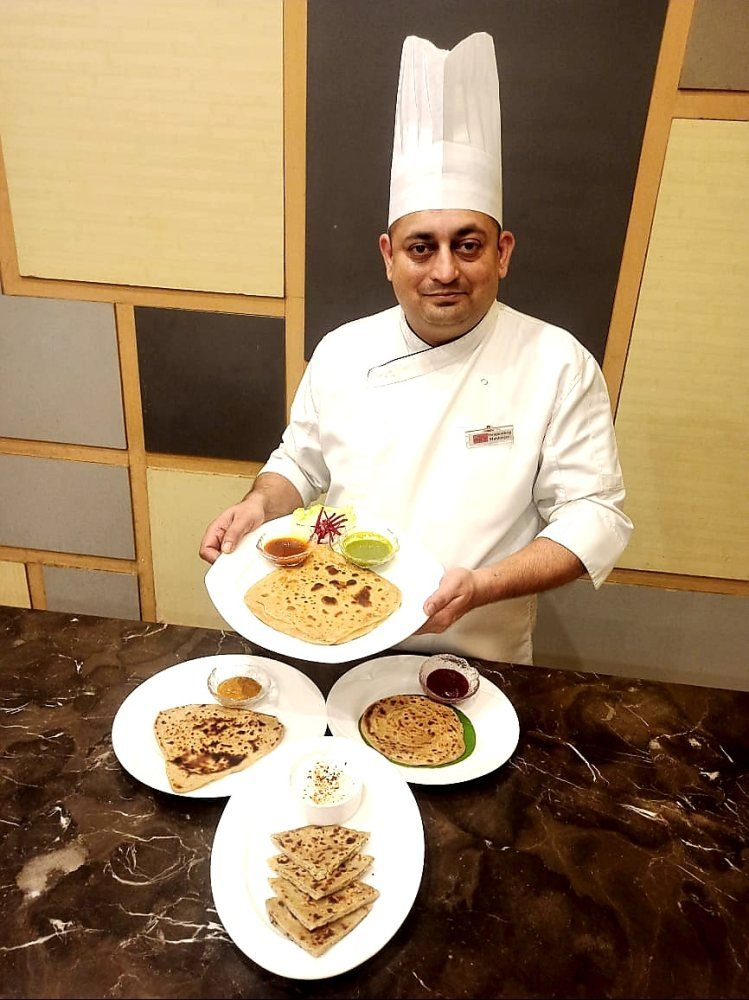 At the hotel, Mukherjee serves a dozen types of parathas with different fillings and varying in shapes — from square and round to triangle.

Chutney, the hotel's signature Indian restaurant, offers parathas with over 20 types of chutneys including mint-coriander, dates, beetroot, onion-chilli and tomato.

For the health-conscious diners, parathas are customised with gluten-free flours like millet and wholewheat and tandoor baked rather than shallow fried and mildly spiced.

"What we also keep in mind," added Mukherjee, "is the time when the dish is served. For breakfast, we usually keep them light and thin with less ghee because people have to go out for work after the meal. For lunch and dinner, the fillings and spicing turn heavier."

Also driving the popularity of parathas is the constant innovation by modern Indian chefs, such as Calzone paratha shaped like the Italian folded pizza, margarita parathas, and in a nod to India's neighbour China — noodle parathas, which are increasingly popular among foodies.

Some cooks are also offering roti canai or roti prata, a crispy, buttery and flaky flatbread that originated from south India and travelled to Malaysia and Singapore with the Indian migrants from Chennai, Tamil Nadu.

Made famous by mamak (Indian-Muslim) hawkers in Malaysia and street stalls across Singapore, roti canai may be served with daal, fish or mutton curry, or plain sugar. Its dough is stretched and flavoured with ghee to give the dish complexity and taste, added Mukherjee.

indian foodFood and DrinksChefsLifestyle
Share this article
This website is best viewed using the latest versions of web browsers.