It's normal for children to be curious about the birds and the bees, but how does one navigate such a sensitive topic?

Jacelyn Tay, 46, is one mother who found herself in such a predicament when her 10-year-old son, Zavier, brought up a sex-related question one night.

In an Instagram post yesterday (Jan 3), the former Mediacorp actress detailed the exchange and revealed her thoughts on broaching the topic with her son.

Jacelyn shared that this isn't the first time that they've discussed the sensitive topic either, revealing that she has "given him sex education before and taught him to stay pure".

Zavier had started off the conversation by asking his mother, "Does it really feel good when [the] penis goes into [the] vagina?"

Remaining honest yet firm, Jacelyn candidly told him that the act of penetration does indeed feel good. But she went on to explain that one should only enjoy the act of sex with the person they're married to.

"If you feel good with anyone for sexual pleasure, then there is something wrong with you," she elaborated, likening it to the high one gets from drugs or junk food.

She also went on to warn Zavier about the dangers of casual sex and said not only would it increase one's chances of contracting sexually transmitted diseases, but it would also "contaminate" the soul and spirit.

As the saying goes, prevention is better than cure. Jacelyn shared that she also encouraged Zavier to steer clear of activities that may lead to sex, including "kissing and touching" the opposite sex before marriage and "dirty talks" about women's bodies.

In response to that, Zavier asked his mother for advice on what to do if he finds himself in a situation where he feels like having sex.

While Jacelyn told him to "just control" the urge, she confessed that she, too, was not certain what the right answer was.

"Oh man, it is not easy parenting at all," she lamented.

"In this time and age, I find it challenging bringing up a wholesome good boy."

Her reflections appeared to strike a chord with actress Fann Wong, who commented, "Oh man! So tough!"

While some questioned her decision to share her conversation with her son publicly, Jacelyn explained that she saw it as an opportunity for her son to "be open and 'scientific'" about the topic. 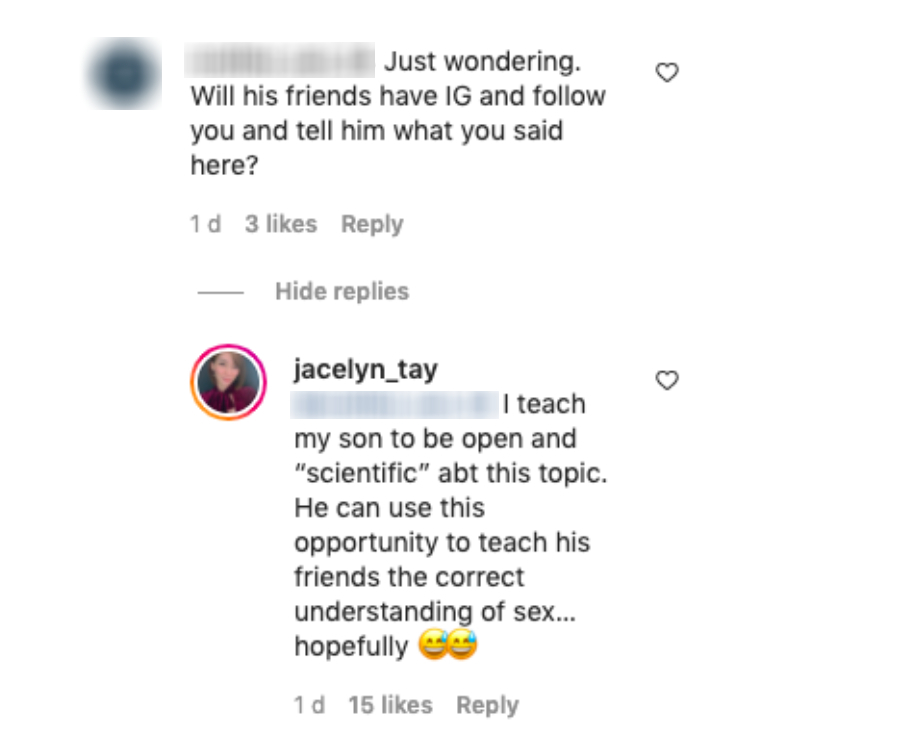 This isn't the first time that Jacelyn has had a thought-provoking conversation with her son. In November last year, Zavier had surprised her with his raw response on the topic of unconditional love, which left her feeling emotional.