Impossible Pork debuts in restaurants and here's what it tastes like Impossible Foods has swept the world with its remarkably beefy beef substitute, and now the plant-based giant is sinking its teeth into its next challenge: pork. Freshly launched in Singapore on 18 November 2021, Impossible Pork is rolling out across 36 restaurant brands and myriad cuisines islandwide – from Japanese to Italian, tze char to Thai. 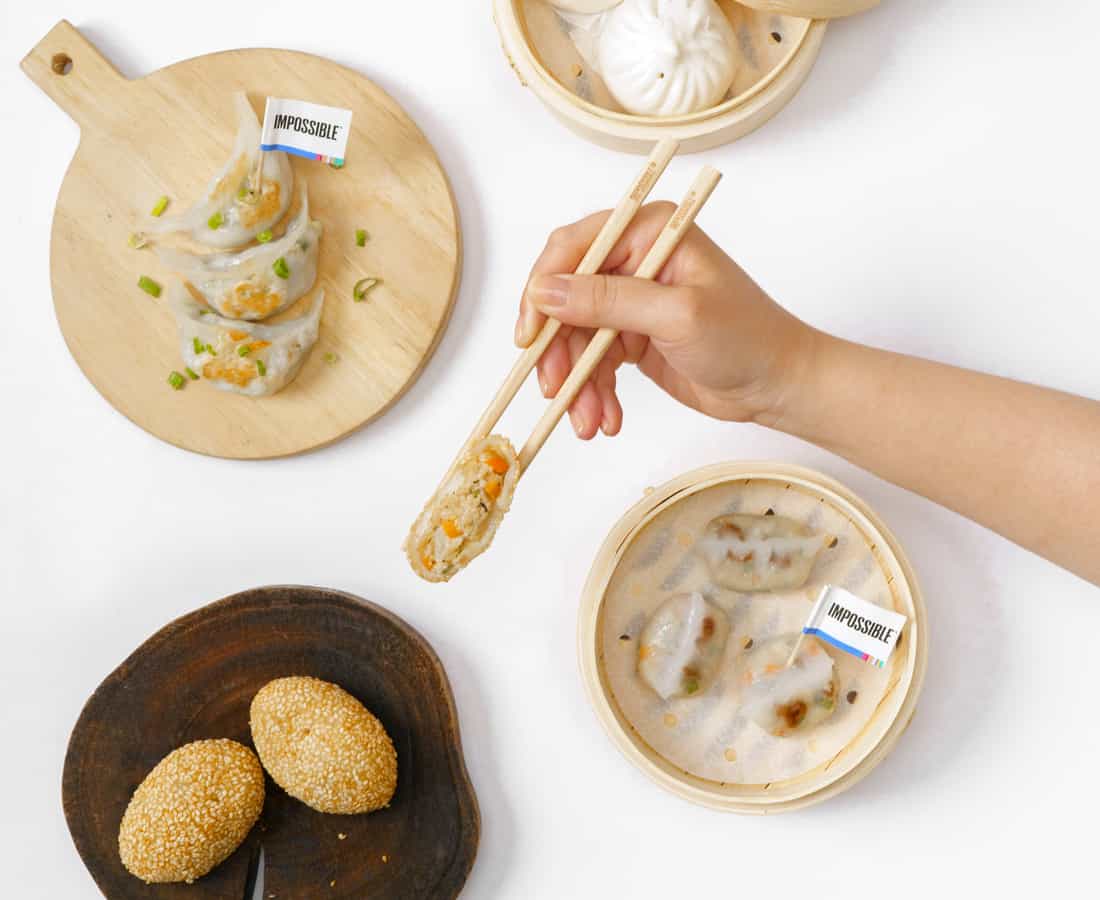 First things first: What’s it made of? The brand’s flagship product, Impossible Beef, is crafted from plant-based ingredients like soy protein concentrate, potato protein, sunflower oil, and coconut oil. In addition, there’s the star ingredient that has propelled it to fame over its competitors: heme, the iron-rich molecule that plays a big part in making meat taste like meat.

Impossible Pork is crafted from much the same ingredients as Impossible Beef – minus the potato protein. It’s worth noting that Impossible Pork can’t be considered Halal – it isn’t Halal-certified – though it contains zero animal products. Compared to conventional pork, Impossible Pork wins big on sustainability: it uses 81 per cent less water and generates 77 per cent less greenhouse gas emissions, according to an ISO-conforming Life Cycle Assessment. Oh, and it’s nitrate-free too. 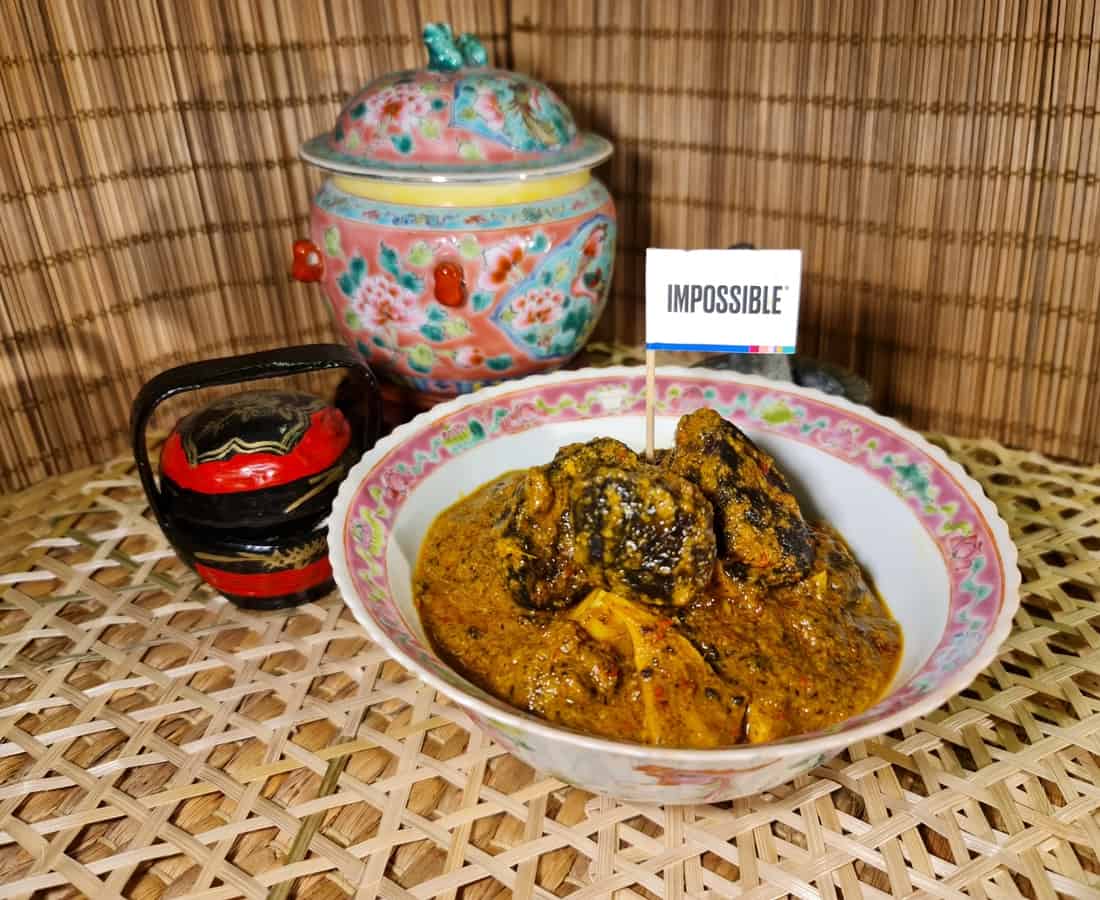 Pork is undoubtedly a cornerstone of Asian cuisines, and a handful of brands have already carved out a corner of the plant-based pork market here. Hong Kong-based startup OmniFood, for one, unveiled its OmniMeat Luncheon earlier this year, joining its flagship OmniPork product.

No surprise, then, that as compared to its beefy counterpart, Impossible Pork has succeeded in getting a wide slew of Asian restaurants in Singapore to join the plant-based party. This includes New Ubin Seafood’s Claypot Tofu with Impossible Pork ($18), USHIO’s Toban Impossible Okonomiyaki ($24), Straits Chinese Nonya Restaurant’s Impossible Buah Keluak ($20.80), and even Impossible Bak Kwa ($12) from Fragrance.

Steamed or sautéed, charbroiled or grilled – Impossible Pork is allegedly designed to do everything the real stuff does. And according to Impossible Foods, 54 per cent of surveyed consumers in Hong Kong preferred the taste of Impossible Pork over pork from pigs in blind taste tests – a pretty big claim. We got the chance to pig out on some Impossible Pork creations, and here’s our verdict on the good and the bad. 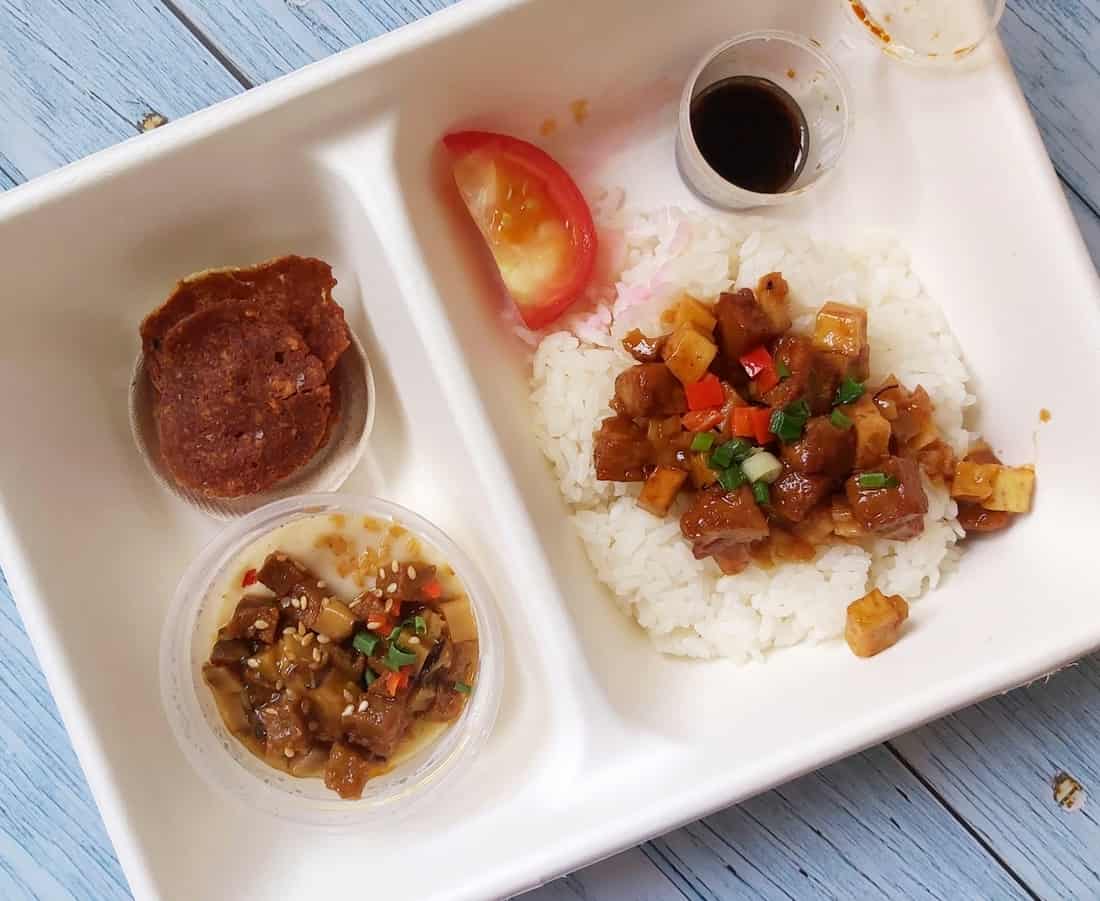 TungLok Group has put a plant-based twist on traditional Chinese dishes, and the results are surprisingly stellar. We like their Braised Beancurd with Minced Impossible Pork in Spicy Sauce ($13++) even better. The diced Impossible Pork tastes unmistakably pork-like, with a tender texture reminiscent of luncheon meat that matches the silky beancurd nicely.

Though we had our Claypot Rice with Minced Impossible Pork ($12.80) on white rice, the minced pork was similarly soft and tasty – we imagine it would be even better with a whiff of wok hei. The crisp-fried Impossible Cracker ($12), however, was too dry for our liking.

Da Paolo Gastronomia has whipped up a Mediterranean Impossible Pork Pie ($14.90) that’s great for a light lunch. Impossible Pork ragù, diced portobello mushrooms, potatoes, and tomato sauce make for a satisfyingly creamy mixture, encased in flaky shortcrust. We don’t taste much ‘pork’ per se, but the texture is pleasantly tender.

Replicating the fatty, crackly textures of pork belly is undeniably a tall order for plant-based pork. Empress’ Braised Dong Po Impossible Pork Belly ($9.80 per pax), unfortunately, falls far from the mark. On first glance, it looks oddly mushy – a far cry from the usual luscious slab. On the palate, it tastes and feels distinctly like tofu, with only a tantalizing hint of pork. It’s not unpleasant, but less satisfying for those craving something more pork-like.

Another dish that involves replicating the pig’s anatomy, pork ribs pose a challenge too. Texturally speaking, Privé’s skewered Impossible Pork BBQ Ribs ($15) resemble very large, chunky meatballs, without the fork-tender shredded texture we associate with BBQ ribs. We would have liked a bit more moistness to capture the fatty tenderness of ribs too. Taste-wise, it’s meaty if a tad mushroomy. 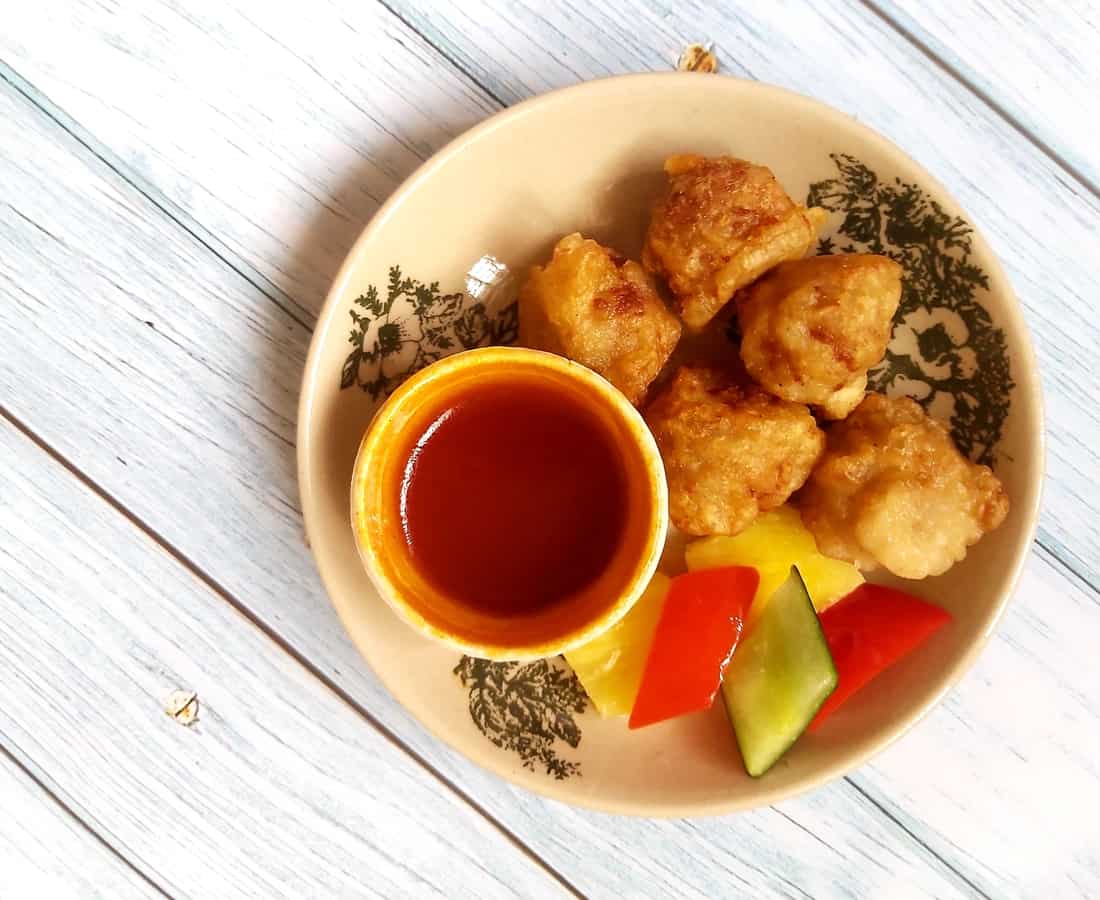 Sweet-and-sour pork is a staple on any Chinese table, and Madame Fan knocks the plant-based rendition right out of the park. This Cantonese fine-dining restaurant has created a Sweet & Sour Impossible Pork ($22) dish that’s delightfully bouncy and tasty. The even, springy texture is pleasantly reminiscent of nuggets – we’d polish a plate off easily. 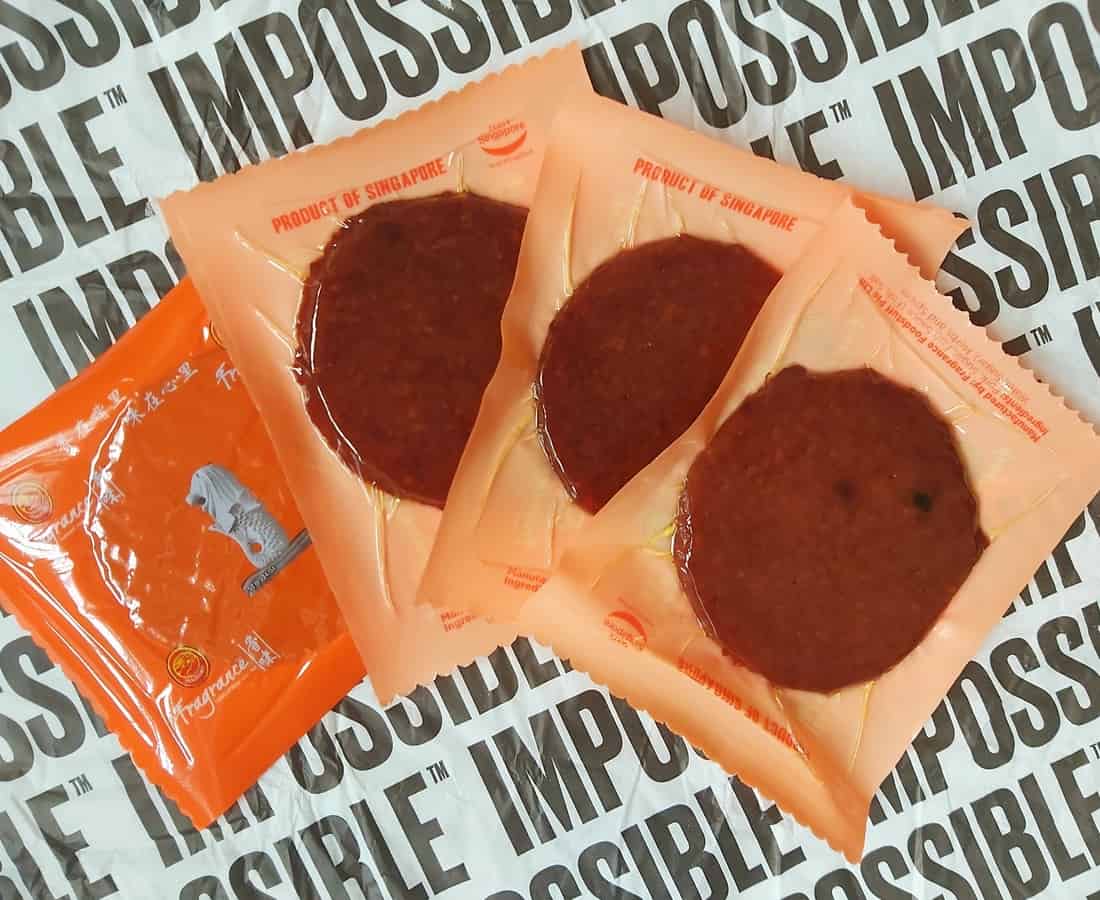 Fragrance is synonymous with bak kwa, and the brand is launching a first-of-its-kind Impossible Bak Kwa ($12 for a 150g packet) – the fruit of over two years of research and development. While this barbecued ‘pork’ is more pasty than chewy, it does capture something of the moistness and smoky sweetness of bak kwa.