'I stopped seeing myself as a victim': How counselling helped woman with cancer Snehal Ponde was newly arrived in Singapore and had recently given birth to a son when she was diagnosed with stage 4 cancer.
Snehal Ponde
PUBLISHED ONDecember 14, 2021 6:53 AMByBhakti Mathur

A cancer diagnosis changes lives. Feelings of shock, fear and uncertainty can overwhelm not only the patient but their entire family. For Snehal Ponde, a breast cancer diagnosis in August 2020 brought despondency and anxiety - followed by clarity and focus, and a fierce determination to embark on a new career.

A human resource professional with 13 years of experience, Ponde started a new journey, training to become a life and career coach while undergoing chemotherapy and dealing with its debilitating side effects.

Born in Mumbai, India, she and her husband had moved to Singapore in December 2019 for him to take up a new job. "We had been married for two years and were excited about starting our life in a new country and becoming first-time parents," says 38-year-old Ponde, who was five months pregnant at the time.

In April 2020, the couple welcomed a healthy baby boy just as Covid-19 hit the city. While breastfeeding him, Ponde noticed that her left breast remained unusually engorged. 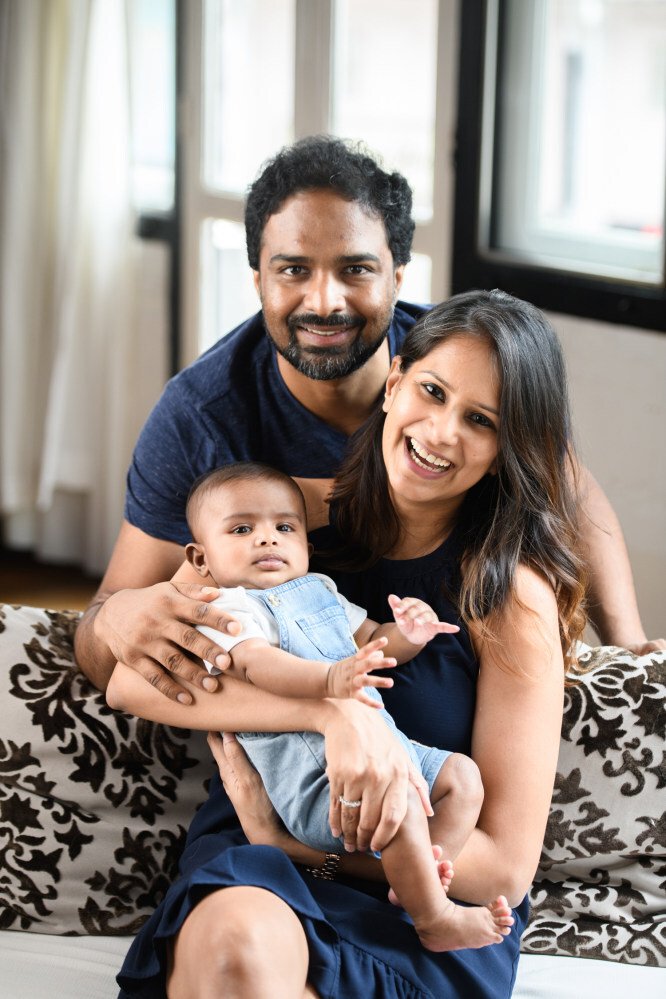 "I thought it was a mild infection that would go away and tried home remedies like massage and applying heat to the affected area," she says, but she postponed a doctor's visit because of the pandemic.

The problem persisted, and Ponde finally consulted a doctor. An ultrasound, biopsy and a PET scan revealed stage four metastatic breast cancer, which had spread to her lungs, liver and bones.

"Nothing can prepare you for the words 'you have cancer'," says Ponde. "As soon as the doctor uttered the words 'stage four' I thought 'I am going to die'. My whole life flashed in front of my eyes. I was shocked and petrified. We were in a new city where we did not know many people, and had no idea about the medical system."

Ponde's mother had died a few months before her son's birth, and her father was unable to visit because of travel restrictions.

"Friends and family told me to 'stay positive'. How do you do that when you are diagnosed with cancer? I was consumed with the fear of not being able to see my child grow up. I felt like a victim," she says. Her son was then five months old. 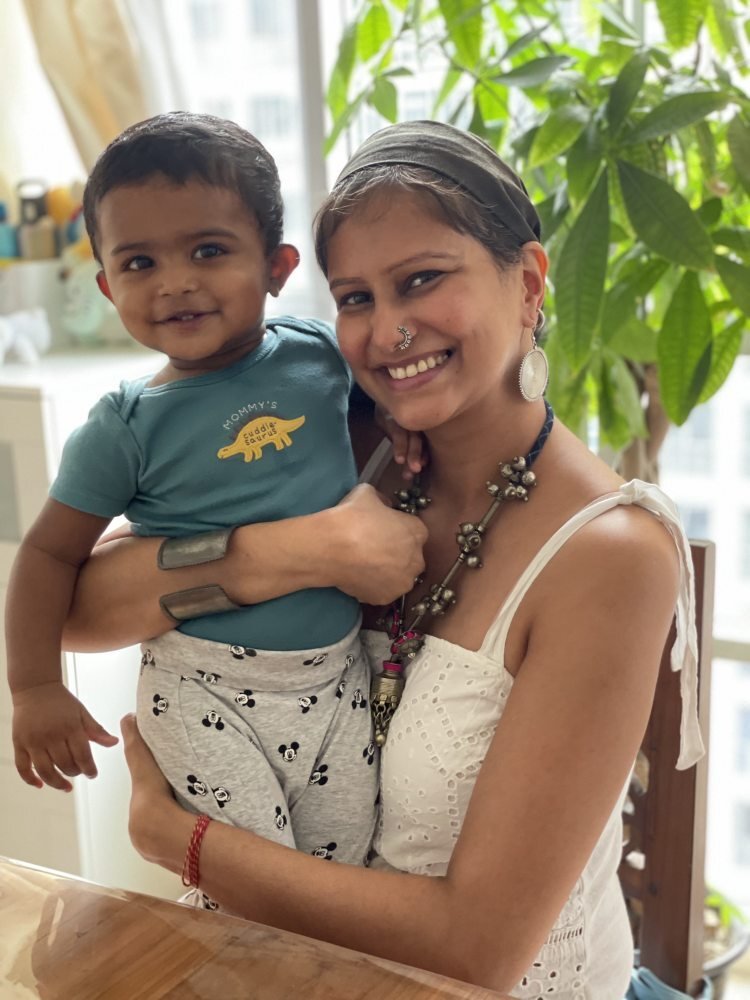 She began hormonal therapy, that adds, blocks or removes hormones to slow or stop the growth of cancer cells. "The treatment did not work. My cancer markers went up after six weeks and the doctors suggested we switch to chemotherapy."

Surgery was not recommended, as the cancer had spread. Ponde is now on her third chemotherapy cycle.

"Chemotherapy is hard on the body and the mind," she says, adding she has suffered side effects such as nausea, fatigue and hair loss.

"I lost the hair on my head, my eyebrows and my eyelashes. When I looked in the mirror, I did not recognise myself. I wondered what I would look like by the end of the treatment. I didn't want people to pity me or feel scared looking at me," says Ponde.

When a childhood friend, Suruchi Shah, a counsellor based in Bangalore, India, asked if she needed help, Ponde initially declined. When Shah persisted, Ponde reluctantly started online sessions with her.

"It is the best decision I made. I used to think that consulting a counsellor was a sign of weakness. I have come to realise that seeking assistance for one's mental health is a sign of strength," she says.

"Suruchi helped me face and process my fears, from feelings of self-pity to the fear of death. She helped me grieve and acknowledge my feelings. I was finally able to accept that I had cancer, which was a huge relief, as it enabled me to take charge of my life.

"I stopped seeing myself as a victim. Through the sessions I also realised that I was carrying a lot of emotional baggage from my previous marriage and divorce, and was able to address my unresolved feelings," explains Ponde.

"I learned to be kind to myself and to my body. It took a while, but cancer has helped me appreciate all that I have." She shares her thoughts on cancer, life, and her poetry on her blog, Blue Lotus (bluelotus.blog).

Last year, Ponde joined Iyengar yoga online classes three times weekly. "Practising yoga revitalises me. I can see the connection between the mind and the body. It has taught me to accept where I am in my practice and in my cancer journey," she says. She also enjoys cycling and long walks outdoors.

Ponde also reached out to Singapore's Breast Cancer Foundation for support - which she calls life-saving. "Speaking to women who have been in a similar situation and faced the same fears that I have is reassuring. I don't feel alone any more," she says. They provided nutrition tips, advice on managing chemotherapy and a wig-loan service.

Her family has been her greatest source of strength. Her husband made her realise that life must be lived to the fullest, no matter what the circumstances. "My mother-in-law has put her life and plans on hold for a situation she has no control over and moved in with us to take care of our family," says Ponde.

Ponde is a certified neurolinguistic programming practitioner who helps people become more self-aware of repetitive negative thoughts and trains them to reprocess them in a positive way. She is now working towards accreditation as an International Coaching Federation associate certified coach.

"Coaching excites me. It has given me a goal and a purpose. I love to help people get clarity about their lives," says Ponde, who coaches individuals on career changes, transitions or personal growth. "I coach during the weeks, when the side effects of chemotherapy have subsided. I never feel tired when I coach. It energises me."

She hopes to offer coaching services to cancer patients.

"I don't know when I'm going to be able to say that I'm in remission. I don't want to wait to live life. I want to seize the day and live my life today," says Ponde, who spends her days with her 18-month-old toddler, coaching, exercising, writing on her blog and meeting friends.

For anyone diagnosed with cancer, Ponde recommends prioritising your emotional well-being, finding your support system and talking to people you trust. 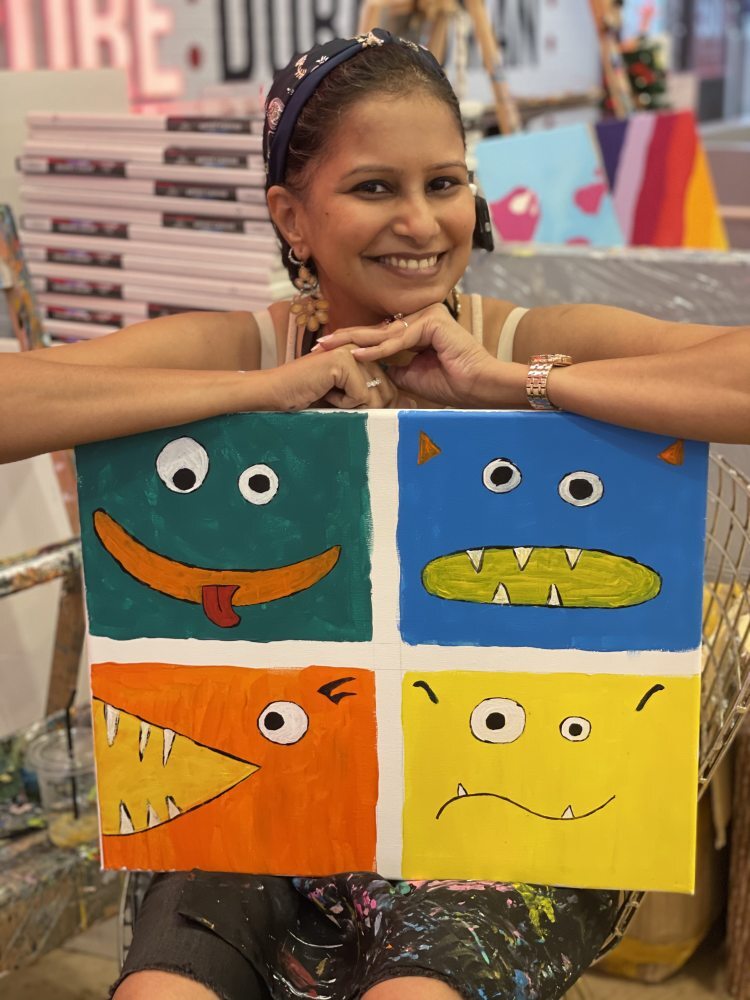 "The fear of the unknown is there, but it does not control me any more. I do have dark moments when I feel anxious about the future. Talking about my fears with loved ones has helped tremendously. The fear doesn't seem as big once you express yourself.

"My family reminds me of how far I have come in my journey, which gives me hope. I have learned to accept uncertainty as a part of my journey and focus on the present."