Heading into the lift at The Adelphi, there was a slight tinge of dread in me. I had signed up for a facial at skincare centre Face of Man on my own accord and was excited in the lead-up to my appointment.

Despite that, a tiny voice in me insisted that a man heading to a skincare treatment centre for a facial was just strange.

Before I could dwell on that thought, Chris Chua welcomed me into the establishment, which was founded in 1992. After some small talk, the 56-year-old entrepreneur encouraged me to enjoy my facial experience.

The store’s operations director, Jerome Chen, 45, suggested I give their microdermabrasion and skin infusion treatments a go.

Not knowing what to expect, I agreed while still trying to unravel the bunch of emotions within me at that time. The trepidation was rooted in how unfamiliar the experience felt.

My usual skincare routine is simple and straightforward — I have a cleanser at home that I use twice a day. I have no qualms with facial masks and will occasionally give them a go but moments like those are few and far between.

However, as soon as I settled down on the bed at Face of Man, I realised how silly I was to feel uncomfortable about walking through the front door of a skincare centre. 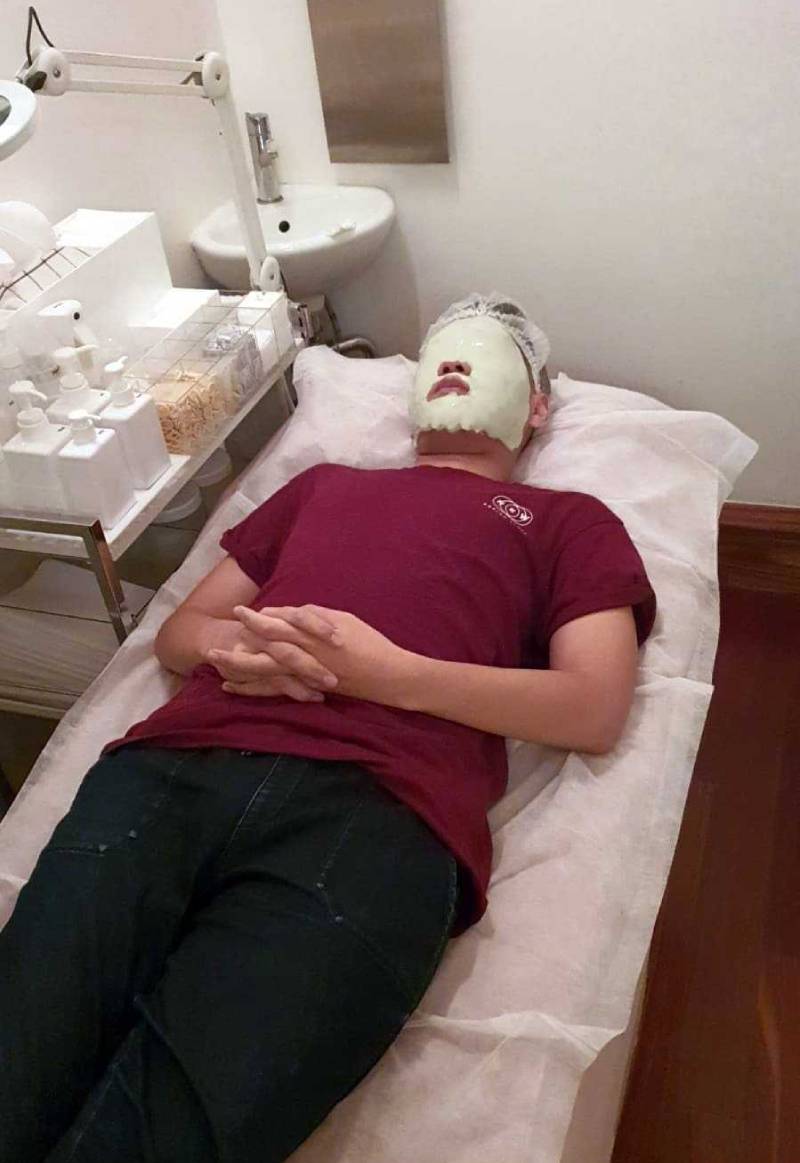 Despite the stiffness of my body in this photo, I can assure you my one hour at Face of Man was the most relaxing hour I've had for as long as I can remember.

Also, Jerome’s friendly demeanour helped calm my nerves as he ran through the benefits of each treatment for my skin.

“This treatment is actually excellent for exfoliating the dead skin cells and improving your post-acne scars,” the former fitness instructor explained.

This non-invasive skin resurfacing procedure lasted 10 to 20 minutes and I learnt it can also be used as a treatment for early stages of photoaging, skin roughness, discolouration, fine lines and enlarged pores.

So far, so good. Nothing was particularly painful — plus Jerome and I were getting along rather well.

We connected over our vested interest in — drumroll please — European football. Who says men can't be into sports and skincare?

Here’s where it got quite prickly, in the literal sense. Using a galvanic current, stem cells are infused into the skin to renew and tighten it.

This treatment is typically used to combat signs of ageing — rather demoralising to hear, given that I've yet to hit thirty, but I swallowed my pride and went on with it.

I was warned beforehand that this would be slightly more uncomfortable and it was. At times, the current felt like mini ant bites on my face. Thankfully, Jerome’s professional and meticulous nature ensured I emerged relatively unscathed. 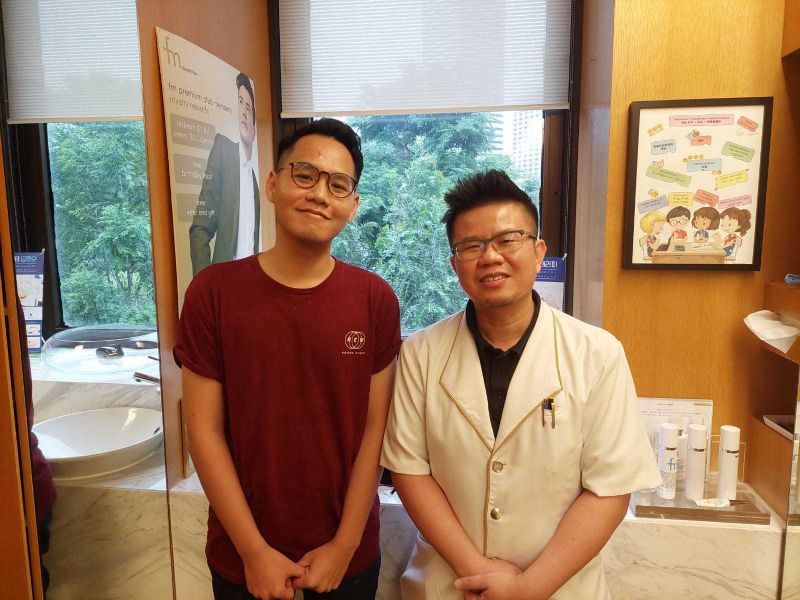 'Men have a need but are too shy to accept it'

After my facial, Chris and I sat down for a chat. From our earlier interaction, I could sense the passion he has for male skincare.

Throughout our interview, the glint in his eyes whenever a word such as "stigma" or "shy" came up was unmistakable. From Face of Man's early days, Chris understood that he had to destroy the notion that there was any wrong with men indulging in facial treatments for his business to succeed.

Barely five minutes into our conversation, he said to me: “Men have a need but are too shy to accept it.”

I was stumped by how it resonated with my initial uncomfortableness about getting a facial. While dolling oneself up once in a while is great, aesthetic clinics and extensive facial routines always felt like a step too far into the unknown.

“[Men] might think that beauty is for women and not men but they don’t realise it’s all about health. Also, looking good gives you confidence,” Chris said with a chuckle.

He went on and shared a story of how Face of Man advertised back in the 90s: “We’d distribute pamphlets at Safti (Singapore Armed Forces Training Institute) army camp outside, you know? We give them the pamphlets, they don’t want to collect but when I place the pamphlets on the chair and walk away, they go and take [sic].”

If I had a small bout of nerves heading into Face of Man in 2021, imagine the male skincare treatment landscape back then. No wonder those army men were terrified to be seen with a Face of Man pamphlet.

From aviation to skincare 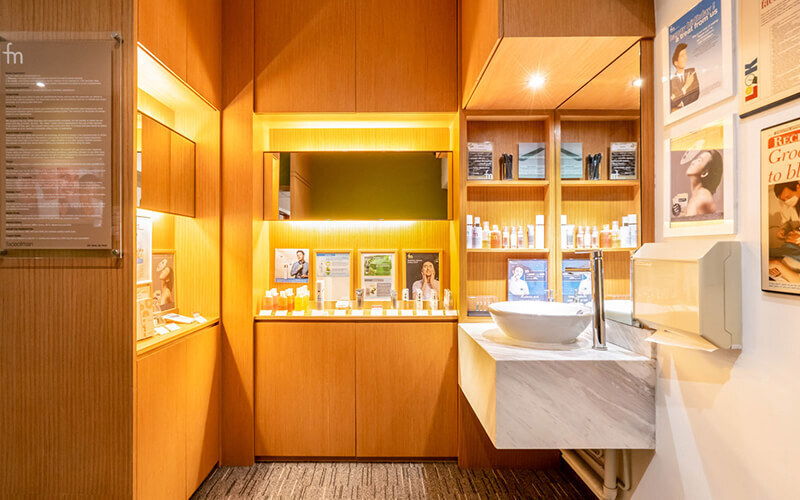 Before Face of Man, Chris was a cabin crew member at Singapore Airlines.

“At that time, I saw a need for men who actually want to treat their skin, especially scars and acne,” he said.

Chris mentioned that at the time, many men struggled to find skincare specialists. So, they would head to the doctor, who would usually prescribe them antibiotic cream. However, that would not always help resolve their skincare problems.

He saw a gap in the market and was confident in making that switch from cabin crew to skincare entrepreneur. Unfortunately, his first stumbling block came early in the form of access to knowledge. Chris was aware he needed to first find a place to learn the trade.

“I went around the whole of Singapore to find beauty salons and when I approached them they refused to accept me,” Chris recalled.

Most were confused as to why a man would want to be part of the beauty industry. The breakthrough came when a friend mentioned to him that there were aesthetics courses in London that fit his interests and needs.

“When I heard the word ‘London’, I made that trip."

Shifting mindsets over the decades 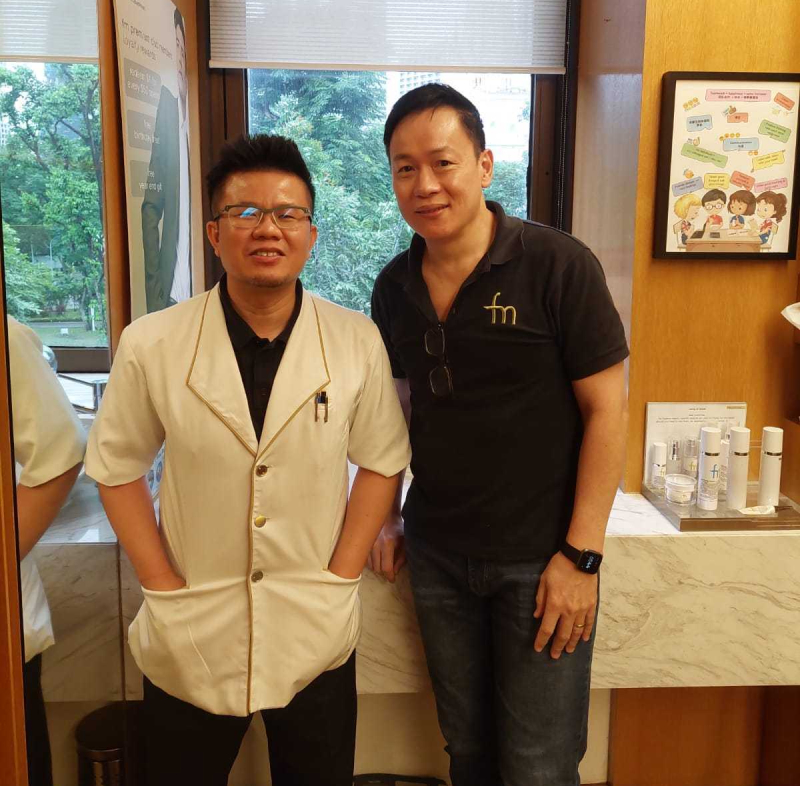 Those were the exact words Chris' dad uttered about plans to open Face of Man. Back in 1992, many might agree with Chris’ dad that Face of Man looked like an unwise business venture.

In those days, men – in their pursuit of masculinity – tended to veer away from activities that were seen as feminine.

After being in the game for almost three decades, Chris has seen a drastic shift in men’s mindset when it comes to taking care of their own skin.

In his eyes, men from the past associated masculinity with being a bit more dirty and unkempt. The typical macho man had to possess those traits and going for a facial would not comply with the persona many attempted to portray.

Nowadays though, Chris notices that more men are getting facials and quite a number of them don't seem worried about the supposed stigma attached to it.

It's hard to deny that Face of Man has played a role in shifting that mindset.

Towards the end of our talk, Chris concluded: "I think guys should take skincare seriously. Boost your confidence by taking care of the skin."

I can only speak on my Face of Man experience but after one appointment, I see why many men have chosen to not tie themselves to the traditional societal ideals of masculinity.

Face of Man has two other outlets at Ang Mo Kio and East Coast. For more information, visit their website.

ALSO READ: The best in men's skincare from Sephora

This article has been edited for clarity.