As a true fashion moment, Gwyneth Paltrow reprising a version of that red velvet Tom Ford-era Gucci suit at the recent Gucci Love Parade show in Los Angeles had the perfect measures of louche elegance, personal style, swagger and nostalgia required to stir up something of an internet frenzy.

Fashion loves a throwback, after all.

Paltrow worked with Gucci creative director Alessandro Michele on the suit (Michele did another red velvet iteration in the Gucci autumn 2021 collection too). It riffed on the one Paltrow wore to the 1996 MTV Video Music Awards, a look from Tom Ford’s autumn collection of that year and one many of us have thought about ever since.

But amid the internet’s rabid approval for Paltrow’s iconic look is this: velvet suits are truly having a moment. Indeed, these past few months, velvet, that most plush and tactile of fabrics – preferred by royalty, rock stars and foppish pipe-smoking gents – has been worn by all manner of celebrities. 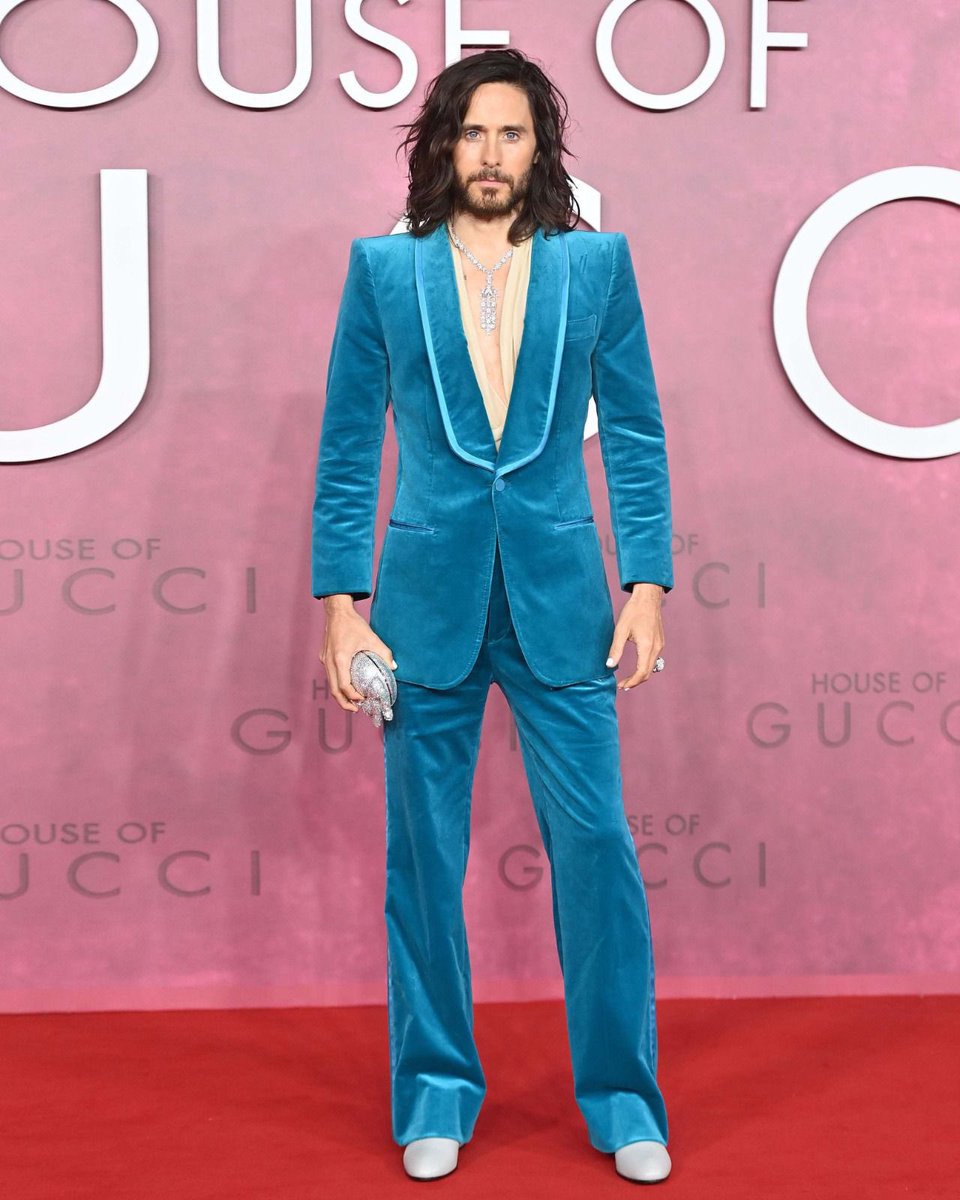 Among them is Jared Leto, another Gucci favourite. The actor, who stars in House of Gucci , has been spotted on the press trail in opulent blue and mustard velvet suits accessorised with some serious bling.

There’s been Taylor Swift, promoting her ultimate revenge album Red: Taylor’s Version in revenge plum double-breasted velvet from Italian house Etro. Halle Berry looked impossibly smoking while out and about in recent months in two lush floral velvet suits, one from US label Veronica Beard and another from Australia’s Alex Perry.

Sandra Bullock appeared on the Jimmy Kimmel Live! show last month to promote her new film The Unforgivable dressed in purple Temperley London wide-legged velvet trousers and a blazer. “I look like Prince. And I’m OK with that,” she told Kimmel. And really, so should we all be.

Other recent inductees to this super plush club include Daniel Craig, seen in a pink velvet tuxedo jacket from Anderson & Sheppard at the royal premiere of his final James Bond film; Britain’s Prince Williams looking rather suave in green velvet; and fashion set favourite Olivia Palermo in super lush forest green, paired with a lacy slip of a top and bold jewellery.

Regé-Jean Page as the dashing Simon, Duke of Hastings, in this year’s steamy period drama blockbuster Bridgerton did much for velvet too, with his fitted velvet blazers. And who can forget Jason Momoa at the 2019 Oscars in blush Fendi tux complete with matching scrunchie, or Harry Styles in blue velvet accompanying Stevie Nicks to the 2019 Rock & Roll Hall of Fame?

Velvet has popped up on catwalks everywhere, from Chanel’s autumn/winter 2021 collection to those by brands such as Khaite, Tory Burch and Vince. Giorgio Armani has long been a fan of the fabric, often using it in his elegant collections – though one suspects nobody is quite as much of a fan as was England’s King Henry VIII, who was said to have lined his toilet with velvet.

Erik Torstensson, co-founder and creative director of the fashion brand Frame , says a velvet suit is timeless. The brand, popular with it-girls such as Emily Ratajkowski, Hailey Bieber, Cara Delevingne and Gigi Hadid, released its first velvet suit in 2016 and for the winter season this year has dropped a capsule of plush velvet suits in jewel tones and slim, sophisticated cuts.

“The drop of our velvet suits this season has been hugely popular, as our customer wants to buy now and wear now; so it is the perfect timing with the transition to the winter wardrobe. The velvet suit is seasonless and can be worn every year, so it appeals to those looking to buy investment pieces,” says Torstensson.

As for how to style a velvet suit without feeling a little overstuffed, Austin Powers-ish or channelling too much Mick Jagger in the 1970s energy, Torstensson suggests keeping things streamlined and never too “done”.

“It can be styled in several playful ways, which takes you from day to night and exudes ultimate chicness,” he says.

“The full suit combination can be approached with a relaxed feel by pairing with trainers, or dress it up with boots for the evening, creating an impactful, streamlined silhouette. Styled separately, the velvet blazer is the perfect party piece when draped over your dress. Velvet is timeless and chic and should be part of any wardrobe staple.”

“Velvet is so versatile and you can use it to make as little or as much of an impact as you like. It can be dressed up or down depending on the style that you wish to go for,” she says. “Whether it’s a velvet pantsuit or skirt pared back with a casual tee and chunky boots, or a sumptuous velvet shirt styled under suiting, the possibilities are endless.

“My advice is to avoid too much heavy velvet in one look, as it can look a little unintentionally Victorian, and if you’re opting to wear velvet RTW [ready-to-wear], try to steer away from matching velvet accessories.

“Keep it modern by opting for a dress or a velvet pantsuit, or alternatively a velvet top with denim or a velvet skirt with a white T-shirt to complete the look.”

As for brands to look for, Page says: “Saloni’s ‘Camille’ dress, made famous on social media, the brand is truly the star of velvet dresses. Nili Lotan offers sharp velvet tailoring, while Sleeping with Jacques has provided us with a modern approach to velvet in some of their key shapes, transforming our wardrobes from lounge to luxe.”

Kate Benson, head of buying at The Outnet, says velvet is ideal for the holiday season.

“Velvet, particularly in suit form, provides a luxurious look that is perfect for the festive season ahead, whether you are dressing for an office party or for Christmas Day. I would also keep an eye out for vintage-inspired velvet pieces and velvet headbands that are a great accessory for the holidays,” she says.

To ensure you get good wear out of an investment piece such as this, she suggests looking for muted tones such as forest green, berry and black that you can wear season after season.

As for how to style a velvet suit, Benson suggests keeping the look pared back, but always with an elevated twist.

“The velvet suit is best to be worn tailored with a strong lapel, then worn with a simple vest top to provide the ultimate party look. For a more formal occasion, I would swap out the vest or T-shirt for a crisp white shirt or silk blouse for a more elevated look. I love to pair mine with a statement earring,” she says.