Holds its own very well around bends

Cabin is fit for royalty

Capable of over 700km of range

It won't have that V8 burble or that W12 smoothness

Covid or not, Bentley's Beyond100 strategy to eventually go carbon neutral is still going according to plan. By 2024, there will be a hybrid range for every model in Bentley's lineup. As of today, we already have the Bentayga Hybrid as well as the recently launched Flying Spur Hybrid that you see here.

By 2025, customers will be able to expect the first full electric Bentley model, with existing regular petrol-powered models available for sale. However, by 2026, Bentley will only be offering plug-in hybrids and electric cars for sale, with the target of having only fully electric vehicles on its fleet by 2030.

A start of good things to come

The Flying Spur Hybrid that we recently drove in Beverly Hills, California, is Bentley's next step towards the Beyond100 plan of electrification. Unlike the Bentayga Hybrid, which utilises a 3.0-litre V6 turbocharged powerplant, the Flying Spur Hybrid is armed with a 2.9-litre twin-turbo V6 engine that's good for 410bhp and 550Nm of torque. 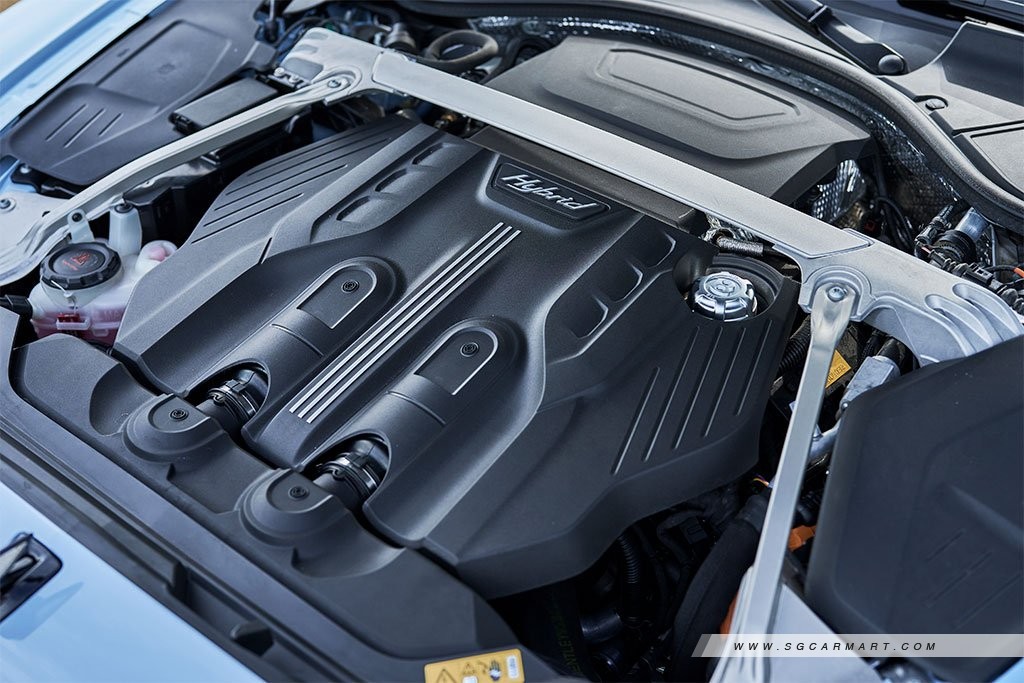 These figures are further supplemented by a 18kWh lithium-ion battery pack and an electric motor making 134bhp and 400Nm of torque, creating a combined output of a mouth-watering 536bhp and a neck-snapping 750Nm of twisting force.

This allows the new 2.5-tonne car to hit the 100km/h mark from nought in just 4.3 seconds, which is just a split second slower than the 542bhp 4.0-litre petrol-powered V8 variant. While all these performance claims by car manufacturers should often be taken with a pinch of salt, it is thoroughly believable here.

Electrification at its best

I also had ample opportunities to put the car through its paces over the course of my 133km (my partner drove the other 175km) test drive route. My biggest challenge with the car isn't its size or its handling, whatsoever. Instead, it is my lack of ability to be as efficient as possible, considering the seemingly inexhaustible amount of thrust the engine is capable of.

And if you, like me, are bothered by the efficiency figures in a hybrid, the Bentley Flying Spur Hybrid has different driving modes to help utilise the battery as and when you need it. 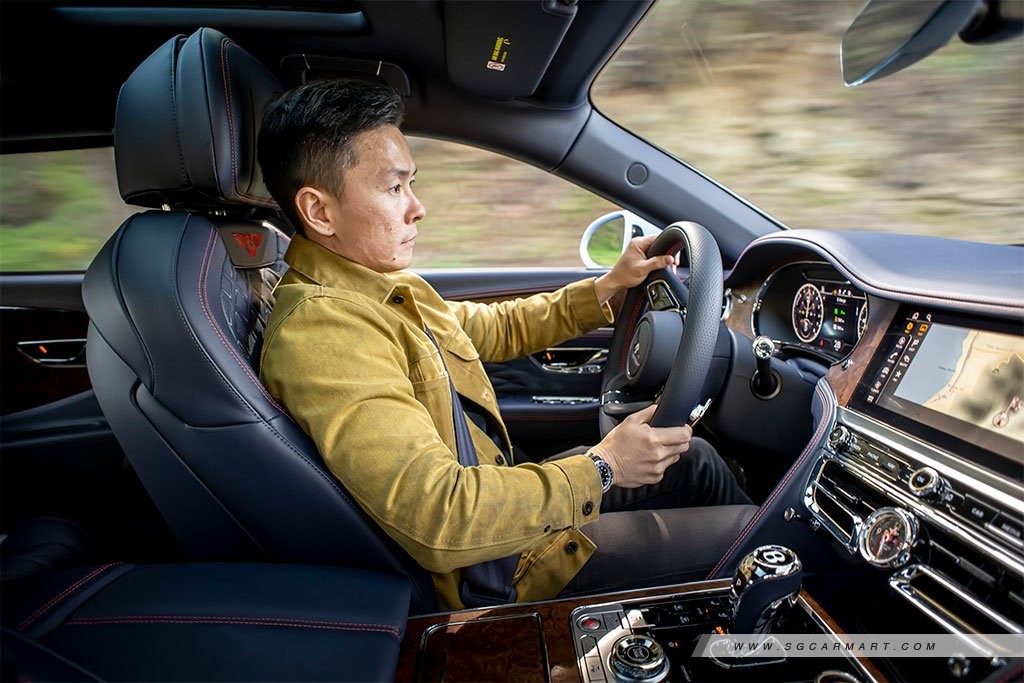 EV mode is engaged as soon as the car is started. The electric motor had about 48km of pure electric driving range on it then. I fully utilised it until it was left with roughly 25km. This mode will be ideal for city driving and shorter journeys, such as those in Singapore. Hybrid mode, as you'd expect, uses both the engine and motor to maximise efficiency.

However, Bentley has a smarter system for this mode compared to others. It uses data from the navigation system and predictive software to use the engine only when necessary. This allows you to fully utilise your electric motor before tapping on your engine before reaching your destination. Lastly, the car has a Hold mode that saves the battery's charge for later. 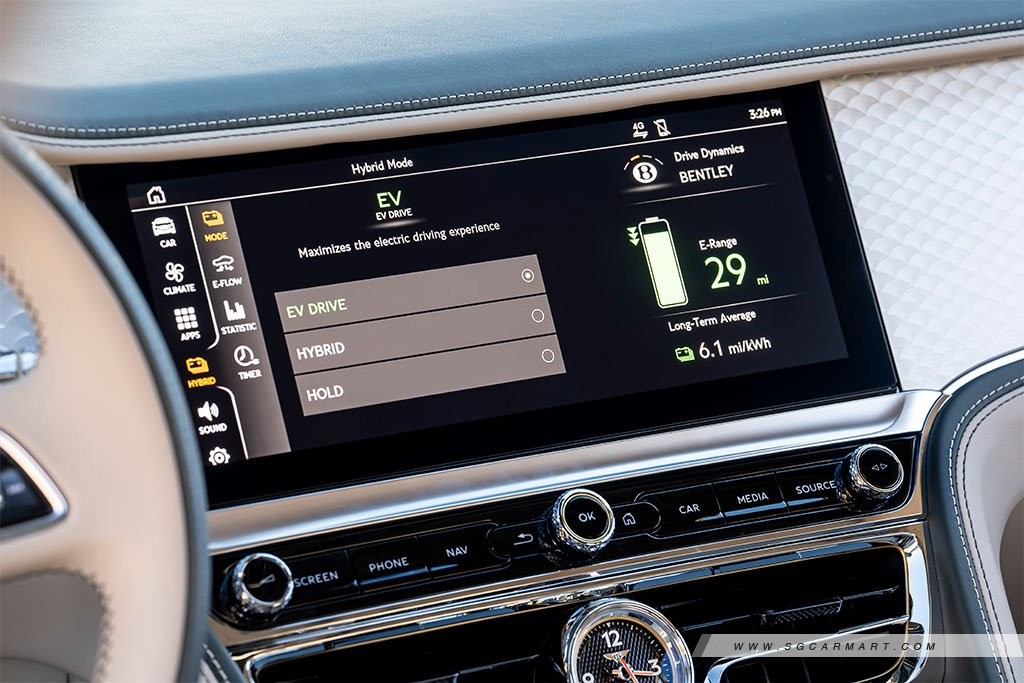 I was mostly on Hybrid mode during my time with the car. I could hardly tell the difference when the car toggled between the electric motor and the engine. Everything seemed to be happening very seamlessly and efficiently, as it should. I managed to clock 11km/kWh during my time behind the wheel.

High on comfort and driving dynamics

What is also seamless, thankfully, is the way the car handled itself around the twisty bits. Despite its monumental posture and size, piloting the Flying Spur Hybrid is a breeze in Los Angeles. The size of the car shrinks around you the faster you push it around sharp bends and blunt curves.

Of course, as you'd expect, I suspect that buyers of this car wouldn't be too hard on it as I was. Comfort, above all, should be their priority and in that aspect, the Bentley doesn't fail.

Despite being on 21-inch shoes, road noise is practically unheard of. In fact, because the cabin is so well-insulated, the only noise I could hear was the music from the playlist that was provided by Bentley. And, even then, the volume was already turned down low. 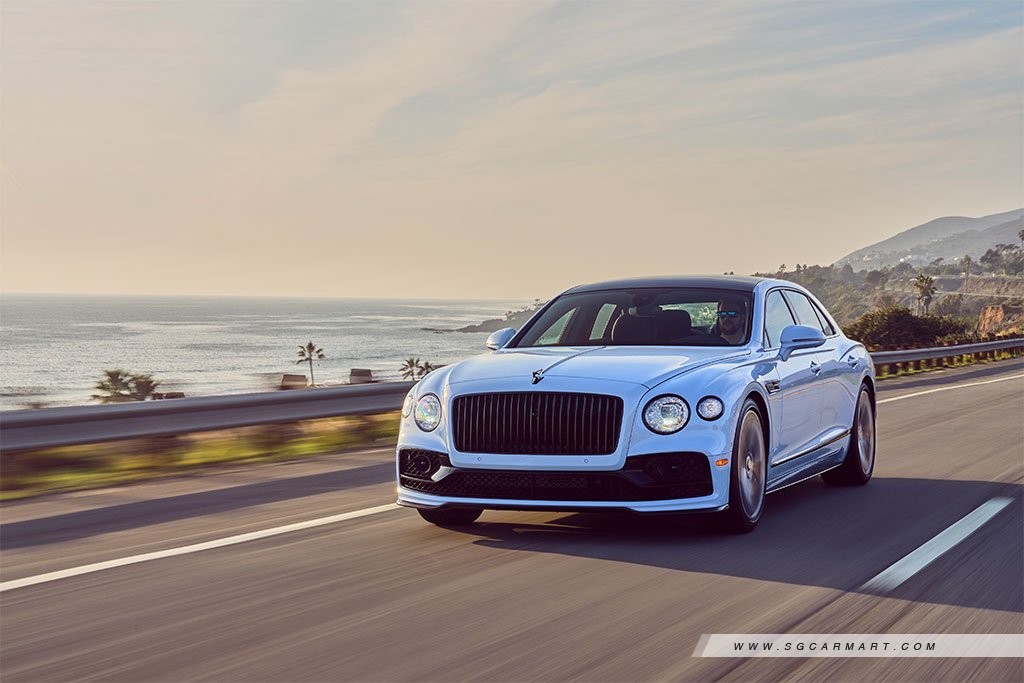 More impressively, despite bumpy highway roads and uneven tarmac along our routes, the Flying Spur Hybrid managed to soak everything up neatly and nicely, without sending any vibrations into the cabin. And to showcase the car's comfortable capabilities, I had the chance to be chauffeured back to the hotel to experience the back seat, which was nothing short of pure elegance and enjoyable.

Fit for royalty, and for you and me

But that's really expected from a carmaker like Bentley. The cabin sets such high standards that only the most demanding and, perhaps, unreasonable critics will complain, when there's really nothing to. 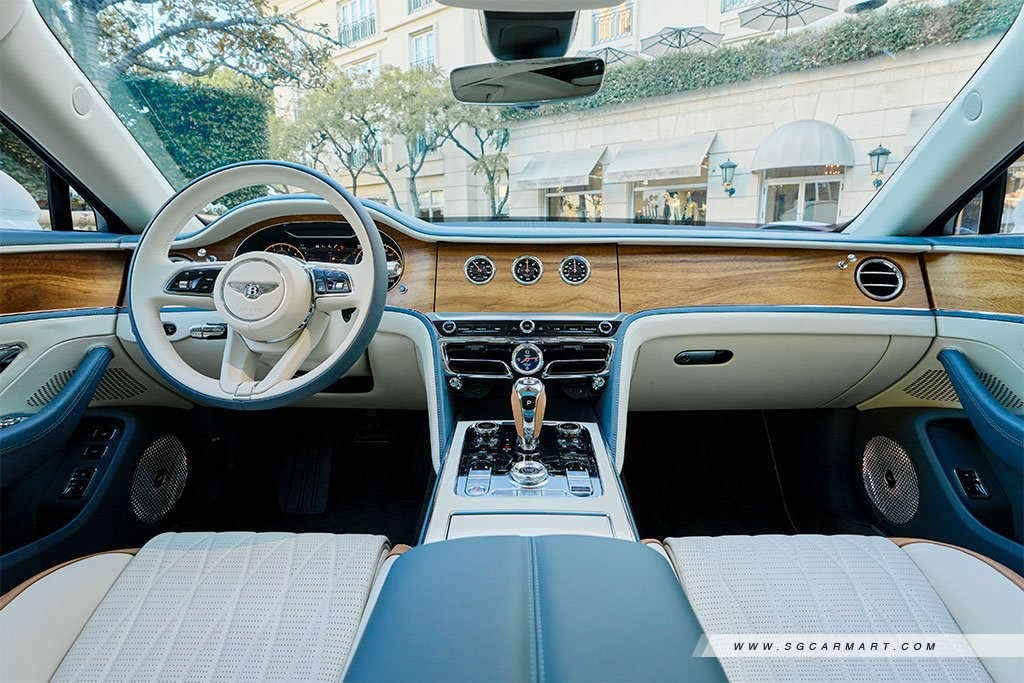 We're talking about impeccable attention to details on every part of the inside. From the double-stitched leather and shiny wood trimming with clear lacquer, to the chrome switchgear and back-soothing seats, this grand tourer is certainly fit for royalty. Space wise, the boot capacity stands at 351 litres, which will suffice for your regular golf and shopping bags.

It's also on the inside where the new Bentley indicates itself as a hybrid model by delivering relevant information such as range and battery's state of charge to the driver.

The Flying Spur Hybrid also differentiates itself from the regular models with the hybrid monikers that are nicely spread throughout its sheet metal, just so onlookers know of your 'green' credential and that you haven't quite over-splurged on a W12 model. 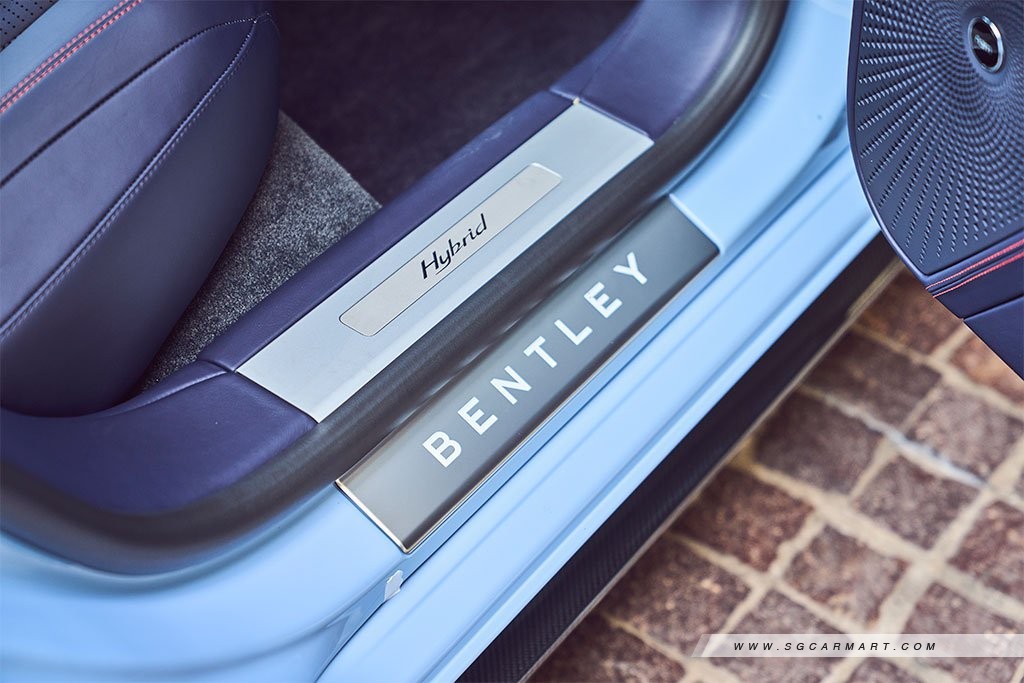 Our test car also came with huge 22-inch 10-spoke shoes that matched the nice baby blue paintwork (Bentley calls it Jetstream II). Not to mention the black bits on the side window surrounds, front grille as well as quad tailpipes that give the car that subtle aggression yet sophistication as a gentleman's car.

Still, if this colour isn't quite for your palate, there are six other standard colours you can choose from, but this is after all Bentley. If nothing works for you, you can have a look at the range of its 60 exclusive colours from Mulliner - Bentley's personalised department.

It's coming your way soon

The Bentley Flying Spur Hybrid is expected to arrive in Singapore in the second half of this year. When it does, it should set you back approximately $949,999 (as of time of writing), excluding COE, GST, options and insurance.