Designs on Asia: Living with rose-tinted glasses in a 3-room flat in Bidadari With HDB blocks sprouting up thick and fast, Singapore’s concrete jungle gets denser by the year. One consequence of this is the lack of views from most HDB homes (unless you count gazing directly into the opposite block as a view, of course).

One young couple in the Bidadari estate faced just such a problem for their new three-room flat. Surrounded by a cluster of BTO blocks, their windows overlooked only neighbouring flats, adding to the claustrophobia of the small flat.

To mitigate this, local design practice Open Studio turned the home into a space of reflection – literally.

Knocking down the wall between the kitchen and living room, they replaced it with a gleaming gold pod stretching from floor to ceiling. Reflecting the pink palette of the interior, this storage pod bathes the whole space in a soft wash of rose and gold. 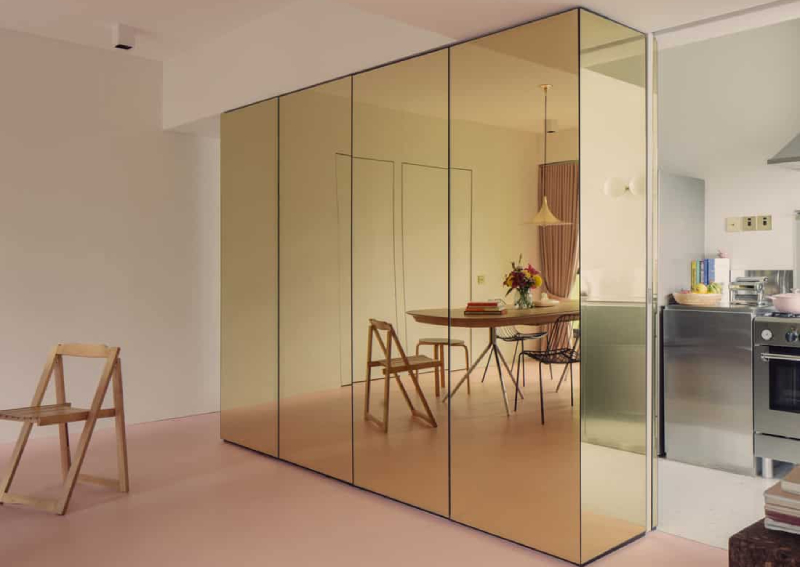 “The gold pod was part of the design brief from our clients, who are both in the creative field,” shares Jax Tan, co-founder of Open Studio. “They were enamoured with 'The Warren' apartment designed by Nicholas Gurney, featured on the Youtube channel Never Too Small.”

Its purpose is first of all functional – dividing the living room and kitchen, while sleekly concealing any clutter behind its reflective doors.

The result, however, is undeniably aesthetic. “It serves as an object of attention, diverting one’s gaze from the lack of views outside the apartment to the space within,” Jax explains.

Whereas storage tends to be tucked away in corners to enhance space, the mirrored pod gives the illusion of doubling the space while commanding pride of place. 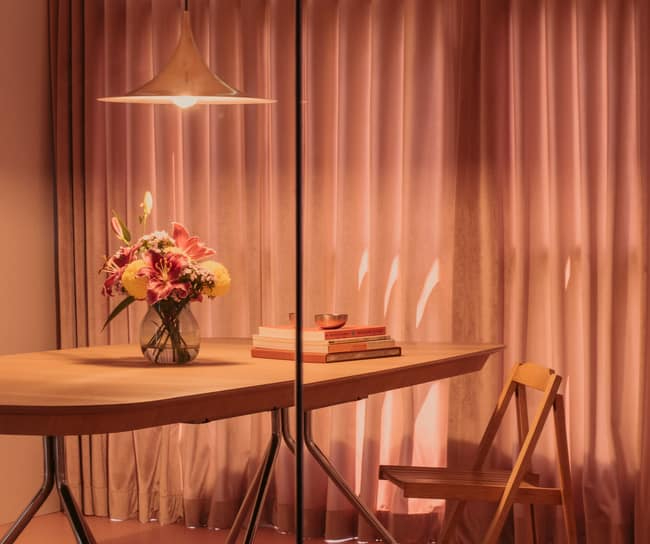 As natural light flows in through the windows, it bounces off the blush-pink microcement floors and gets mirrored in the pod, creating a rosy glow throughout the home.

“We ended up with what we called a ‘rose-tinted’ daylight,” Jax says. Left a bare white, the walls too reflect this ambient glow. Talk about living la vie en rose. 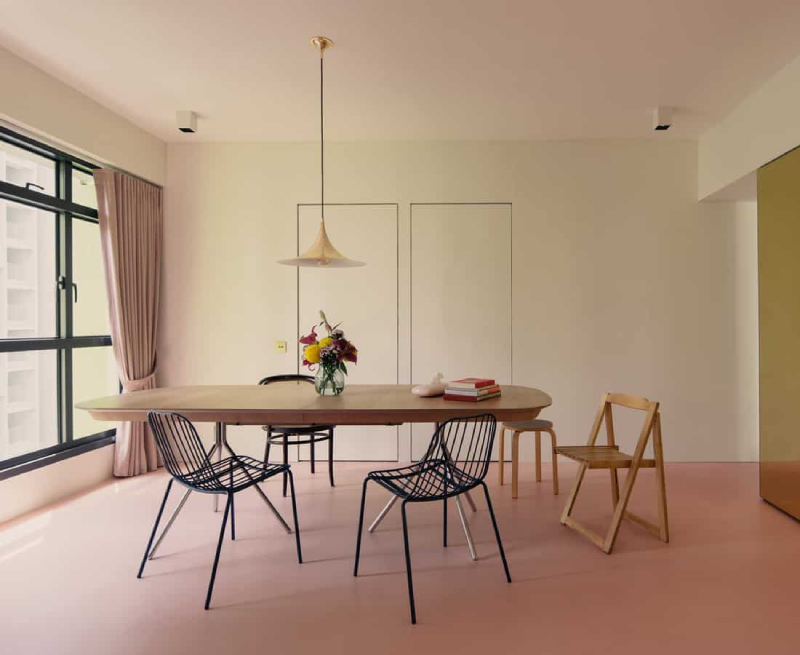 To reduce the cramped feel of the 65 sq metre flat, the designers embarked on a complete overhaul of the layout.

The walls originally dividing the living room, one bedroom, and a bathroom were knocked down and transformed into a spacious, open-plan living area. Given the different ceiling heights of the original rooms, this was not without its challenges. 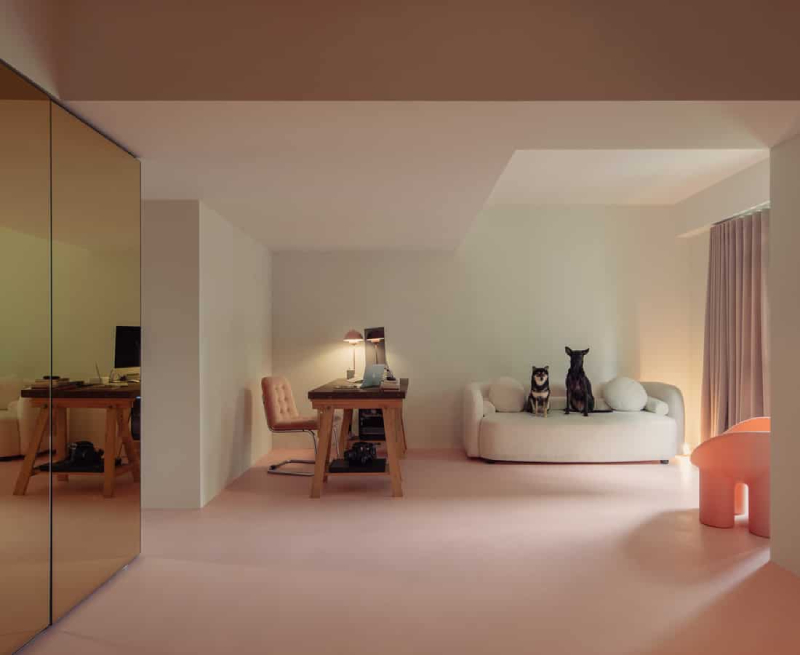 “The original bathroom’s ceiling beams were concealed, resulting in a lower ceiling for one section of the intended living area,” shares Jax. This section was converted into a cosy study area, such that one half of the couple can get work done while still hanging out with the other in the living room.

To keep the look clean and airy, furnishings were kept minimal – a pink padded desk chair here, a rounded white sofa there.

The living area flows into the dining space, decked in eclectically mismatched chairs and centered by a gold pendant lamp. 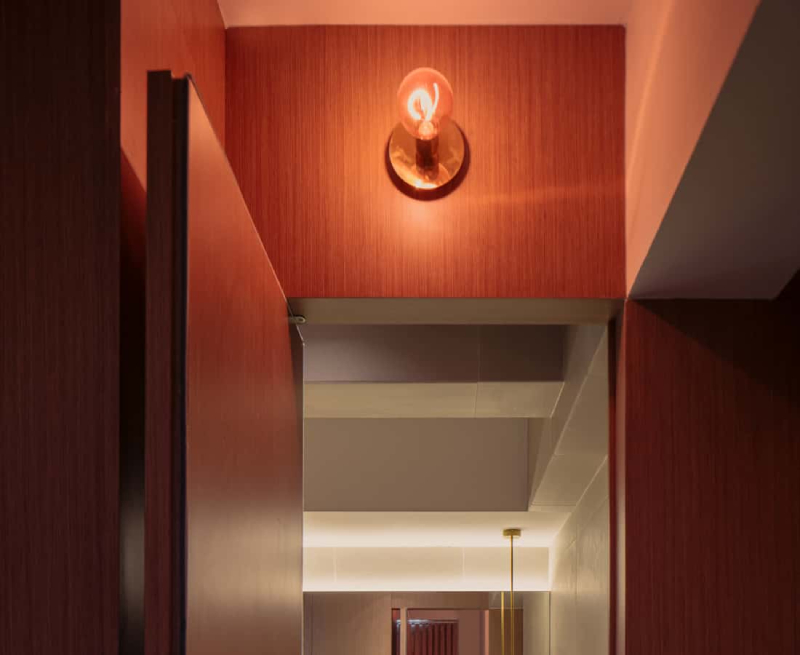 The rose-and-gold glamour extends to the master bathroom. Perched over the entranceway, an exposed lightbulb serves as a signal light – switching on when the bathroom is in use and casting a rosy glow over the warm wood walls.

Inside, the sizeable bathroom sink doubles up as a vanity area, topped stylishly with pink Rosso Orobico marble. All-gold fittings – from the gilded washbasin to the power socket – turn up the glam factor, and in one corner, a gold-tipped lightbulb hangs from a golden rod.