The Harley-Davidson Fat Boy is one of the brand's most iconic and recognisable models, even featuring in a spectacular jump in Terminator 2: Judgement Day, one of the most famous motorcycle stunts in film history.

31 years on since it was first introduced to the world in 1990, the Fat Boy has undergone some significant revisions, including the introduction of Twin Cam engines, as well as a new chassis introduced in 2018. However, one thing's for sure - the old-school feel continues to endure.

This MY21 model brings some very subtle cosmetic updates. There's a more generous use of chrome trimming now, and you get a digital fuel gauge in the main cluster (it was previously analogue, and located on the dummy left fuel cap). 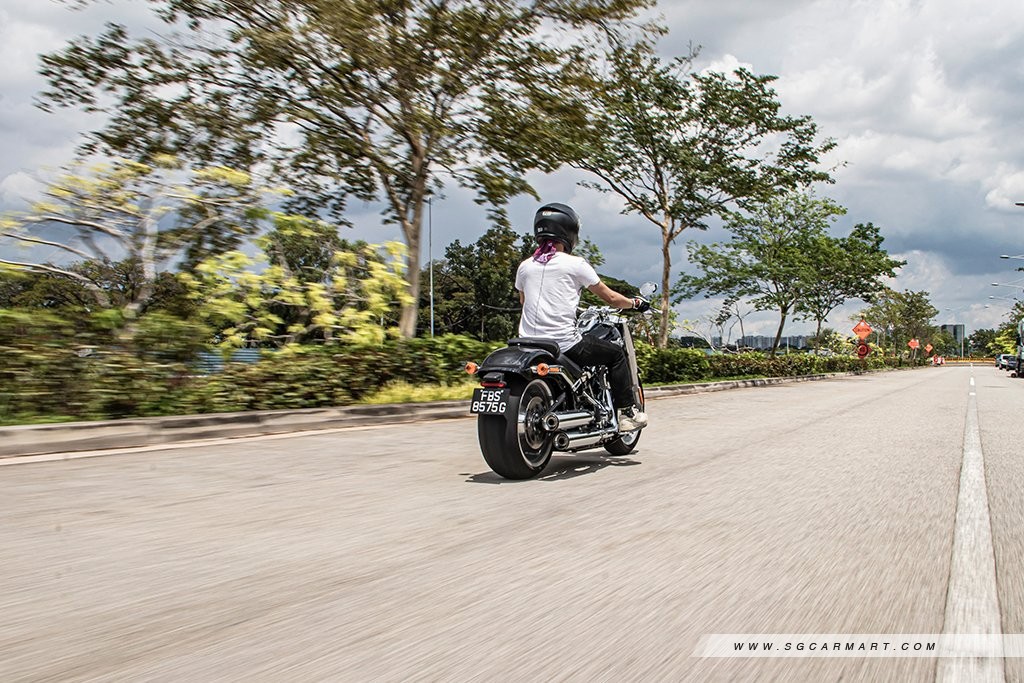 Beyond that, the rest of the bike retains its iconic styling. Chunky front fork, wide handlebars, solid Lakester wheels, long and low-slung profile and, of course, those fat 240mm rear tyres.

While the styling may divide opinions, there's no denying that the Fat Boy makes an immediate visual presence. This is what springs to mind when most people think of the Harley brand. Some may lament the lack of innovation, but I think in this regard its respectable that Harley has stuck to its guns. That said, the Fat Boy has a 'best angle', and that's 100 per cent the rear - stocky, imposing and menacing.

Powering the Fat Boy is the familiar 1,868cc Milwaukee-Eight 114 V-twin engine. With 155Nm of torque on tap, acceleration is brisk and effortless. It makes riding this 317kg bike pleasingly easy to ride once you get moving. Pick up is smooth and responsive, and when you're rolling along you don't really think about the weight of the bike. 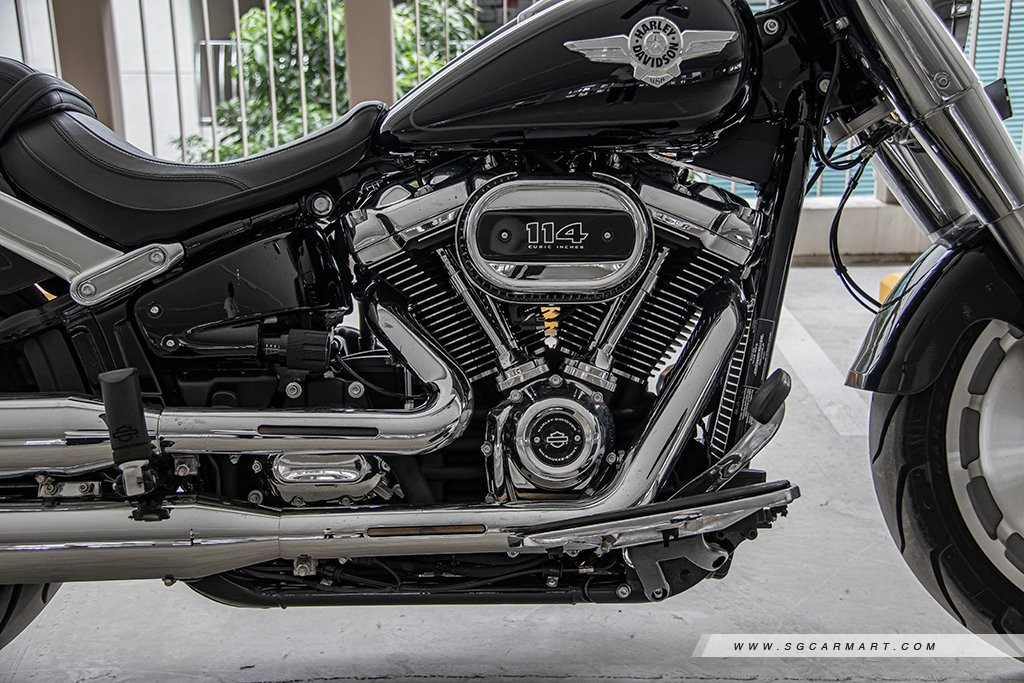 The overall riding ergonomics is also surprisingly neutral, with the bars relatively low for a cruiser of this ilk. This leads to a very comfortable riding position.

However, get into a few corners and the innate characteristics of this bike will show. The fat tyres both front and rear means that steering with your arms can be quite a workout. This is a bike where you really need to steer with your body.

The super-wide rear tyres also means that you do have to adjust your riding style slightly. You can't take corners as aggressively as you'd normally would.

With the fat rear tyres, the bike will tend to understeer and wash out if you are going to quickly. That's just basic physics. Also, if you hit bumps anything other than straight on, the rear tyre will tend to push away from it. 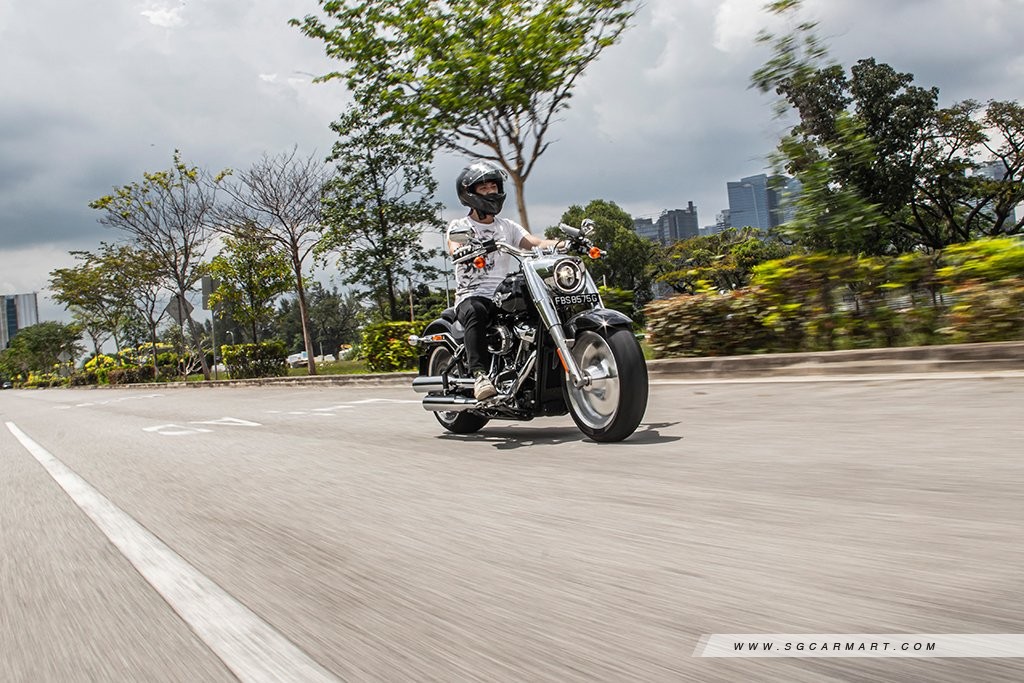 As a result, this bike actually goads you into riding in a more leisurely manner. You don't have to attack corners hard, and the Fat Boy is actually most enjoyable when you aren't pushing it hard. Even cruising along the highway at 70km/h, I found it to be entirely relaxing and enjoyable.

Also, the bike is not as unwieldy at carpark speeds as you'd imagine it to be. Even when needing to peddle the bike backwards, it's pretty doable (especially when compared to something like the Electra Glide, which is much heavier).

Cruisers aren't really my thing. That said, I found myself really enjoying the Fat Boy. It's more approachable than I had expected, plenty comfortable, and consistently evokes a particular kind of attitude that has come to define the Harley brand.

It's not always the easiest bike to ride. The fat rear tyre makes for some distinct riding adjustments if you've never ridden a bike like this before. The rear brakes are kind of mushy, and I also found neutral a little tricky to find. 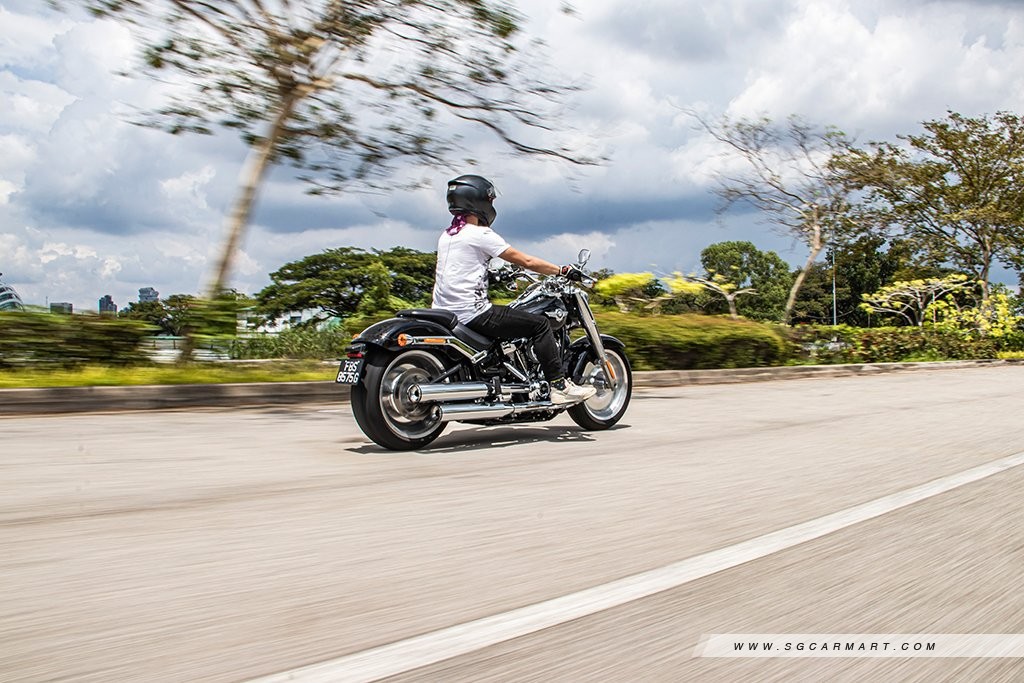 But I suppose that's really part of the Fat Boy experience, and a key aspect of its appeal. It shouldn't be easy, because this particular kind of style, feel and personality shouldn't come easily. The brand's resolute determination to stick to the Fat Boy's old school charm? That's something anyone can appreciate and respect, 31 years on.