Audi is perhaps one of the legacy automakers at the forefront of EV technology. Their e-Tron range of cars is squarely aimed at a certain electric automaker from the USA, albeit built to your typically Germanic standards.

At least, on a technological front. The e-tron cars have every bit the technological mettle to go toe-to-toe with the best Texan EV manufacturer, just sans the latter's native charging infrastructure and perhaps the 'affordability'. 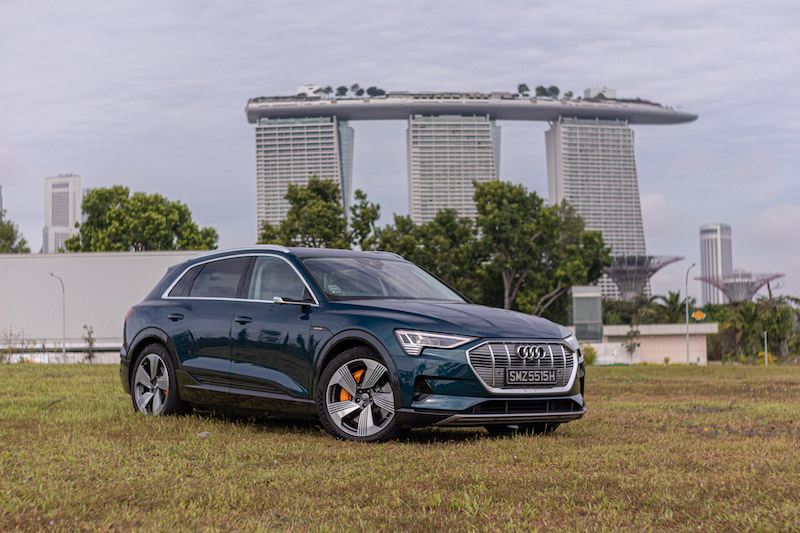 The Audi e-tron's traits reminded us very much of a Sumo wrestler the more we spent time behind the wheel — it has a large body that did not hinder its mobility.

Engorged is an understatement

And we mean large. At over 4.9 metres, the e-tron is the second-largest SUV offered by Audi today. Whilst on the roads, the size is a massive (literally!) bonus, it can induce some bum-squeakiness as you thread your way through the tighter confines of an older car park. 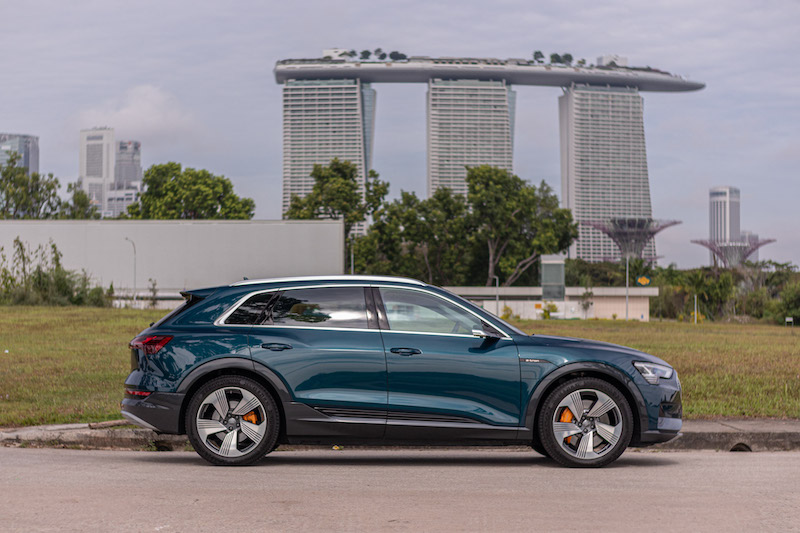 In some of these car parks, you'll also find that the lots are just a smidge too short — you'll find most of the front end past the centre line of the front axle sticking out past the end of the lot. We opted to park the car at far ends of such parking spaces to avoid blocking the paths of other motorists.

From the rear 3/4s, the car looks like any sensible, grown-up Audi SUV. It's the front where the Audi designers have taken some creative liberties in its styling. In the blue our test car was finished in, the silver front grille does make the car look like something you'd find on a motor show stand.

And not as a pre-production car too, but as a full-scale clay model awaiting design confirmation from the higher-ups. The headlights have also been designed with this ethos in mind. 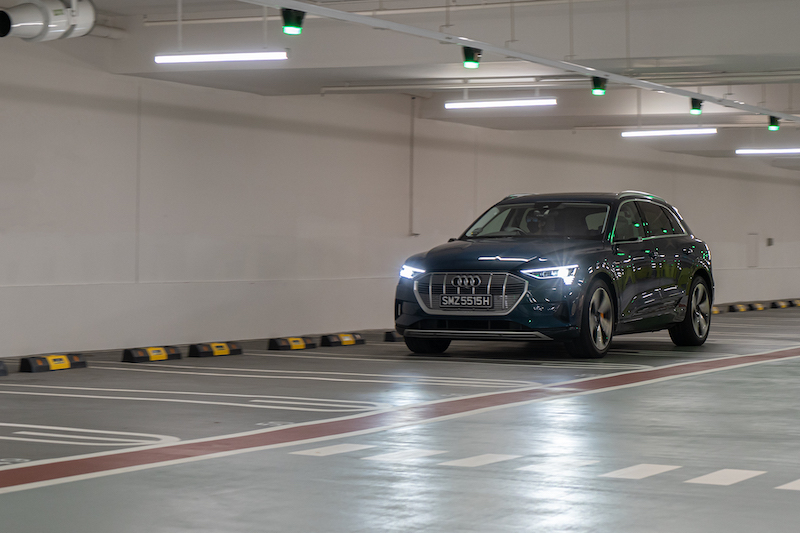 Again, we see nothing wrong in playing into the futuristic powertrain of the car. It isn't in-your-face electric, but these subtle variances from regular Audi offerings do help you feel more special, and it does turn heads especially when you are driving around your neighbourhood.

It is a good-looking, albeit perhaps slightly bulky, car, with some unique touches that hint at its eco-credentials, and even its performance.

…the e-tron is no different than your usual Audi offerings. This means that you get all the familiar switchgear and materials as you'd get in a comparable petrol-powered SUV from the German automaker.

Audi did not feel compelled to make the interior intentionally sparse and spartan, in a bid to make the car feel more futuristic, and we applaud them for that. After all, usability should be of utmost priority when you're behind the wheel. 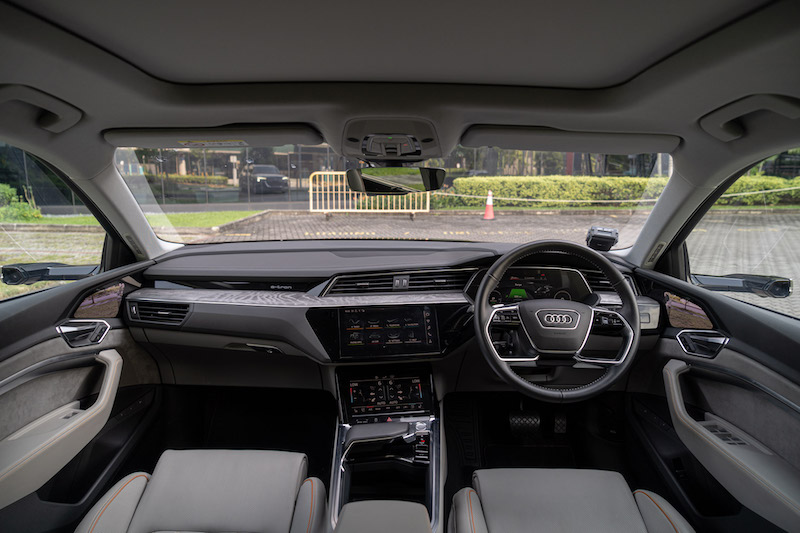 The car's climate control is controlled via a touch screen, which can double up as a keyboard for the main MMI system when needed. As the screen is of a decent size, and the individual buttons on the screen are large enough, we found little trouble adjusting the temperature of the aircon even when on the move.

What we did not like was the touch-screen-meets-physical-button controls for the drive select and hazard switches. They were cumbersome to use and definitely didn't feel worthy of being in an expensive Audi.

Despite the car's dimensions and sheer mass, there's an athleticism in which the e-tron conducts itself with. The floor-mounted battery pack means the centre of mass is kept desirably low, and the sharp steering rewards the driver with decent traction on turn-in.

On this front, the car's eagerness to dart about traffic really helps it to feel like a much smaller vehicle. But all the initial grip and savage instant torque cannot fully disguise the fact that this is a very heavy car. What you get on a spirited drive, therefore, is this feeling of an unusually grippy car on initial input. 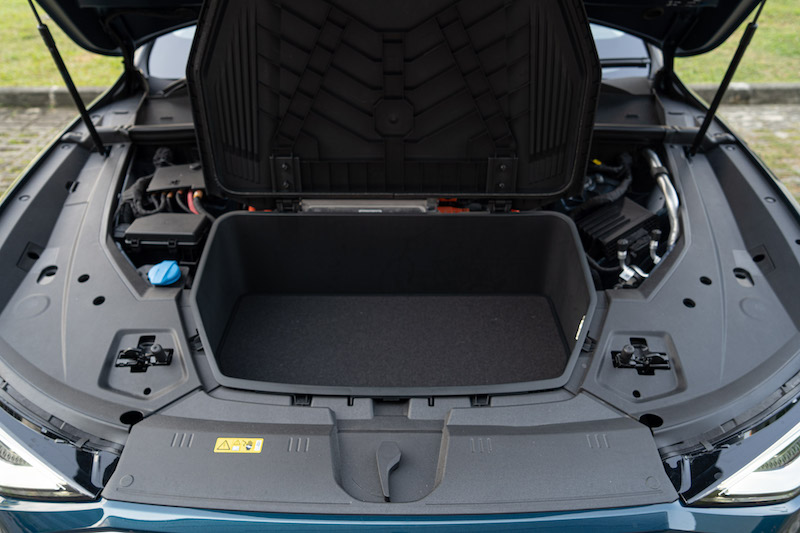 Which then very quickly transitions into understeer as the sheer weight of the car pulls it off line. We also didn't particularly fancy the anchors.

Whilst they are absolute units, as with all EVs, the car initially uses regenerative braking to decelerate, only applying the friction brakes later on in the pedal travel. This makes for a very odd feeling brake pedal.

Without a doubt, the e-tron's party piece would have to be its dual electric motors. Combined, the car is good for 400 bhp, all of which is available literally on a whim.

Off the line, the acceleration does provide a decent shove into the seat, and when on the move at any speed, you are just a slight twitch of the right foot away from scarcely-believable speeds, figures that any law-abiding citizen may scorn at you for. 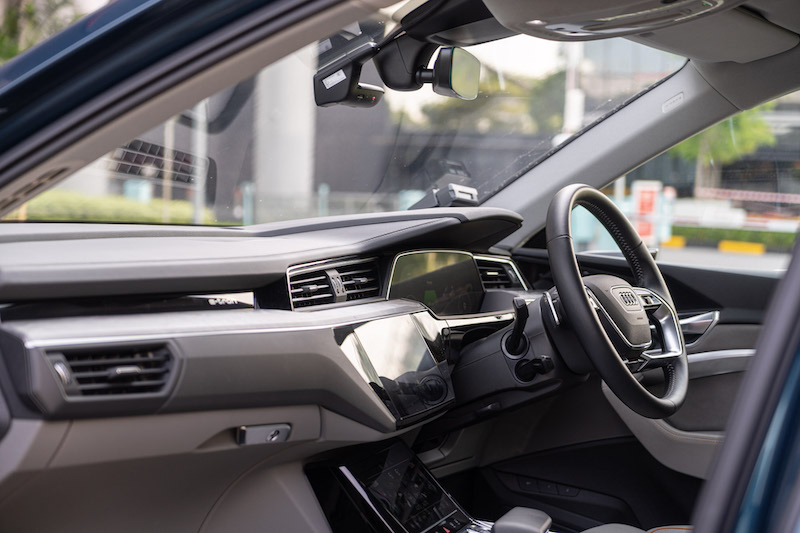 What isn't so good, was the optional virtual mirrors our test car has been equipped with. They look cool on the outside and definitely add to the futuristic theme. However, these are practically flawed. Firstly, the screens for these cameras are small and offer a very narrow field of view.

As they are screens, placed at an awkward angle, you'll really struggle to have any depth perception, which can make filtering lanes tricky. Also, and this is probably very unusual in a car review, the camera's low light performance leaves much to be desired too. 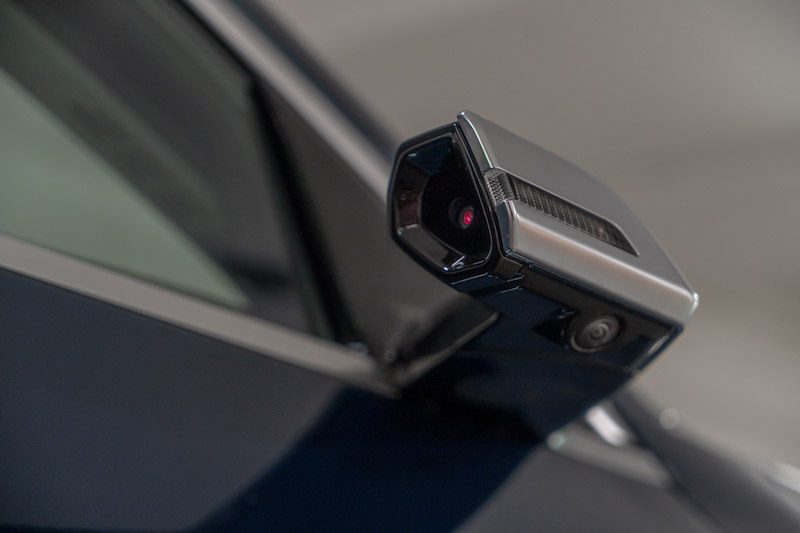 We had to rely on a mix of the virtual 360 camera, and the rearview mirror (it's actually a piece of glass thankfully!), to position the car.

It should have no business being as rapid as it is...

After all, this is a big, bulky SUV with plenty of space inside for five adults. But it is in a car like this that electric motors can really shine. It has the ability to transform a car that may otherwise be sluggish and dull to drive, into one that is properly fun for daily use. 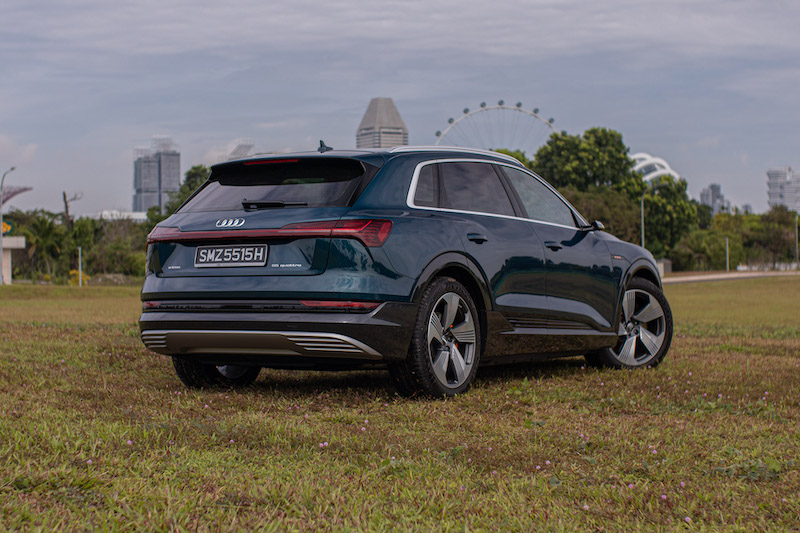 The range is commendable too. Despite the erm...mistreatment of the loud pedal, we still returned a range of around 230km per charge.

Do keep in mind also that we kept the aircon running as we hopped in and out of the car for the various photoshoots to capture the images for this review.

You'll get more real-world range with some finessing of your right foot, and if you opted to not leave the aircon running for prolonged periods when you're not in the vehicle!

The article was first published by Motorist.