Are VR headsets safe for children? Here's what parents need to know Virtual reality (VR) seems to be the new "cool" these days, especially for gaming. It offers an immersive content viewing experience.

From playing video games, to watching 360-degree movies, plugging a VR headset will put you right in the middle of the scenario.

Naturally then, not just adults but children are also interested in getting a VR headset that promises a completely radical viewing pleasure. And not just gaming, but there are plenty of educational content available for kids to view, which makes a VR headset a logical buy.

But are VR headsets safe for children?

There are a lot to debate about and parents should know the pros and cons before buying their kids one of these devices.

In fact, several VR headset manufacturers assign 13 years and above age restrictions. User guides will also warn you of dangers like eye strain, headaches, nausea and in some extreme cases, seizures, because of extended usage.

So before you order one of these VR headsets for your child, here's what you need to know about them.

Experts suggest that younger minds may have a hard time differentiating between the real world versus a virtual one. This is why most companies recommend VR content for older kids instead of younger children.

This is particularly a problem when your child is hyperactive and does not realise what and how they're bumping into with the VR headset on.

When you have the VR headrest on, it makes it difficult to maintain your spatial awareness. The child would be in a rainforest or a desert in the game while walking around in the living room in reality.

The odds of them crashing into the furniture, walls, and tripping on the staircase are simply higher.

In a 2009 study, some elementary-age kids entered a VR simulation using headsets where they virtually swam with orca whales.

Meanwhile, another set of children watched the same content on TV.

The study concluded that kids who experienced the video on VR remembered that they were swimming in the ocean.

This happens because kids under the age of 11 years may not have the higher-level brain functioning required to differentiate between what's real and what's not.

In some cases, brands like Oculus and HTC will help you set virtual barriers based on the size of the room. If a child is leaving the play area without them realising it, it will automatically stop the VR play. However, it still poses a risk.

Extended use of a VR headset can lead to nausea or dizziness. This happens since your eyes give you a different picture compared to the rest of your body.

So your child could be playing a game about eagles racing but their body knows that they are firmly on the ground. There is a disconnect between what the eyes see and the body feels, triggering motion sickness.

Of course, the effects are different for all and while some kids may be affected early, some do not feel motion sickness at all.

Parents also need to know about the vergence-accommodation conflict where the brain cannot handle that your eyes are seeing objects that are yards away on a screen smaller than the eye itself. These trigger headaches with prolonged use.

Doctors recommend kids use VR for a maximum of 15 minutes at one time. This is aimed to reduce the effect of strain on the eyes. Even during extended use, children should take a break for at least minutes between the VR sessions.

As a principle, always start off the child with the VR headset with little movement so their eyes and brain can adjust to the virtual environment.

Seizures are a possibility in extreme cases

Photosensitive or epileptic seizures due to virtual reality headsets are a problem. Flashing lights or patterns can trigger the same.

This isn't too different from kids being triggered by watching something similar on TV or social media platforms.

Some games do come with a warning if there are flashing lights, so do be careful and check the fine print for such details before purchase VR games. 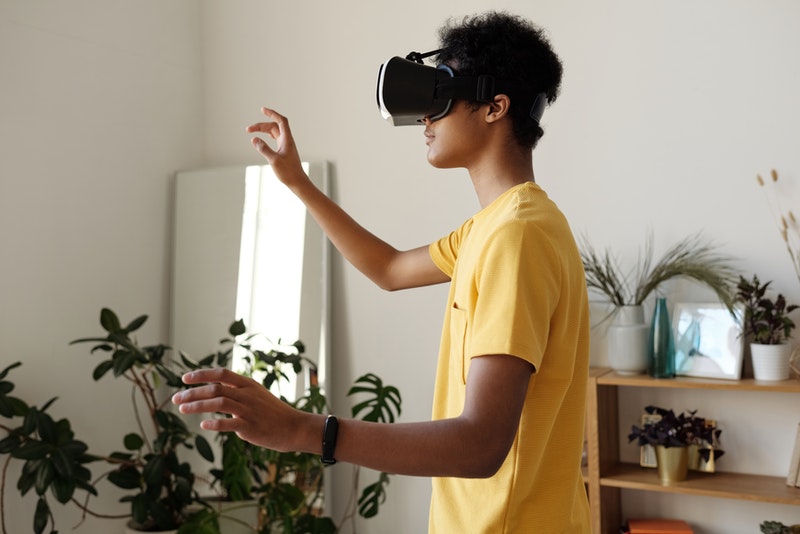 Headaches due to eye strain is a common issue with kids using VR headsets. That's one of the main reasons why manufacturers recommend buying one of these for kids who are 13 years and older.

Manufacturers design VR headsets primarily for adults. The lenses then may not correctly adjust to the child's eyes that may make the screen blurry further causing strain on the eyes.

Your child may not be able to identify this issue and there's no way for you to check unless they say so.

While some headsets let you adjust the lenses to match your pupils, this feature may not work for a child's eye.

Ideally, invest in smaller, VR devices for your child and choose the 15:10 play-to-rest ratio.

You will understand the after-effects after a bit of trial and error.

If your child needs corrective lenses, please make sure they wear that before putting on the VR headset.

VR headsets are great in terms of offering new experiences to children. But parents need to supervise and exercise precaution. A scary monster in a game and odds are your child will be traumatised for a long time.

Do weigh the pros and cons before you actually give in to your child's desire.