30-year-old single foreigner polls Redditors on where to live in Singapore, gets a variety of responses Just hours ago, a 30-year old user nicknamed RJL05, presumably an Australian, polled the r/askSingapore Reddit channel for suggestions on where to live when he moves to Singapore.

Apparently, RJL05, the OP (or “Original Poster” of the Reddit thread) is single and has found a job in an office next to the Downtown MRT station. His criteria for a home doesn’t need for it to be near good schools, which should make his house search much easier.

“I’ll be renting to start with, cost is not an issue,” he wrote. He shared that he’s currently paying $4k (currency not stated) for an apartment but is happy to spend more for a nice place once he moves over.

RJL05 has never been to Singapore, but having lived in other cities, he knows it can be pretty boring living in the CBD. So he’s asked if it’s better to live a bit further out in a neighbourhood that has a “little more character”. 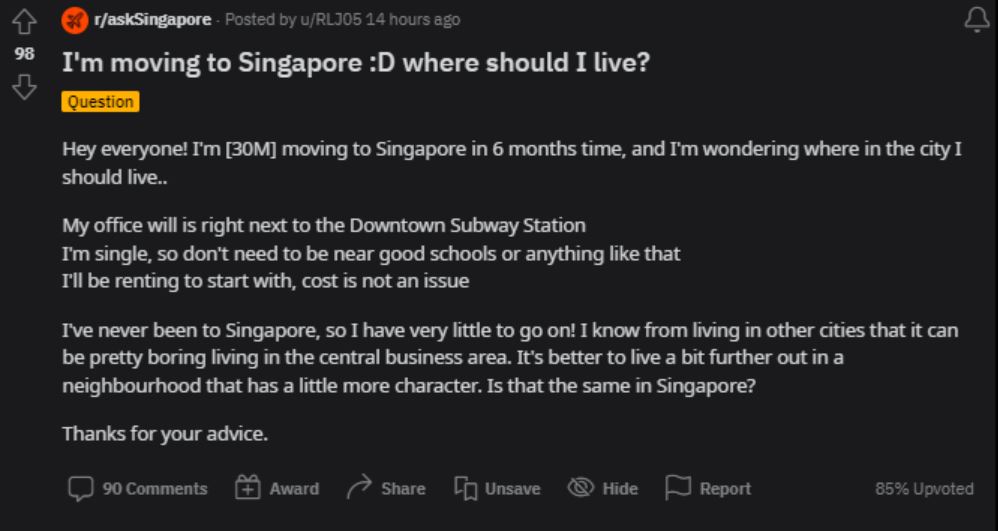 User momobutagirl suggested Bugis because it’s “a few stations away from Downtown station, well-connected, has lots of amenities and some traditional neighbourhood with temples and older malls.” Orgastronaut agrees, recommending properties like Duo Residences for comfort, view, a direct link to Bugis station and amenities.

One particular condo recommended was Spottiswoode Park, but that’s an old development completed in 1979. User Ok-Sand-8467 suggested any of the three newer condos near it (eg. Spottiswoode 18, Spottiswoode Suites, Spottiswoode Residences ).

“All young couples and no families. Glorious. Takes me 10 minutes to cycle to the CBD (at a very sedate pace on cycle paths).”

Another user agrees: “Spottiswoode is an awesome condo, and they have 1-bedders going for about 3k or so. Right near the city.”

However, user LastChildhood cautioned that staying at Spottiswoode Park area comes with some challenges, especially when it rains. “It can get quite difficult to head home if it starts raining, but our taxis are relatively affordable…”

The user also recommends Marina One Residences , which is near the OP’s office. “If you get the right apartment, you’ll have an amazing view.

Some of my friends said that the lifts take quite long because of the number of units in that complex, and some corner apartments have very bad Wi-Fi (bad doesn’t mean slow in Singapore, we are just very spoiled with high-speed Wi-Fi).”

Anywhere along Downtown Line or 1km from a DL station

User Not_A_Sexy_Alien suggested anywhere along Kallang, Newton or Stevens on the Downtown Line since these have considerable expatriate communities.

The user also suggested living near Farrer Road MRT on the Circle Line, where it’s a one-stop away from the Downtown Line (ie. Botanic Gardens) and has a few tall condos in the area.

A quieter area would be HarbourFront or near East Coast Park. He (or she) also recommended renting an HDB apartment (cheap! cheap!) for the true Singaporean experience.

User 2late2realise recommended Leedon Residence along Farrer Road or Gramercy Park along Grange Road (if cost is not an issue).

“The units and development there are very well-endowed and comfortable.” User minangkabau suggested getting a studio apartment at Newton for around $2,500. “My single friends love it, since you’re right smack in the middle of anything and anywhere fun to go.”

A few users recommended the River Valley Road neighbourhood, due to its proximity to the shopping/entertainment district of Orchard Road. One property suggested was Aspen Heights .

There’s also Robertson Quay, described as “very expat heavy” and “from a dating/social life experience, it’s one of the nicer places one can bring their dates home to…”

However, one user said he’s lived in River Valley for a while and didn’t like it at all since there’s nothing there other than housing. “If living very close to Robertson Quay or very close to Orchard, then maybe better. I was on Leonie Hill . Would not recommend.”

Of course, user Mindless_Archer_6410 suggested Tiong Bahru as an option. It’s “one of the OG smorgasbord of hippie cafes, authentic local market & really decent food, near the city centre and just really nice pre-war architecture. There are malls nearby and IKEA down the road.

“It’s a legit local town but also full of foreigner-friendly stuff due to the relatively central location. Probably the only caveat is that it’s not direct to Downtown station. Probably want to check out the walking distance from any of the green line stations in CBD (ie. Tanjong Pagar & Raffles Place).”

User pcl8311, himself a 30-year-old expatriate, posted some advice since he moved to Singapore about eight weeks ago. He’s looked at close to 25 apartments across town and narrowed it down to Robertson Quay (“super central, lots of food options, etc.) and Keppel Bay areas (“nice flats with amazing pools, close to Sentosa, Mt. Faber for cycling and exploring”).

“Ended up selecting Keppel Bay and am loving it so far. I work right next to Downtown MRT as well and can get to work in 12 minutes in a Grab or by bus, 15 minutes by bike when I have the time to shower at the office. Harbourfront MRT is a 4-minute walk but taxis are really cheap so I rarely go through the hassle.

“Tanjong Pagar is also super nice but for me more of a place to go for dinner than to live, same with Haji Road / Kampong Glam. Originally thought East Coast would be where I wanted to end up but after checking out flats there decided it felt a bit too isolated. That said the city is pretty small and you can get between the central areas quickly regardless of where you are.”

No conversation about where to live in Singapore is complete without someone eventually suggesting Yishun.

User blurblursotong2020 says “it’s a very happening town” before others jumped in with links to news of recent slashing incidents, serial cat abuses (in 2015) and more recently, an incident where a teenage boy was stripped naked at a barbecue party.

Other users jumped in advising the original poster (RJL05) to ignore these comments, saying Yishun is an excellent place, thanks to the delicious food at Chong Pang market. 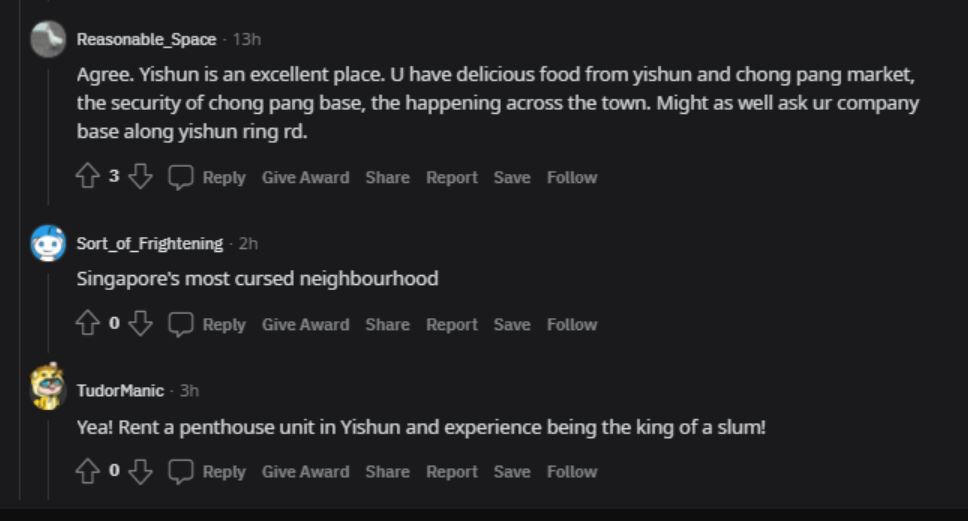 For some commentators, Singapore’s ease of travel makes living farther away from the CBD not so bad.

User Outrageous_Horse_157 suggested Joo Chiat/Katong, where the area’s got “some buzz, character and amenities at your doorstep (with a good demographic mix). Food is particularly good in the area and the beach / East Coast Park is fairly close by. Siglap is another option; albeit a little quieter.”

Any suggestion on living in the West seems to get shot down pretty fast.

Finally, user Mercydus probably has the best advice for the OP and it has nothing to do with which neighbourhood to consider: “Only thing you probably need to get used to is the heat and humidity. The whole of Singapore is so well-connected via public transport… I can guarantee you won’t need any help at all.”