In the wake of Li Jinglei's explosive nine-page online essay depicting her ex-husband Wang Leehom as manipulative and a philanderer, Wang Leehom's dad, Wang Dazhong, has stepped out in defence of his son.

In his handwritten letter to Taiwanese media in the early hours of Sunday (Dec 19), Wang senior stated that "there was never any cheating". He also stressed that his son Leehom "is not scum".

The elder Wang also shed light on the couple's marriage and it's a matter that he now "deeply regrets" agreeing to.

Sharing that after Jinglei fell pregnant while the couple were still dating, she had initially assured Leehom "not to worry", and that she would raise the child on her own.

However, Wang alleged that she "very quickly changed her mind".

"She said that if they didn't get married, she would expose him and ruin his career," Wang said. 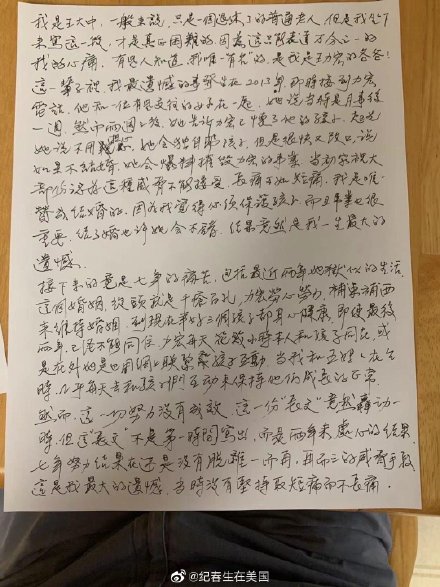 Leehom's dad added that at the time, "most of the family were of the opinion that such threats were not acceptable" and did not agree to the marriage.

"I was the only one who approved of them getting married, because I felt that I had to protect the child and (Leehom's) career is also very important. I thought after marriage perhaps she would be better, but the decision has turned out to be my biggest regret."

Wang added how the subsequent seven years of marriage were torturous and that the last two years were "a living hell" for Leehom, who "tried his hardest to maintain the marriage".

Wang also claimed that Leehom and Jinglei were separated since 2019, when the divorce was first initiated.

"Even in the last two years when they didn't live together, or when he was overseas, he would often go online to interact with his children. Whenever my wife and I are in Taiwan, we would also visit the children daily to give them some sense of normalcy. But our efforts have gone to waste."

Alleging that Jinglei's letter was more of a calculated move than one done in a spur-of-the-moment, Wang urged the public "to be objective".

"The reality is the divorce has been in motion for two years, and both parties have signed the papers," said Wang, adding that Jinglei's requests for "hundreds of millions", a house, a car, living allowance, two nannies, a helper as well as a driver have all been agreed to.

With regard to the rumours of infidelity that Jinglei claimed had plagued their relationship and marriage, Wang stated: "They have lived apart for more than two years and Leehom has not been unfaithful during this period."

In his parting note, Wang wrote: "Leehom is not scum, and his children should not be left with that impression." 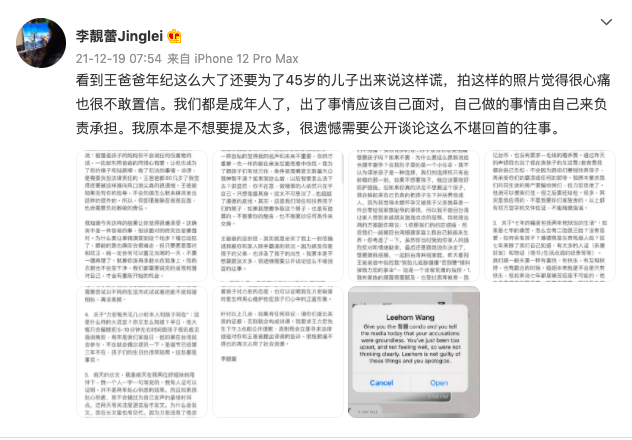 Li Jinglei responded to her former father-in-law's claims several hours later, threatening legal action against father and son if her ex-husband does not make a public apology.

On her Weibo account, she wrote how it's "heartwrenching and unbelievable" that at his advanced age, Leehom's dad still has to "lie for his 45-year-old son".

In yet another lengthy statement, Jinglei admonished Leehom for not apologising yet choosing to "hide behind your father" and addressed Wang's accusations against her.

Refuting his claims that she had threatened to derail Leehom's career if he didn't marry her, Jinglei wrote that the couple had marriage in mind while they dated, as Leehom had told her "multiple times that he was getting older and wanted to start a family".

Hence, they never used any contraceptives during their relationship and naturally got pregnant.

"When I told Leehom I was pregnant, he was originally very happy and wanted to share the news with his family. But after their discussion, he asked me if I would consider aborting the child, or if I could keep the baby but not get married," wrote Jinglei.

As she didn't want an abortion, she gave Leehom two options — to get married and move to Taiwan to start a family, or that she would "go into hiding" to bring up the child by herself. "In the end, you said you decided that you wanted to marry me."

Regarding the "millions of dollars" that Wang claimed she got through the divorce, Jinglei stated that she only requested that her children's standard of living be maintained.

"I did not ask for millions of dollars, nor did I claim a single cent of alimony from the divorce," wrote Jinglei.

And on allegations that their marriage was "torture" and "a living hell for Leehom", Jinglei retorted that "if our marriage was so bad, how did we still have a second and third child?" She also shared how Leehom would usually only spend "five to 10 minutes" before bedtime to speak to the children, and not "hours" as Wang had declared.

"This is the third year that he won't be around for Christmas, and he's often absent for the kids' birthdays. These are facts."

As for the statement that Leehom is "not a scum" and that the children should not have that impression, Jinglei shared: "I don't think he is as well; he's just made some mistakes and just has to learn from them."

She added that she always makes an effort to put in a good word for Leehom in front of their kids, even when he's absent for family events.

At the end of the message, however, Jinglei issued an ultimatum to Leehom — to issue a public apology or hear from her lawyers.

She wrote: "If you have differing opinions, lay out the evidence, or it would be seen as defamation. I request that Mr Wang Leehom issue a public apology by 3pm today, or I would pursue legal action against yourself and your father for defamation."

Along with her post, Jinglei also uploaded a screengrab of a message sent from Leehom to her after her statements against him on Friday (Dec 17), requesting that she retract her accusations in return for one of Leehom's properties. 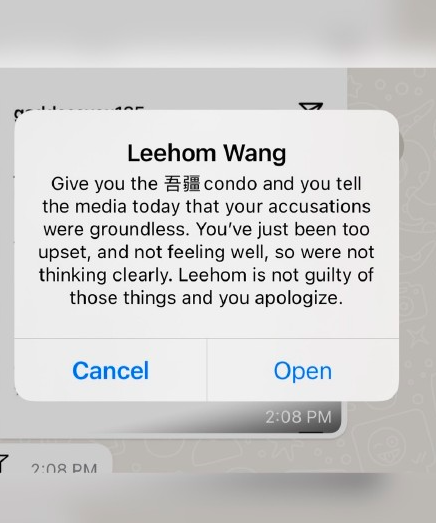