Peacemaker is the best superhero comedy series nobody asked for Peacemaker will surprise you – or maybe not. The mercurial James Gunn is running the show for this one and it’s a series that’s a lot smarter than what people will give it credit for.

Peacemaker picks up where James Gunn’s Suicide Squad left off and continues to showcase Gunn’s remarkable skill in taking obscure characters stuck in their time and turning their flaws into relatable human failings, celebrating their darkness and their humanity with equal aplomb.

And that killer soundtrack. Marvellous.

I suppose people were surprised that the anti-hero Peacemaker got a TV series of his own, but when you consider that they essentially resurrected him at the end of Suicide Squad, this outcome wasn’t beyond the realm of possibility.

Harley Quinn aside, of the many characters that remained at the end of the movie, John Cena’s “Douchey, bro-ey Captain America” had the most commercial potential. It’s John Cena after all. Gunn’s treatment for Peacemaker also had the most promise for an interesting backstory that didn’t involve too much doom and gloom i.e. your typical DC Universe story.

Peacemaker – aka Christopher Smith – was first introduced in the comics as someone who desires peace and was willing to fight for it. Cena’s Peacemaker goes one step further – stating that he doesn’t care how many men, women and children he has to kill just to achieve it. 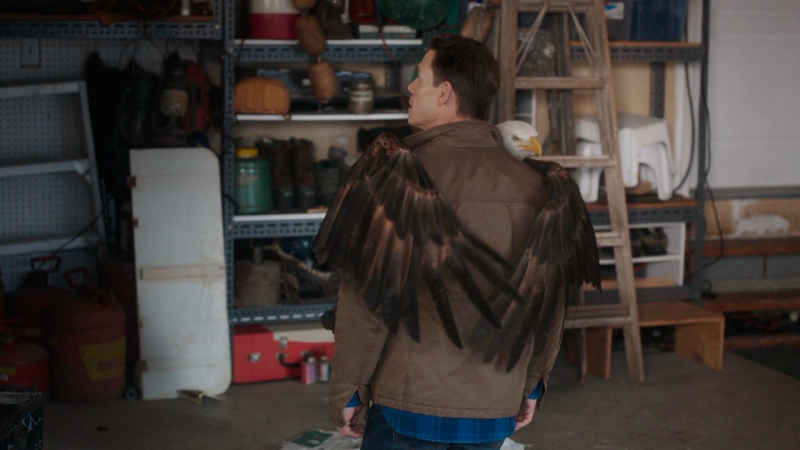 Peacemaker’s lack of irony of self-awareness is perfect in a show that’s perfectly aware of what it is and what it’s supposed to deliver. And Gunn’s majestically twisted world works because he pushes everything to the brink; so much so that you have to be daft to take anything remotely seriously.

Tone-wise, Peacemaker is perfectly on the nose; chef’s kiss, even. I think what makes Peacemaker, which sounds absolutely stupid on paper, work, is that every part is pitch-perfect. It’s as much the Kiss script as it is the casting.

Let’s face it. The only reason nobody talks about Peacemaker’s ridiculous costume is that we’re so used to John Cena the wrestler that Peacemaker simply looks like he’s been given a new gimmick – I mean, John Cena is the man’s stage name as well as his actual name.

He’s so at home in a garb that’s as tone-deaf as his persona, I would believe that’s how he talks in real life (to be clear, he doesn’t).

What makes the series tick is the memorable cast that Cena works with. Jennifer Holland and Steve Agee reprise their roles as Emilia Harcourt and John Economos, whom we last saw as operators from Task Force X’s mission in Corto Maltese but are seemingly reassigned to work with Peacemaker as Amanda Waller’s (Viola Davis) way of getting back at them for insubordination.

Harcourt and Economos play the stereotypical ice queen and BBFA (look it up in the EDMW forums if you don’t get the reference) with aplomb in their interactions with the socially-challenged and overaged jock.

Chukwudi Iwuji’s Clemson Murn takes up the Amanda Waller role for this mission. He’s established on the outset as someone who cannot be trusted, which adds just that itsy bit of tension to their relationship.

Rounding off the ragtag squad is new recruit Leota Adebayo (Danielle Brooks), the uncynical, too-eager-to please, noob who turns out to be far more important to the plot than she lets on. Adebayo represents the new generation: Perfectly comfortable with her girth, savvy with obscure internet facts, and incapable of straight talk.

Despite the seemingly polar opposite natures of Adebayo and Peacemaker, Adebayo is the only one on the team who ‘gets’ him and the two of them hit it off early on. 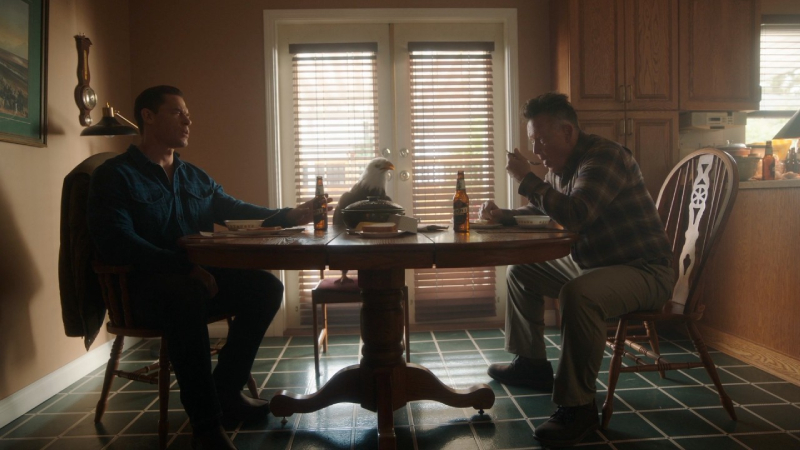 Much of the dudebro schtick is essentially a toxic masculinity bit, which has been put in place by his scumbag father, August Ransom ‘Auggie’ Smith (Robert Patrick). Auggie seems to be a brilliant inventor, having fabricated the tech that Peacemaker uses. He’s also menacing, bigoted, openly racist, and worst of all an impossible father to please. Almost Asian-level difficult.

Gunn has succeeded in creating an ensemble that you can feel emotionally invested in. Even Eagly the Eagle is a show-stealer.

Eagly is to Peacemaker what Grogu is to the Mandalorian; the proverbial doggy that dispenses hugs, and seems sentient enough to understand the brief of the show far better than the entire cast of the Eternals. With the exception of Kumail Nanjiani. 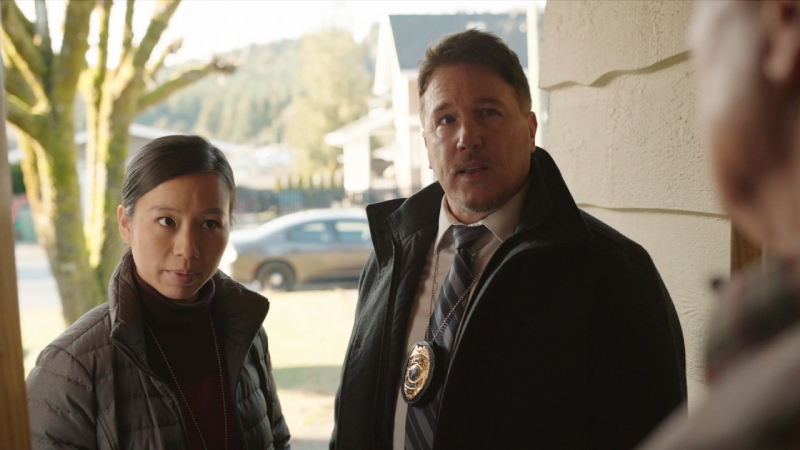 The perfectly self-aware series is also peppered with jokes that would typically get cancelled anywhere else: Be it Peacemaker viciously teasing Adebayo after she mistakenly presents her lesbian partner’s nude photos during a team meeting or when resident detectives Sophie Song (Annie Chang) and Larry Fitzgibbon (Lochlyn Munro) exchange race-related barbs with Auggie, then following it up with an ad hoc post mortem about whether a spoon is a more denigrating insult than a fork for a white man.

So it turns out that we can have a ‘woke’ show that’s also littered with crass old-school jokes. Who knew?

Even the mundane meta-comedy bits will evoke chuckles.

There’s a running gag where no one seems interested to tell Peacemaker what Project Butterfly is all about, and it’s hilarious because Peacemaker himself points out quite early on that Project Starfish in the Suicide Squad was about a Starfish, so he assumes that he has to fight a giant butterfly.

The eventual low-key payoff in episode three was totally worth the small investment. 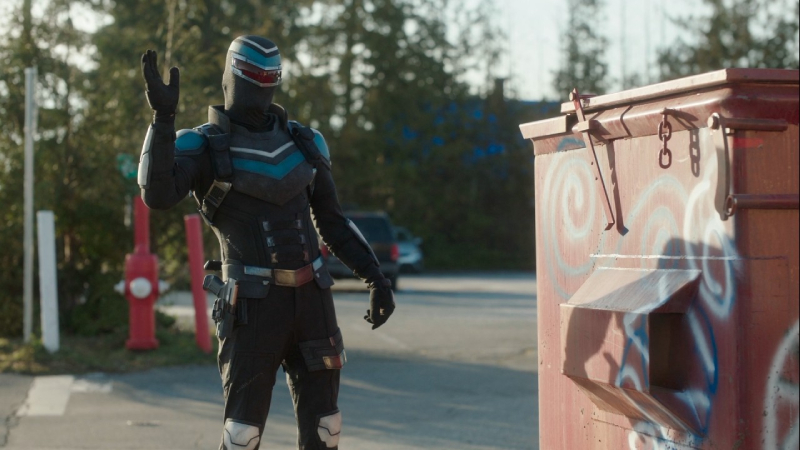 The supporting cast of heroes is potentially great as well. Vigilante (Freddie Stroma) has been a hoot with his stalker and sociopathic tendencies and we’ve only just had a taste of his comic flair. Judomaster (Nhut Le) appeared for less than five minutes and he’s already a certified show-stealer.

If you’re worried for him that his diminutive stature will be the butt of relentless height jokes, then don’t worry, he’s more than capable of dishing back zingers of his own with extra Cheetos (literally) in that delightfully condescending sneer of his. 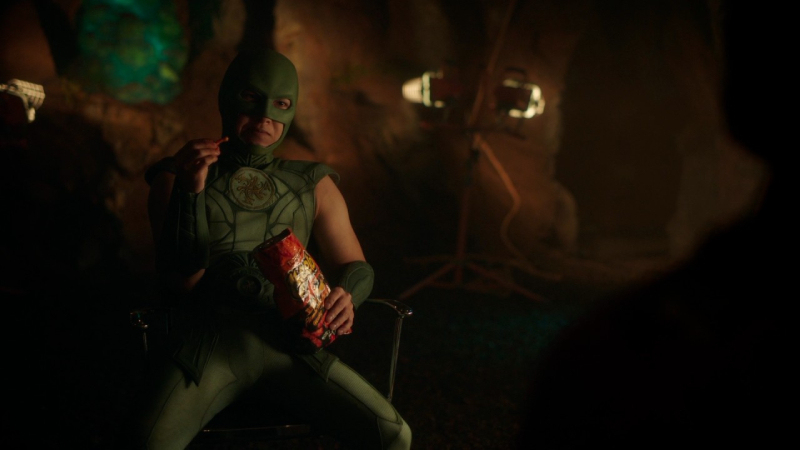 Peacemaker is pretty straightforward as a narrative and that’s not a bad thing – we get to learn about a new threat that earth has to deal with, we find out more about what makes this guy tick, and there will be a bombshell unbeknownst to most of the team that Waller will be drop on them later, and Eagly the eagle will get his heroic moment that everyone will be waiting for.

Predictable? I guess. I still want that, though.

It’s a good move on HBO’s part to drop the first three episodes in one sitting, as it gives us the perfect setup for the team’s dynamic while introducing just enough of the antagonists to get us pumped about the next episode. Peacemaker should be a surefire hit if it’s able to keep up this pace.

Peacemaker is for a mature audience and drops weekly on HBO Go.

READ MORE: The Suicide Squad's spin-off series Peacemaker hits the right spot in all its wackiness