Once upon a time on Channel 5, there was the reality TV singing competition Singapore Idol which spawned singers such as Taufik Batisah, Hady Mirza, Sezairi Sezali and Tabitha Nauser.

Although it's been quite some time since then, one netizen decided to create a throwback by posting memorable clips from a 2006 episode to TikTok.

The short video, uploaded on Monday (Jan 10), featured judge Ken Lim critiquing season two contestant Joakim Gomez, who was only 17 at that time.

In the video, Ken told Joakim's fans: "You guys are worshipping the wrong idol."

He then added to Joakim: "Basically, you're just moving and not singing. Week after week, we've been telling you to improve, but I think it's beyond hope. If we go on this way, I think it's gonna be a joke."

Ken, who has been the executive director of Hype Records since 1992, was known to be one of the more critical judges on the show with his no-holds-barred approach in giving feedback to the contestants.

Netizens have also compared him to American Idol judge Simon Cowell, who is also a tough nut to crack.

To give an idea of what Ken was referring to, the video included a snippet of Joakim's performance where he belted to Rob Thomas' Lonely No More.

The video quickly gained the attention of fellow TikTokers and chalked up more than 113,900 views in a day.

It even caught the eye of Joakim himself, now 33, who left a comment to sum up his experience as an Idol hopeful.

Despite his unwillingness to reminisce about his past, many netizens left encouraging comments for him, commending him for finding success as a radio presenter and host. 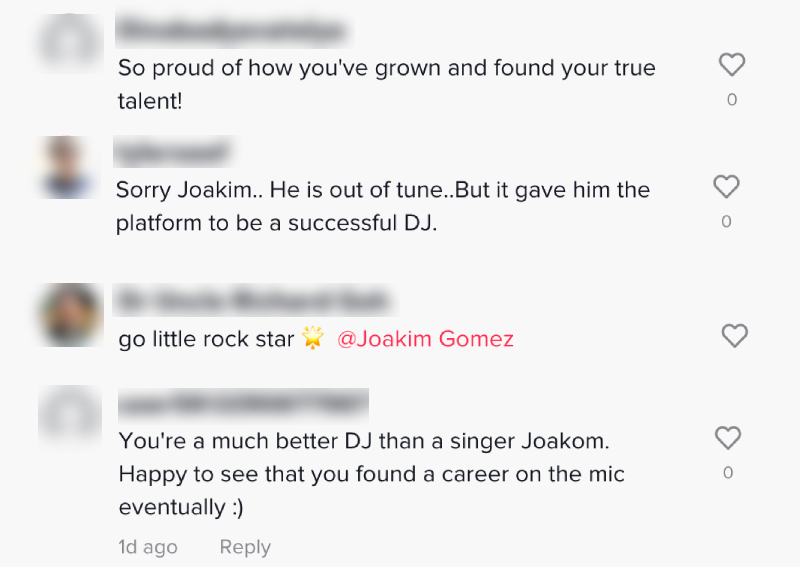 Nostalgia aside, it looks like all's well for Joakim, who now hosts The Shock Circuit on radio station 987FM with Sonia Chew.