If you thought 2021 marked the end of the Wang Leehom-Li Jinglei divorce saga, think again. Only this time, the tide appears to have turned — in Leehom's favour.

According to Taiwan media reports, the "whitewashing" of the Mandopop singer's alleged misdeeds in recent days was fuelled by a netizen who went online to refute points raised by Leehom's ex-wife.

The netizen, who claimed to have a "senior who works with Wang Leehom", stated that the topic of Leehom's divorce drama came up recently during a gathering with the senior and several schoolmates.

They clarified that the intention of the article wasn't to side with one party over the other but to offer a different viewpoint, and acknowledged that the narrative may be biased since the opinions are from someone from Leehom's camp. Indeed, most of the points raised are in defence of the disgraced star. 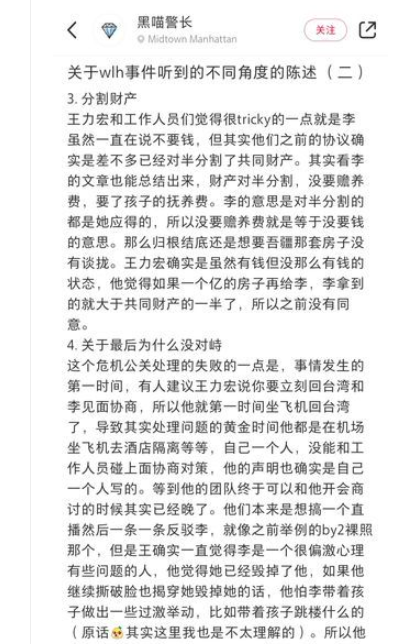 The first of the five points touched on Leehom's alleged cheating, seemingly referring to his reported dalliances with prostitutes in the past.

The netizen claimed it would have been tough for Leehom to meet anyone discreetly in his hotel room, as the singer's co-workers would usually occupy rooms next to his.

"And the co-workers have never helped Leehom make any such arrangements, so he would have had to do it himself, which would have made it more difficult."

While the netizen acknowledged that Leehom was "pretty open" and "playful" prior to settling down — which is "in accordance to what Jinglei has said" — Leehom's focus on his career and reputation meant it was unlikely he would do anything to tarnish his image after marriage, the netizen added.

As for evidence of his alleged affair with By2's Yumi, the netizen alleged that "there was never any evidence in the first place".

"Wlh (Leehom) searched through his messages and saw a conversation that was centred around work."

The conversation, said the netizen, was one in which Yumi appealed for Leehom's help to promote the group's new song. The supposed "nude photo" which Jinglei accused Yumi of sending was actually a profile photo she used, and one that's not of herself.

Another factor that supported the point that Leehom wasn't having an extra-marital affair, claimed the netizen, was that the purported evidence was not handed over during their divorce proceedings, even though it would have been beneficial for Jinglei to do so.

"If there was, she definitely would have gotten more of his assets. Was it because she didn't want to? It's because there really wasn't any evidence in the first place," the netizen claimed.

With regard to the division of assets and why the apartment was not handed over to Jinglei, the netizen added that it was because "Leehom may be rich, but he's not that rich. He felt that if he gave the condo unit over, it would tip the proportion of assets in her favour and so he wasn't willing to do so".

The netizen also alleged that Leehom had wanted to do a livestream to defend himself after Jinglei's initial accusations, "but he'd always felt that Jinglei has an extreme personality with psychological issues" and was afraid of what she might do to herself and their kids if he were to agitate her further.

Lastly, the netizen revealed that the reason Leehom failed to pick up her multiple phone calls — of which she'd posted the screengrab — was that he was "caught unawares". The netizen explained that Leehom usually made sure to record their phone conversations, but because she didn't call him using the software which allowed him to do so, Leehom was "unprepared and didn't pick up her calls".

The netizen also shared that according to the senior, Leehom is expected to take a "three- to five-year break from work".

The post by the unnamed netizen, published on Jan 4, has led to a wave of backlash against Jinglei and those who support her, media reports noted.

Just as actress Vivian Hsu became 'collateral damage' from Jinglei's accusations, this time, it is Jinglei's good friend, Taiwanese celebrity Patty Hou, who has been implicated.

According to reports, users who posted negative comments on Jinglei's account have had their comments deleted and accounts blocked. Disgruntled, they've now turned to Patty's social media accounts instead, bombarding her IG and Weibo accounts with angry comments.

Wrote one: "Gentle reminder, make friends carefully and stay away from poisonous snakes. Be careful that you may be the next victim."

Another questioned: "Can I please ask why your good friend deleted my comment and blocked me? Deleting comments that one doesn't want to hear, is that being real? I have evidence." 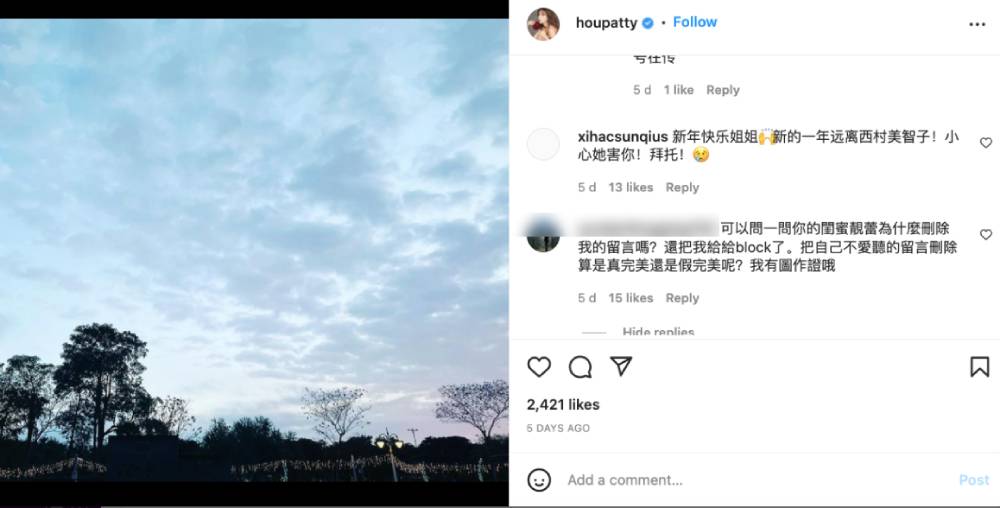 Netizens on the rampage also dug up alleged "intimate" photos of Jinglei posing with a 'man' during her birthday celebrations last year, accusing Jinglei of "inappropriate behaviour". The photo went viral on Weibo, reports added.

However, the furore died down after it was revealed that the 'man' is in fact Zhu Yufeng, daughter of veteran Taiwanese actress Tien Niu.

celebritiessingerDivorces, Separations and Annulmentsmarriagescandal
Share this article
This website is best viewed using the latest versions of web browsers.