Have Talu Wang and Malaysian singer Joey Chua broken up? Their passionate romance and public canoodling back in May surprised some of us but has the budding relationship between Taiwanese actor Talu Wang and Malaysian singer Joey Chua ended?

The two were spotted together at the Changchun Longjia International Airport on Christmas morning but separated when they saw their pictures being taken.

Later that evening, one of Joey's fanclubs issued a statement on Weibo claiming the 27-year-old is single.

"The company (Joey's talent management agency) confirmed that Joey Chua is currently single. She was indeed dating someone previously but they have parted ways on good terms," they wrote.

They added that there were factually incorrect media articles and her itinerary on Dec 25 was purely for work.

"Joey will focus on her career from now onwards."

The Weibo post has since been removed and both Joey and Talu have not released any comments. 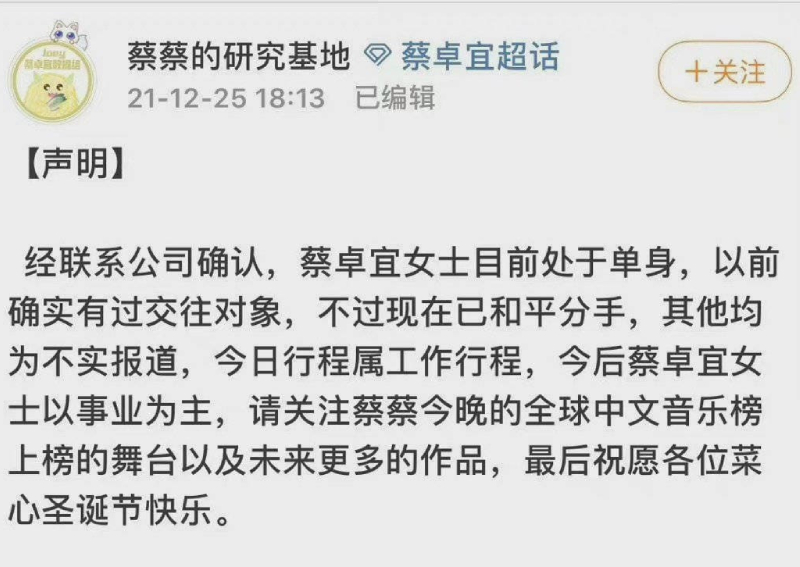 While they didn't address the issue directly, they said they are the only channel of communication between Joey's management agency and her supporters, and that the public should only recognise statements from two sources: the agency and the official fan club.

Talu, 30, met Joey earlier this year when she took part in A Journey For Love, a Chinese reality show he hosted for divorced female celebrities to find love again.

Joey, who divorced her Malaysian husband Ivan Soh in 2019 after three years of marriage, did not end up with anyone when the show ended in April. In a note Wang wrote to her at the end of the series, he called her "my only little sister" and said he would support her if she couldn't find someone.

In May, the two were seen behaving intimately in public, with Talu pulling down Joey's face mask and kissing her passionately.

In July, both went sightseeing in Beijing and visited an onsen together. Joey also sat on Talu's lap while they hugged, kissed and chatted.