In a statement posted on their Facebook page at around 9am today, Mediacorp radio station Gold 905 announced that Muhammad Shalehan will also be awarded the full contest prize of $10,000.

"Hi everyone, thank you for all your feedback and posts. We have reached out to Mr Shalehan again to convey that we are deeply sorry. Since Tony Hadley has said that Mr Shalehan said his name correctly, who are we to disagree? The full prize of $10,000 cash and shopping spree will also be awarded to Mr Shalehan. We value all our listeners and your continued support," the post reads.

Muhammad Shalehan posted on Facebook that Gold 905 has offered him $5,000 as a token of appreciation, but as of writing, it is not known if he accepted it.

In a multicultural society like Singapore, it's not unheard of to have different accents, which in turn, affects one's pronunciation.

But what happens when your accent costs you $10,000? Well, Facebook user Muhammad Shalehan called out local radio station Gold 905 for passing him over as the winner of their competition Celebrity Name Drop earlier this month.

Gold 905 declared that he had mispronounced the last name of British singer Tony Hadley because he said "Head-ley" while the winner pronounced it as "Had-ley". 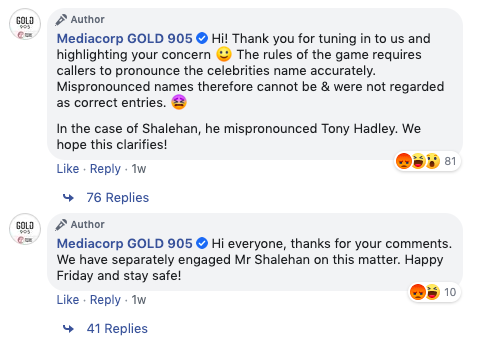 In this competition, listeners tune in to Gold 905 on weekdays and call when they hear the cue to do so. They'll listen to a clip containing various celebrities' voices, and have to accurately guess their identity in the right order to win $10,000.

Shalehan took to Facebook to voice his displeasure at the results as he thought it was unfairly judged, claiming that an overwhelming majority of the community didn't find any mistake in his pronunciation. Shalehan even emailed Tony himself and received a video response where the 59-year-old singer stated that his pronunciation was accurate.

Tony said in the video: "I've listened back to the tape and as far as I'm concerned, you pronounced my name correctly, so you should be entitled to whatever the prize was."

Shalehan also attached audio recordings of his and the winner's pronunciation of American singers Madonna and Belinda Carlisle, juxtaposed with a clip of what is supposed to be the right pronunciation.

Netizens have voiced their support for Shalehan as well and pointed out that the winner's pronunciation of "Carlisle" wasn't perfect either. 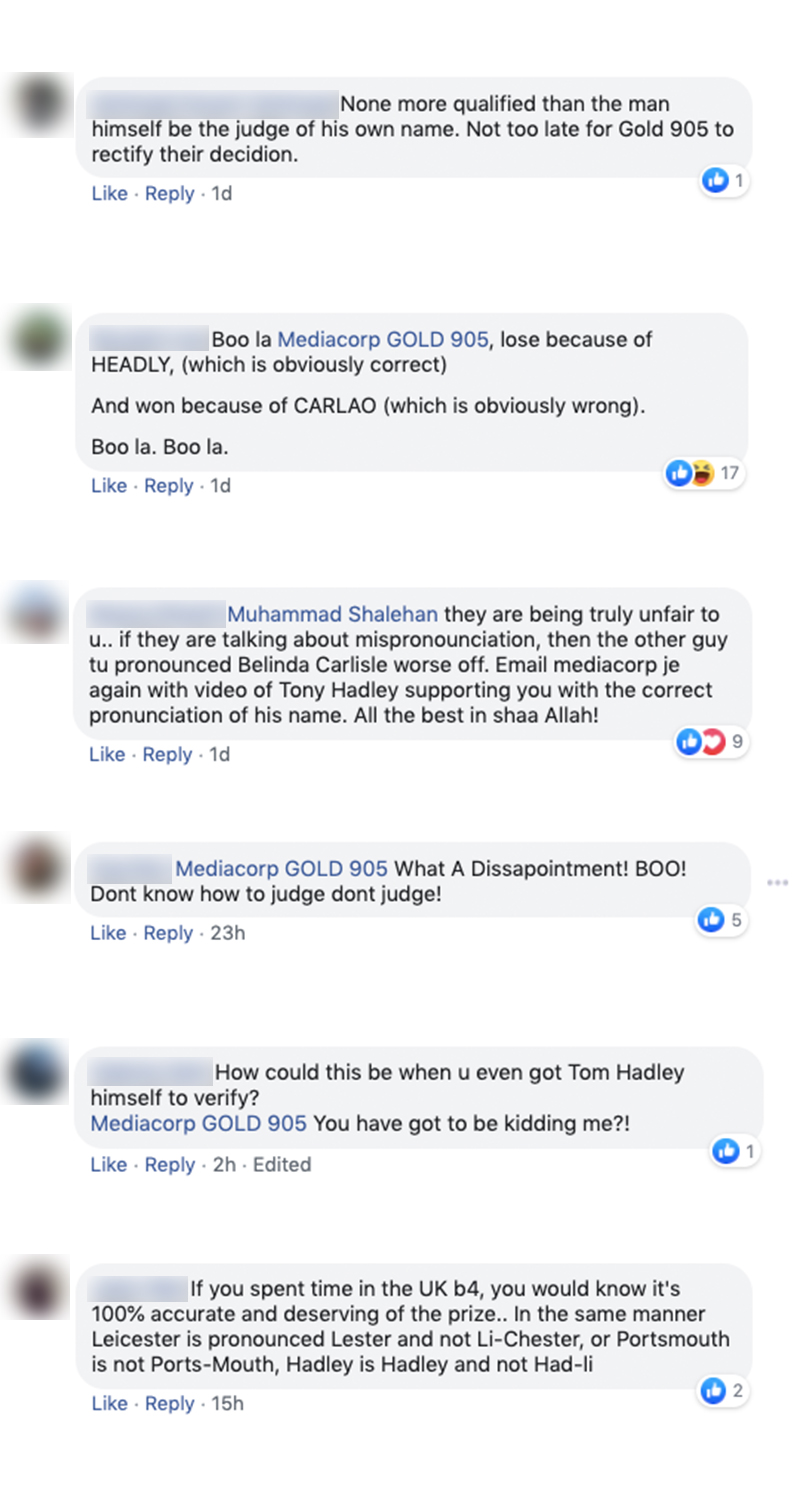 In response to AsiaOne's queries, Gold 905 directed us to their statement on Facebook where they reiterated that "a caller will be entitled to win the prize if his/her answer is fully correct". They added: "A fully correct answer includes accurate identification of the celebrities’ names in the correct sequence, and the correct pronunciation of the celebrities’ names in the way the celebrity will pronounce it himself/herself."

As such, they judged that Shalehan's pronunciation "did not meet the criteria as stipulated in the rules of the contest" and maintained that "rule was applied consistently across all the entries".

"We would like to assure listeners that all entries have been reviewed fairly and objectively by our judges, and our decision remains final."

However, "heartened by the passion" and "touched by [Shalehan's] commitment and resourcefulness", they're making an exception as a "gesture of goodwill" and have reached out to Shalehan with "a token of appreciation for his exceptional commitment to the contest and loyal support for Gold 905".