It’s been a while since the cafe opened, with different themes set up across various periods, and the time has come for the highly anticipated Genshin Impact theme for the HoYo FEST at Aniplus Cafe in Singapore to receive guests.

Alas, both dine-in and takeaway slots to eat at this cafe are already fully booked, and all within hours when the slots were made available. However, you can still check out our guide to book a slot here and continue to try your luck to see if someone has released their booking slot. The Genshin Impact theme for the HoYo FEST starts on Dec 3, and ends on Dec 14. 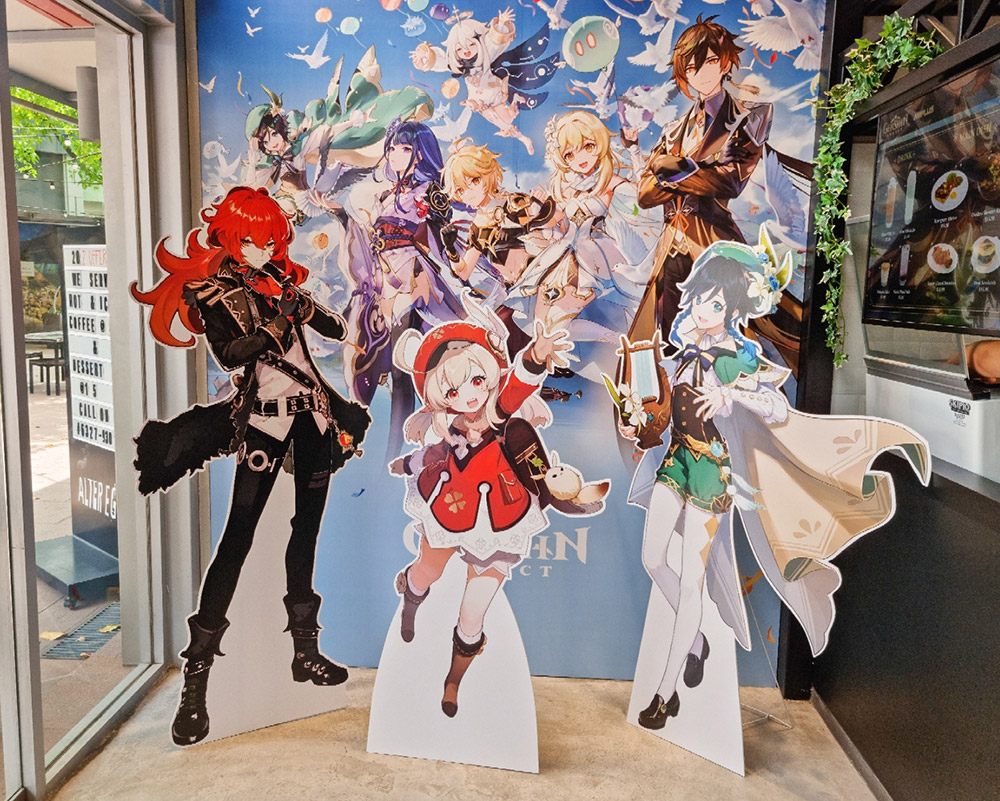 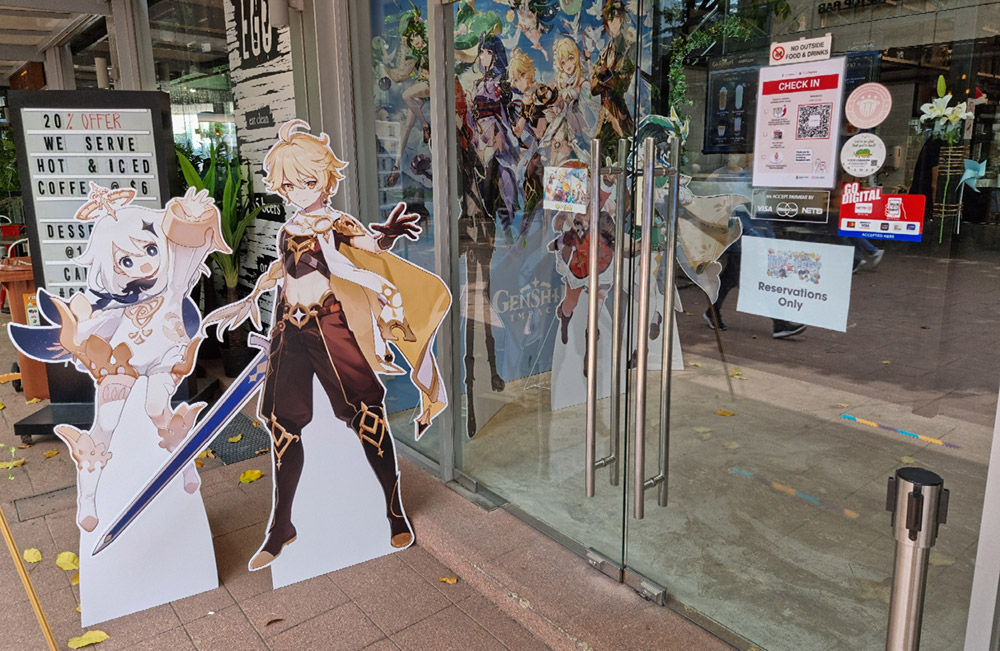 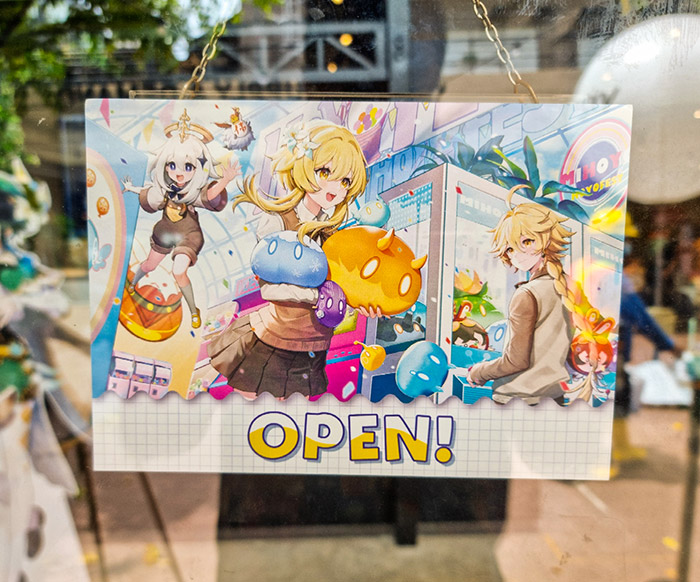 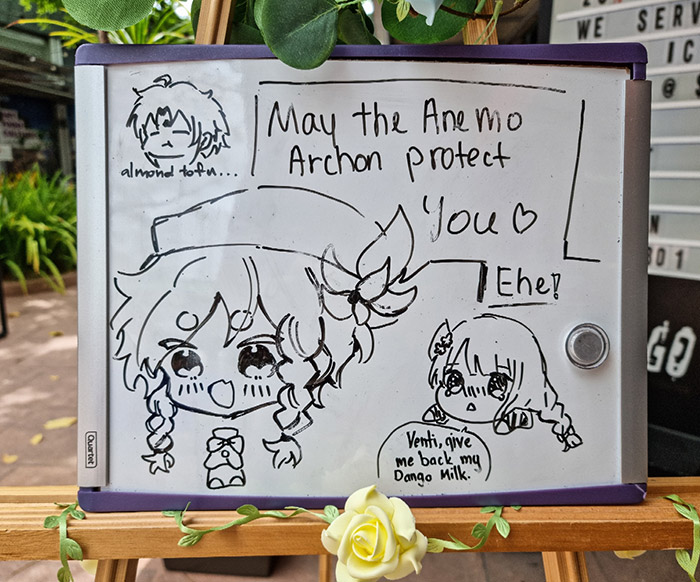 Arriving at the place, visitors will be greeted by lifesize posters of some characters from the popular RPG game, Genshin Impact.  You can also see Aether and Paimon as you enter the door, as well as some live sketches and other Genshin artwork as well. After entering, the first thing you will see is a photo-taking area where there are photo opportunities with Diluc, Venti and Klee standees, with the artwork of more photo characters as the backdrop.

Entering the cafe, you can see the place is decked out with Genshin themed art everywhere, which is likely the main draw for fans. The most impressive art there would be on the main pillar near the center of the cafe, where there is a back-lit canvas featuring some of the latest characters from the Inazuma region. Fans will appreciate several digital galleries of high resolution artworks and voice artist announcements. 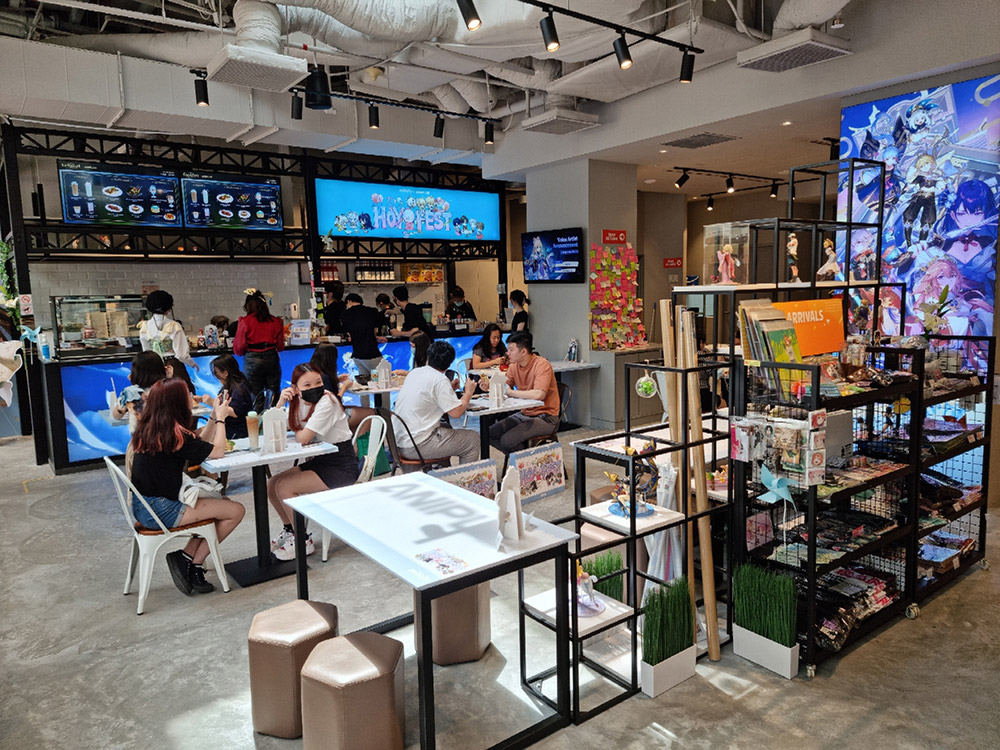 A curated list of relaxing background music from the game was played at the cafe to brighten up the ambience. Soundtracks such as the Liyue Harbor theme and Another Hopeful Tomorrow by Genshin Impact’s music composer, Yu-Peng Chen, can be heard playing in the cafe’s background, with the volume tuned just right, as it was loud enough to be heard, yet it doesn’t overpower the conversations you have with your friends eating with you. 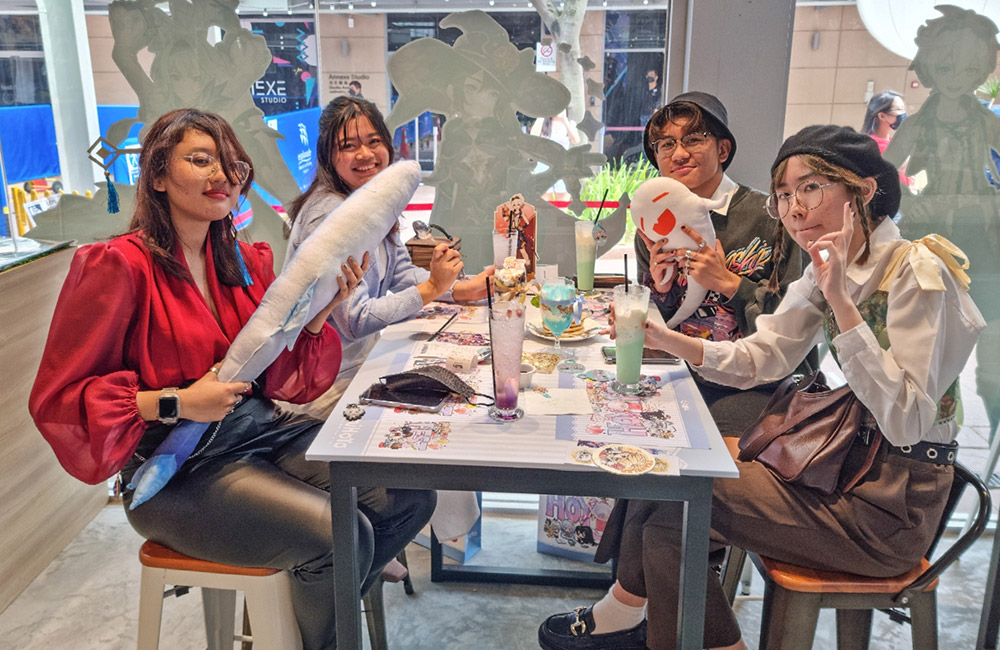 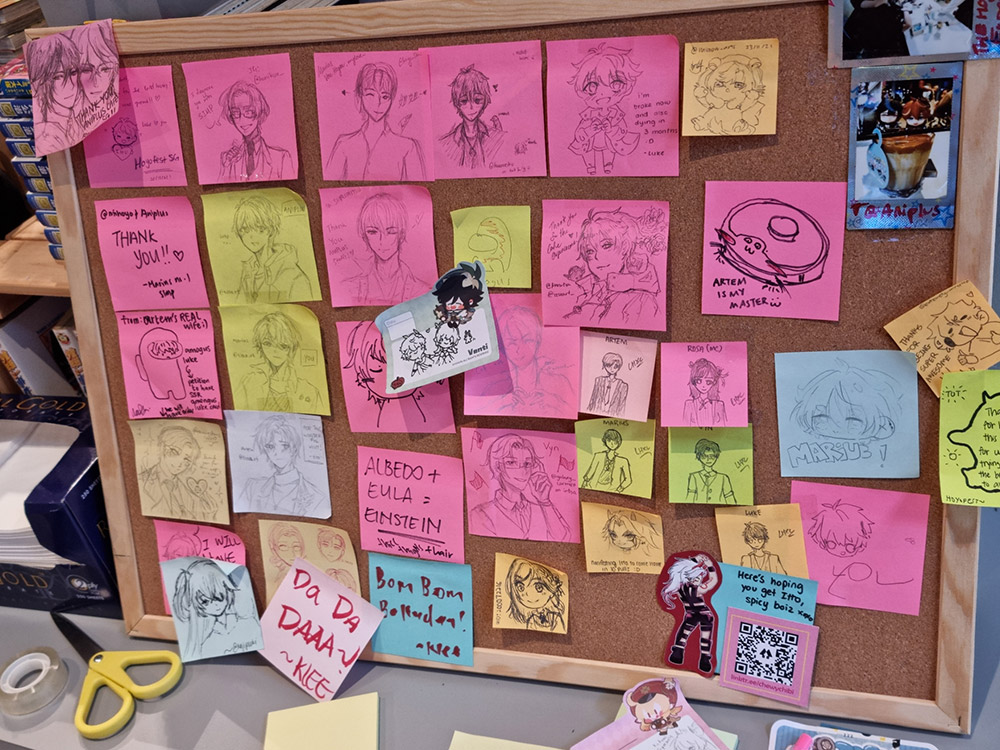 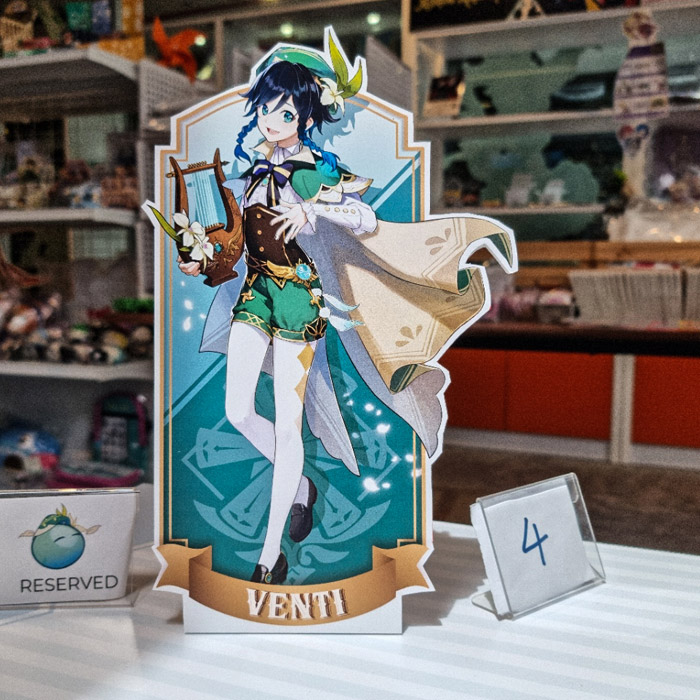 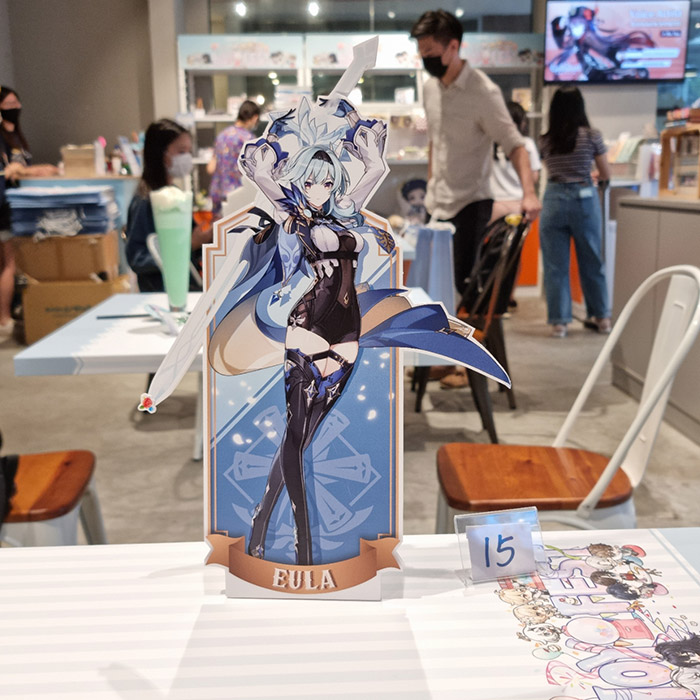 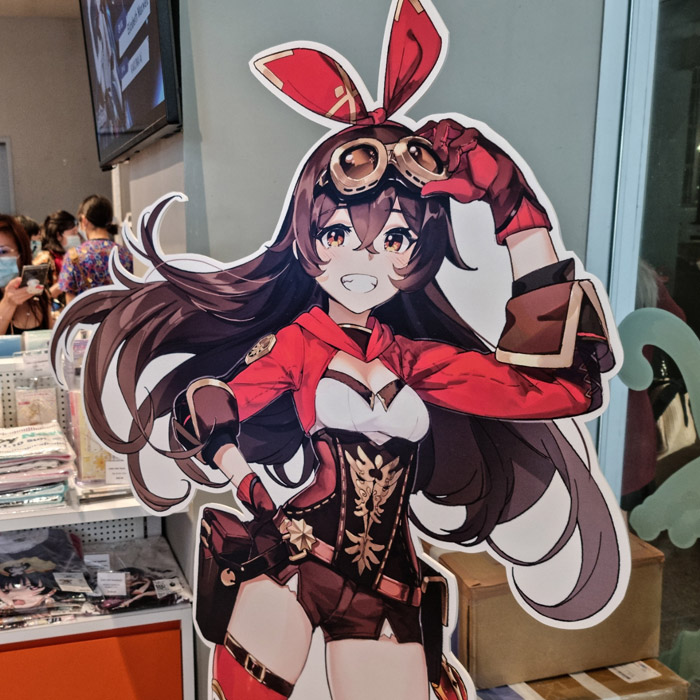 There is also a character standee on each table, which would be useful to accompany any lone diners eating at the cafe. The energy from the cafe patrons was very good, as you can see some of the customers wore Genshin themed outfits and accessories.

One can also grab a post-it and sketch a Genshin character to put on the notice board while waiting for your food. We spotted some interesting art pieces there too. It was also heartwarming to know that you are eating with fellow gamers of the game. It was a nice sight to see tables of 4 and 5 people eating there, as the pandemic restrictions had finally relaxed.

The Genshin themed menu for HoYo FEST was designed to resemble the food featured in the game. The main menu items such as Mora Meat, Chicken Skewers Rice Bowl, Emergency Food, and Tea Break pancakes look very close to the in-game version of the food. For the dessert, it was surprising that Xiao’s favourite food, the Almond Tofu, which was a fan favourite, and pretty easy to make, was not on the menu.

However, the Sugar Coated Slime and Tea Break Pancake are still great menu items, which were accurate (and more palatable) food renditions for the game. If you are curious, the Slime items are actually made using jelly and mochi, and are perfectly safe to eat. 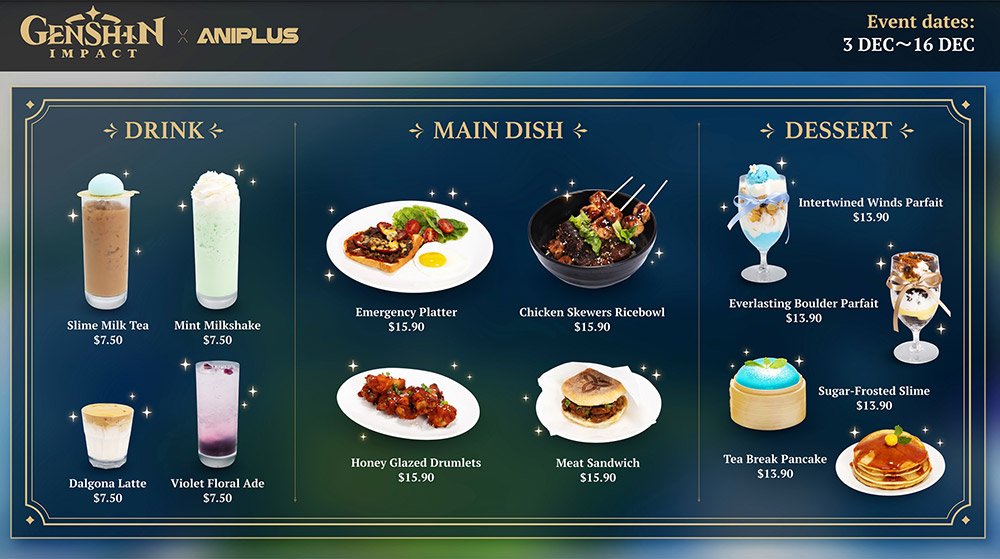 The Mora Meat was very tasty, it has a resemblance to the traditional Chinese Rougamo, but westernised. It uses chicken grilled with BBQ sauce instead of pulled pork, as the cafe does not use pork or lard in their kitchen. Attention to detail to keep this food item in theme was also there, as there is a mora symbol stamped with BBQ sauce on the bun, just like how it looks in the game.

For the Emergency Food, it was inspired by a combination of two dishes from the game, the Fisherman’s toast and Teyvat fried eggs. The dish was the most visually appealing food item on the menu as it has the most splashes of colours on it.

When the dish arrived, it was pepperoni pizza toast with a fried egg, with a side of salad. To make the dish even more in theme, they could have sprinkled some dried italian herbs on it, just like the game, but that’s a small detail. Tastewise, the dish was alright, especially it is hard to go wrong with pizza toast.

However, while the toast was thick and satisfying, the pepperoni slices felt pretty thin. Thus, it felt more like a snack instead of a full main meal. If you need something meatier and filling, one can try the Chicken Skewers Rice Bowl or Mora Meat instead.

Drinks-wise, the Dalgona latte and Slime Milk tea tasted light, but it could be due to the ice melted as photos were taken of the food. Interestingly, the dessert was served before the mains, and it might be a good idea to request with the cafe if they can serve the dessert after the mains. 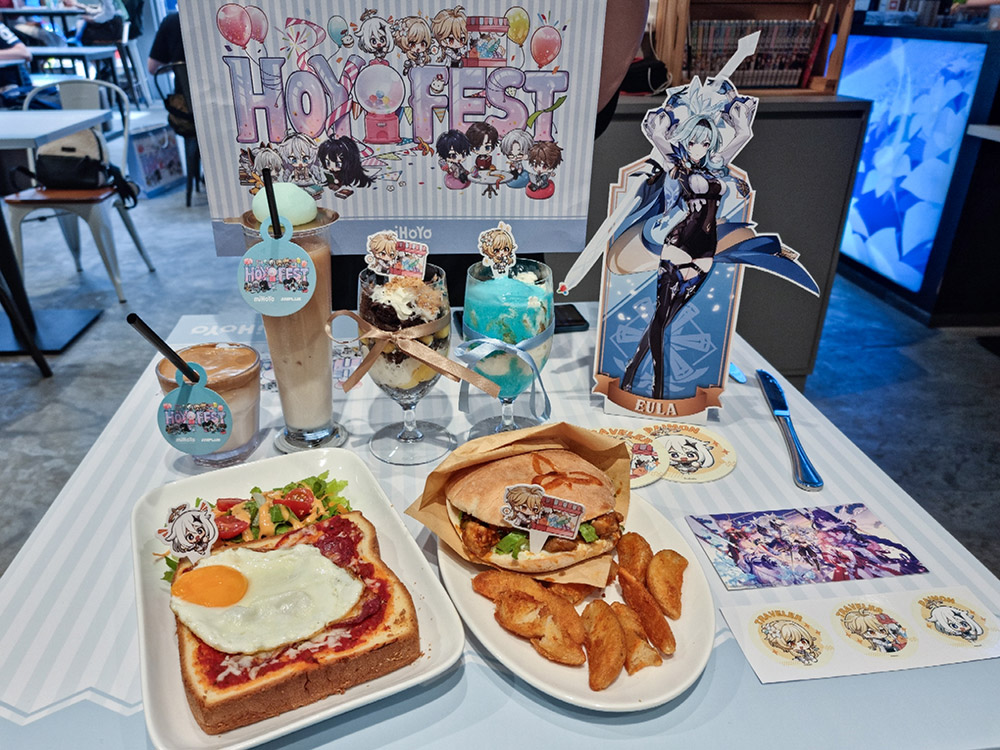 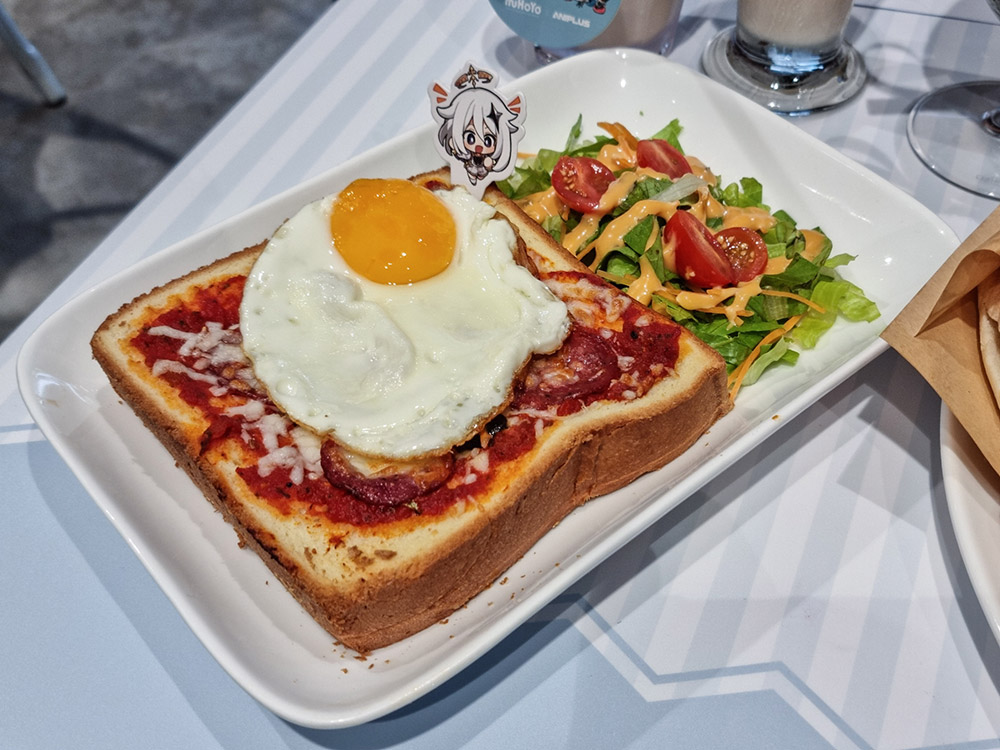 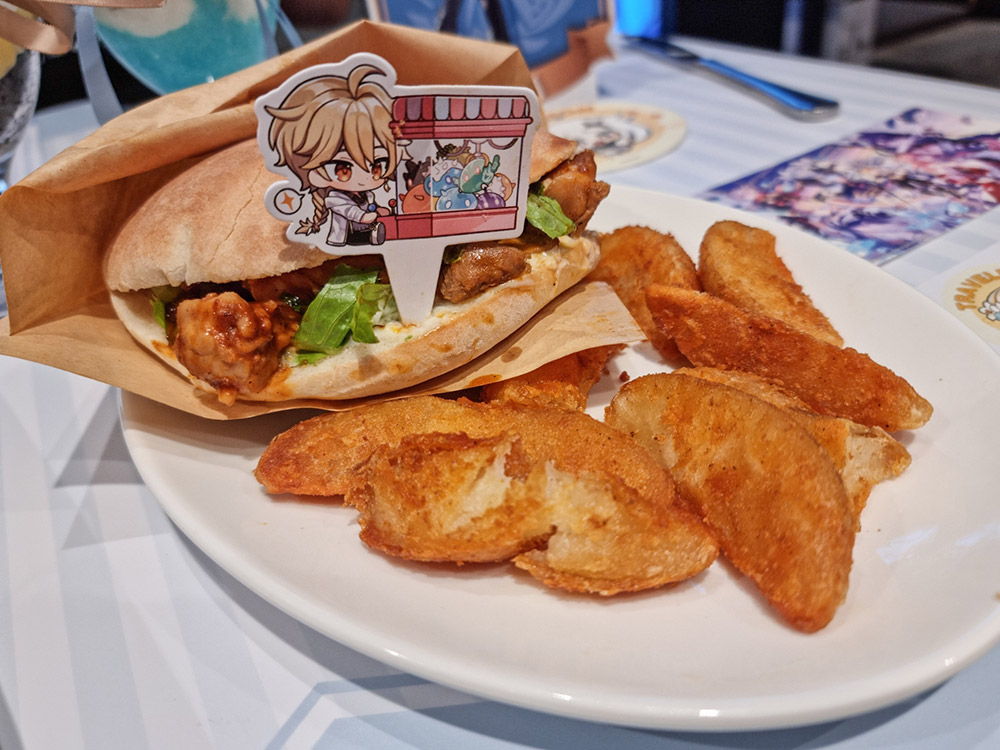 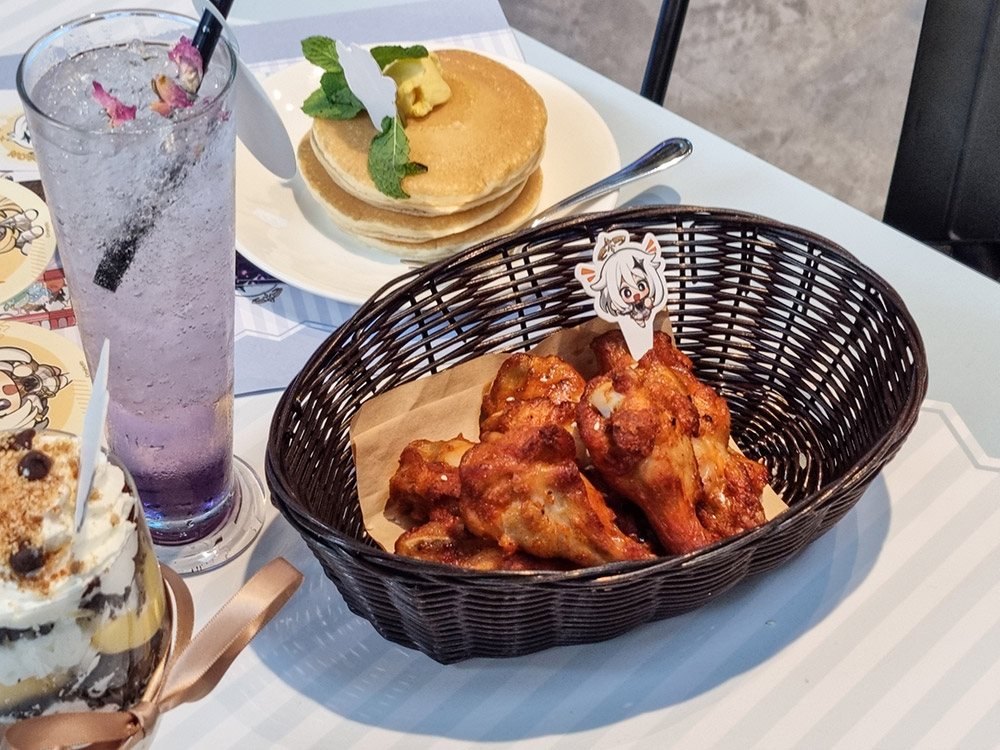 The Everlasting Boulder Parfait is more of a chocolate-based dessert, topped with cookie crumbles, custard, and a brownie at the bottom. With its rocky and brown look and feel, with the yellow hues, the look and feel of the desert resonates the Geo theme well.

The desert didn’t disappoint, and was actually pretty good too. The Anemo themed Intertwined Winds Parfait is something recommended. This parfait has pineapple biscuits and cornflakes in it, giving the dessert a very local flavour with a nice crunch.

But as all fans know, the highlight of the HoYo FEST is not the food but the sale of the licensed Genshin merchandise. While there was feedback that there was not enough merchandise for sale for the Honkai Impact 3 and Tears of Themis version of the cafe, this was not the case for Genshin Impact. 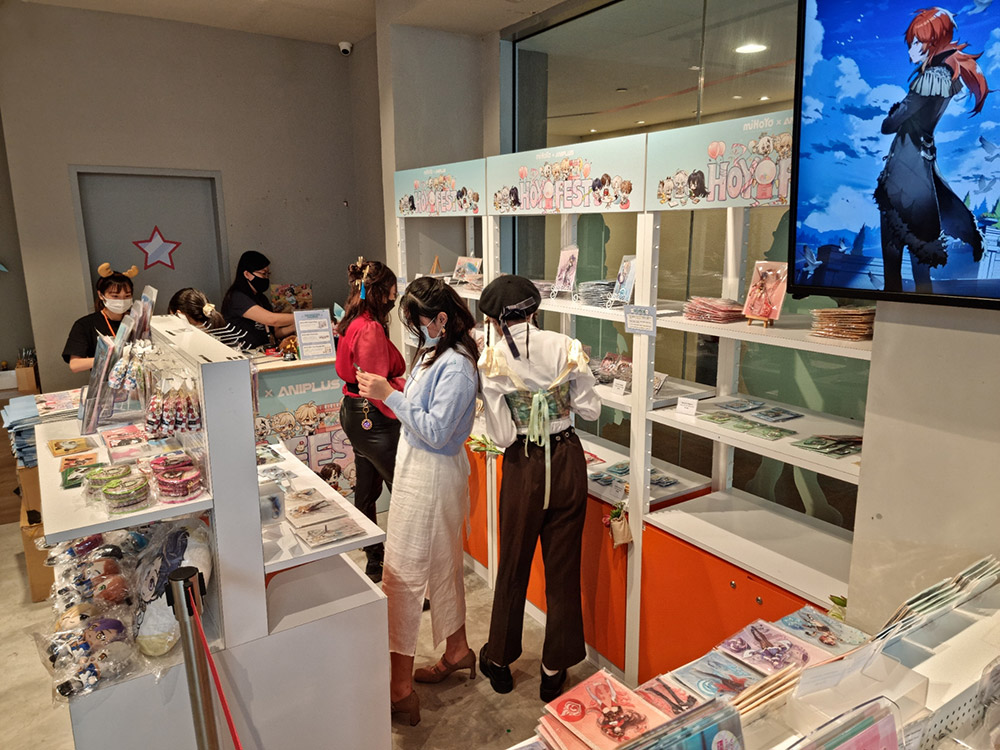 At the time of the visit from 2pm to 3pm on a weekend, there was an ample supply of the HoYo FEST event-exclusive standee, Genshin character acrylic standees and badges there. 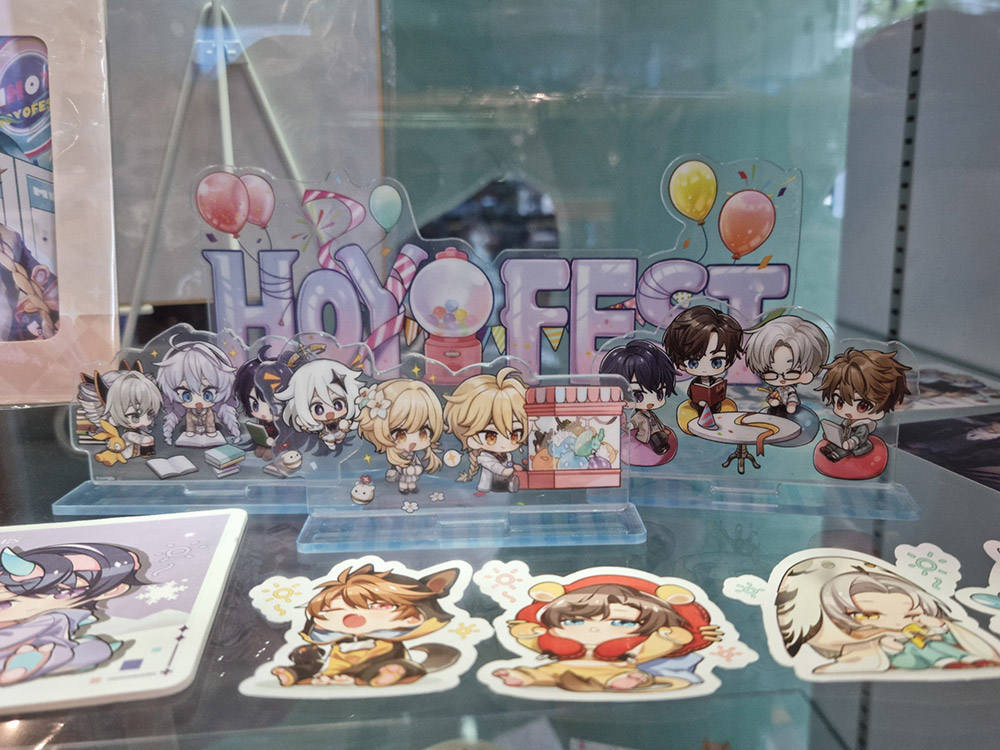 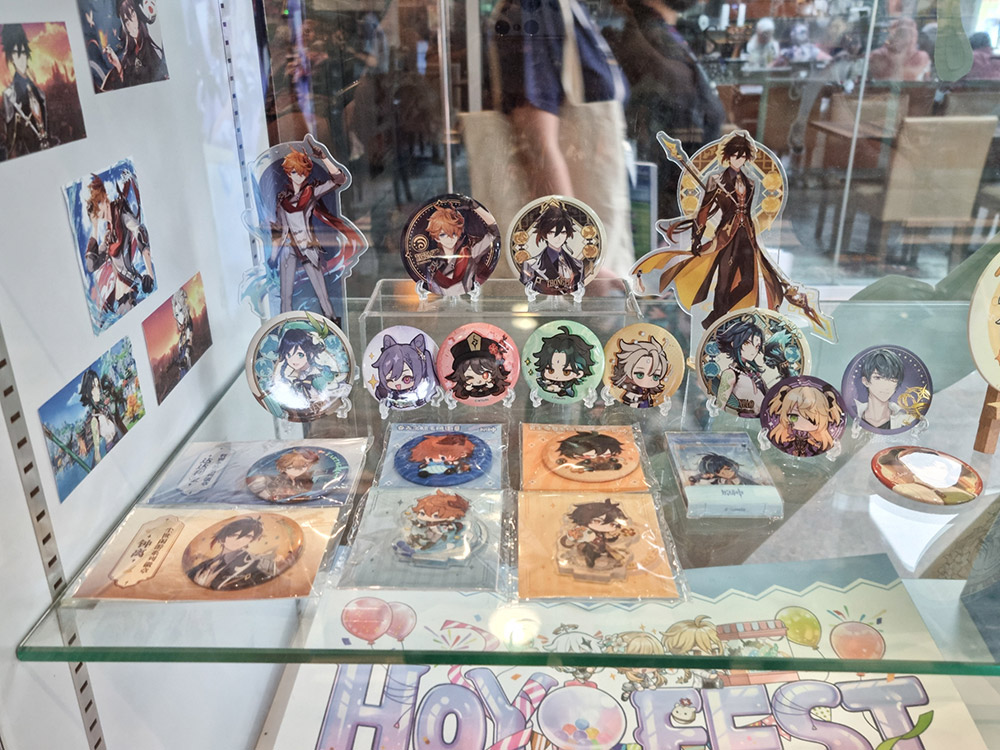 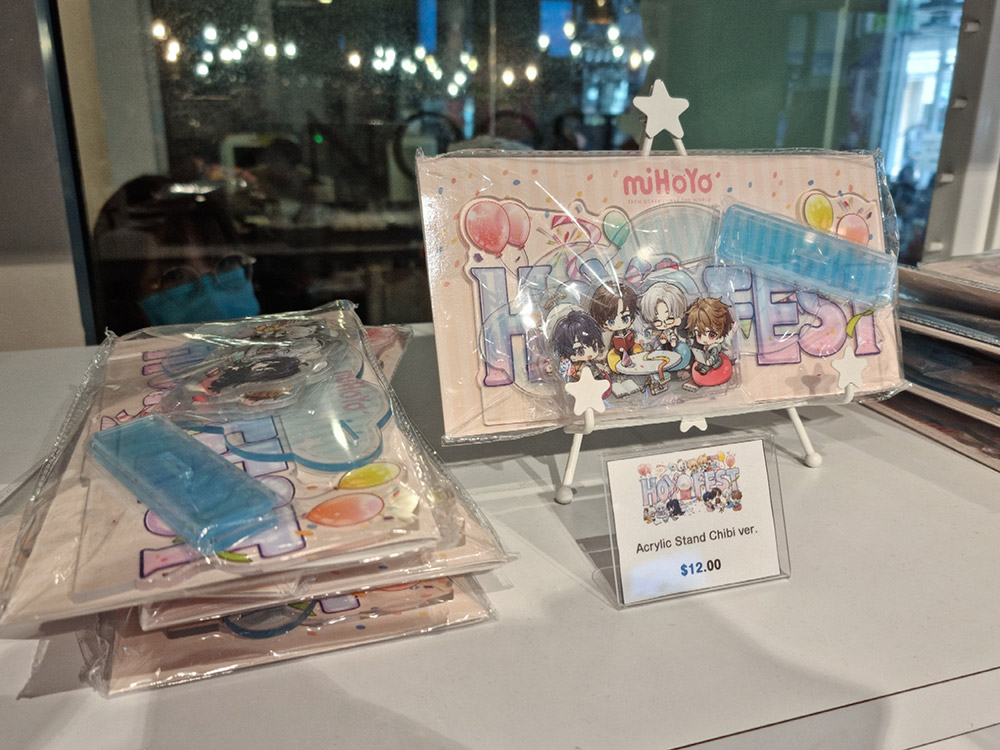 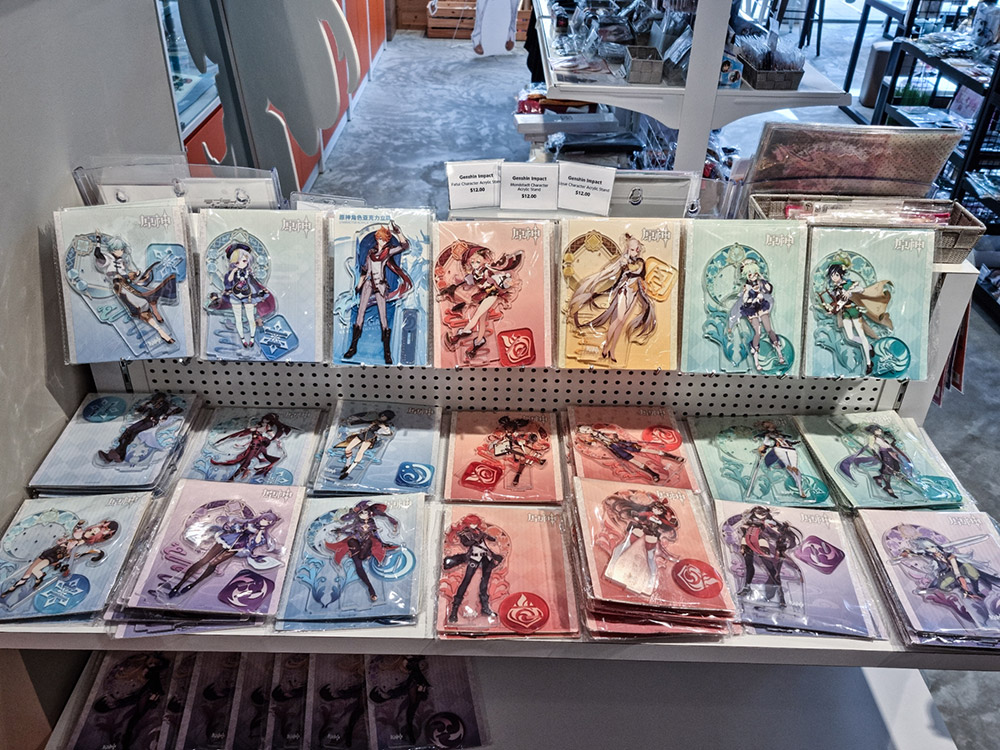 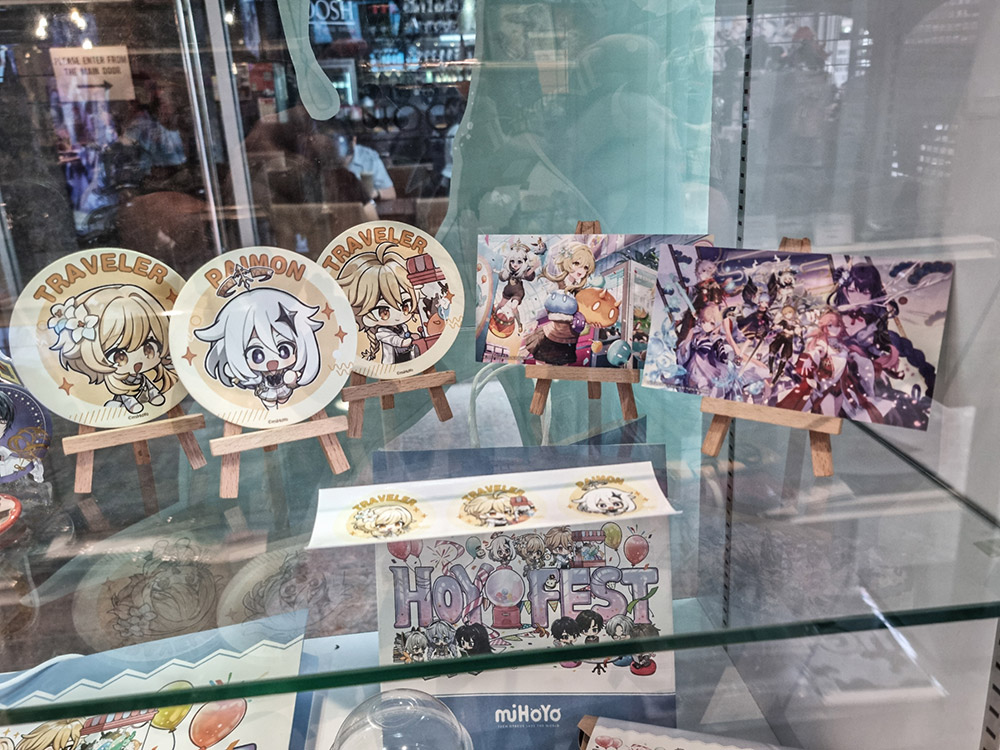 Also, customers who order food for $14 and above will be rewarded with a set of postcards, stickers and a coaster. There are actually 3 different designs of the coasters, which might encourage multiple visits to the cafe if fans are hardcore enough to try to collect all three.

Alas, some merchandise, such as the shikishis (art boards) were sold out already, but one can still preorder them. One fun thing to note here is that some of the staff at the cafe actually play Genshin too, and had signboards with messages with fun puns related to the game. For example, Zhongli’s iconic catchphrase for his Ultimate move was rewritten to “I will have a Pre-Order!” to inform customers that they can preorder some of the sold out event exclusive merch. 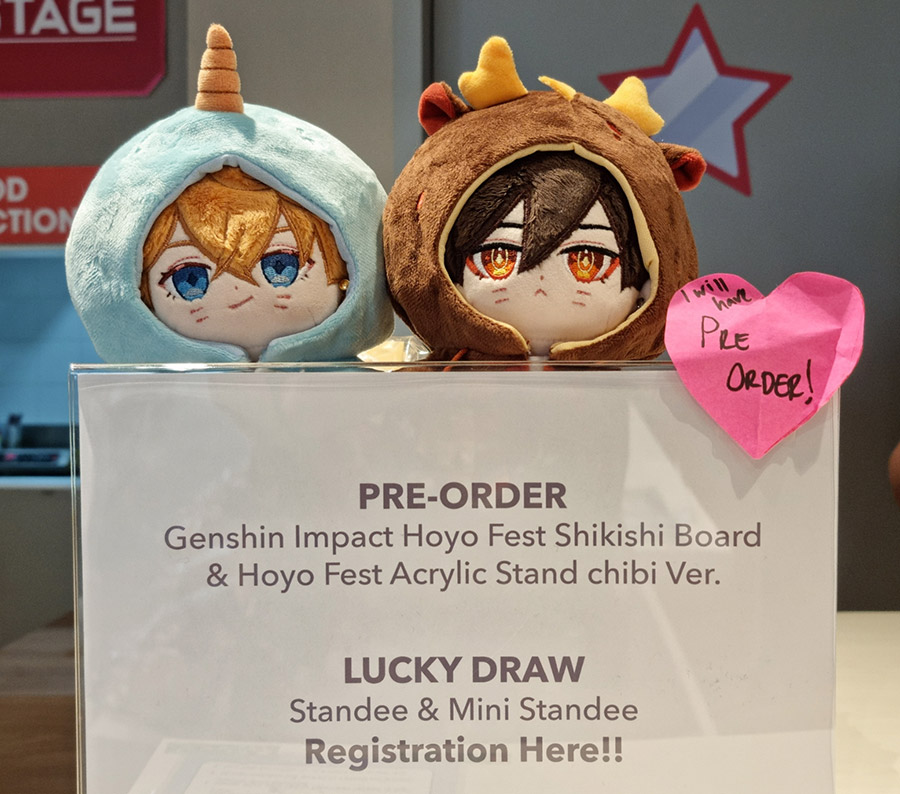 All in all, fans of Genshin Impact are very fortunate to have such an awesome themed cafe to hang out, eat and purchase merchandise with their gaming buddies. Hopefully, this event will return again next year, on a bigger scale, especially since there is proven interest from the Genshin fanbase here in Singapore, and the game features lots of different food to replicate in real life.

Cafes and BakeriesFestivals/CelebrationsFood and Beverage sector
Share this article
This website is best viewed using the latest versions of web browsers.