When it's not a space for scalpers to hawk their overpriced wares, Carousell is a great place to get anything you need — brand new or pre-loved used — at a good price.

The online marketplace is also where you can get a penny for your thoughts, according to one seller. Or rather, $5 for his second opinion.

Samuel Xie, who goes by the username ruykn.xu on Carousell, is offering a consultation service like no other on the platform.

The description of his service is simple: get in touch with him to ask a question on any topic and it’ll be answered for the price of $5. He’s an "unbiased source" too, so he can probably settle any argument that needs an outside opinion. 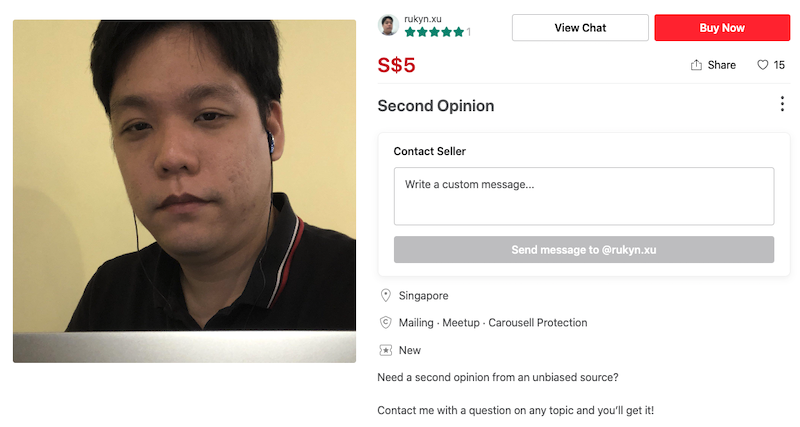 Speaking to AsiaOne, the 38-year-old salesman in the construction sector stated that he made the listing over a year back on one of the rare days that he had been resting at home when he’s not doing freelance research jobs or teaching music.

“Honestly, there has not been any requests on this avenue since then,” Xie admitted.

But that situation has changed, apparently. It was on Tuesday (Oct 27) that his Carousell listing caught the attention of many when a Facebook user shared a screengrab of his service.

Since the Facebook post, Xie has been receiving some enquiries on his services, but nothing has been firmed just yet. He currently holds a five-star rating on his account, but that positive feedback is likely from his other sold items, including a crystal punch bowl set, a baby car seat and a memory storage stick.

As to why he thinks that he could be of help to strangers, Xie feels that people are comfortable speaking to him as he can be tight-lipped when needed and keep their secrets safe.

“For issues, I’m sort of a sounding board among my friends, so they come to me when they have [to make] life decisions, like education, housing or relationships or children, investments, insurance and such,” he explained.

“Sometimes people come to me for opinions on simpler things like what computer to get or what song to sing for their wedding.”

Though he doesn’t want to put a price on his perspectives, he feels that the $5 transaction is just a token fee.

“As to the $5, it’s more of a bar to get people who seriously want an opinion,” Xie said.

“I view it as more of a small thank you if you think [my opinion] was helpful.”