SINGAPORE - If children can learn only one language other than their native one, it should be coding because "coding is a global language", said Apple chief executive officer Tim Cook.

Mr Cook, who was on his first trip to Singapore since taking over the helm at the tech giant in 2011, also met iOS developers and secondary school students apart from calling on Prime Minister Lee Hsien Loong.

This was no coincidence.

Growing the Apple developer ecosystem is a key agenda of Mr Cook's two-day visit to Singapore, and he wanted to reach out to a potential army of coders while they are still in school.

During The Straits Times' 20-minute interview with him on Wednesday (Dec 11), he talked about Apple opening a third store in Singapore and about helping students and adults come of age in the digital economy.

He likened learning coding to speaking a global language and being equipped for jobs of the future. "Even the most spoken languages are regional," he said, referring to common languages such as English and Mandarin.

Although coding will not establish new frontiers for the human race, it provides an opportunity for creative problem-solving and, as such, should be injected into Math, History or English classes, he said.

For instance, he watched how children used the iPad and augmented reality tools to learn about plastic pollution during his visit to Apple's Orchard Road retail store earlier on Wednesday. He said it is a testament to the potential coding provides.

"If we can visualise a greener future, we can make it real," he wrote in his Twitter post about the event.

Mr Cook also visited the Singapore School of Science and Technology to meet with some 30 secondary school students who have graduated from Apple's Swift Accelerator coding programme. 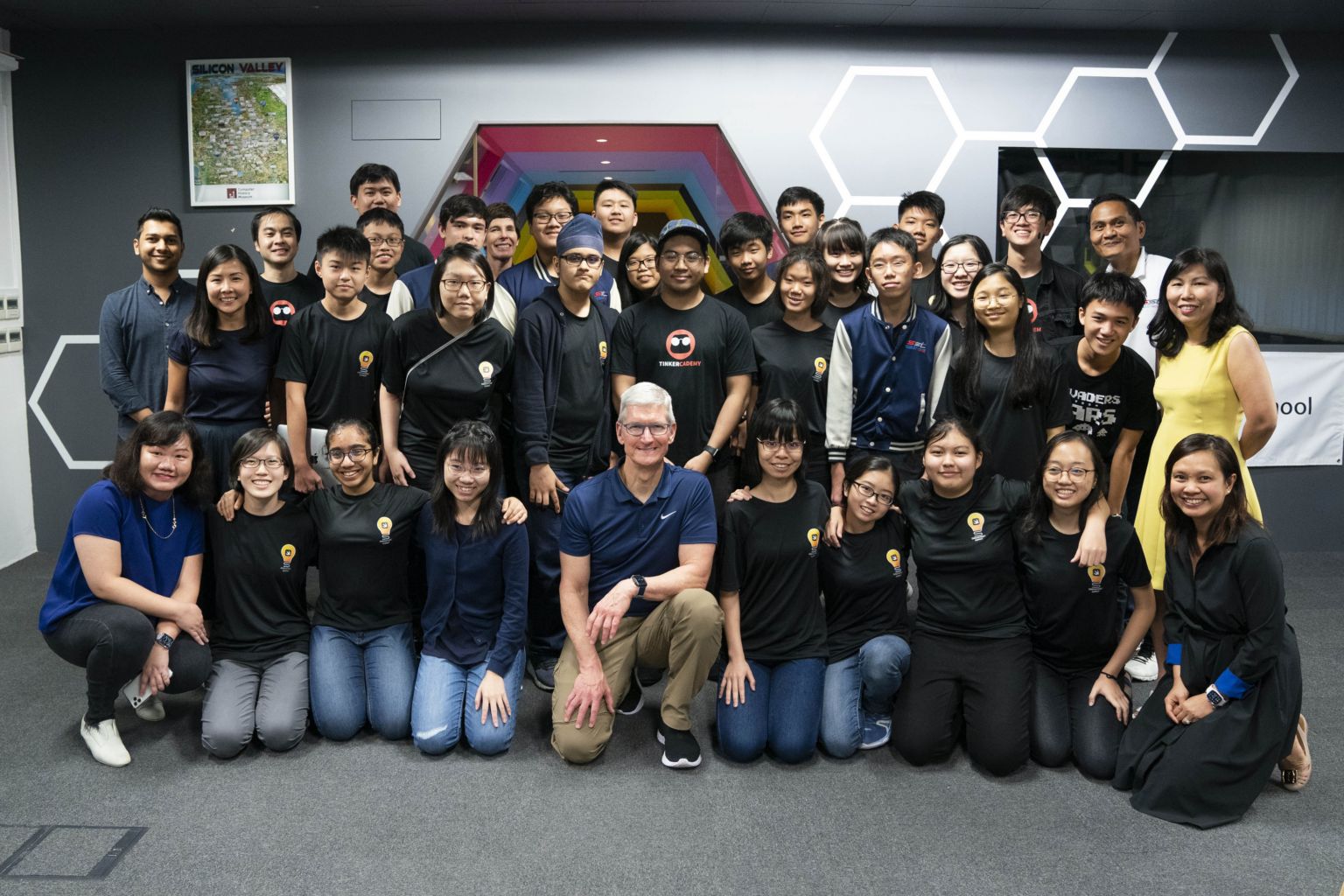 Swift Accelerator has been running in Singapore since January 2018, with a total 100 graduates from 17 secondary schools having gone through over 180 hours of coding lessons to date.

Among the graduates are Faith Lim, 13, from Nanyang Girls' High School and Kim Hyeong Hu, 15, from Admiralty Secondary School who have created a quiz game app called Quizercise to make exercising more fun.

Mr Cook also told The Straits Times that the tech firm "could use a third (retail) store" in Singapore as the Orchard store was "pretty full".

But he would not confirm if the dome-like structure emerging from the water at Marina Bay Sands is Apple's third flagship store here - as reported by ST, citing sources, earlier this year.

Asked why Singapore needs a third store, he said: "We try to look at where people are and where people live and arrange the Apple stores where it's reasonably convenient to go to."

Singapore is a popular tourist destination, he added.

Mr Cook also posted on Twitter a picture of himself eating chwee kueh, a type of steamed rice cake with preserved radish, with local iPhone photographers at Tiong Bahru Market.

In a Facebook post on Wednesday evening, PM Lee - who met Mr Cook - wrote about Apple's long ties with Singapore and how the tech scene has evolved since he previously met four years ago.

Apple has been in Singapore for almost 40 years; its printed circuit boards for the Apple IIe and the candy-coloured iMacs were made here decades ago.

"While Apple no longer manufactures devices here, many Singaporeans work in Apple locally and around the world, and many more are fans of their gadgets," PM Lee added in his post.

Over the last five years, Apple's headcount here has doubled. The tech giant now hires some 3,200 people, one-third of whom are retail staff. The remaining two-thirds comprise sales, marketing, communications, finance and research and development personnel.