PlayStation 5 hands-on in Singapore: The new DualSense controller is a game-changer We can’t all be JJ Lin and claim to be the first in Asia to lay our hands on the PlayStation 5.

Nonetheless, we did lay our hands on the next-gen gaming console earlier this week when Sony invited us to a closed-door media preview to see what the fuss is all about.

Even after seeing it in photos and videos for months (and ample warnings by tech YouTubers abroad), nothing can really prepare you for the size of the PS5 console itself. This thing is massive. Like comically huge.

This big boy is officially the biggest home console ever made, which raises some concern about how cumbersome it would be to fit it in a standard TV console, even when positioned on its side.

In real life, the PS5’s space-age design language certainly looks attractive with its white-and-black colour scheme and curvy lines. The new DualSense controller (more on that later) sports the same aesthetics with the matte-white plastic feeling great in the hand. Size-wise, it’s slightly bigger than the PS4 controllers, but still fairly light — though I would have liked a little bit more heft.

I’d say it's more reminiscent of an Xbox controller or one of those third-party pro controllers than the PlayStation DualShock controllers of old. 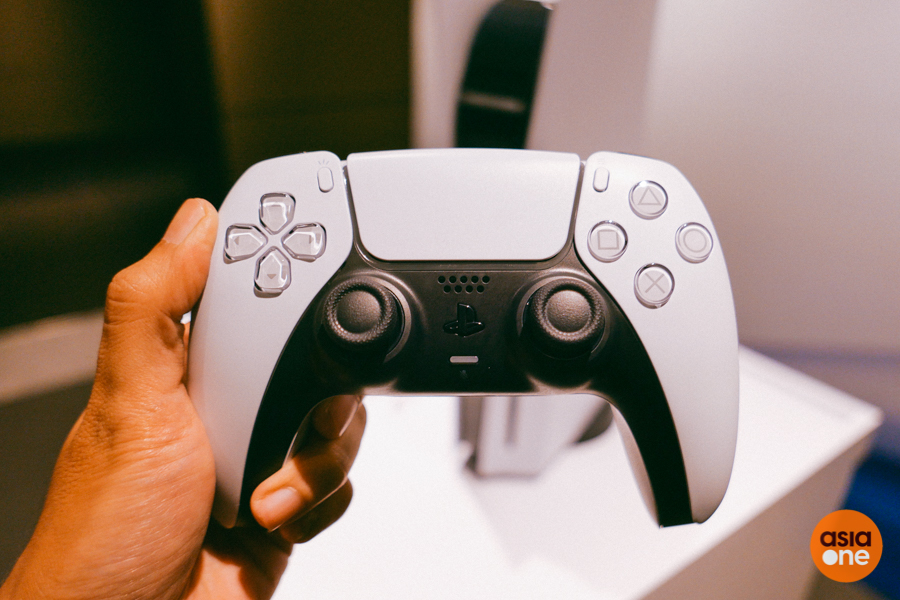 The closed-doors event had us play three game demos— Sackboy: A Big Adventure, Astro’s Playroom, and Square Enix’s platformer Balan Wonderland, which feels more like a kiddy Nintendo Switch title. They’re all casual games, so we weren’t able to really experience the true processing power of the PS5 with rigorous AAA titles. 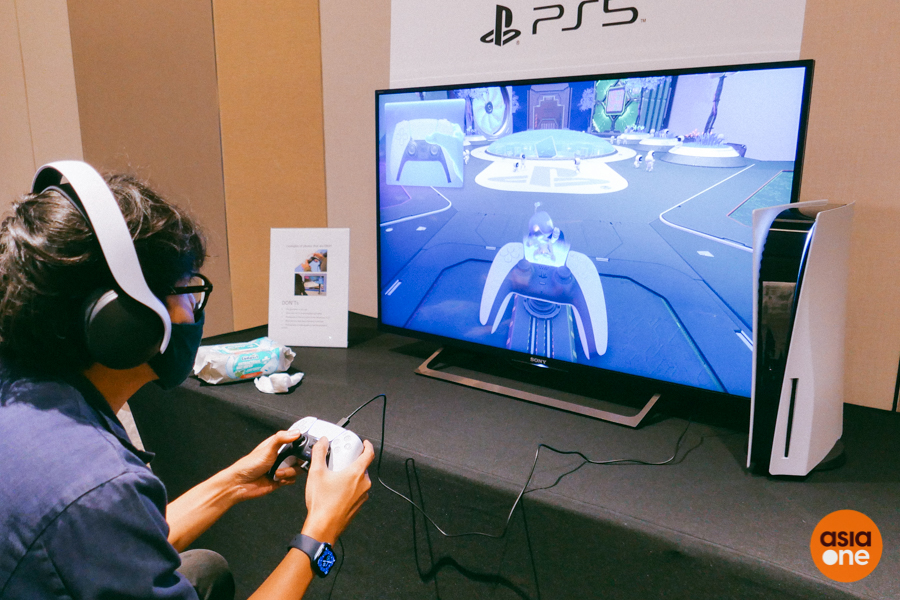 All three games ran smoothly with no glimpse of any loading screens, but it’s too soon to say how fast the console is because, again, these are basic entry-level games. The console itself ran quietly, though I’d be interested to see if it’ll sound like a fighter jet taking off in my living room (my ageing PS4 really does that) when running demanding games.

Sony is still pretty guarded about the PS5’s user interface, so we couldn’t really talk much about the pre-release build. The company has already shared a first look at the new user experience, anyway, so you can take a gander at that.

Now, the question that everyone might be wondering is what makes the PS5, Sony’s leap into the future of gaming, so special? After spending an hour getting up close and personal with the console, I’m hedging my bets on the new DualSense controller.

Where older PlayStation controllers just have simple motors in them to give a kind of rumbling, tactile feedback while playing, the new ones take that physical sensation to a whole new level. The haptic response offered in the new gamepad feels unreal, in that every little thing you do in-game has an accurate sensation. 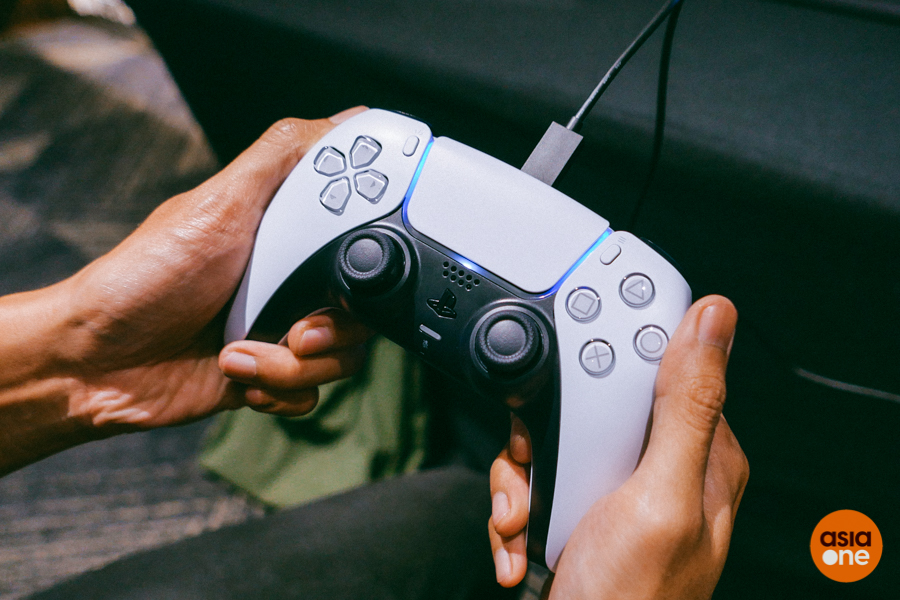 It all boils down to the new motors within the DualSense. Game developers now have a monumentally precise degree of control in the type of physical feedback, including the strength, speed, and frequency of the vibrations.

And it makes a whole lot of difference! Astro’s Playroom — which is included in every PS5 console — is a fun, goofy showcase of the new controller’s capabilities, and the big jump in haptic experience can immediately be felt.

Somehow, through some technological sorcery, the controller captures the exact simulation of sensations when Astro’s doing things like skating on ice, slamming into the ground or stepping on glass surfaces. 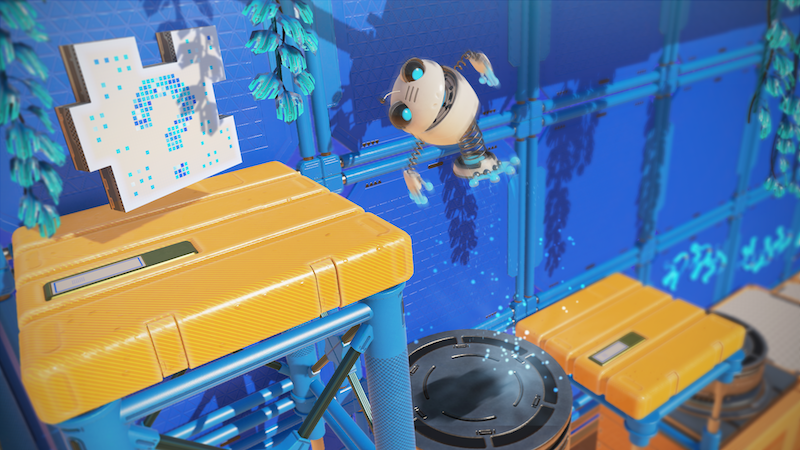 Then there’s the adaptive feedback on the controller’s triggers, which is a much bigger deal than you might think. Known as the L2 and R2 buttons, they feel absolutely astounding to play with thanks to the resistance added within. The triggers actually push back against your fingers, so you can really feel the weight and force of the gameplay.

One portion of Astro’s Playroom had the little robot putting on a suit that can jump around by way of a coiled spring — the feedback in the trigger simulated the sensation of pulling back on spring, which is pretty damn immersive.

In theory, developers could do the same magic with other sensations, like pulling back a bowstring or putting the pedal to the metal in racing sims. Just imagine what it’ll feel like when you’re playing Spider-Man: Miles Morales and he does his bioelectric Venom Blast thing.

That was pretty much the big takeaway in our first look and feel of the PS5. We’ll have to wait for the console to drop in Singapore on Nov 19 to find out more about the next generation of gaming.