The New Masters: How auction houses are chasing crypto millions A visitor takes a photo in front of digital work Untitled (Self-Portrait) by Andy Warhol and digital artist Mike Winkelmann, known as Beeple, at the Digital Art Fair, in Hong Kong, China, on Sept 30, 2021.
PHOTO: Reuters
PUBLISHED ONNovember 09, 2021 4:50 AM

LONDON - Little could James Christie have known some 240 years ago, as he sold masterpieces by Rembrandt and Rubens to Catherine the Great, that his auction house would one day offer virtual apes to a crypto company for over $1 million (S$1.3 million).

Nor would Sotheby's founder Samuel Baker, auctioning hundreds of rare books for about $1,000 in 1744, have envisioned selling a copy of the original source code for the web, as a non-fungible token (NFT), for north of $5 million.

"Everybody wants to sell an NFT," said Cassandra Hatton, Sotheby's global head of science and popular culture. "My inbox is just absolutely clogged."

Sotheby's has sold $65 million of NFTs in 2021, while arch-rival Christie's has sold more than $100 million of the new type of crypto asset, which uses blockchain to record who owns digital items such as images and videos, even though they can be freely viewed, copied and shared like any other online file.

Those sales figures for the world's leading auction houses account for about 5.5 per cent of their contemporary art sales, according to Art Market Research data. It's a leap, given NFTs have only taken off in the last year.

Many buyers are from a new category of wealthy clientele: people who made their fortunes through cryptocurrencies, art specialists involved in NFT sales at major auction houses told Reuters. In a Sotheby's online NFT sale in June which brought in $17.1 million, nearly 70 per cent of the buyers were newcomers.

Indeed the three NFTs of crude cartoon apes which were snapped up for 982,500 pounds ($1.8 million) at Christie's in London last month were bought by Kosta Kantchev, who runs a cryptocurrency lending platform called Nexo.

The cartoons, from a set called Bored Ape Yacht Club, were Christie's first NFT sale in Europe and were offered up at its biggest in-person auction since the start of the pandemic.

In a sign of the changing times, Kantchev was rubbing shoulders with art collectors bidding on works by David Hockney, Jean-Michel Basquiat and Bridget Riley.

"On one hand, there were the people in suits in the front, and on the sides, there were people on the phone getting semi-anonymous bids," said Antoni Trenchev, who runs Nexo with Kantchev. "Then in the back, there were entrepreneurs and people from the crypto industry bidding – they don't come in suits."

Trenchev said their purchase of the apes was a bet that the market for NFTs would continue to grow, fuelled by the rise of the "metaverse" of online worlds where virtually anything can be bought or sold, from avatars and clothes to land and buildings.

Indeed digital art is just one part of the explosive sales growth for NFTs, which topped $10 billion in the third quarter of this year alone, up eightfold from the previous three months.

"We're working on exciting new financial tools for NFTs that will stimulate adoption of the asset class," Trenchev said, referring to the possibility of Nexo selling financial products based on NFTs as the underlying asset.

They're not the only ones betting on the metaverse. Facebook - a company worth almost $1 trillion that has rebranded as Meta on the calculation that increasingly-immersive virtual environments and experiences are the future.

Whether Mark Zuckerberg is prescient or not remains to be seen. The NFTs boom is nonetheless dragging auction houses hundreds of years older than Silicon Valley into a new world.

To hunt their new breed of buyers, big auction houses are taking to social media.

Noah Davis, head of digital art sales at Christie's, said his potential NFT buyers were happy for him to ditch the formalities normally involved in attracting art collectors, adding that he recently negotiated a contract over the messaging platform Discord and registered buyers for an auction via Twitter. 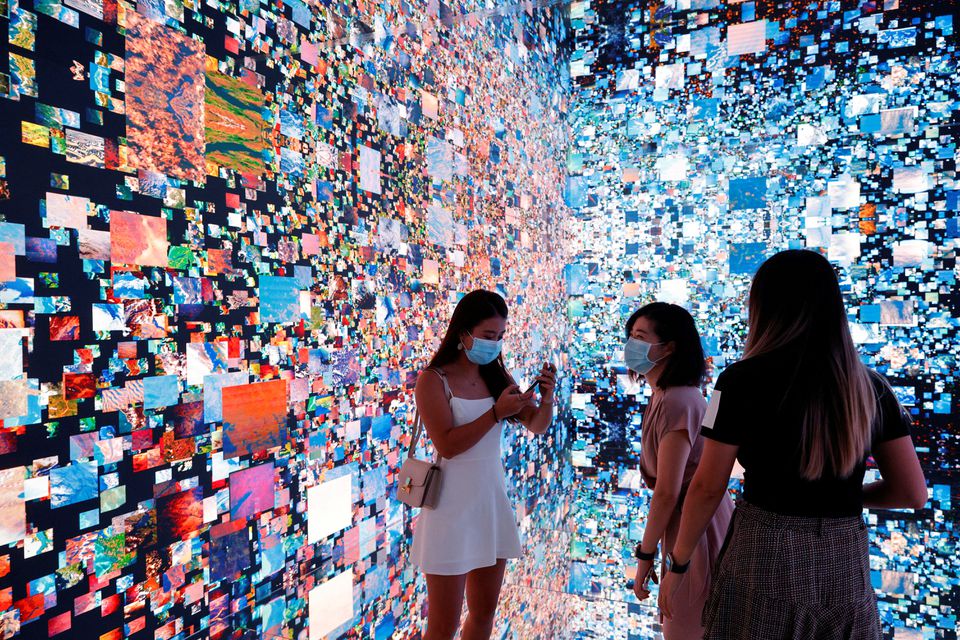 "That's where it happens, that's where client services are done," he told Reuters, adding that it was remarkable how much quicker this process compared with traditional methods.

In another big digital shift, auction houses are often sourcing NFTs directly from the crypto artists – in many cases, little-known, pseudonymous figures.

"For me the biggest surprise is that the artists want to work with the auction houses directly. We've always been in the secondary market," said Rebekah Bowling, senior specialist of 20th century and contemporary art at Phillips, another global auction house.

"The traditional structure has been upended," said Bowling, who uses Twitter and Clubhouse to reach artists.

Yet these newcomers to an untamed metaverse also confront a new sphere of risk, particularly around cryptocurrencies, which crypto-rich buyers often prefer to use to pay for NFTs.

"These products could be securities and when a gallery is picking up an artist or product they better do their own due diligence," he said, adding that money laundering via cryptocurrencies was a "known fact."

Sotheby's did not comment on its KYC or AML procedures. Christie's said its KYC and AML standards in NFT sales were the same as those for physical artworks, though declined to go into detail. Phillips said it checked that buyers had sufficient funds in their crypto wallet.

Another issue is that while NFTs are marketed as a way of indisputably recording ownership of a digital asset, problems can still arise.

A Sotheby's NFT sale in June - in which a buyer spent $1.5 million on what was marketed as the first-ever NFT, a simple geometric animation called "Quantum" by Kevin McCoy - was complicated by a claimant emerging saying they owned an earlier, original version of the same NFT, the buyer and claimant told Reuters.

They said the dispute over which could truly could be called the first NFT meant the transaction was delayed, and blockchain records show the purchase was not transferred until several weeks after the sale.

Separately, after a Sotheby's auction of an NFT representing the World Wide Web source code, which fetched $5.4 million, observers noticed errors in the included video version of the code.

Sotheby's did not respond to a request for comment on either sale.

Pablo Rodriguez-Fraile, a Miami-based collector who buys both NFT and physical art, said the steps that auction houses had taken into the digital sphere had been very positive.

"I think they're normalising the ecosystem, and I think that very soon they'll find the right path," he said.

"But the curation challenge and the technology challenge are major ones," he added, referring to auction houses acting as galleries by handling primary sales.

On Tuesday, Christie's will sell a new NFT by Beeple, the artist whose NFT fetched $69 million at Christie's in March. That was the first time a major auction house had sold a piece of art that does not physically exist.

However this time round his work will be sold in physical, as well as NFT, form. At Christie's at least, the real world still holds some appeal.