Make TraceTogether tokens mandatory only after distributing them to everyone Distribution will now be staggered, one constituency at a time.
The Straits Times

SINGAPORE - Are there enough TraceTogether contact tracing tokens for everyone? Did the Government put the cart before the horse when it announced mandatory use of the system for checking in at all public venues even before everyone had the chance to collect their token?

It is unavoidable that these questions should be asked after residents formed long queues to pick up the tokens, prompting a sudden halt in their distribution.

On Oct 20, the authorities said using the TraceTogether app or token to check in would be made mandatory at cinemas, restaurants, workplaces, schools and shopping malls by the end of December, as Singapore prepares to enter phase three of its reopening.

Such premises will need to progressively roll out the new national check-in system, starting with cinemas from Monday.

Cinemas will also have to fully implement TraceTogether for checking in much earlier, by Nov 16.

The new system will replace the current familiar one that involves scanning SafeEntry QR codes with phone cameras or the SingPass mobile app, or bar codes on NRICs.

Last week, only about 400,000 TraceTogether tokens had been collected. But demand spiked right after news about their mandatory use went out. Those planning to catch a movie must be token or app-ready by Nov 16.

Children and the elderly, who commonly do not have a smartphone or the latest device for using the app, will need a token.

That is, if they can no longer scan the bar codes on their NRICs or student concession passes. 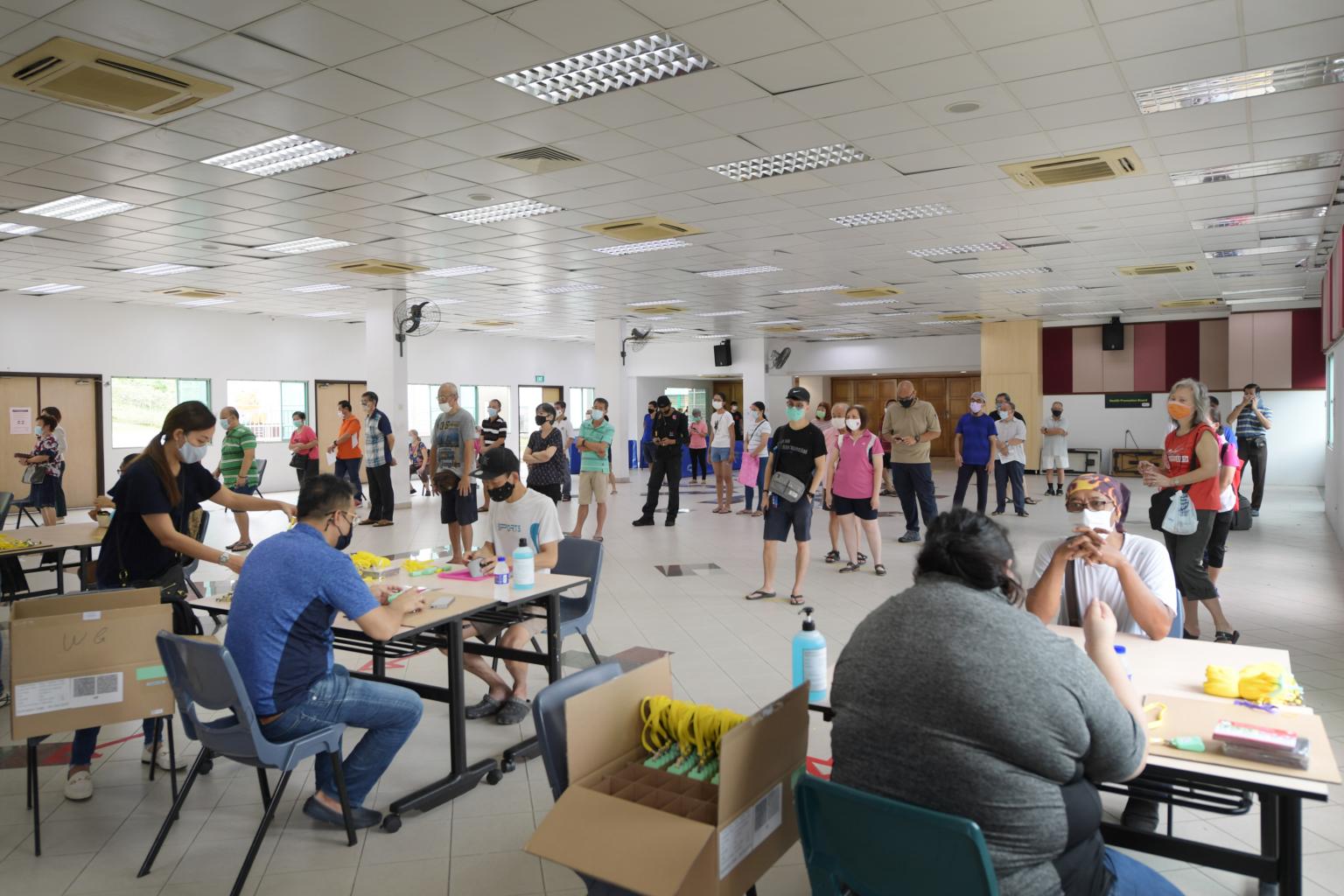 All residents aged seven and above, including pass holders, are entitled to one token.

As expected, long queues formed last Saturday at some of the 38 community centres which served as distribution centres for the tokens. Some people had to queue for about 45 minutes.

The next day, Minister-in-charge of the Smart Nation Initiative Vivian Balakrishnan urged the public not to rush, saying there would be more than enough tokens.

For the first time, the public was told about plans to give out 2.7 million tokens, and that production could increase depending on demand. Had this information gone out earlier, the public's fears of a supply crunch would have been put to rest. 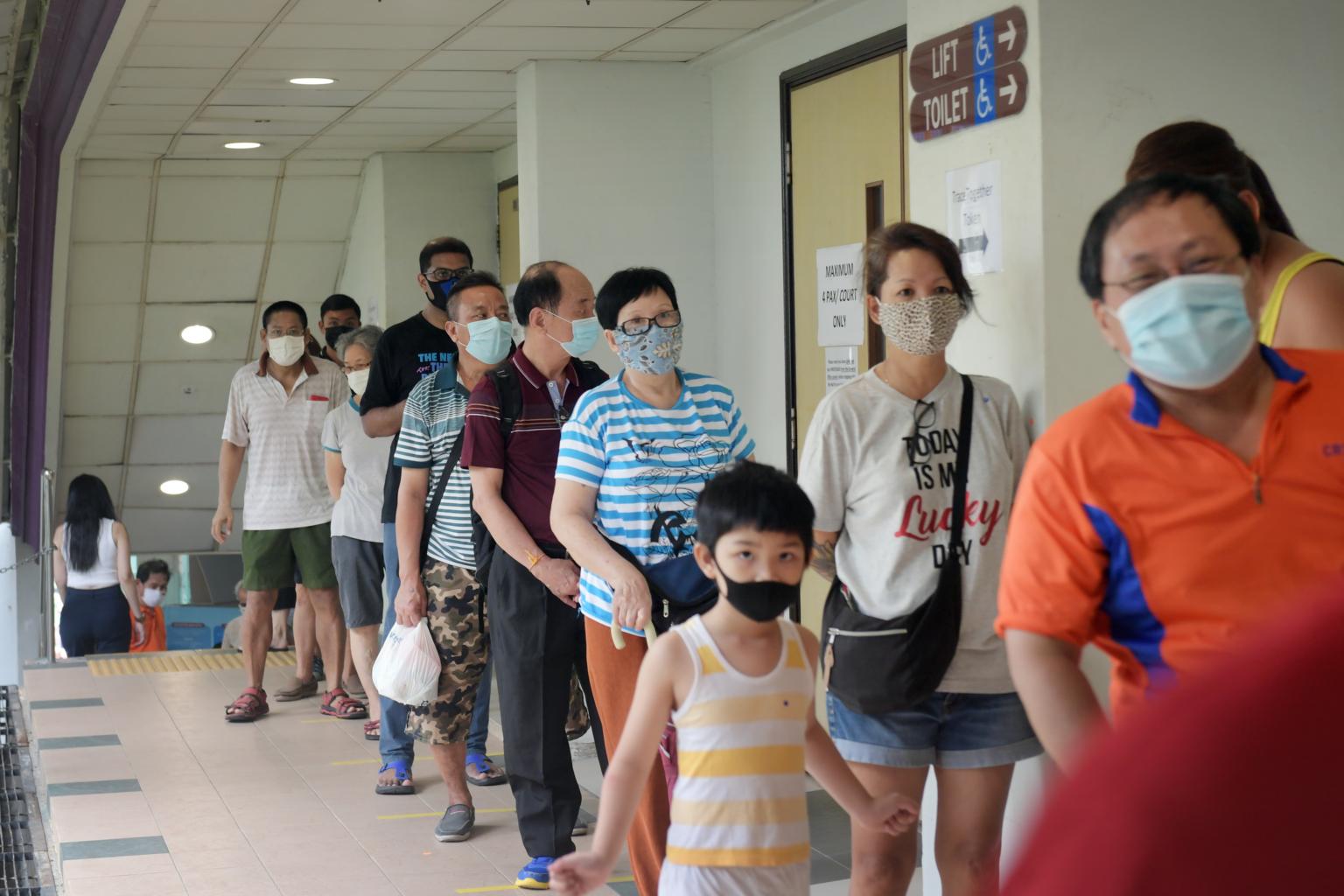 But that was not the end of the story.

On Wednesday, the Smart Nation and Digital Government Office (SNDGO) did a turnabout and suspended token collection for one day at all 38 community centres to reboot its distribution system.

Under the previous plan, all 108 community centres islandwide were set to start token distribution by the end of next month. All of them would have catered to walk-ins.

But this will no longer be the case. Distribution will now be staggered, one constituency at a time, "to better match demand and to avoid long queues", said the SNDGO.

Marsiling Community Club was the first to open yesterday for residents in that constituency to collect their tokens.

However, did this phased approach get rid of the queues?

When The Straits Times arrived at the club at 9.45am yesterday, there were already about 100 people in the queue.

One proven way to avoid overcrowding is to follow what local telcos have done in the past for Apple iPhone and Samsung Galaxy phone launches.

Telcos registered buyers online and gave them a time slot to collect their phones at designated collection points.

They even deliver purchased phones to people's homes nowadays.

And now, for the most important question: Are there enough TraceTogether tokens for everyone?

Even if there is no supply crunch, the Government could have done better in coordinating the timelines for token distribution and mandatory TraceTogether roll out at venues.

For instance, after all cinemas here have rolled out the new check-in system by Nov 16, the only way to enter will be to use the TraceTogether token or app.

But Marine Parade, Chai Chee and Mountbatten residents - especially children who can only get their hands on a token from Dec 14 - according to the full schedule on the TokenGoWhere website - will not be able to catch a movie during the school holidays.

The Government should have given everyone who needs a token a chance to collect one before mandating its use for checking in at venues.

And it is not just the elderly and children that are affected by the new token requirement: Those who cannot bring their mobile phones into their workplace - for security or any other reason - will also most certainly need a TraceTogether token.